From Salt Lake City, we took I-80 northeast towards Wyoming, stopping for the night in Evanston, WY at Walmart to sleep and get supplies. 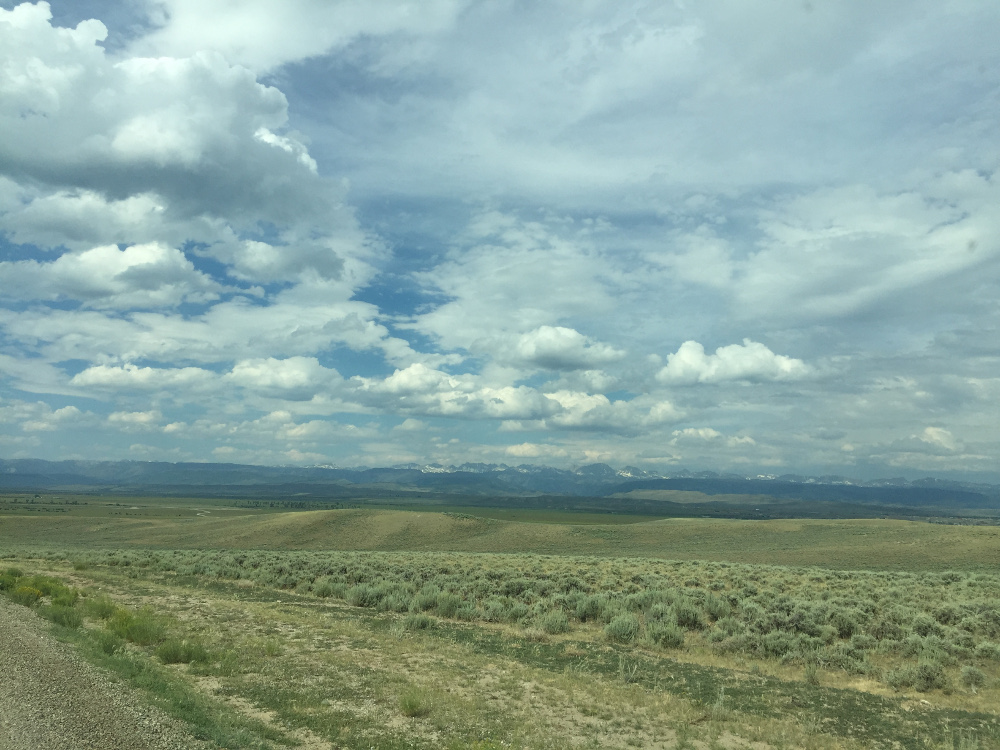 It took us a few hours to get up to Pinedale (small sagebrush town) the next day, where we had another stay through Boondocker's Welcome lined up. Jack, the owner of the property, greeted us and showed us where to park/where drinking water was located, but then recommended a free BLM primitive campground just a couple miles down the road, near the river. We decided to forego the convenience and internet at his place and take the solitude/scenic allure of the BLM campground. I'm happy we decided to do this because the area was really pretty, but alas was quite buggy which usually translates to not being able to be stationary outside for very long.
We had a gourmet hotdog dinner and tried to plan, and I read about how not to die of a bear attack in Yellowstone. 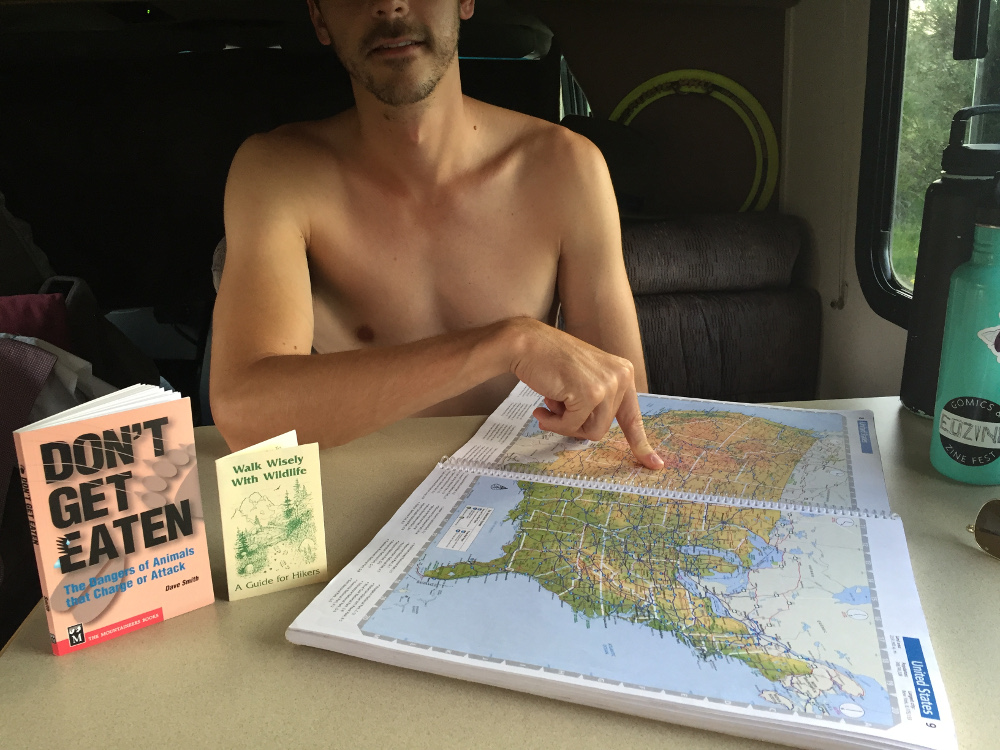 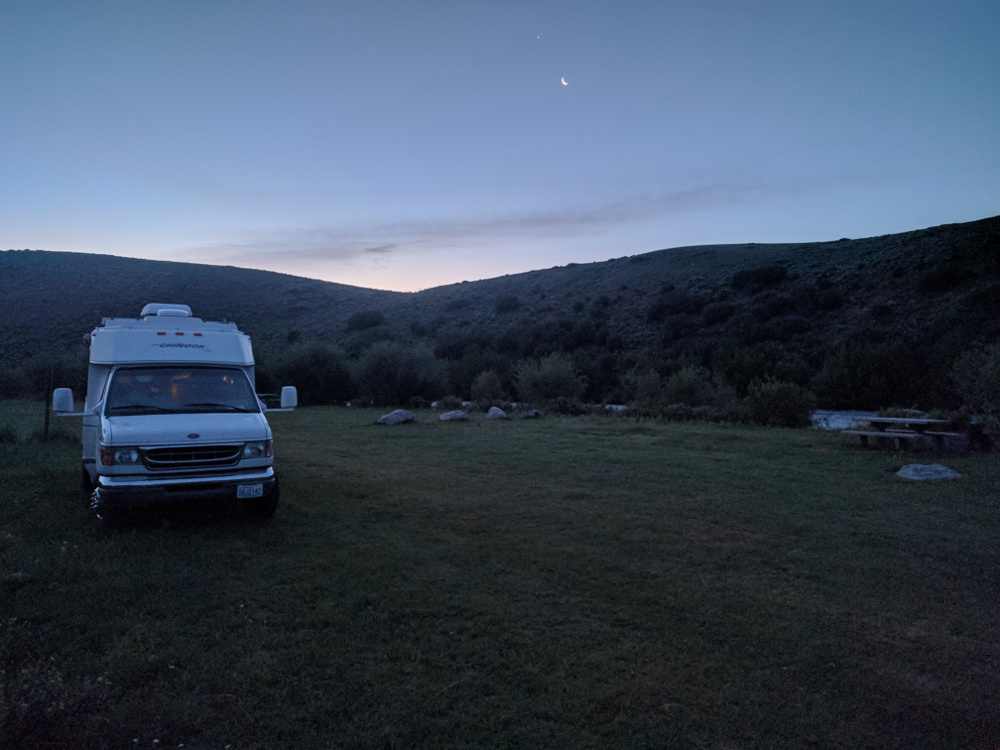 In the morning we awoke at 5am to get to Yellowstone asap, passing through beautiful small Bondurant and interesting Jackson, just as it was starting to wake up. We also drove through and stopped at a few lookouts in Grand Teton National Park, disappointing to have to rush into and out of but we were intent on making the most of the time we had in Yellowstone, for we had booked a campsite in the park for that night. 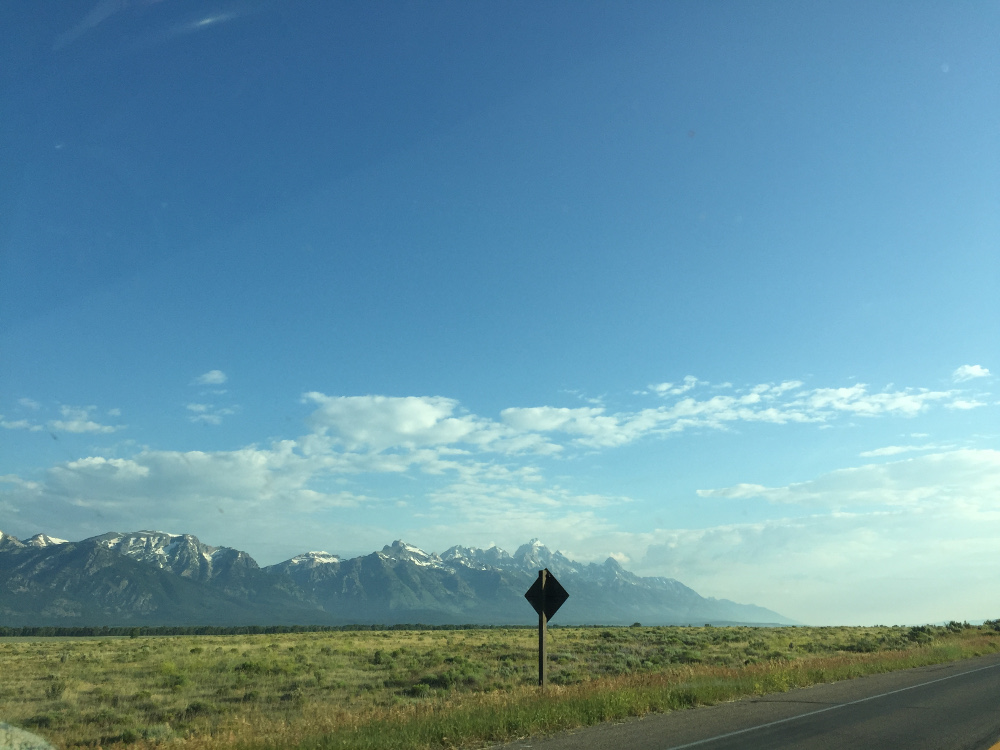 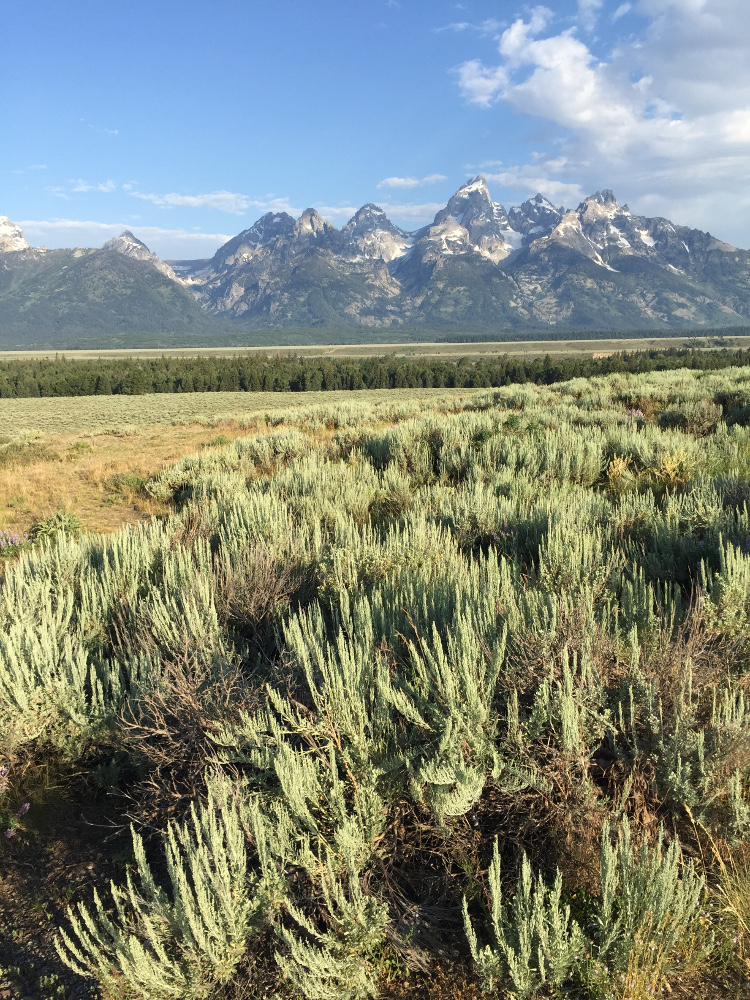 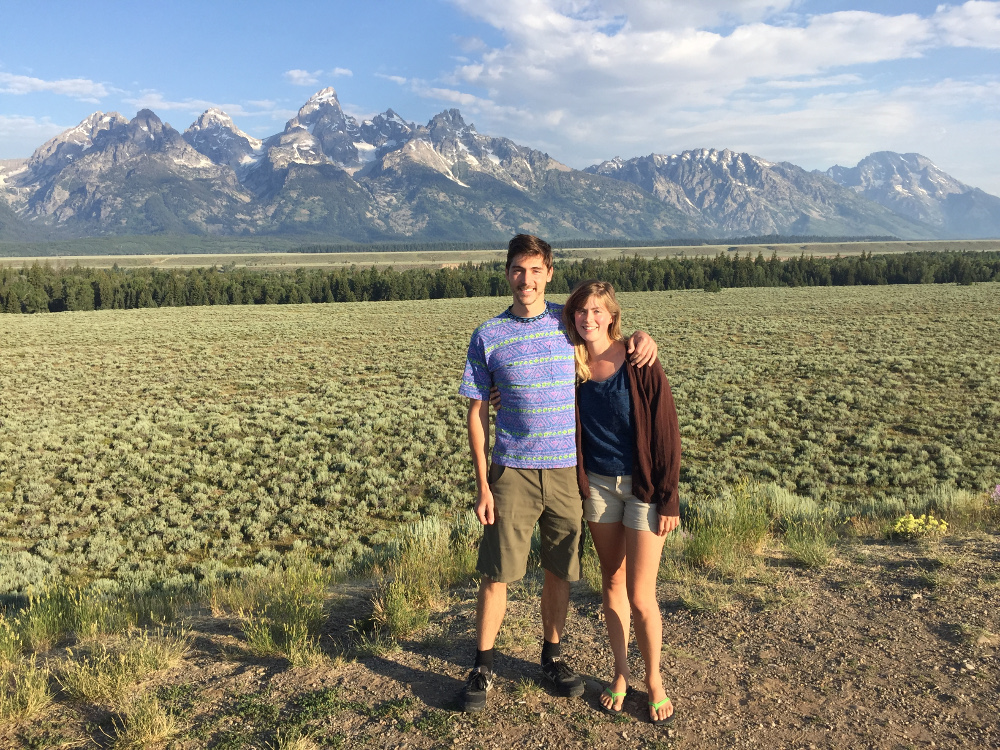 Our first stop in Yellowstone was Old Faithful, which did not disappoint.
Walking up to Old Faithful: 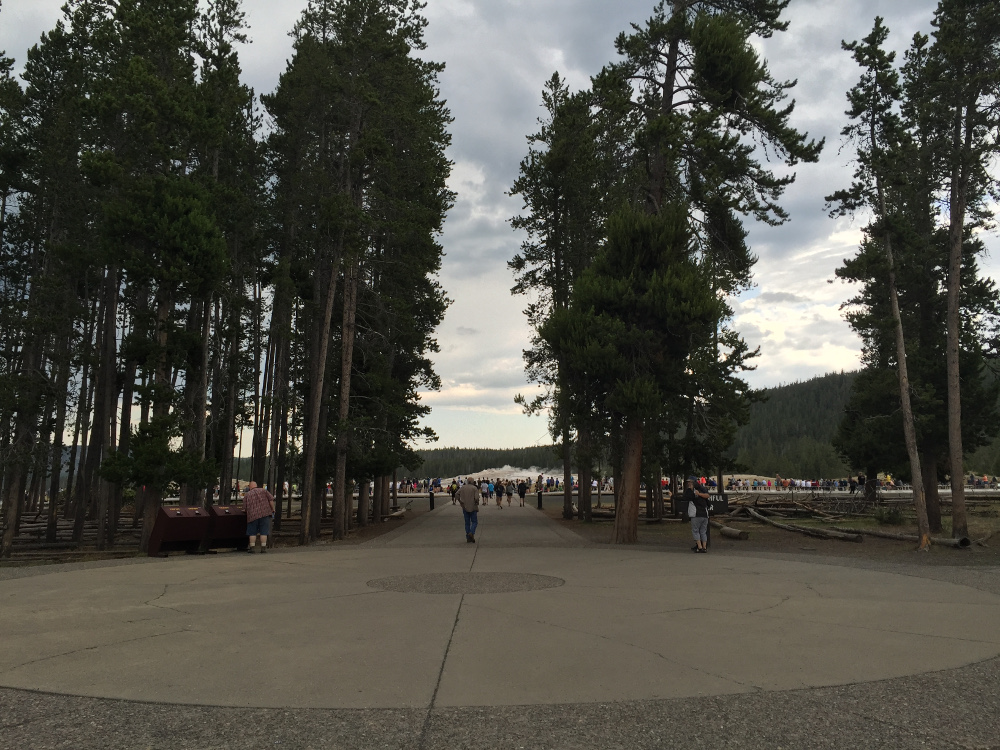 Honestly I knew almost nothing about Yellowstone going in (outside of Old Faith and wildlife) so discovering the large quantity of geothermic features near Old Faithful and in the various Basins of the park was really exciting. The boardwalks and walking paths made it easy to meander around, generally checking things out. 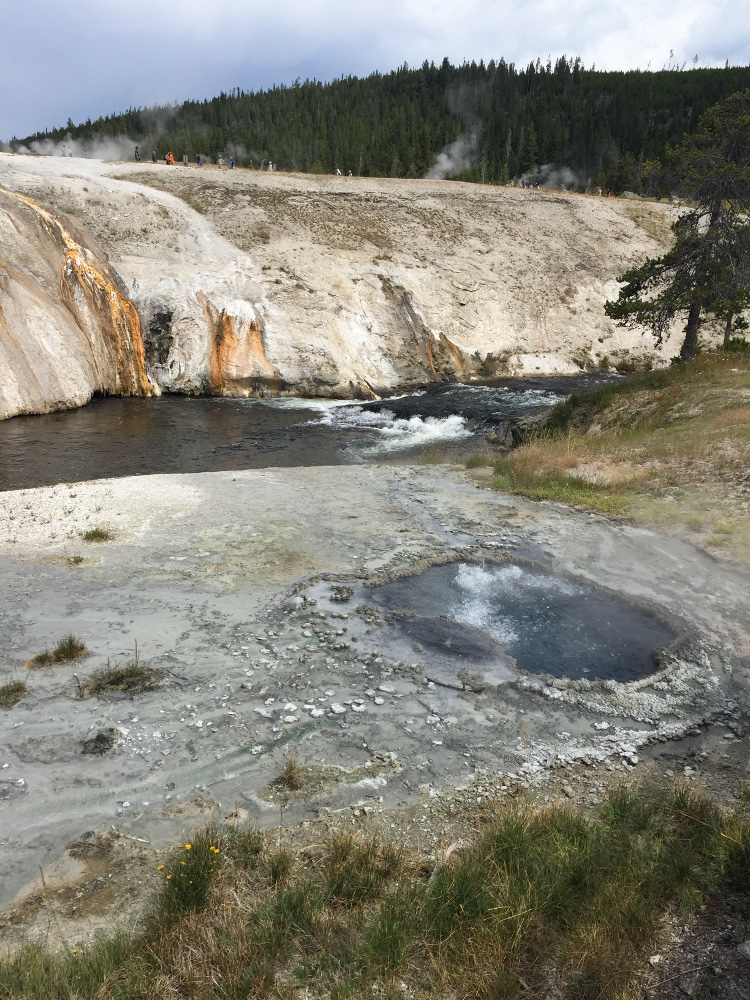 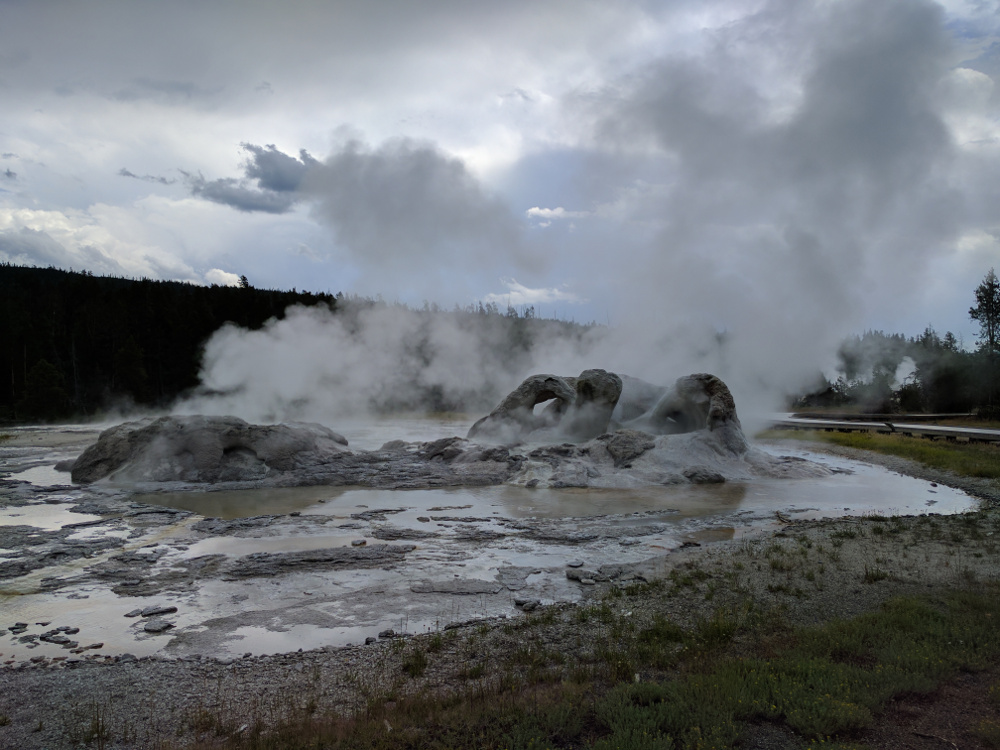 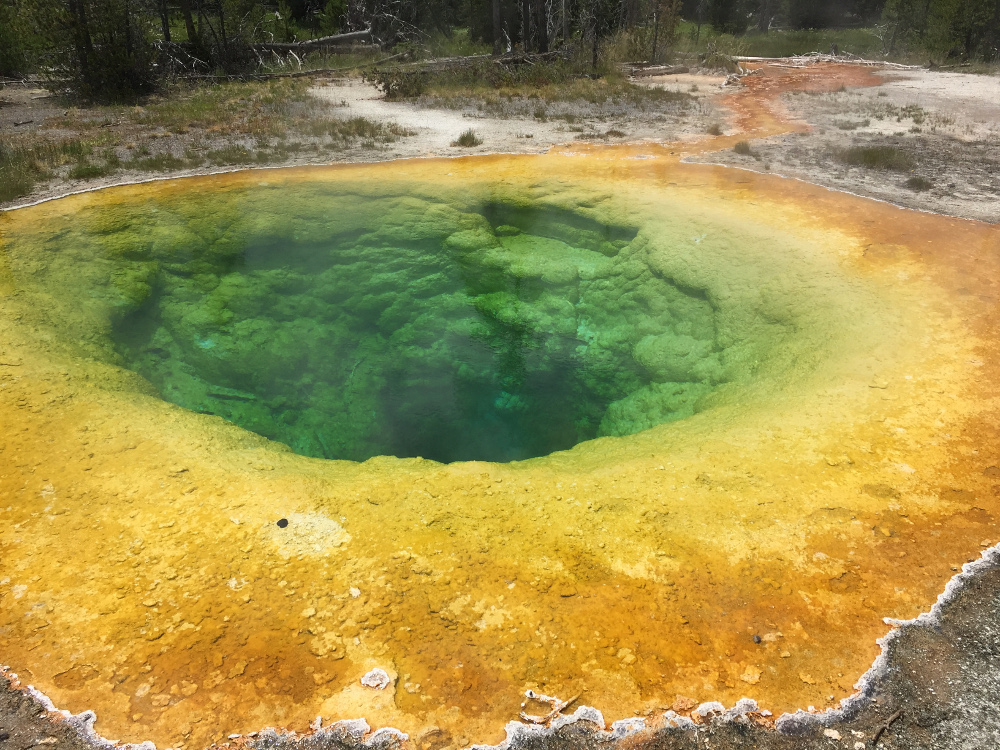 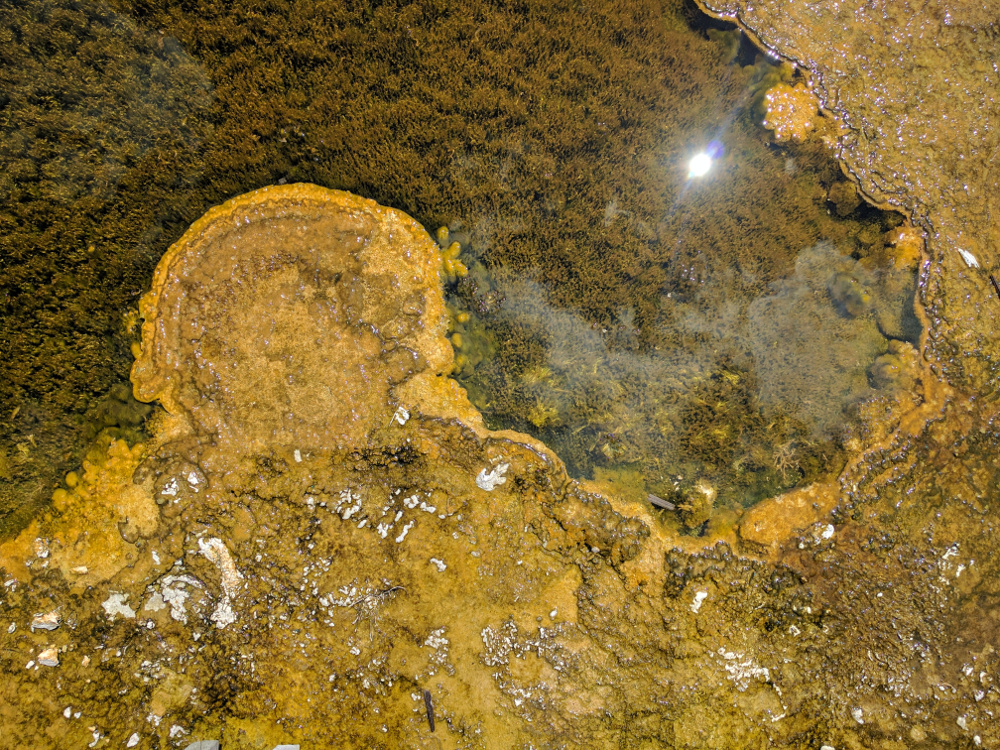 There was a small thunderstorm and rain shower, which actually felt kind of good after SLC's 100 degree weather. We probably spent about 2 hours walking near Old Faithful in the Upper Basin, then went into the Old Faithful Inn to sit down and find some water. Russ (my stepdad) had recommended we take a look and again, it did not disappoint. 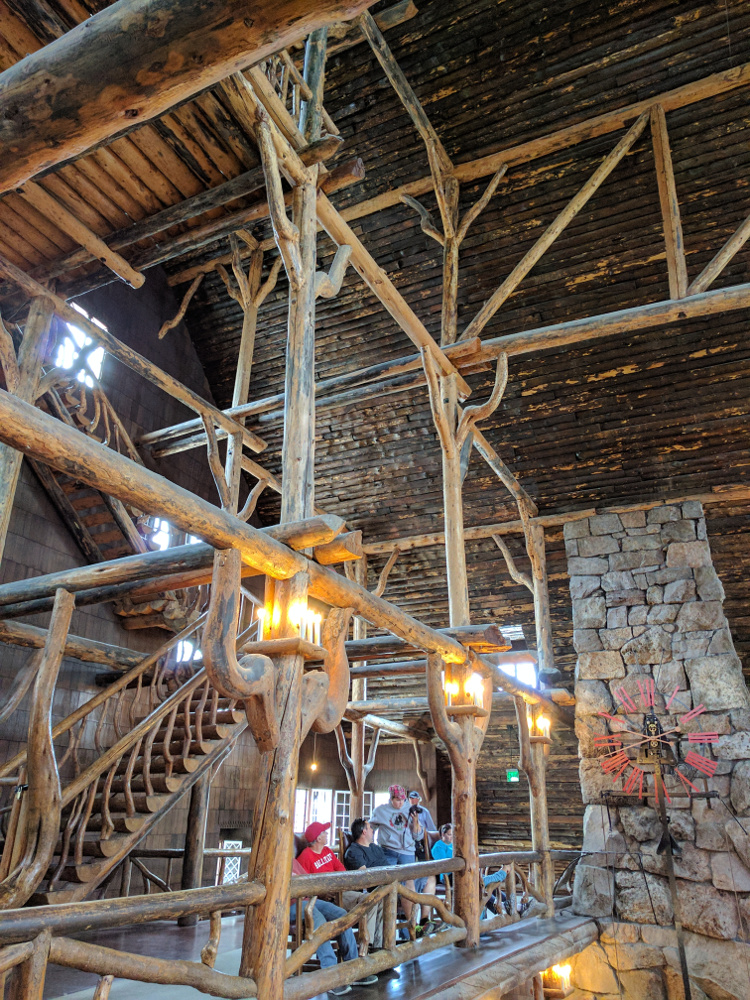 It is a beauty, but I only wish it could still hold some of the old magic from the early 1900's: an orchestra in the “crow's nest” (upper level of rafters) and dancing in the lobby. It was fun to imagine it during the holidays, like the hotel in White Christmas, but it also gave me a strong creepy Shining vibe.

From the Upper Basin we drove up through the Midway and Lower Basins, stopping to see the Grand Prismatic Spring area and Fountain Paint Pot, a collection of features that include burbling mud pits and a steaming valley. 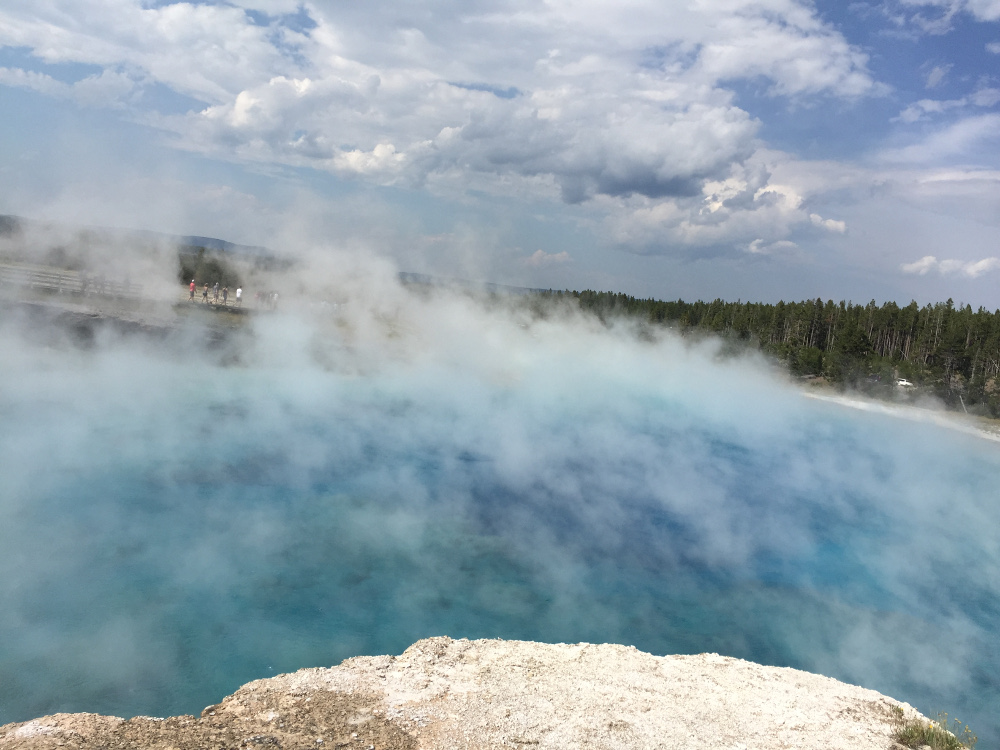 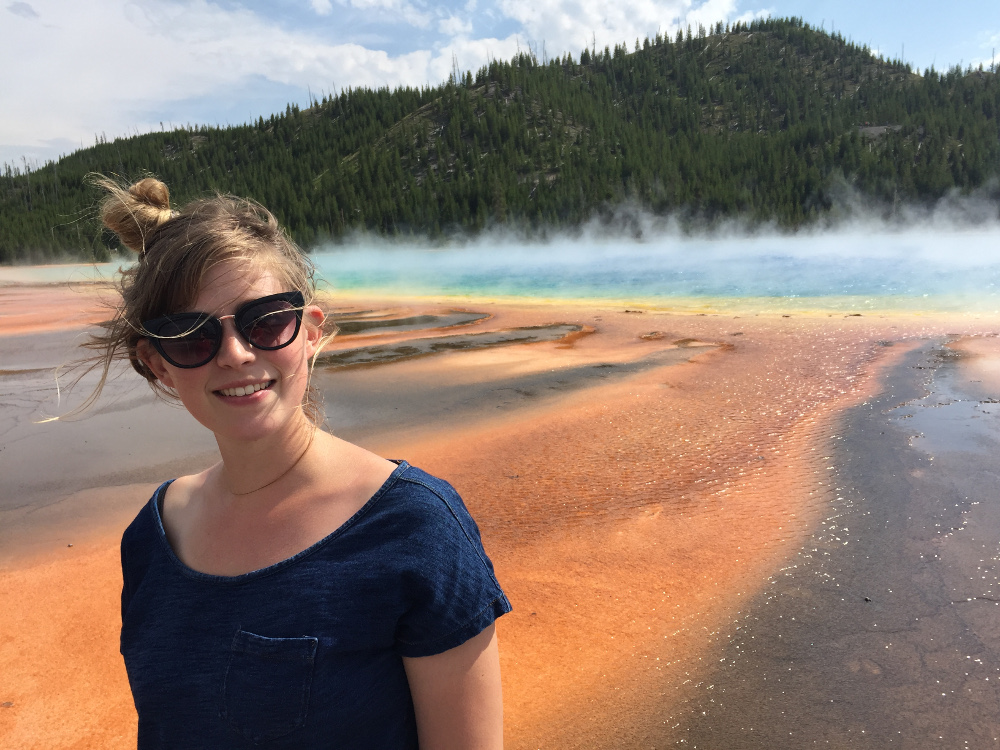 At this point I thought maybe we had exhausted our sulfur-air intake tolerance for the day but NO, not so much. We drove back down south towards our campground at Grant Village, stopping to take a bike ride down to Lone Star Geyser, a single spouting geyser in the woods. 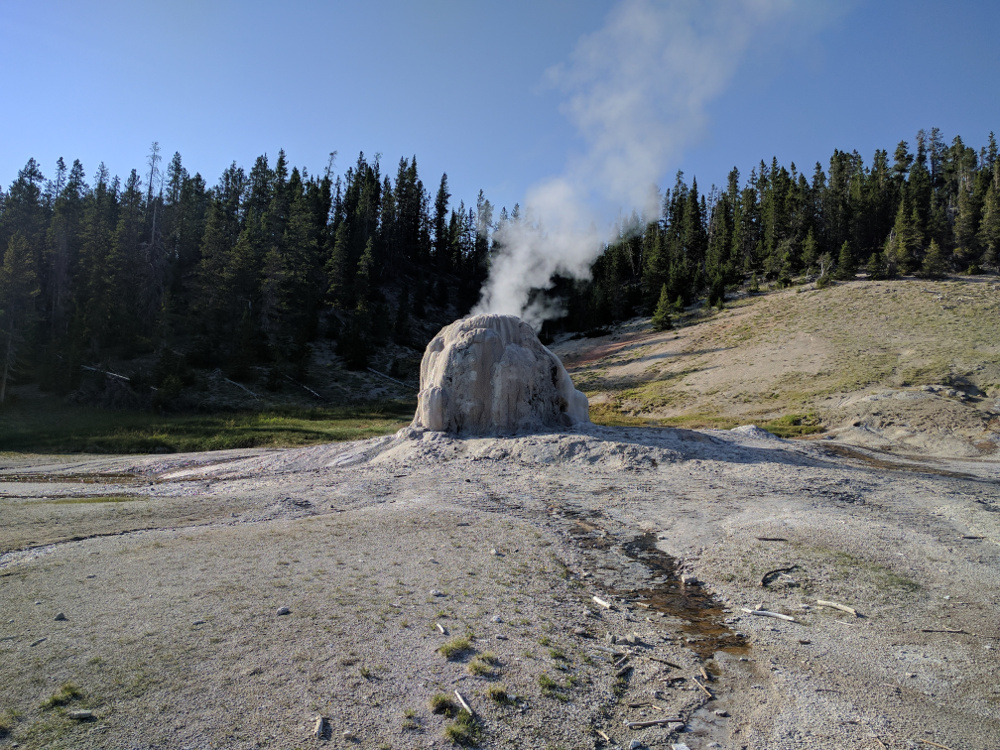 From there we made it to camp, only had time to eat and go to bed. It was a long day.

We got up early again the next day, about 5:30 in hopes of finding an open campsite in one of Yellowstone's first come first served campgrounds. After waiting in line for about 20 mins at one in Norris, we were told there was no room so we said, whatever, let's just see what we can while we're here and figure out lodging later. And that is how our second long Yellowstone day began.

Our first stop was a bike ride along the base of Bunsen Peak, a 4 or so mile ride through sagebrush prairie and pine groves. 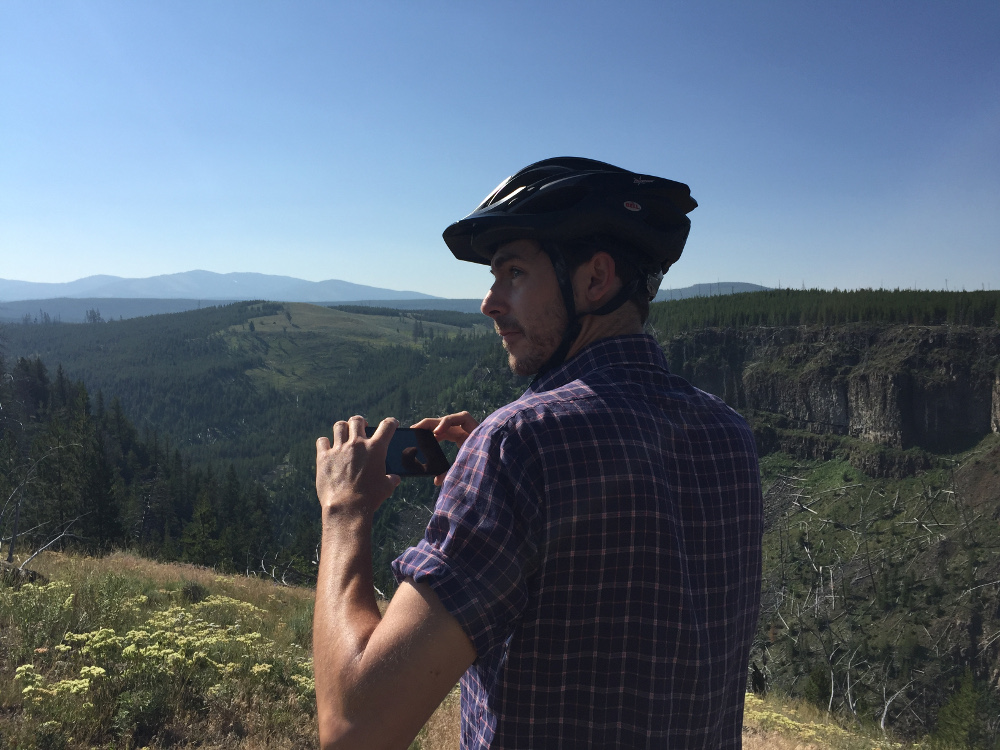 This basically looked like perfect grizzly country to me, and as we were starting the trail I overheard a hiker telling his group “and this is the other trail where I came across a grizzly.” This was good fuel for my paranoid mind. 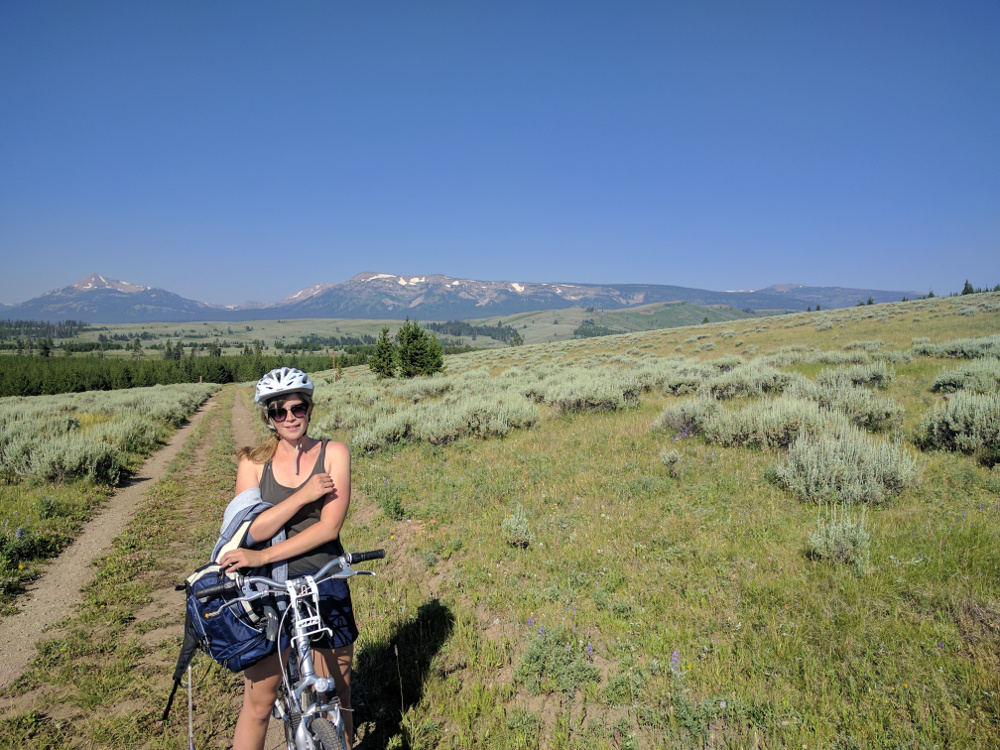 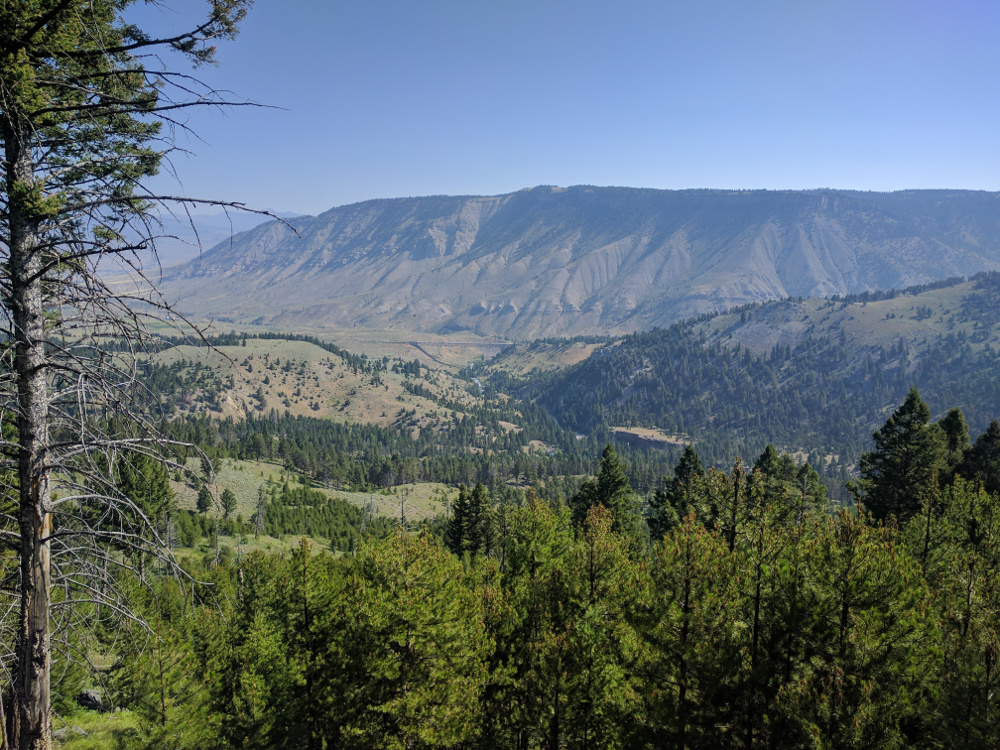 The trail offered some distractions: scurrying gophers/rodents, switchbacks and sweeping views of the valley, Osprey Falls, and eventually Mammoth Hot Springs area as we made it to the other side of Bunsen Peak. It was steep going down and we had to walk our bikes up on the way back.

After the ride we drove up to Mammoth to see the springs and for lunch (cheap but crappy burger). More winding boardwalks, steaming springs and beautiful, alien landscapes. 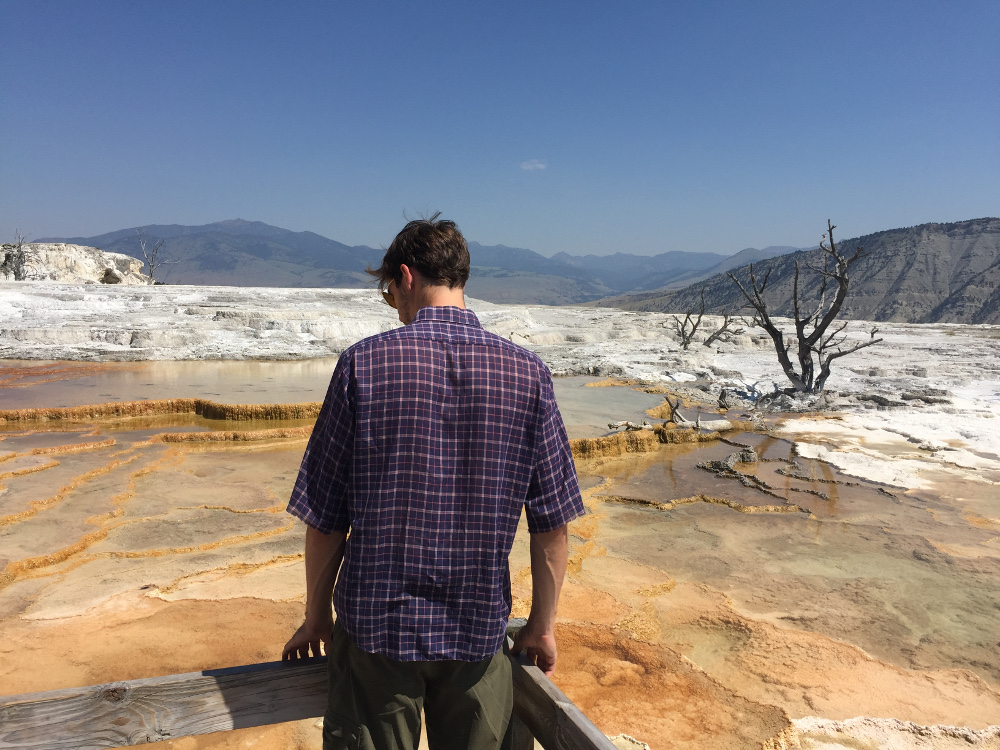 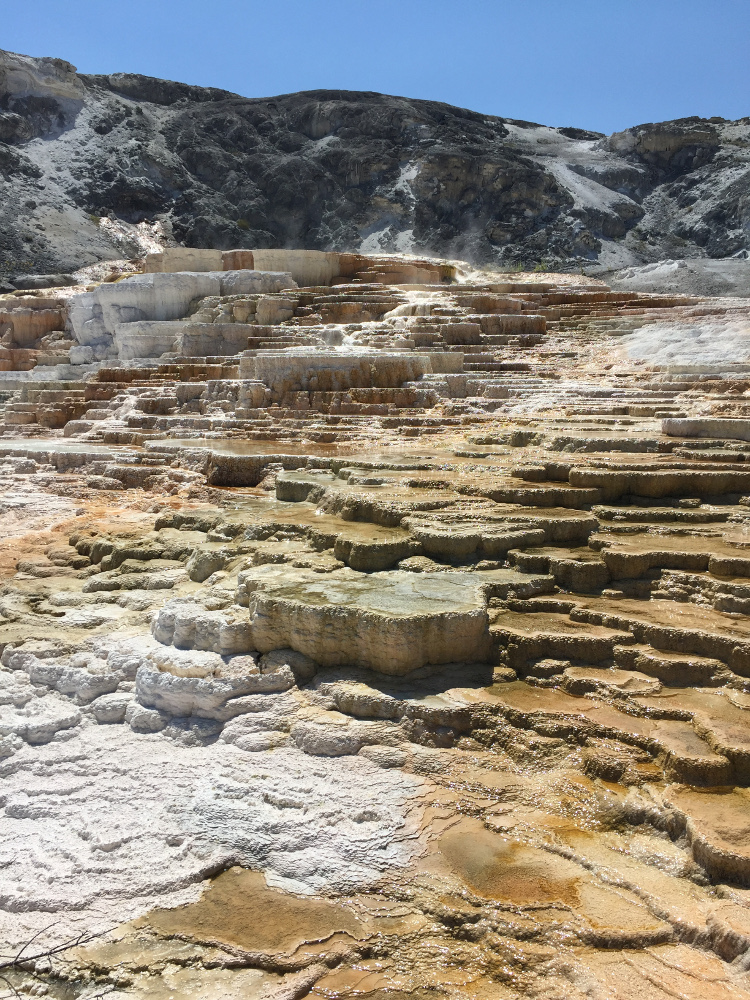 Back on the road, we stopped at one turnout to see the Petrified Tree, a relic of Redwood trees that once grew in the Yellowstone area. 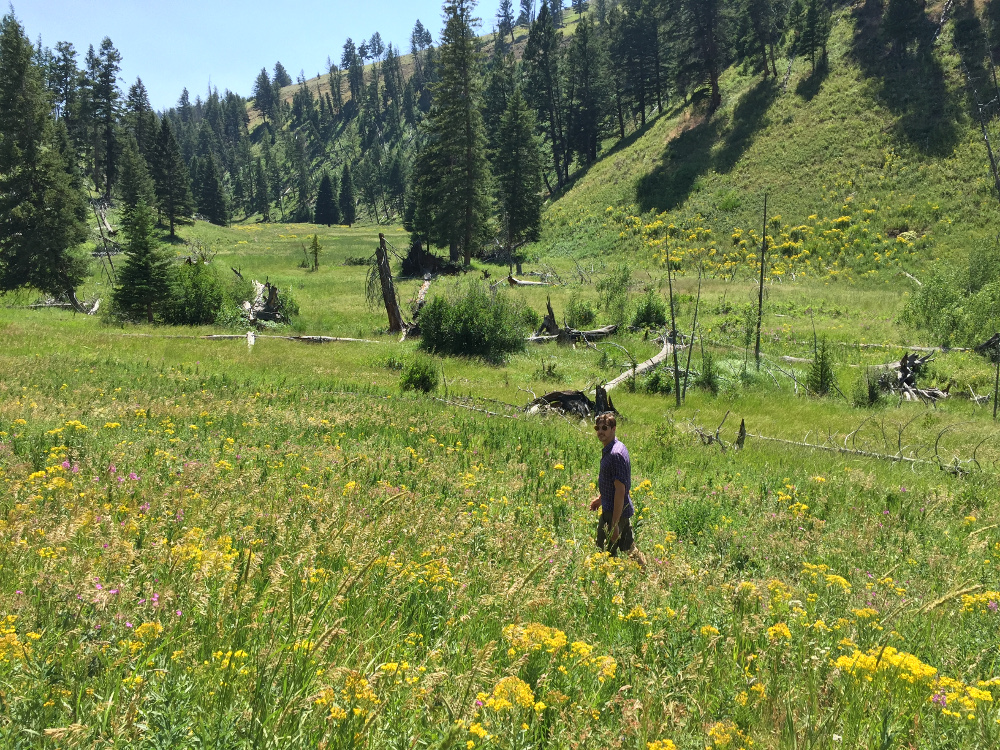 This one had been petrified after an earthquake and mudslide. At one point there were other petrified Redwoods but tourists in the 20th century chipped away at them, for souvenirs, until nothing was left. As Trump would say: “sad”. This one too showed the scars of being hacked at, more or less looking like a stump.

Driving from the Petrified Tree, we made a pit stop at Tower-Roosevelt area to get more water and possibly ice cream. On the way out, we picked up two young female hitchhikers who were from Poland and Slovakia, working in the park for a few months this summer. They sat in the back and I asked them questions about working in Yellowstone, where else they were going in the US and what they thought of it all. They asked us about our trip, what we did for work and whose guitars were those sitting in the back. It was fun. After dropping them off in Canyon Village, we went to Artist's Lookout at Grand Canyon of Yellowstone, an immensely impressive rocky valley with silvery, cascading waterfall. 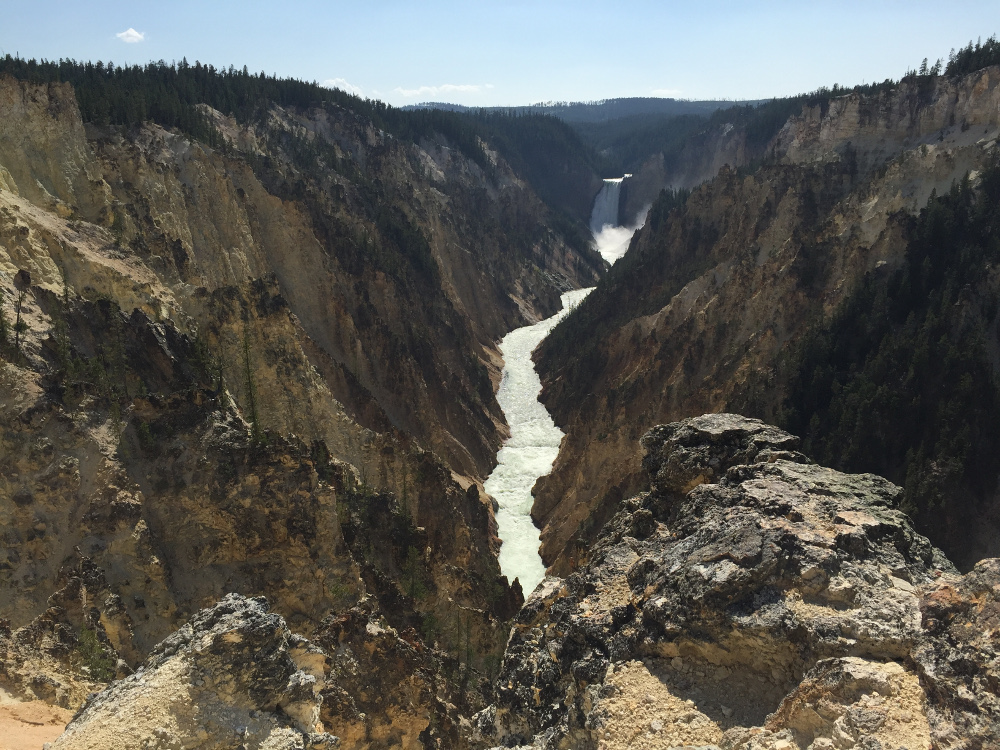 I did not expect all of it. It was very crowded with fellow tourists but the awesome beauty of the vista allows you to transcend that annoyance for a few moments.

From there we continued driving through the park, getting stopped by a herd of crossing buffalo at one point. They're HUGE! 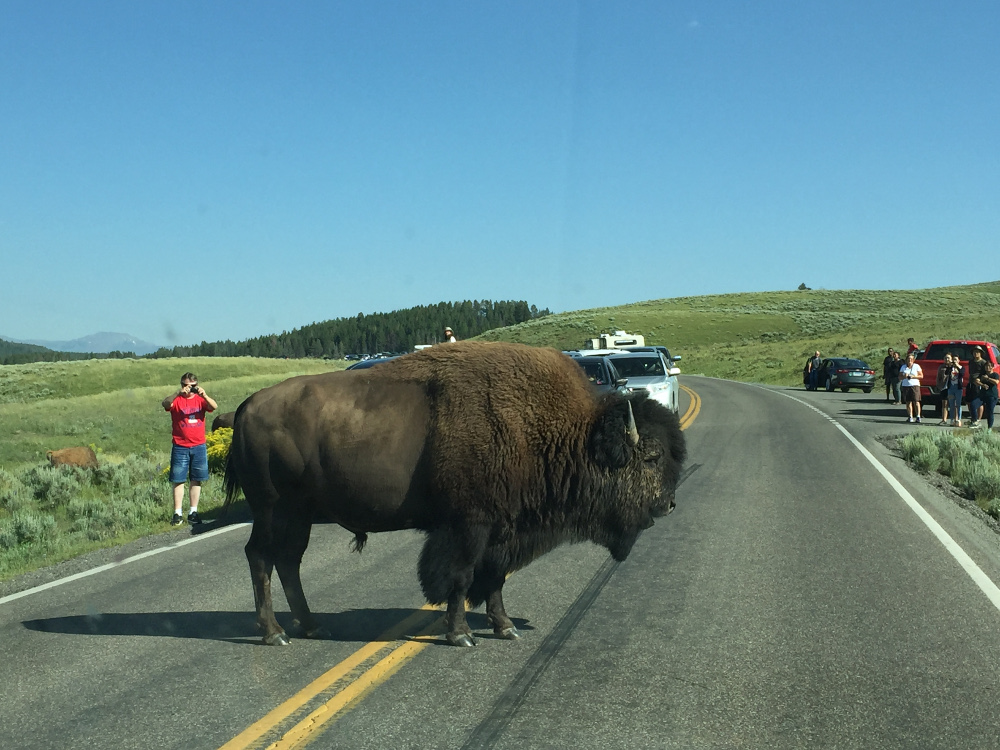 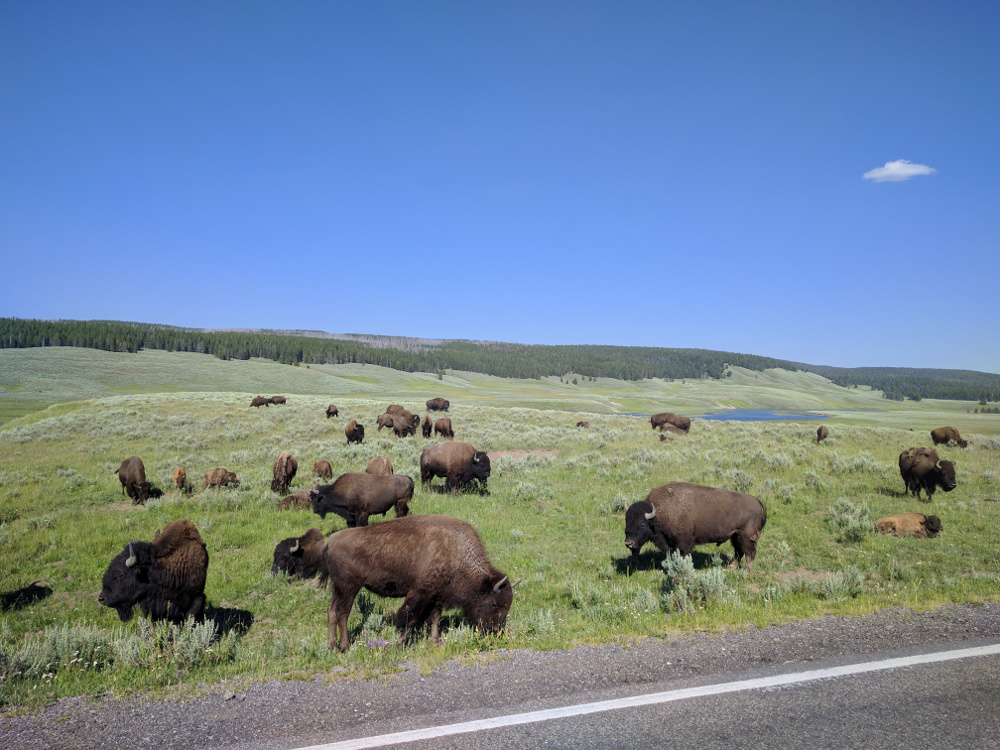 We also visited the Mud Volcano area, another boardwalk and collection of hot springs, geysers and bubbling pits. A bison was camped out near one pit, just sitting there minding his own business. It looked very prehistoric. 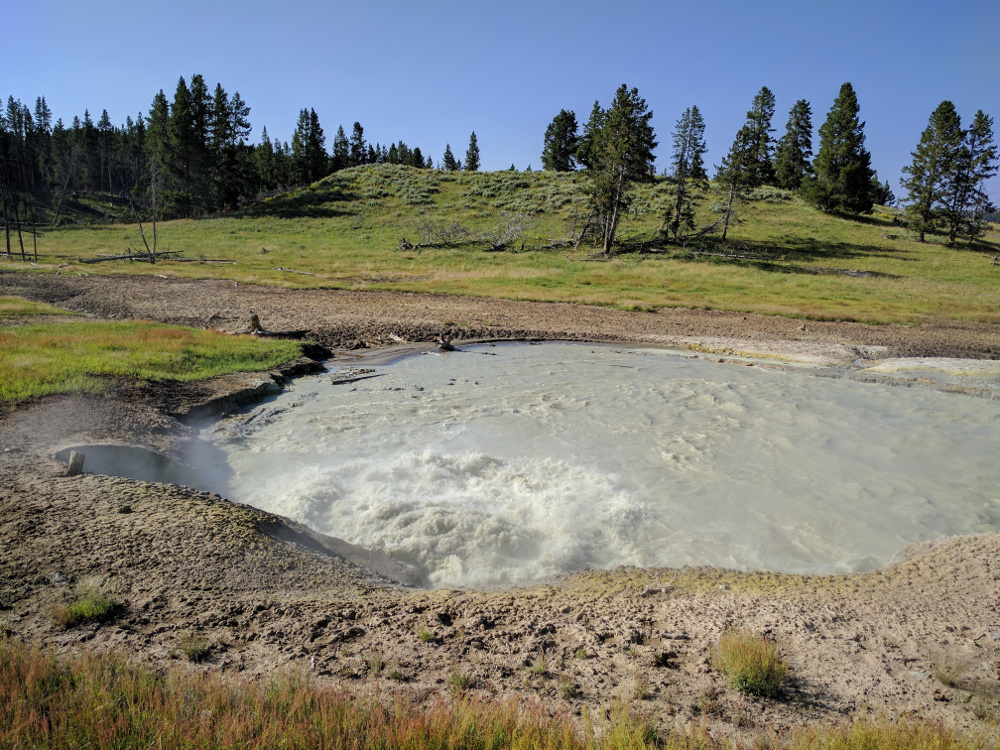 That night we lucked out in finding an open campsite that was a cancellation, so we got to stay another night in the park, enjoy water and electric hookups and showers.

In the morning we got back on the road, passing by Yellowstone Lake, charred forests and more views, on the way to South Dakota and Mount Rushmore. 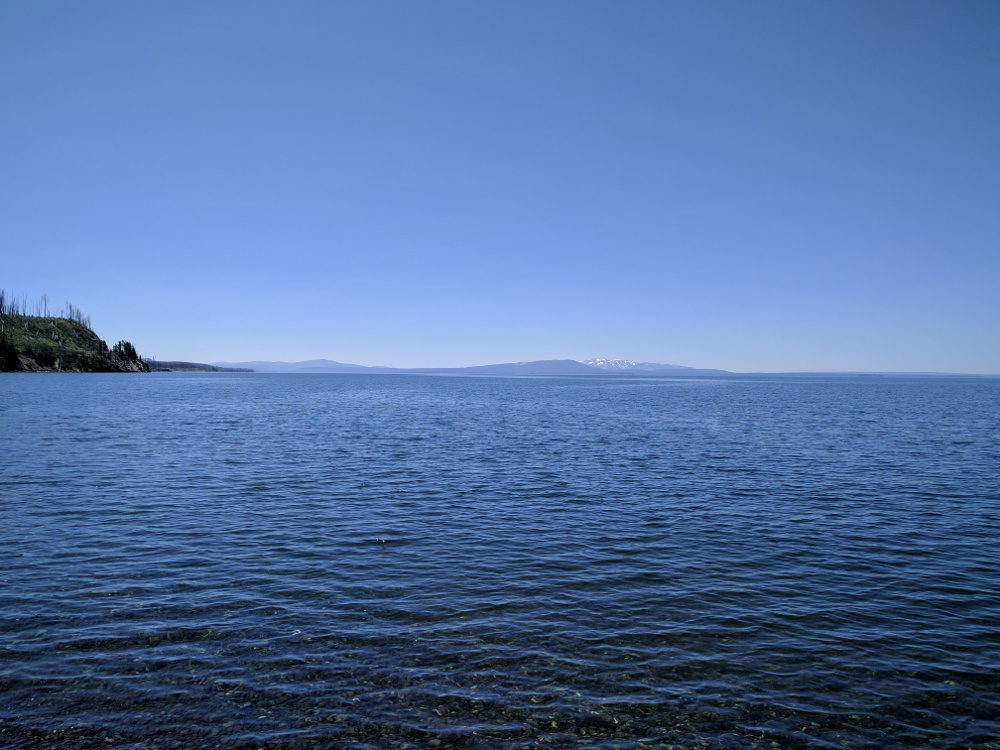 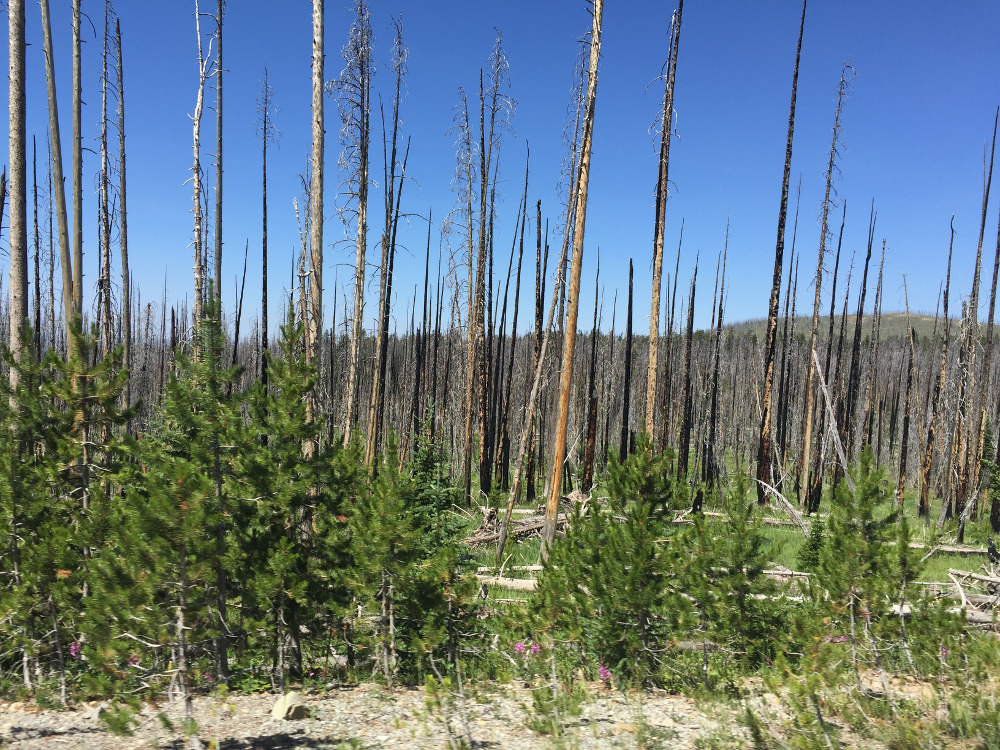 Helicopter dumping water on nearby wildfires: 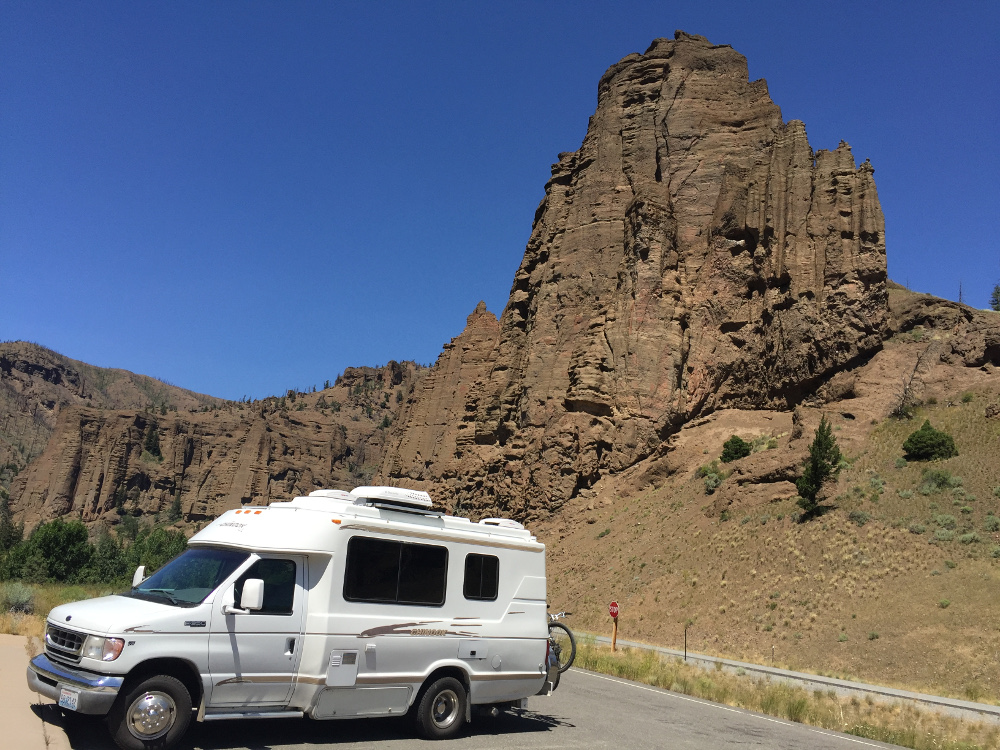 Next:  Ten Sleep and Black Hills