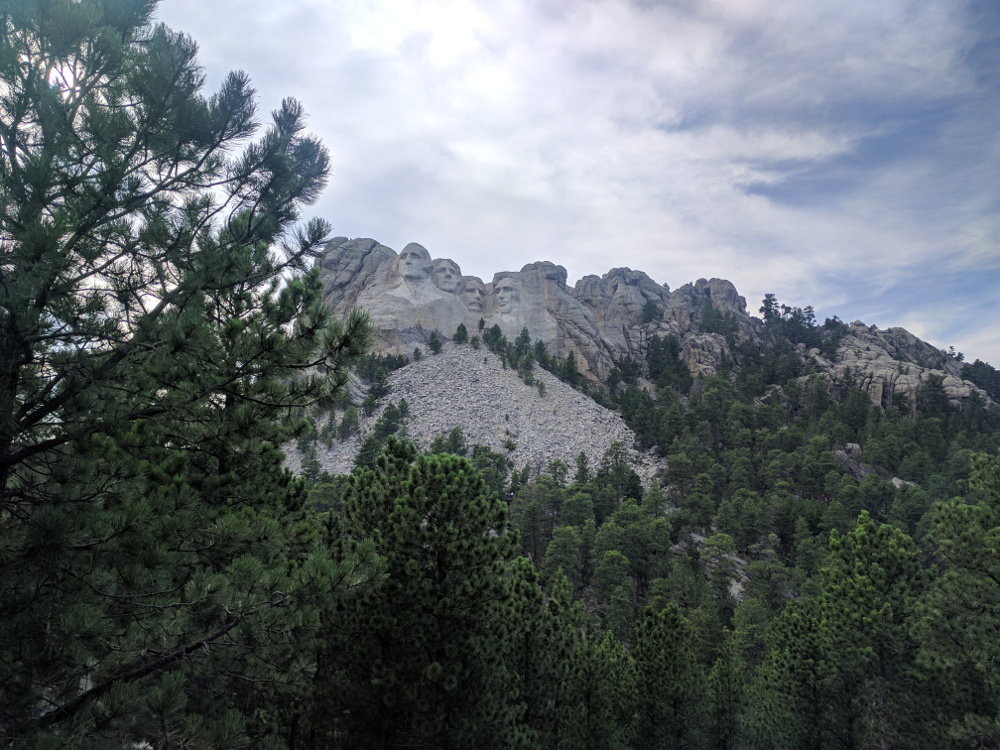 From Yellowstone we intended to drive to Gillette, WY, stay at Walmart, and head to Mount Rushmore the next day. However, about halfway between Yellowstone and Gillette on Highway 16 we passed a sign for Ten Sleep Brewery and decided to see what it was all about. 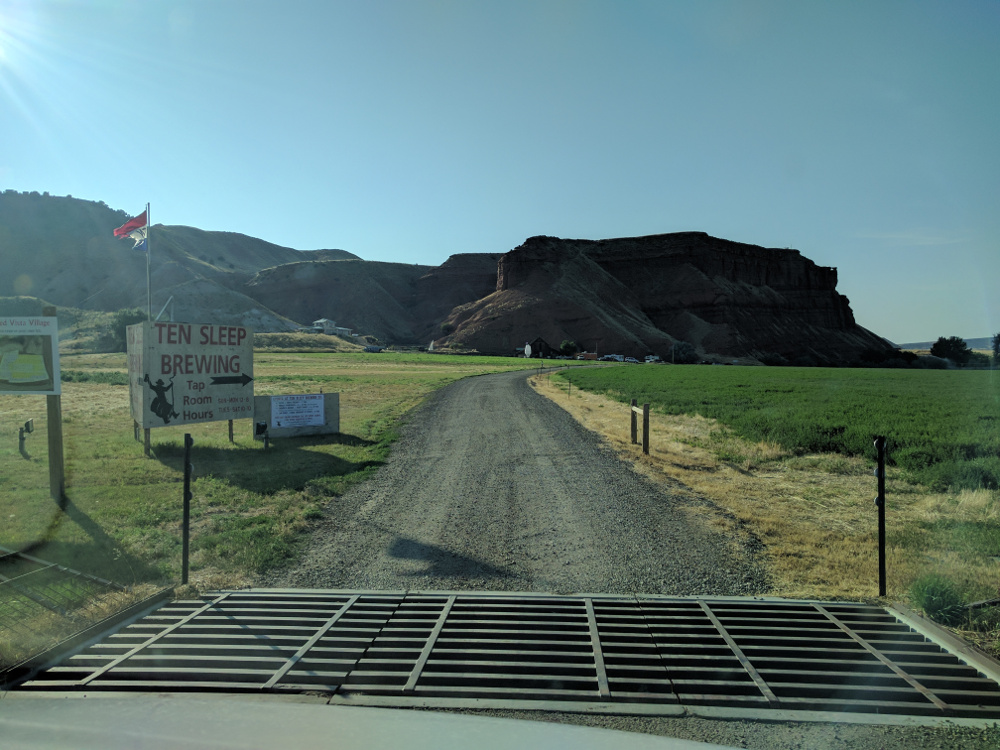 Ten Sleep is a very small town with a population of 250, and the brewery sits right outside it in a converted barn. The brewery caters to locals and a lot of people passing through, mostly rock climbers or tourists on their way to or from Yellowstone. 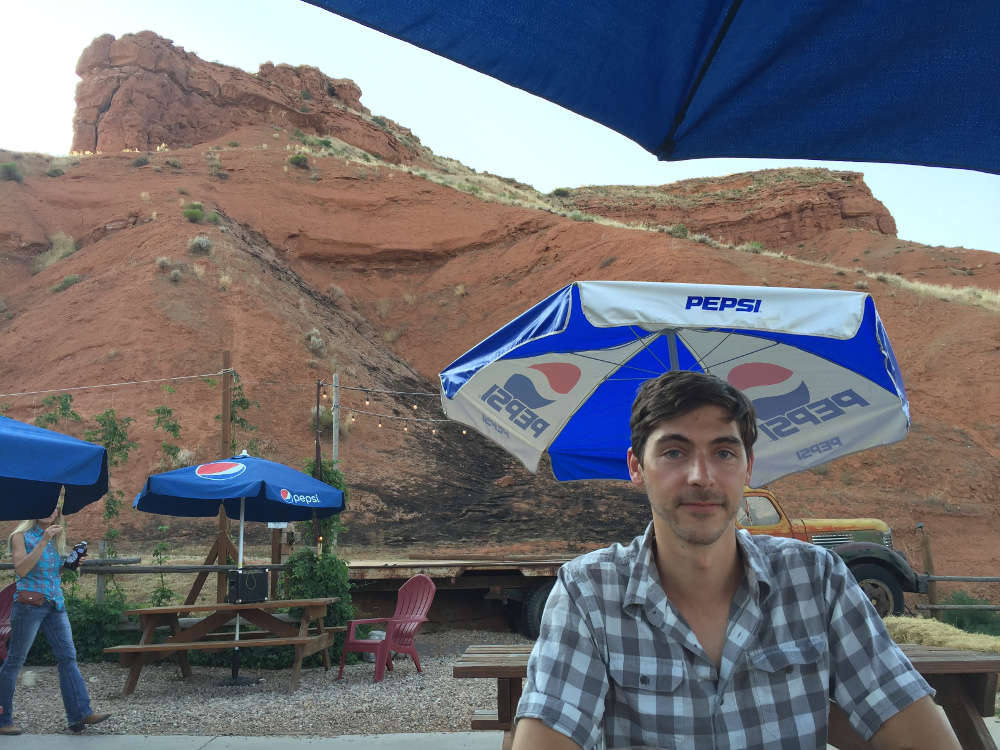 After having a couple of their beers, we were getting ready to leave and noticed a sign for “camping area” with a few tents and a couple standing nearby. They told us they weren't staying there, they live down the road, but it costs about $6 to stay. 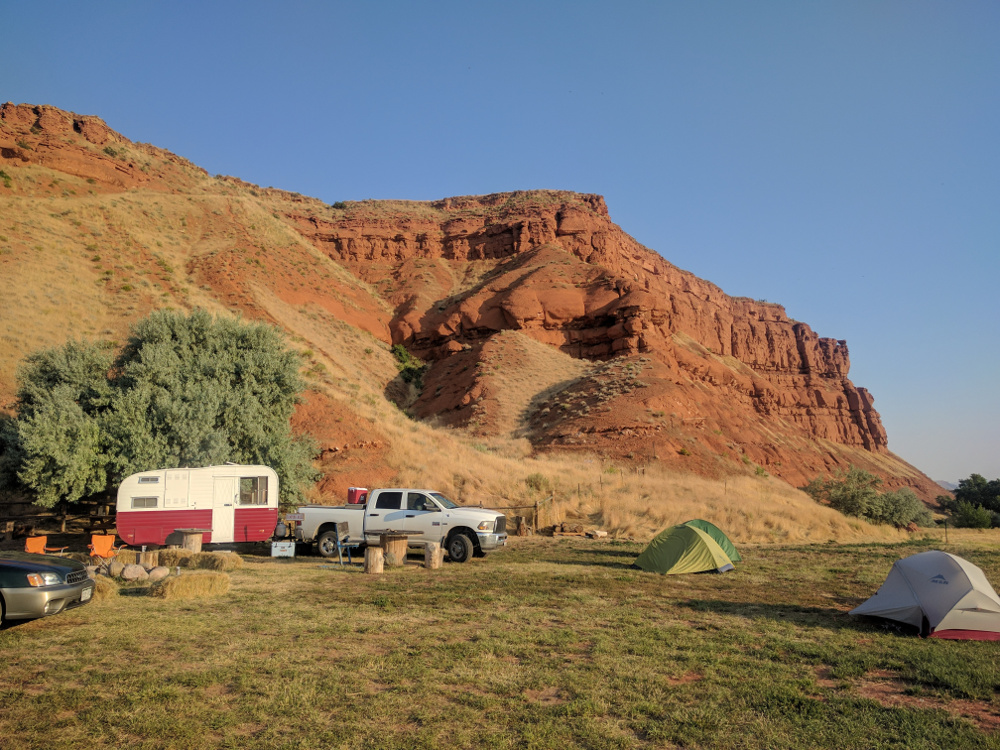 This was the start of what ended up being about a 6 hour conversation with the couple, Sean and Amber* (and their 2 kids and 2 dogs). Amber had grown up in the area, Sean in Texas, but both now lived and worked near Ten Sleep as cattle drivers. They were about our age and very interesting to talk and listen to, having a markedly different life compared to ours. Amber told me about hunting prairie goats and how to skin them, Sean talked a lot about cattle and had the best one liners in the history of one liners. The only one I can remember is “it was hotter'n two rats makin' whoopie in a wool sock.” Despite the difficulty, they both said doing their work was better than anything else they've tried. Also their info on the beef industry made me consider being a vegetarian (that didn't last long).

Two other guys also camping at the brewery made a fire and we sat around there talking and just generally enjoying the night, although I suffered many mosquito bites. Anyway, it was a good night and I felt grateful to have met them and to have my perspective shift a little bit. It's kind of weird when you meet people and they can change the way you think about your own life.

In the morning I was feeling the effects of too many Coors Lights and laid in the bed while Dan drove us over a mountain pass, stopping for breakfast at a lodge somewhere out there in the Bighorn National Forest.

After more driving, we arrived in the Black Hills of South Dakota, getting to Mount Rushmore in the early evening. 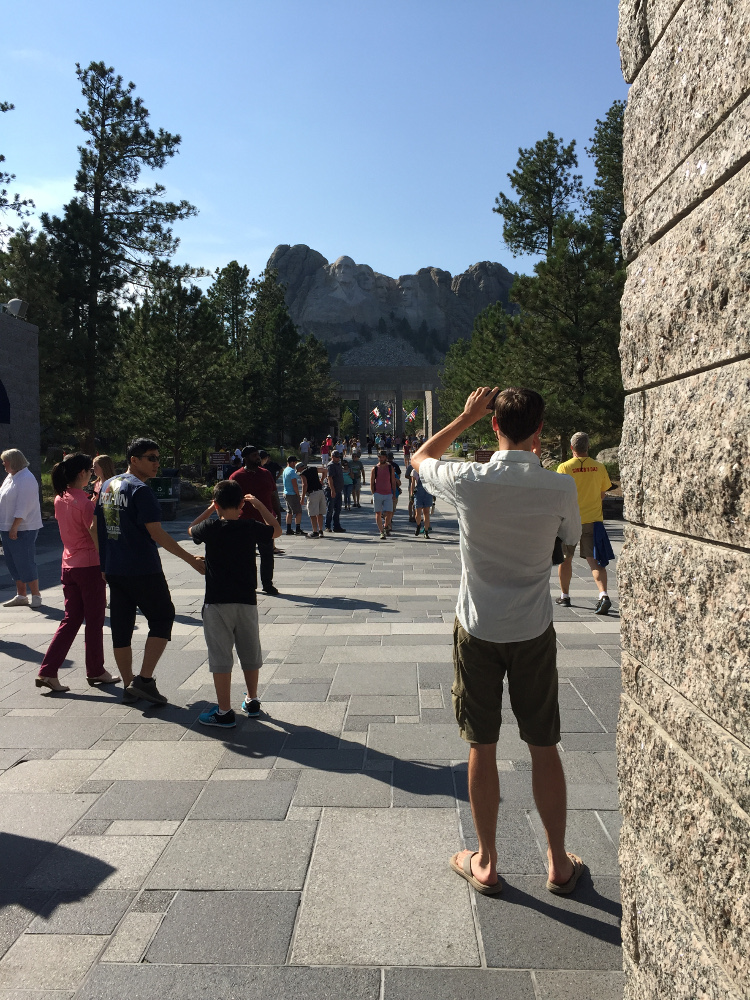 It was cool to see it appear out of the hills, first in profile then jutting out over the treetops. 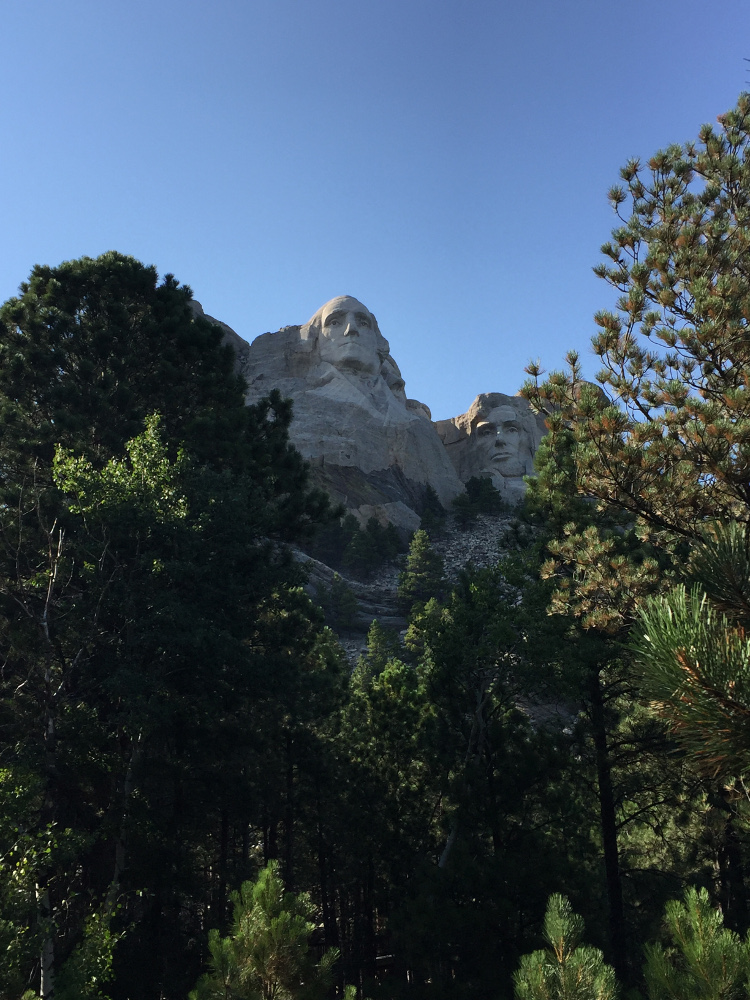 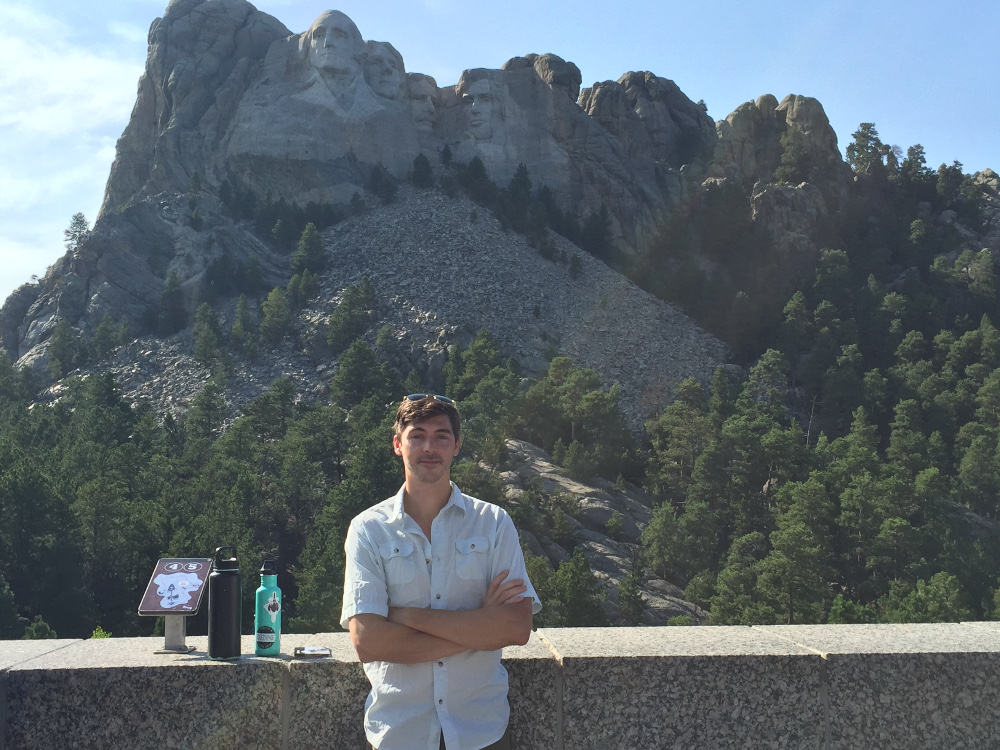 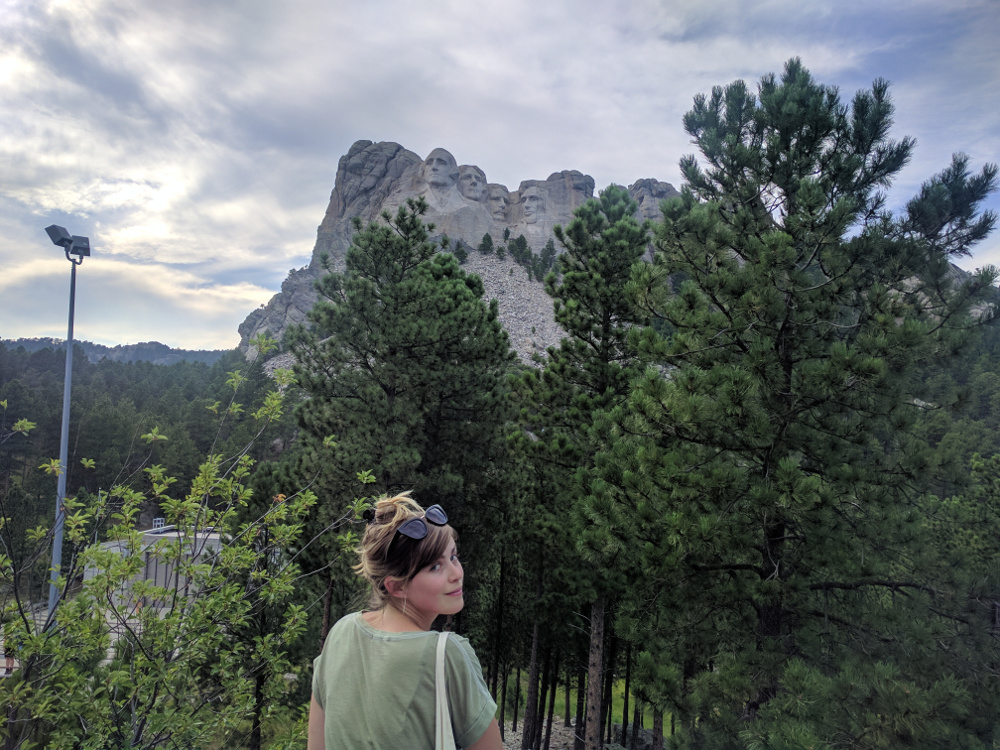 We walked the trail that takes you closer to the mountain and through the old sculpture studio.

That night we found a campground at Horsethief Lake, just a few miles away from Mount Rushmore. 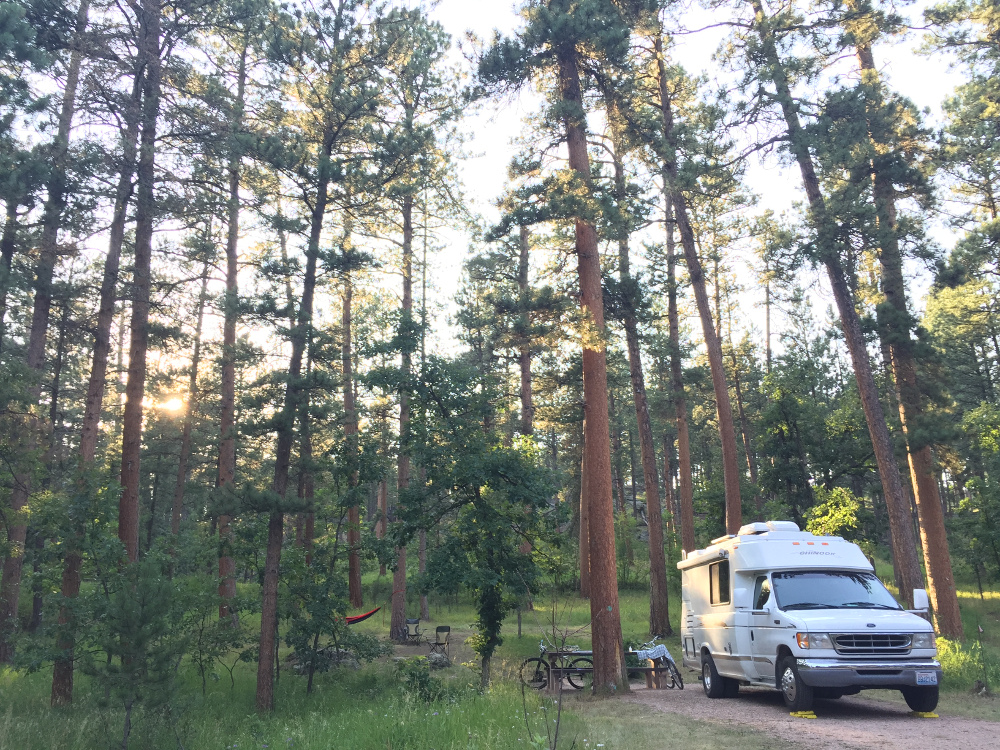 We spent all of the next day lounging around the campground and swimming in the lake. I think I spent most of the day in my hammock reading a book about grizzly bear attacks I bought in Yellowstone (Mark of the Grizzly by Scott McMillion). It was hot. 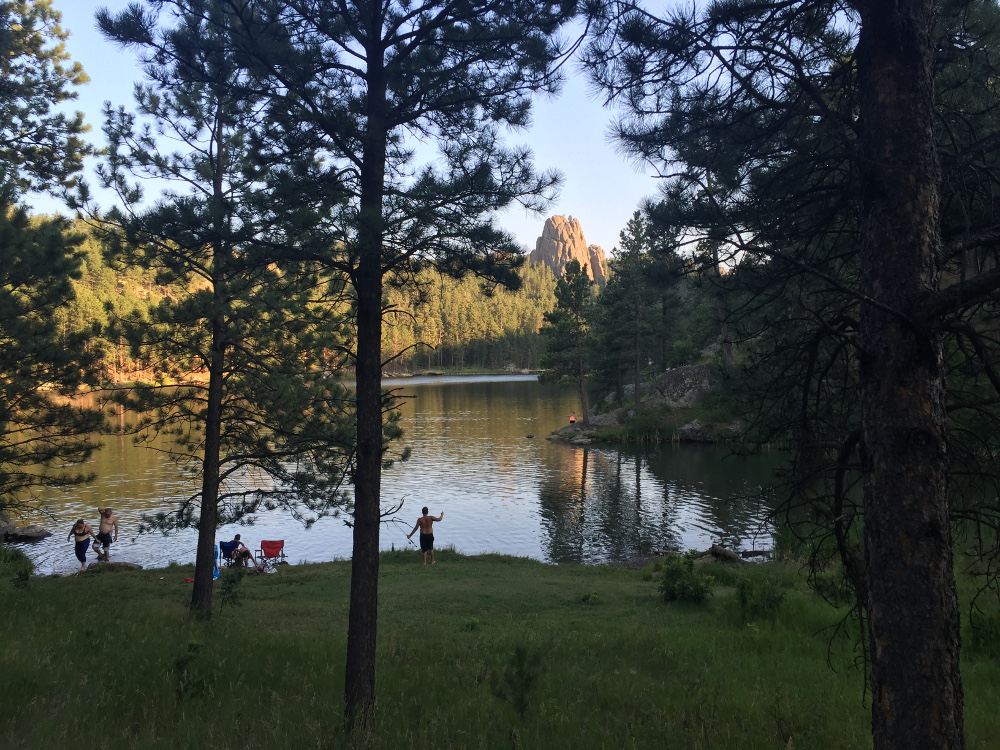 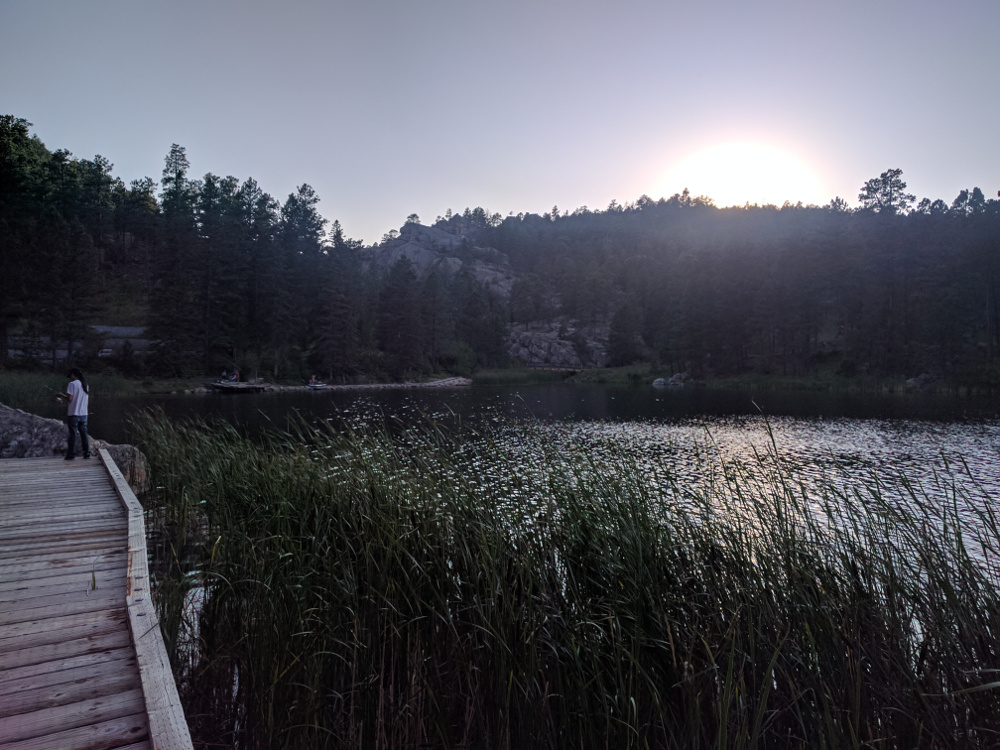 Drawing of Dan in hammock: 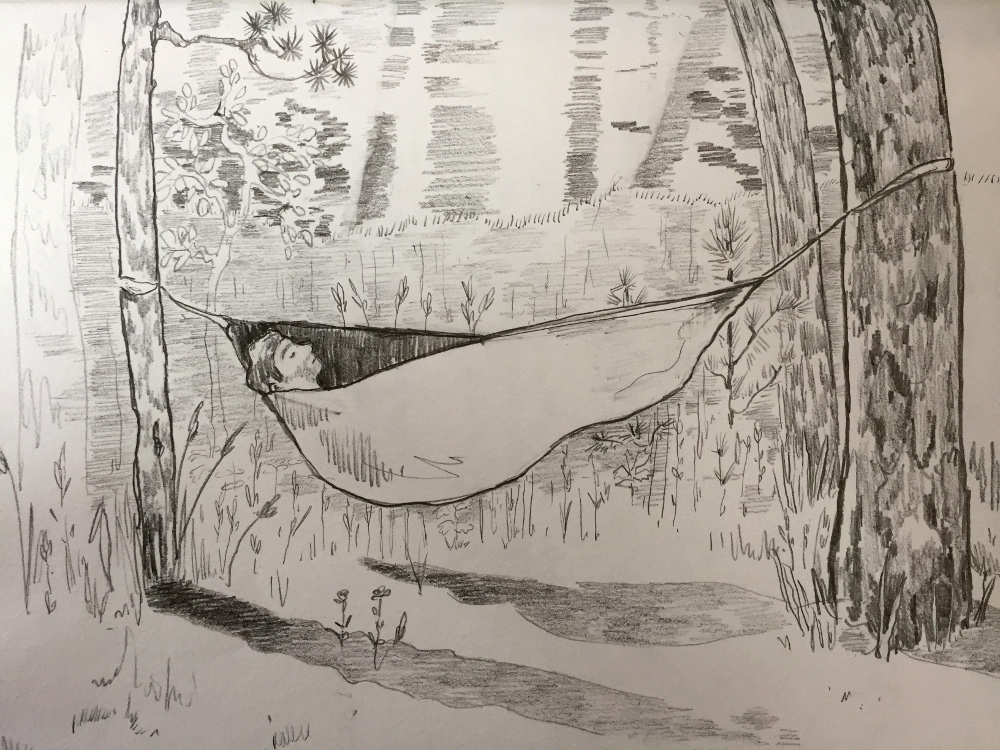 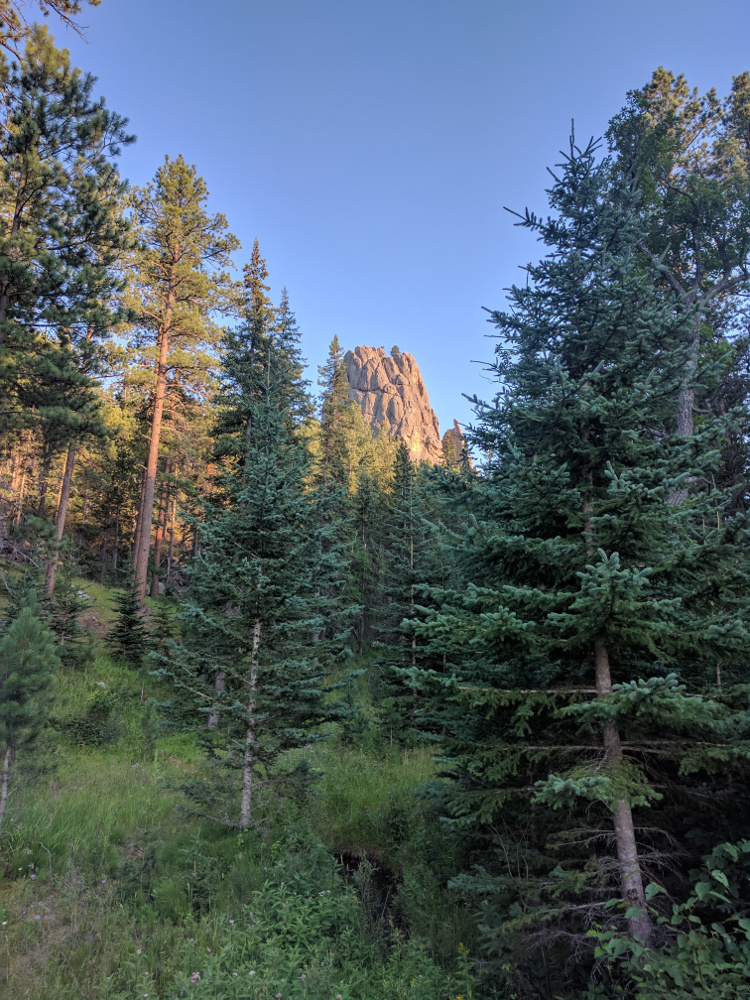 The next day we tried to find a hike to go on, but a lot of the good hikes (with cool rock formations, lakes etc.) were in Custer State Park, which charges a $20 entrance fee (!) just to get in. So we took a short but steep hike up the hillside outside of the State Park, which lent pretty amazing views of the valley and a lot of wild raspberries. 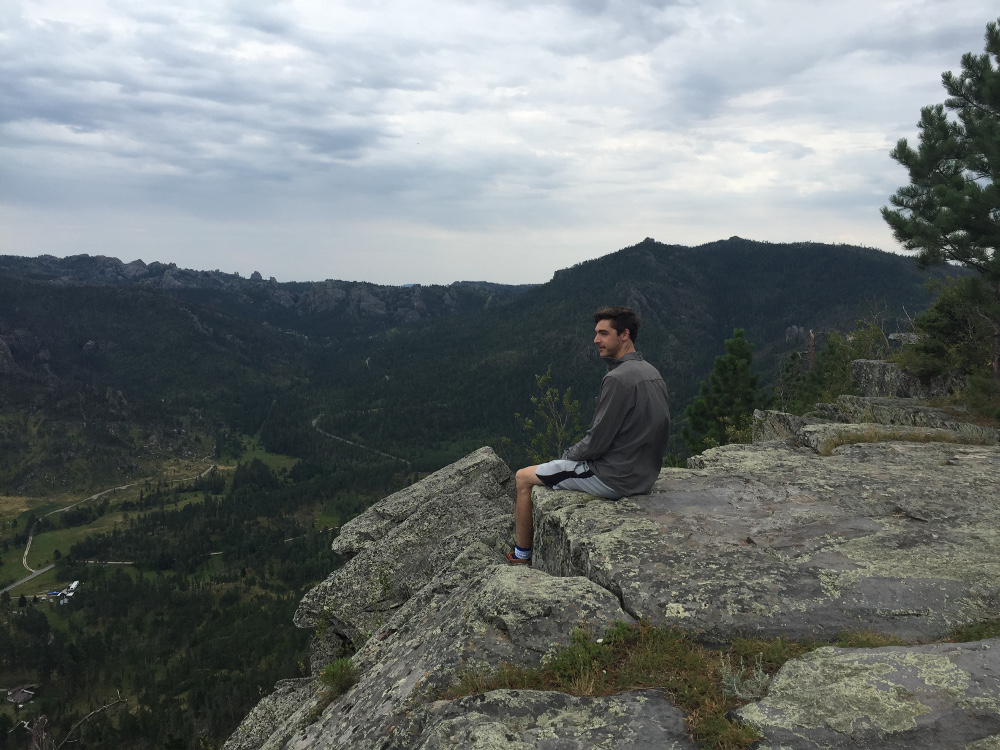 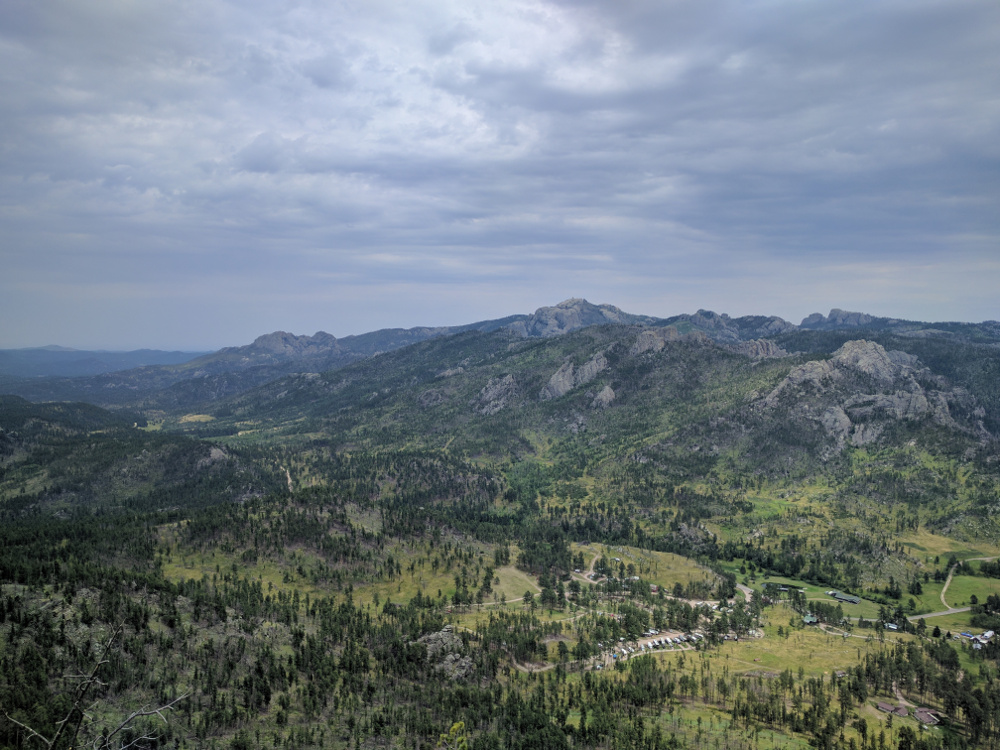 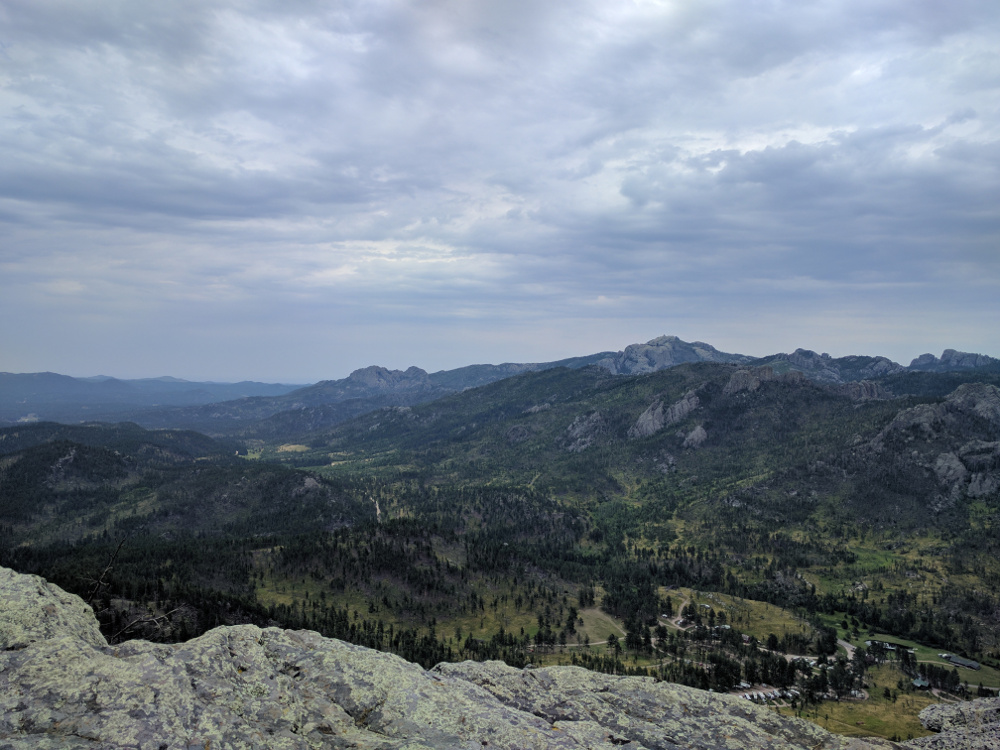 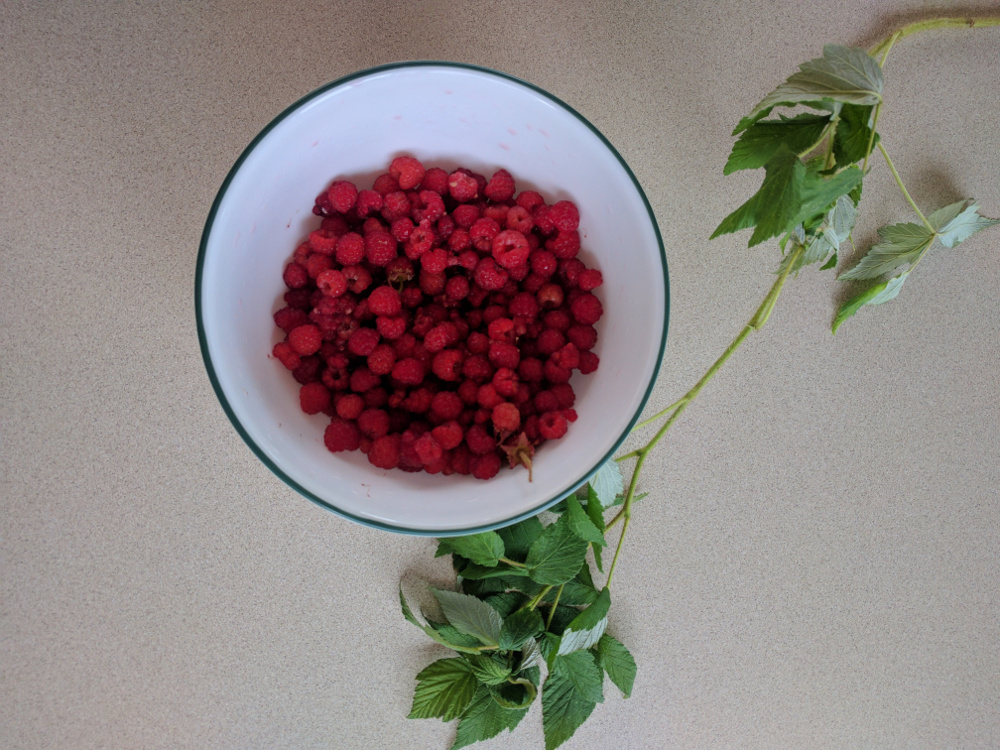 Afterwards, Dan took a bike ride on the Mickelson Trail (a long, dirt bike path winding through the Black Hills) and met me in Hill City, where we had bison burgers at Desperado, a restaurant whose original structure from the late 1800's is still intact. 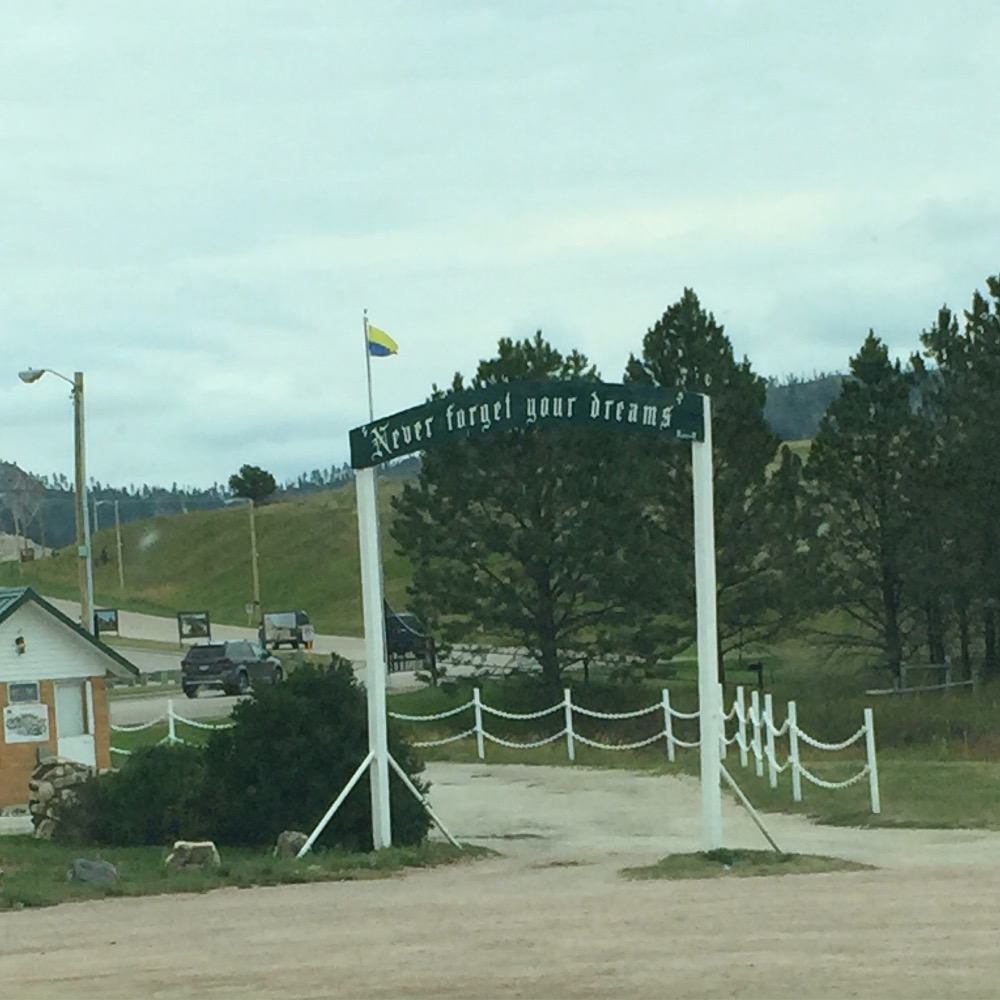 For lodging that night we stayed at a $5 campground behind a Mobil Station in Wasta, SD. It was actually pretty decent and a really good deal since it had hookups and a dump station.

*I changed the names of our friends from Ten Sleep.

Next:  Wall, SD and Badlands