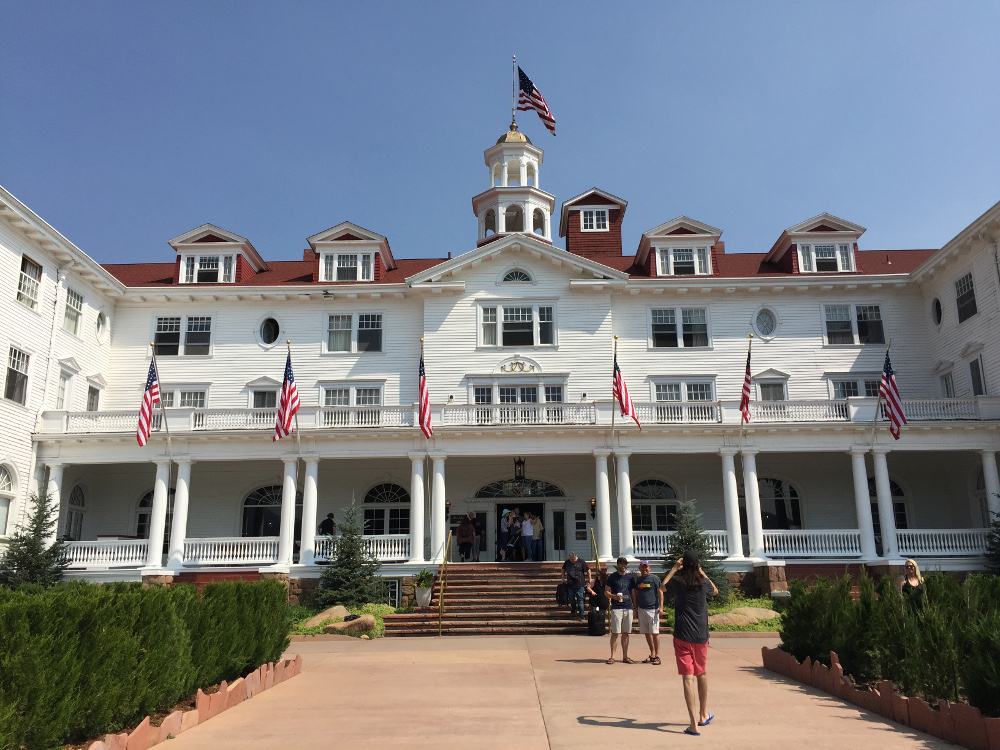 This day, in addition to being Thursday, also happened to be a very SPECIAL day - my 28th birthday. After leaving our Boondocker's spot, we drove and parked at Colorado State University and Dan made pancakes. He went to the CSU library to use the wifi for some time and I lazed around the van reading and drinking coffee (what I usually want to do at any given moment). Eventually I got up and rode my bike into the main drag in Fort Collins, spending a few hours by myself shopping and getting coffee/lunch.

Dan and I met back up around 2:00pm and started driving to Estes Park, right on the edge of Rocky Mountain National Park, where we had a stay at the Stanley Hotel booked.
Approaching the Stanley: 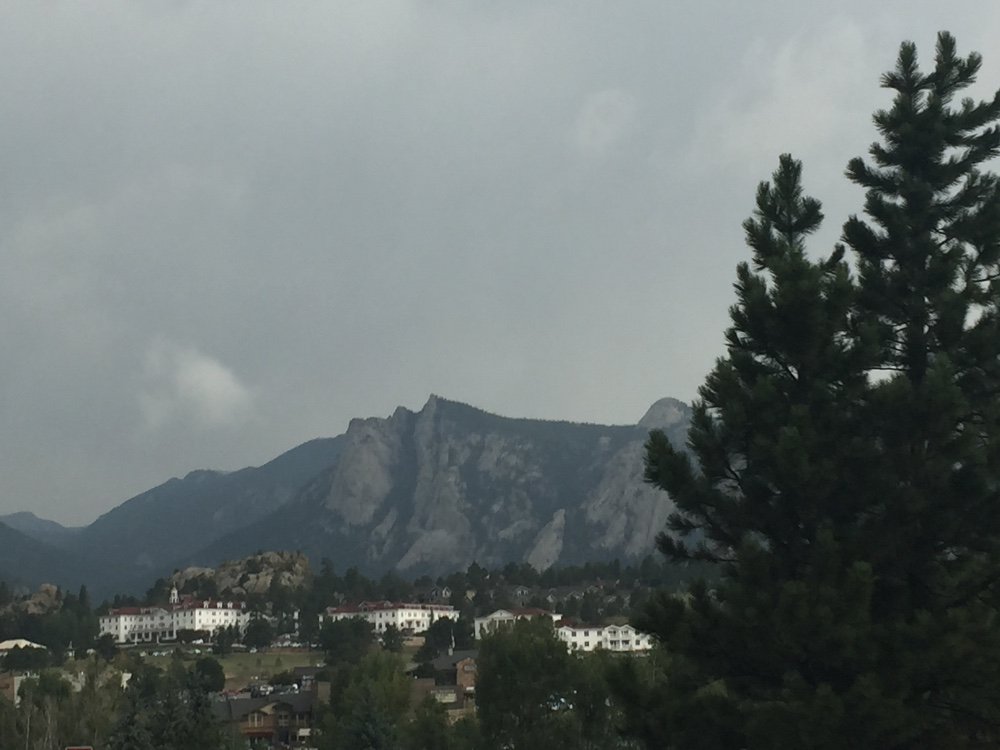 Russ and my mom had surprised me about a week earlier by buying us a night at the Stanley, a famous and historic hotel, supposedly haunted and where Stephen King was inspired to write The Shining after a fateful and frightening stay. 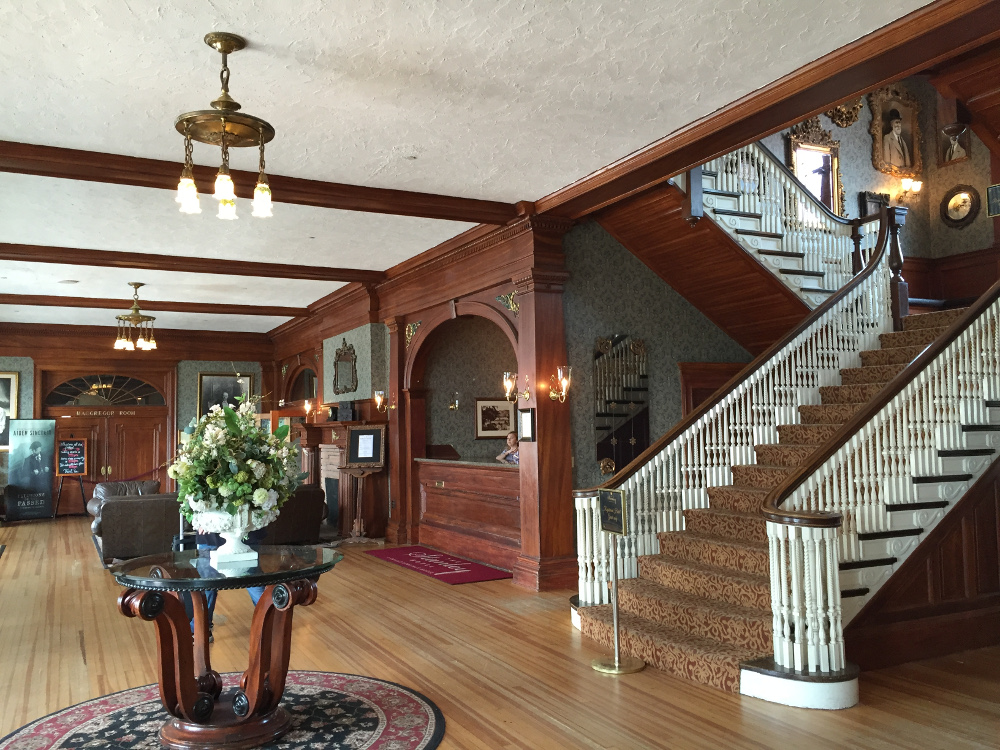 Not unlike Jack Torrance, he and his family stayed in the empty hotel on the last day of the tourist season, having to bribe the front desk to let them, dining alone in the dining hall with the chairs stacked on tables and having a solitary drink at the bar with the barkeep, O'Grady, in the middle of the night. Needless to say, I was excited to see it.

We arrived around 4:00 and tried to check in but were told there was a “problem with our room” (murder?) which was actually OK because we had a tour booked at 4:30. Our tour guide, “Scary Mary,” took us on the 90 minute tour through the hotel, describing legends and ghost stories in addition to the general history of the hotel. Most notably, the story of Elizabeth Wilson, a chambermaid who in 1911 went to relight a gas lamp following a storm, causing an explosion from an undetected gas leak. The explosion caused her to plummet down a floor, breaking both ankles. She survived the ordeal and went on to work in the hotel, well into her 90's. Some say her spirit haunts the room where the explosion originated, the same room Stephen King used when staying at the Stanley. 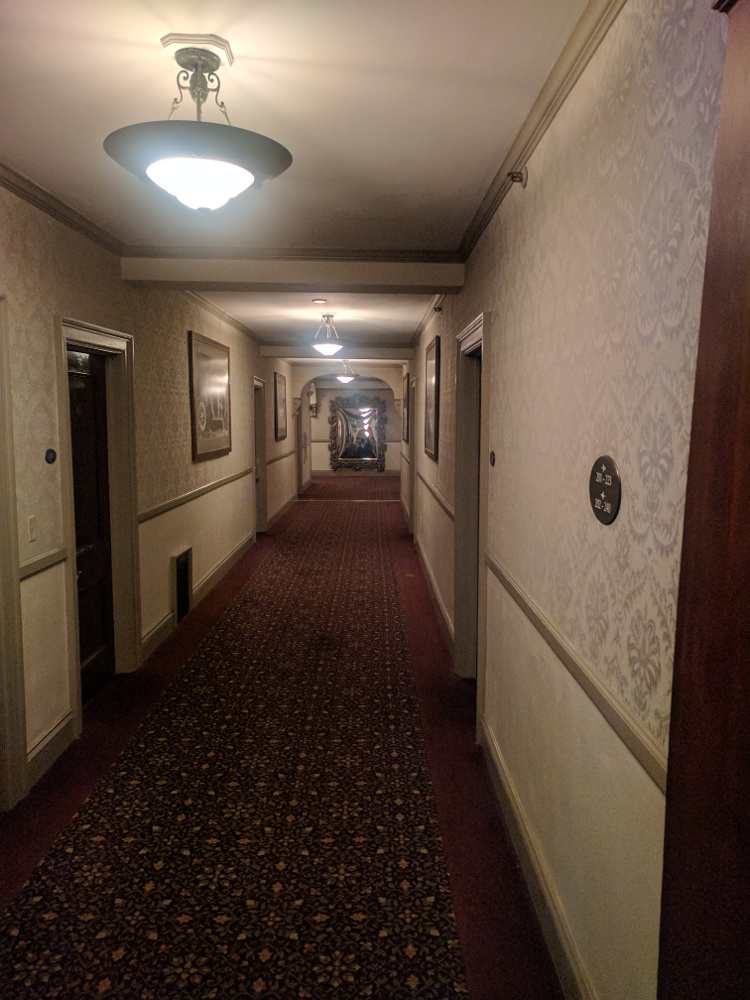 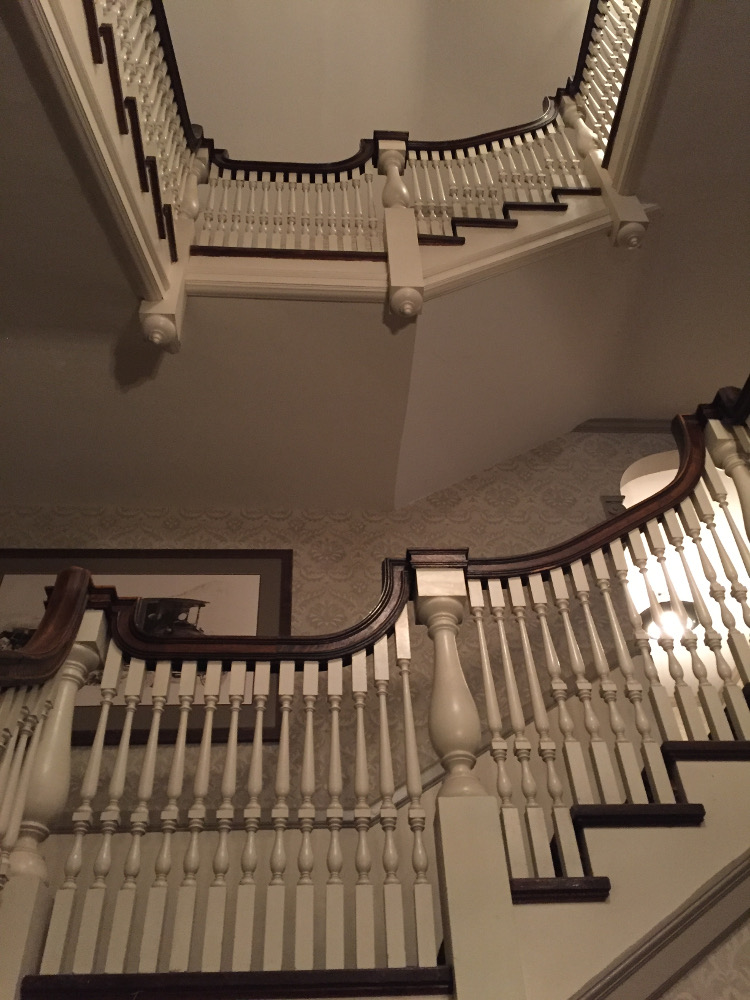 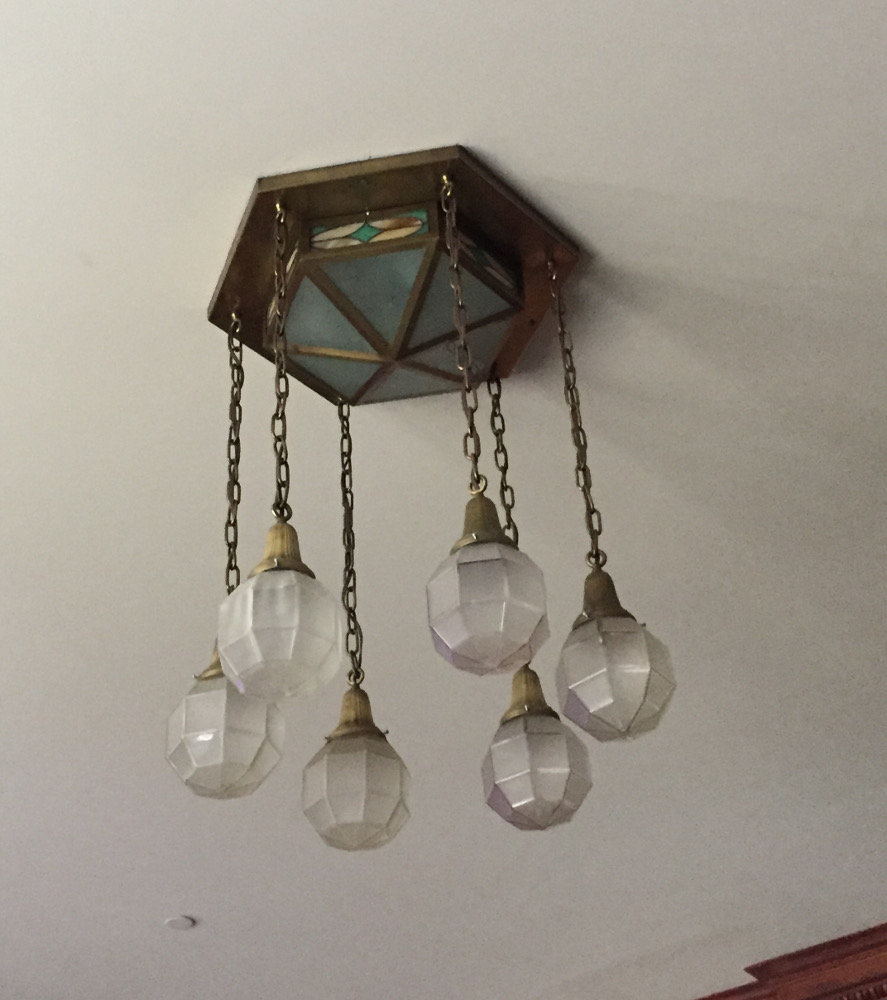 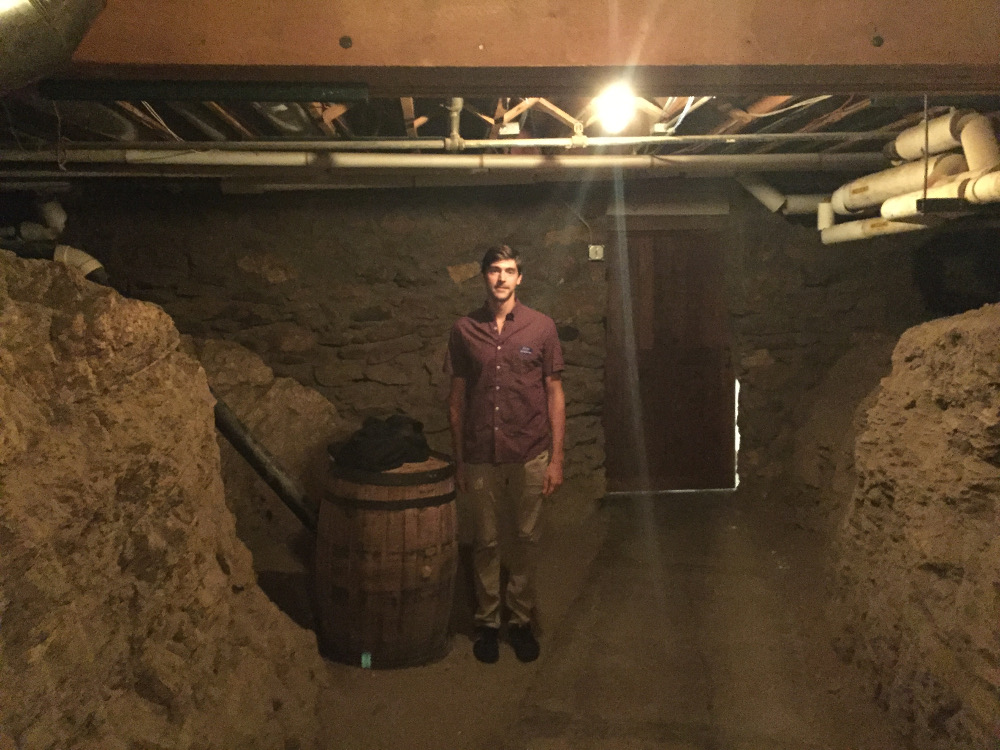 We didn't have any ghostly experiences or sightings, however later that night going up to our room alone felt a little creepy but all old houses and hotels feel creepy to me. After the tour we went back to the room and relaxed for a while, then went down to the bar (where King retreated following a nightmare) for cocktails and food. We were starving and the food was so good – Dan had elk/bison/bacon meatloaf and I had a delicious steak with beet salad and goat cheese. We sat there for a while and talked to a woman in town for work (she worked for the show Fixer Upper), gifting us with, upon her departure, a light up pen she seemed really excited about.

Really though, it is a beautiful hotel and (outside of all the ghost stories) has a pretty interesting history that I suggest you google. 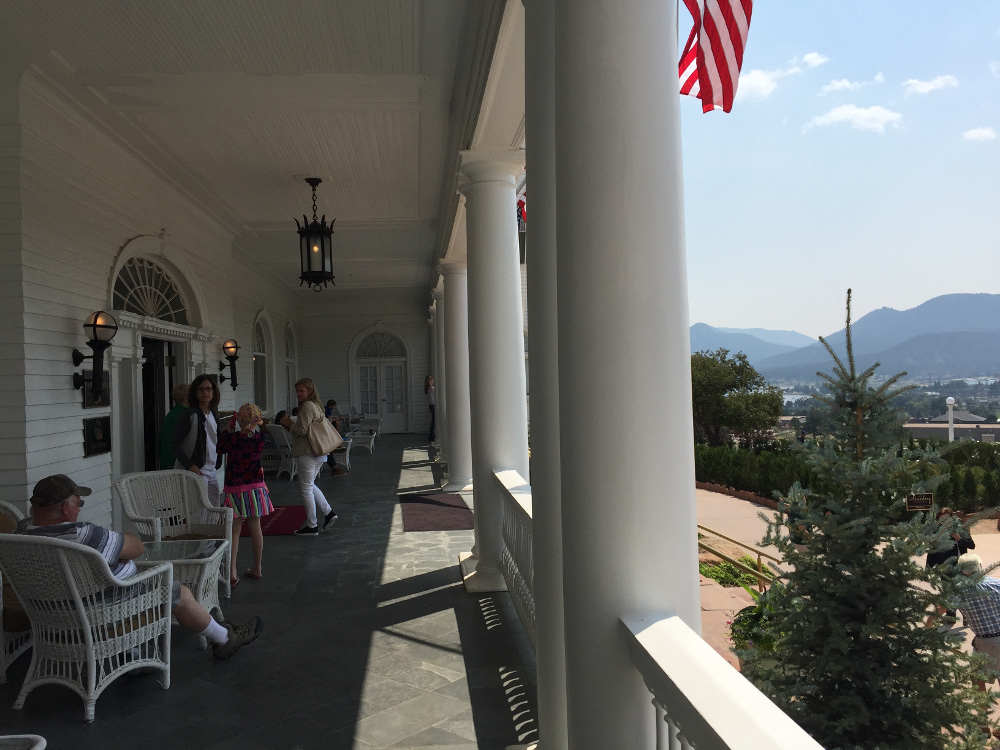 In the morning we wandered around the hotel grounds and took some pictures, walking through the in-progress hedge maze, leaving around 1pm or so to head into the Rocky Mountain National Park. We drove through most of the park, stopping at one of the only first come first served campgrounds, Timber Creek. We lucked out and got the last spot. We set up camp, had dinner and that was that.

Driving through the East side of the park, over the highest paved road in the US (12,000+ ft), well above the treeline: 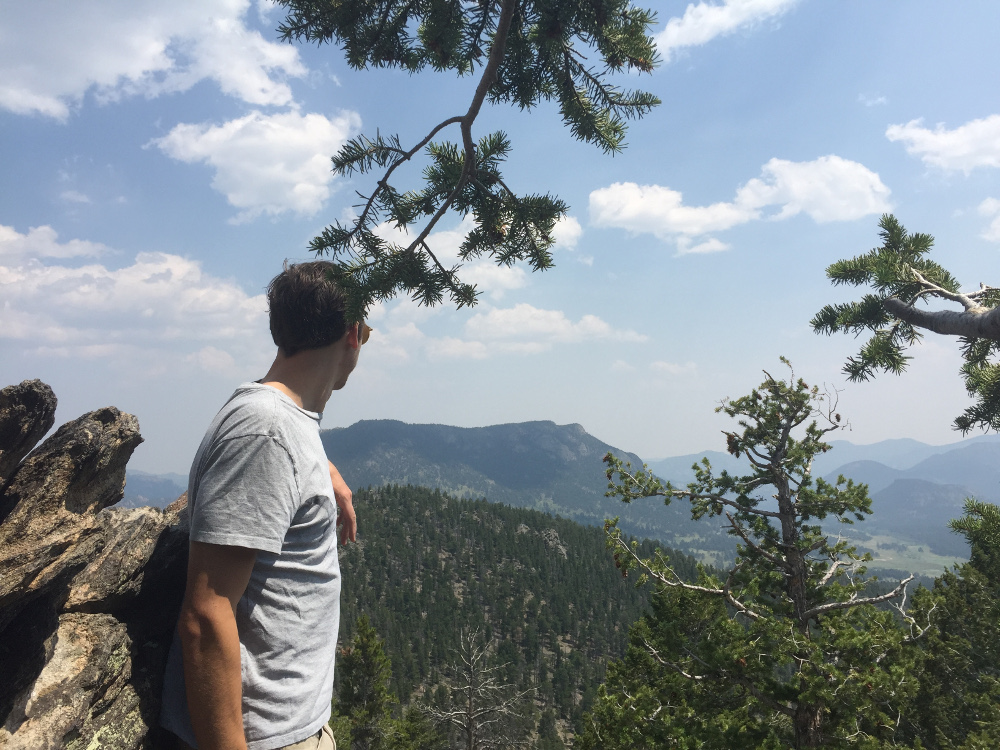 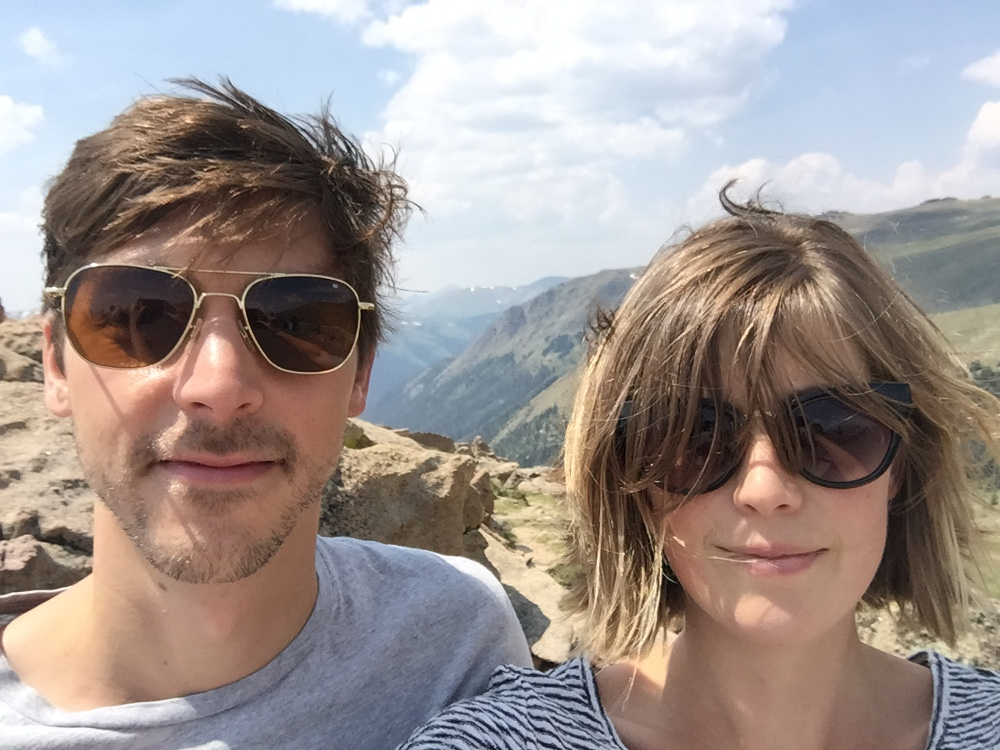 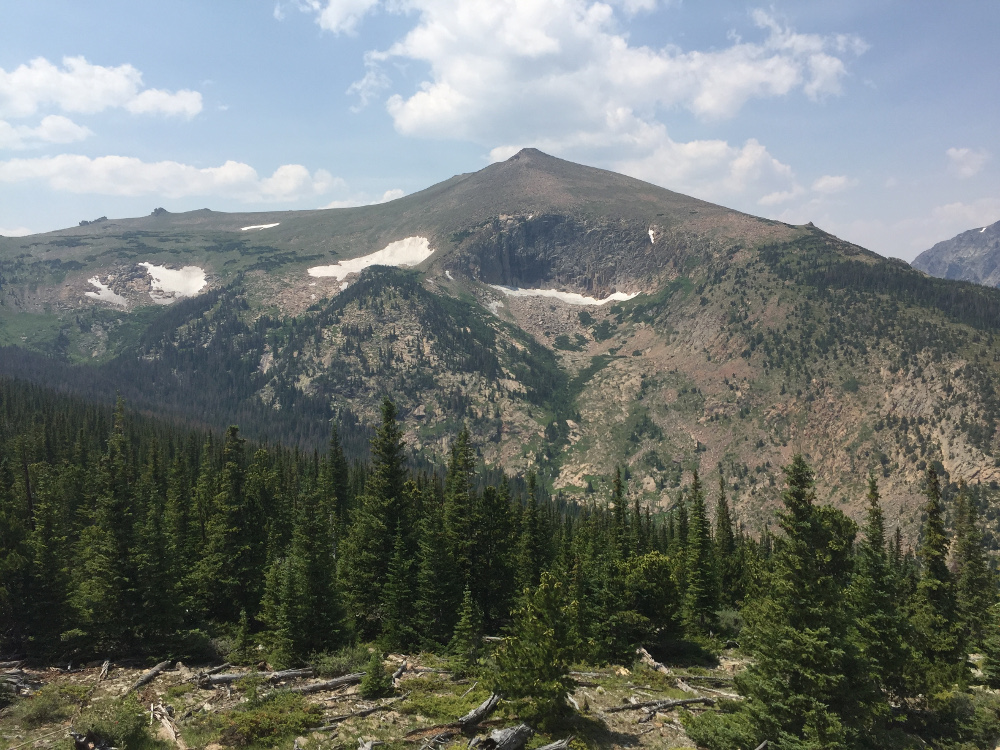 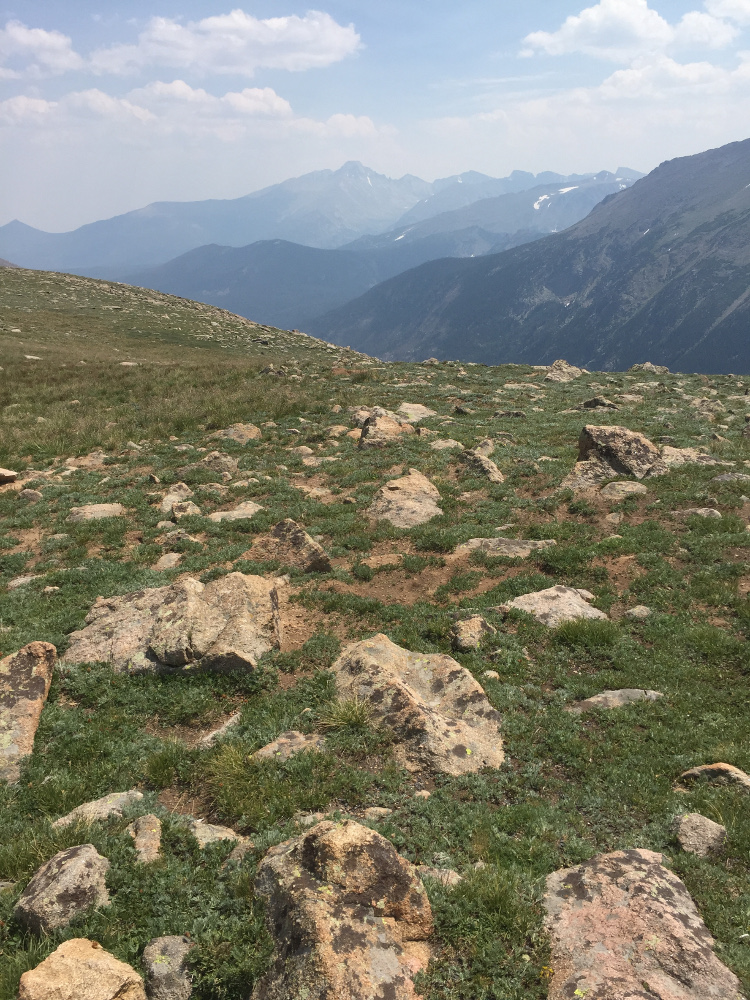 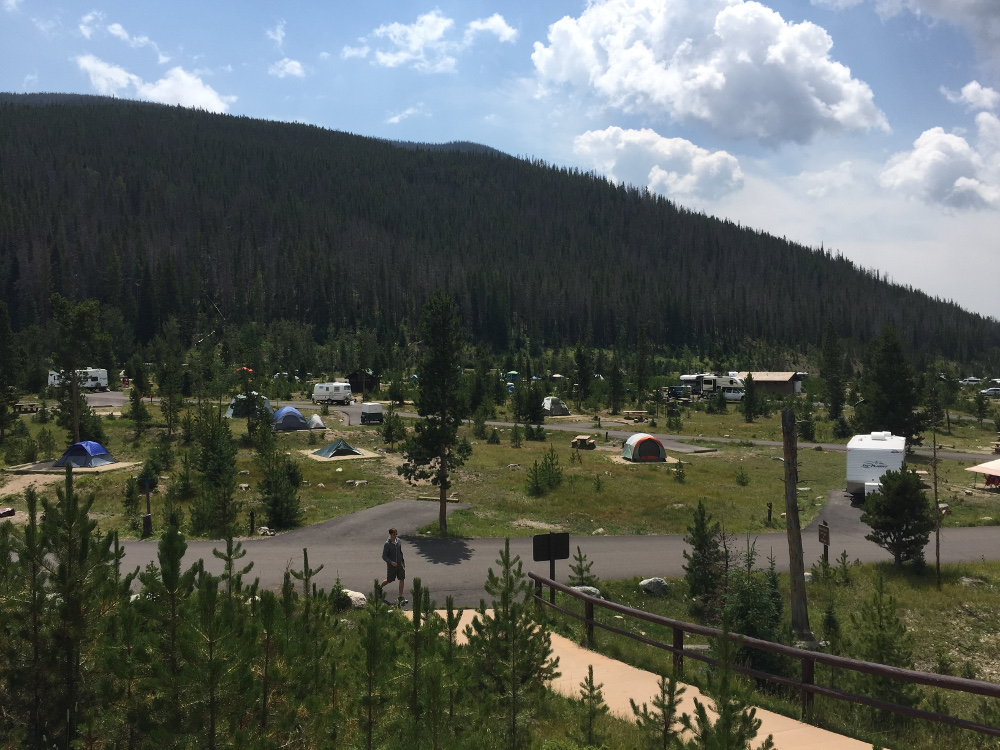 The next day we walked over to nearby Holzwarth Historic Site, a group of old cabins used as a guest ranch from 1919 well into the 1960's. You can tell people back in the day used to be smaller because the door frames are tiny and everything is very low to the ground. 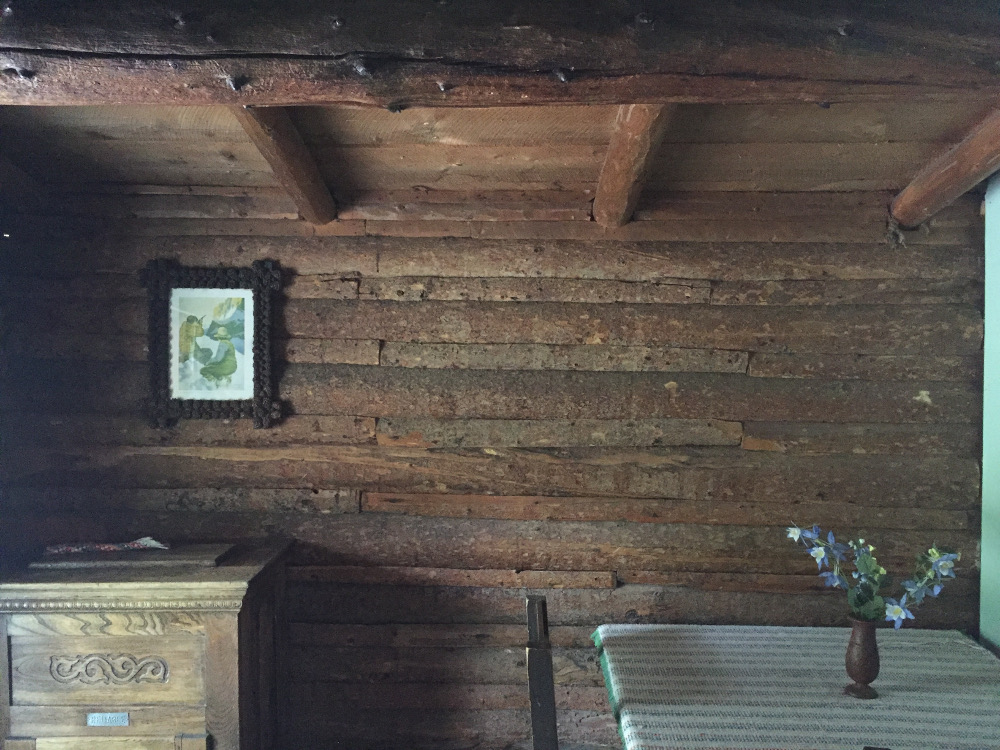 Dan tried on a bison coat (it was heavy). 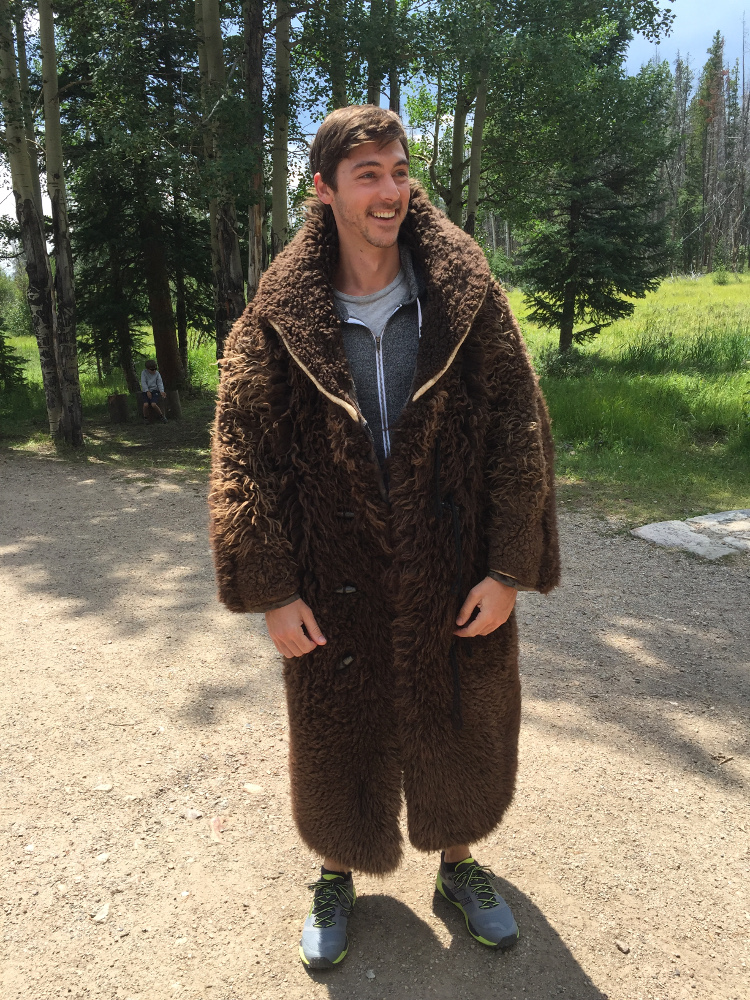 The site also has an old taxidermy shop, rusting farm equipment and various tents and outbuildings preserved from the ranch's glory days as a fishing and horseback riding destination. 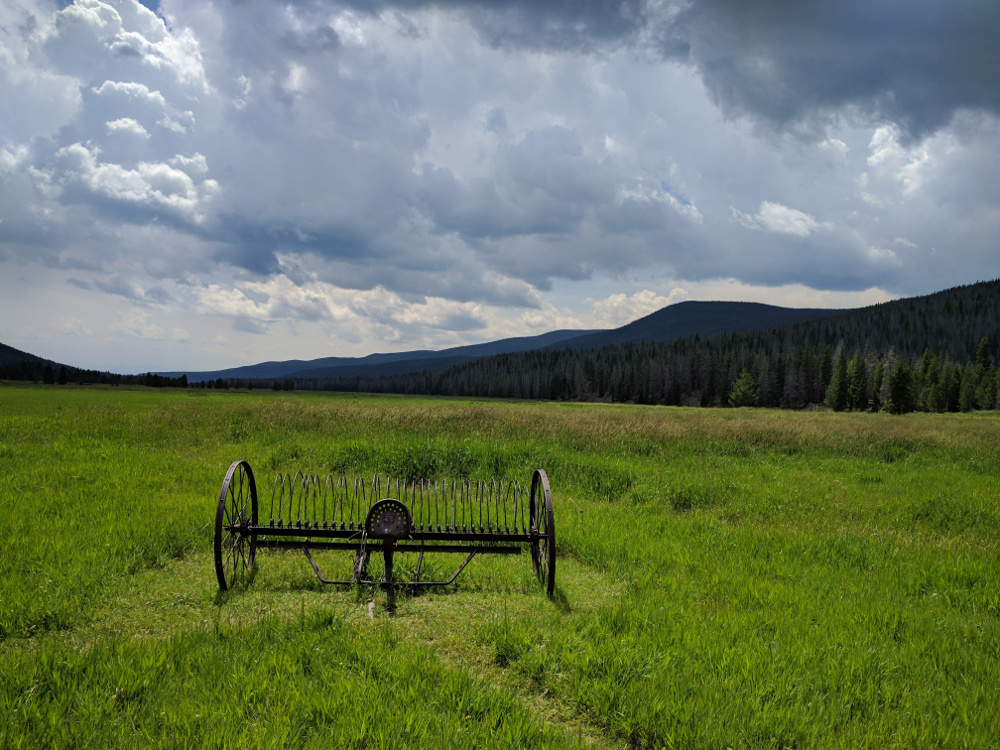 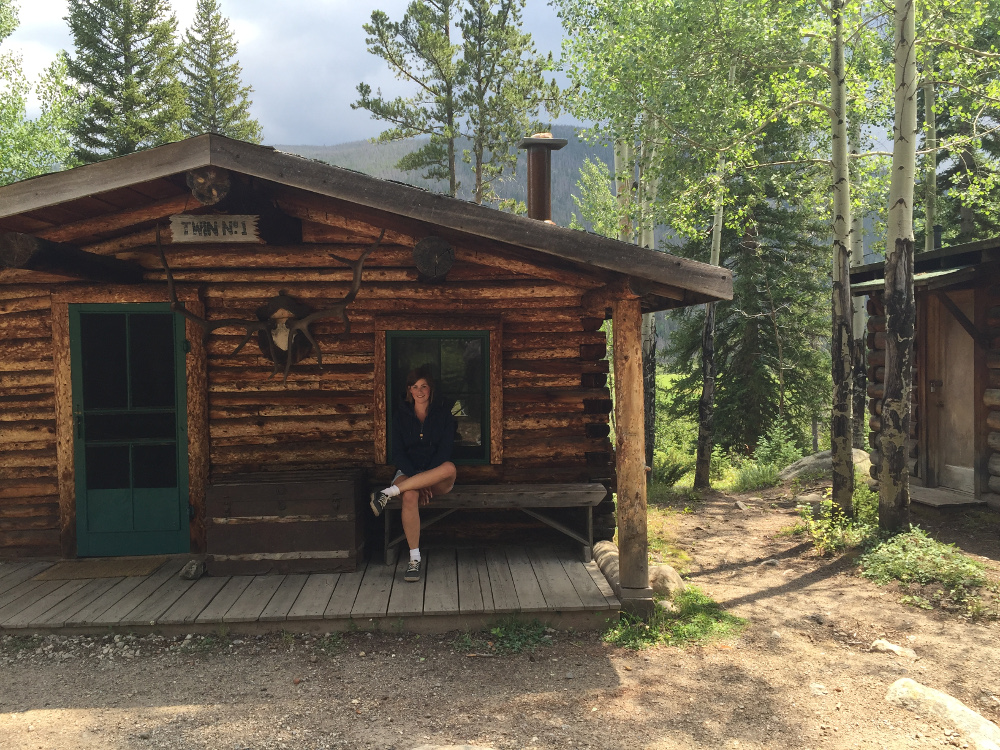 The rest of the day I worked on some drawing and Dan computed while a thunderstorm pummeled the van with rain, we made dinner and went to bed.

The following day we got out of camp around 10am and drove south, stopping to hike Cascade Falls in the west end of the park, just outside the town of Grand Lake. 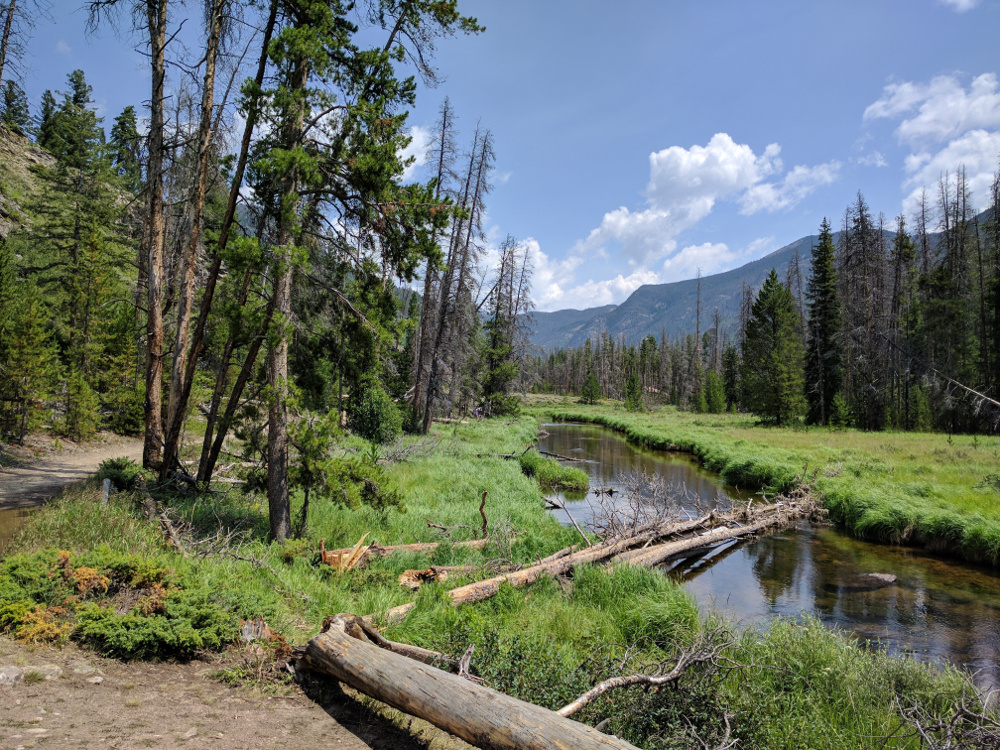 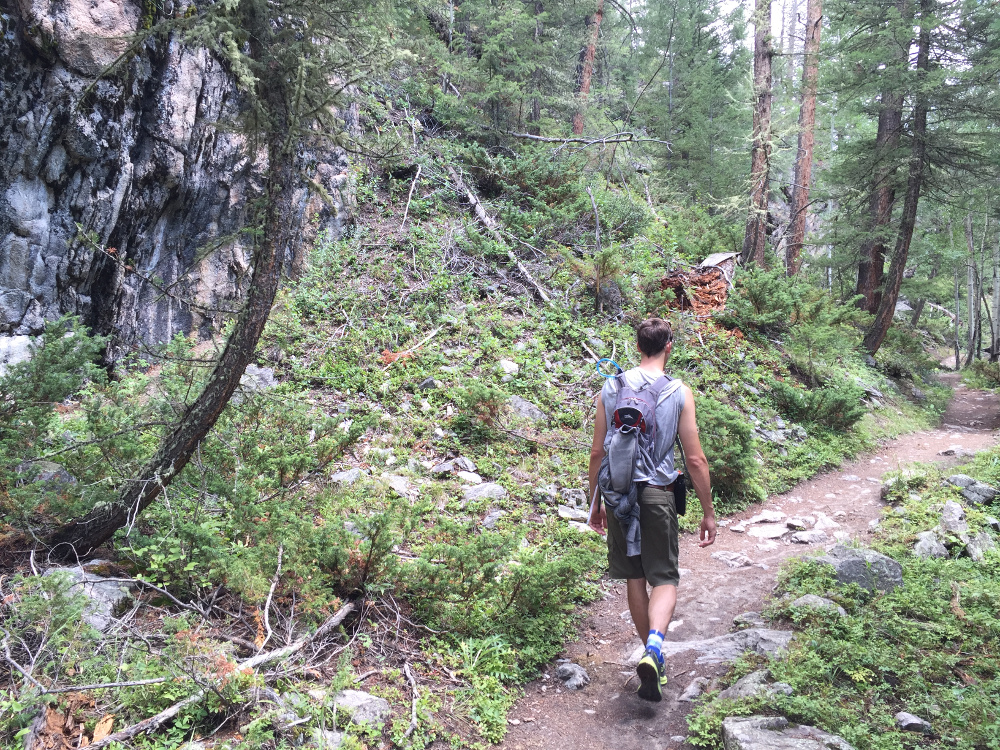 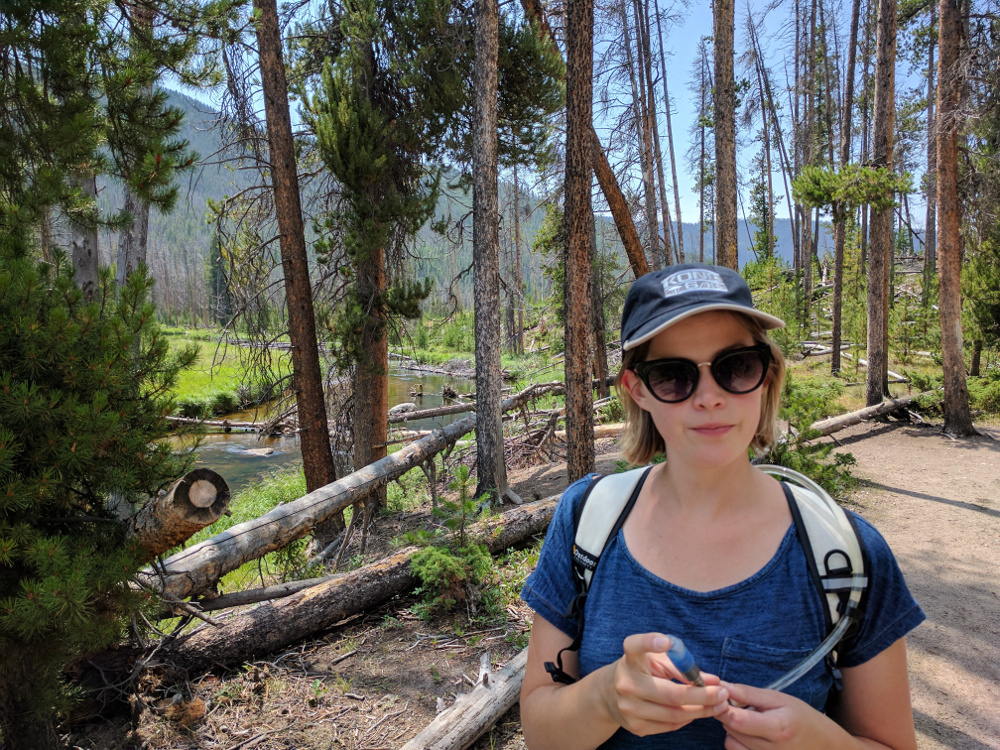 A fairly flat 7 mile hike roundtrip, it took us out on a dirt road (past a moose), along a creek (past the remains of a dead moose or elk), through rocky outcroppings and forest. We saw a few deer along the way, one little one who didn't seem afraid of us at all, and the same moose on the way back resting quietly and covertly in some bushes. 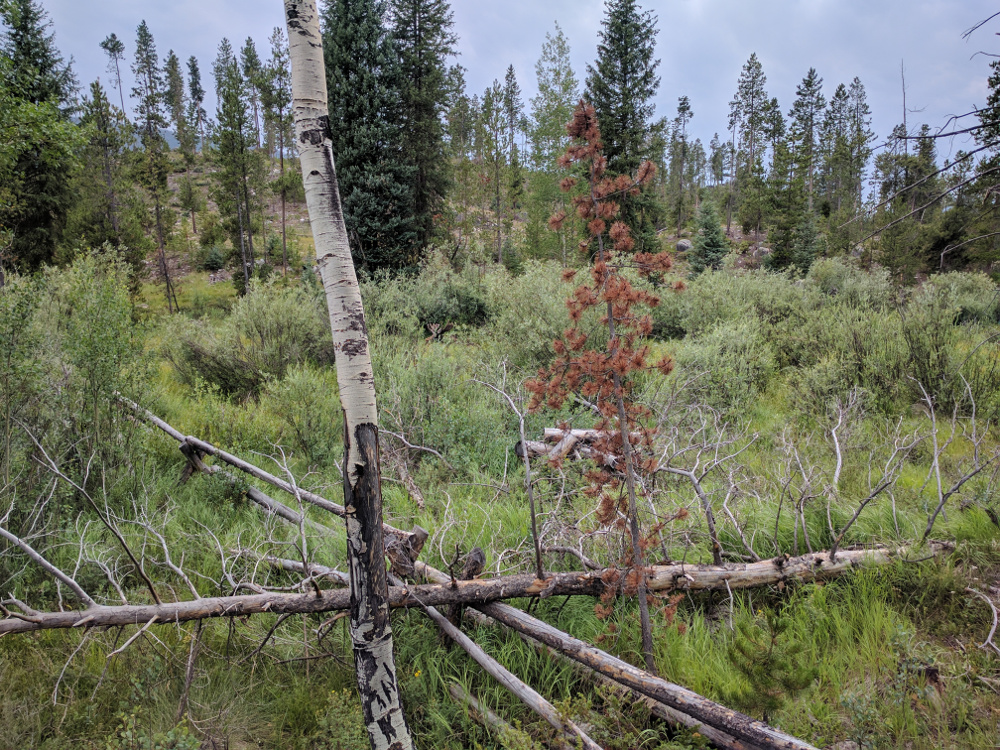 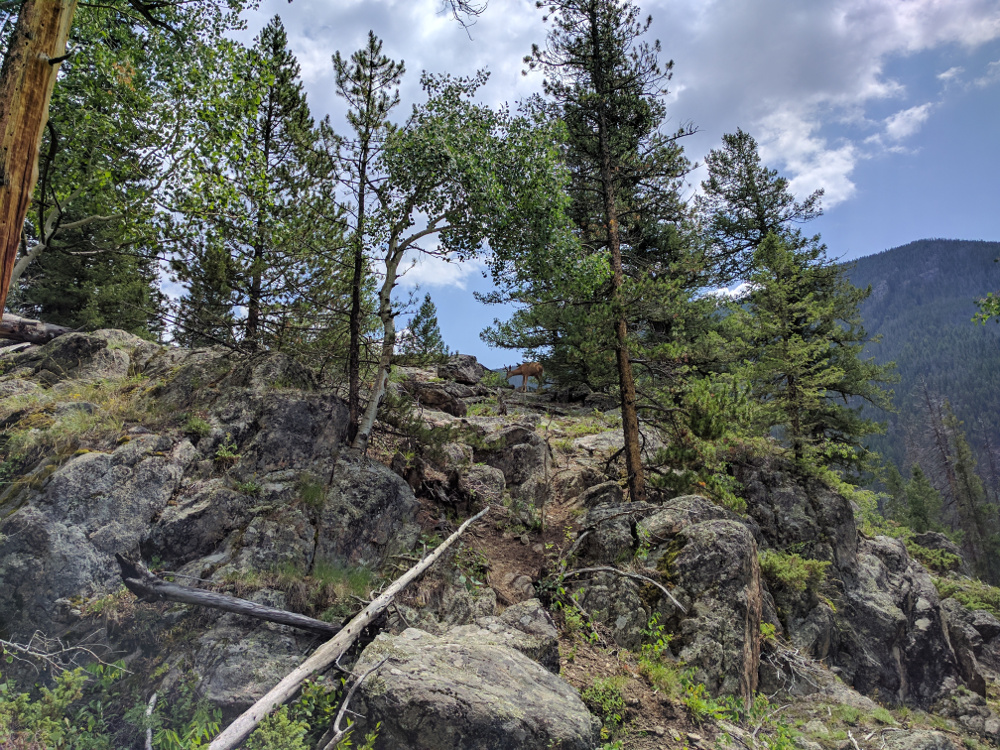 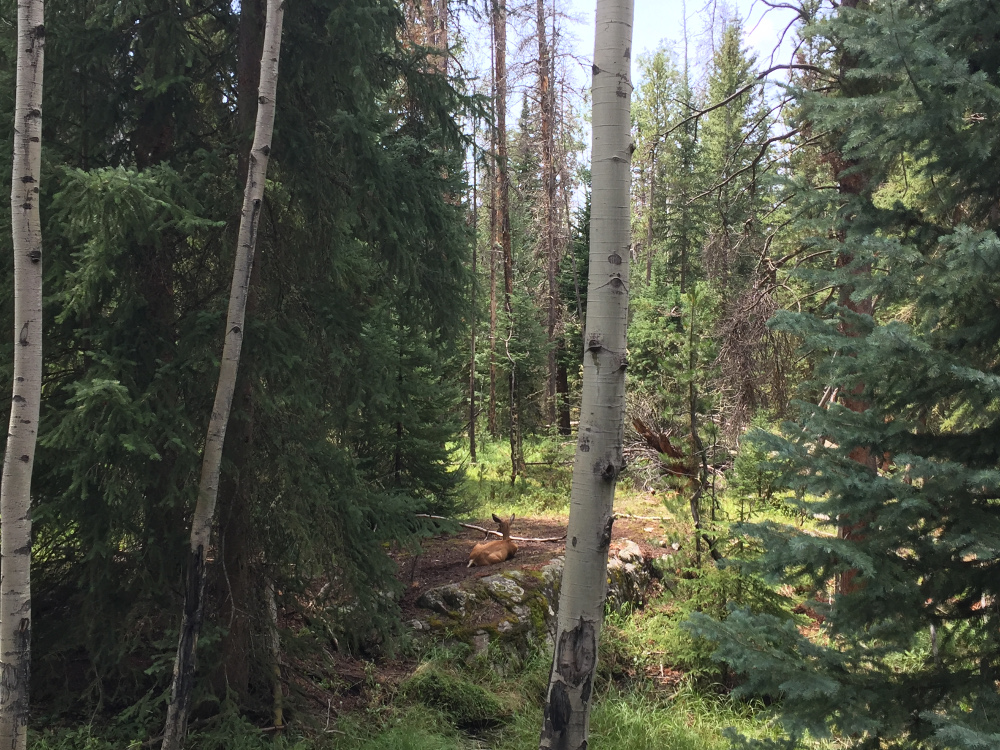 We got stuck in a thunderstorm about two thirds of the way up, complete with thunder, lightning and hail. Had to wait it out under a tree. The falls were beautiful!

Hail after the storm: 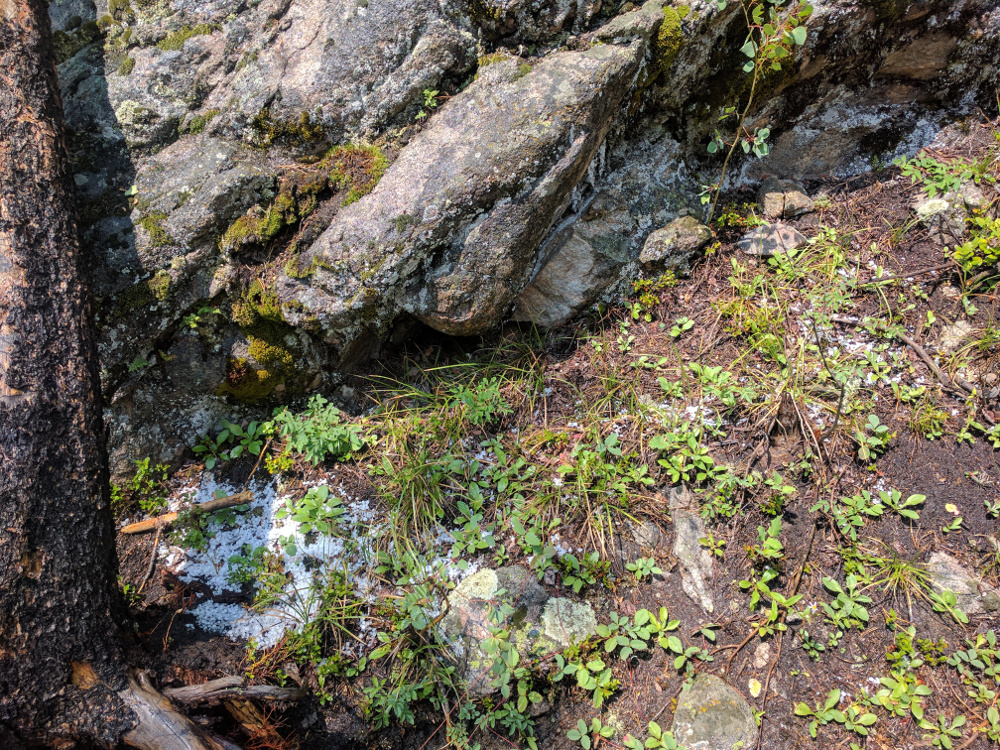 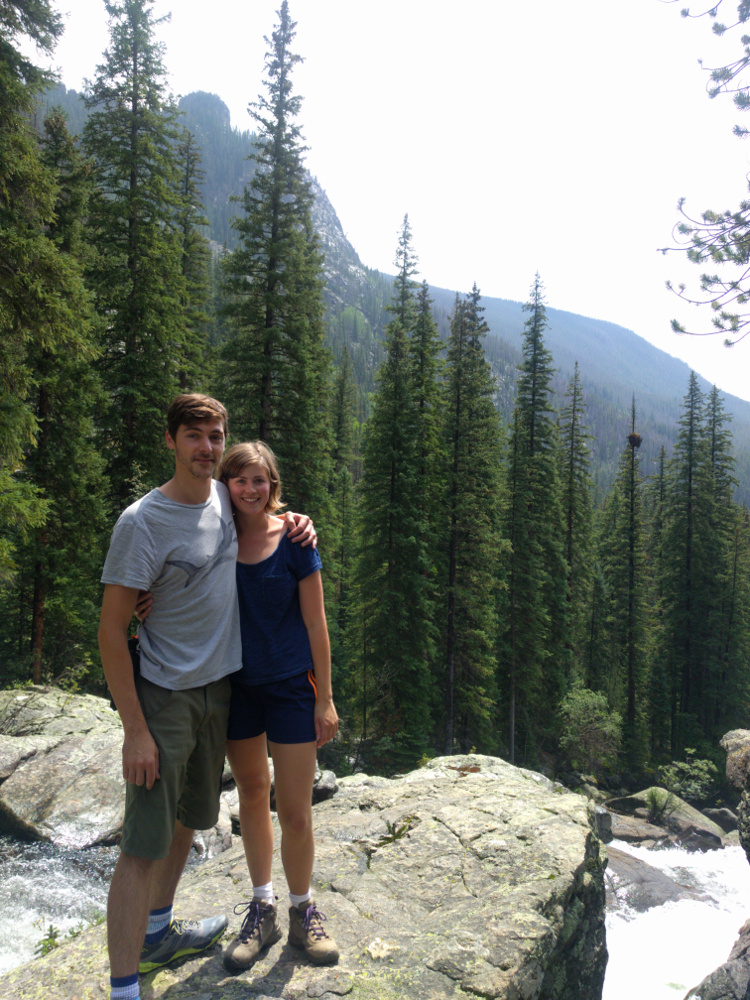 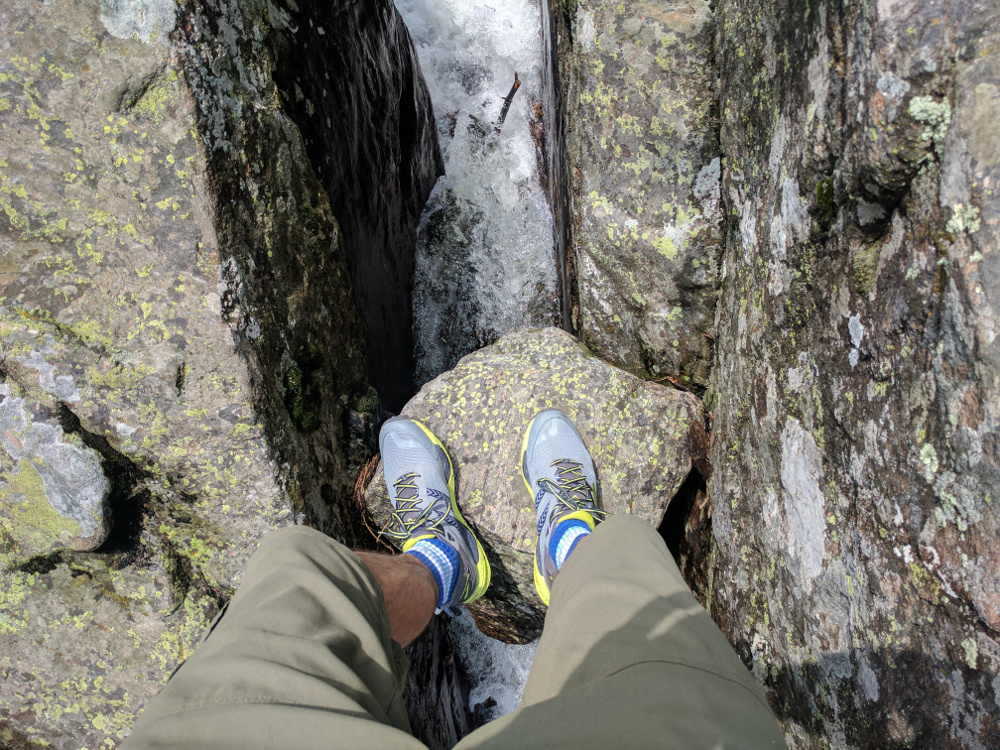 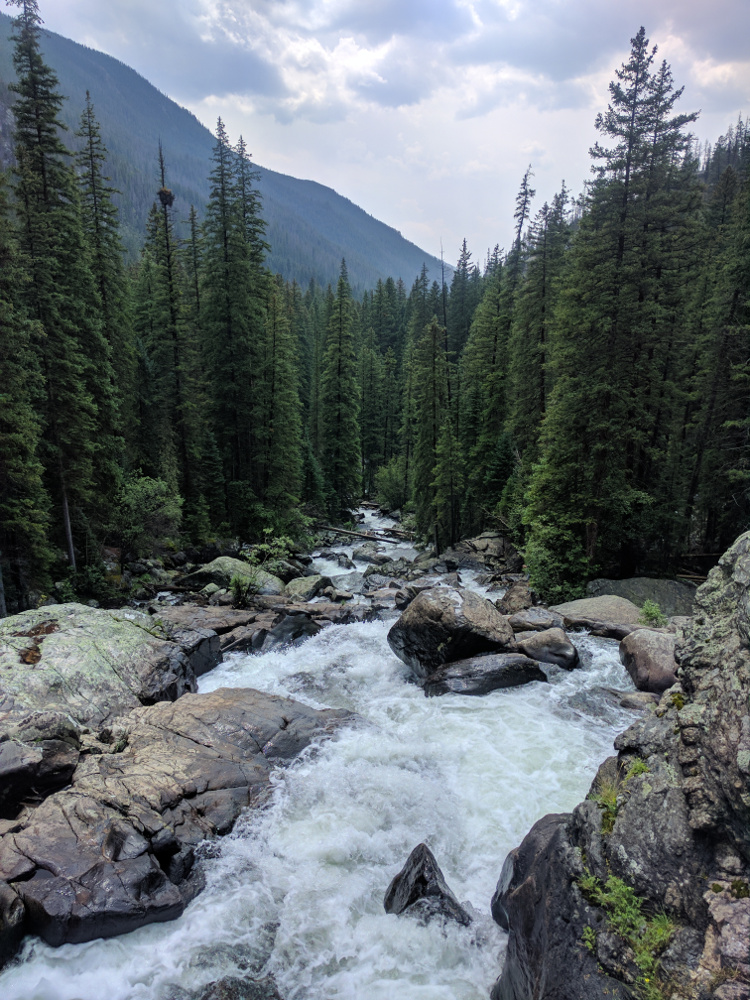 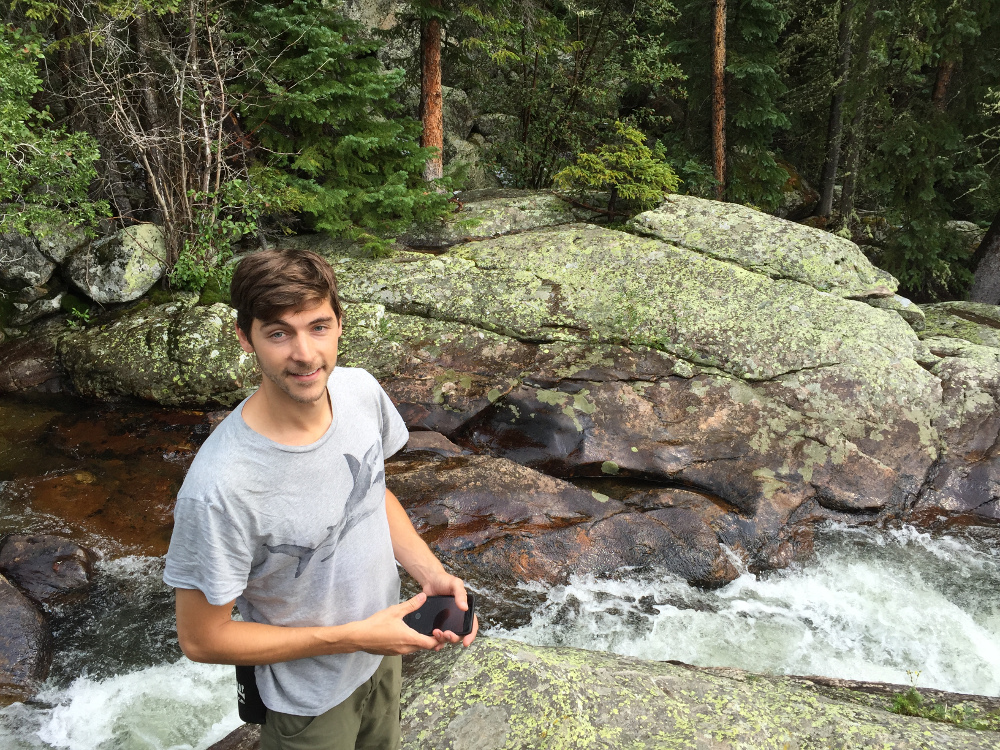 After the hike we had lunch at a deli in Grand Lake, a tourist/resort town for boating in the summer and skiing in the winter.

From there, we embarked on a long drive en route to Omaha, Nebraska.