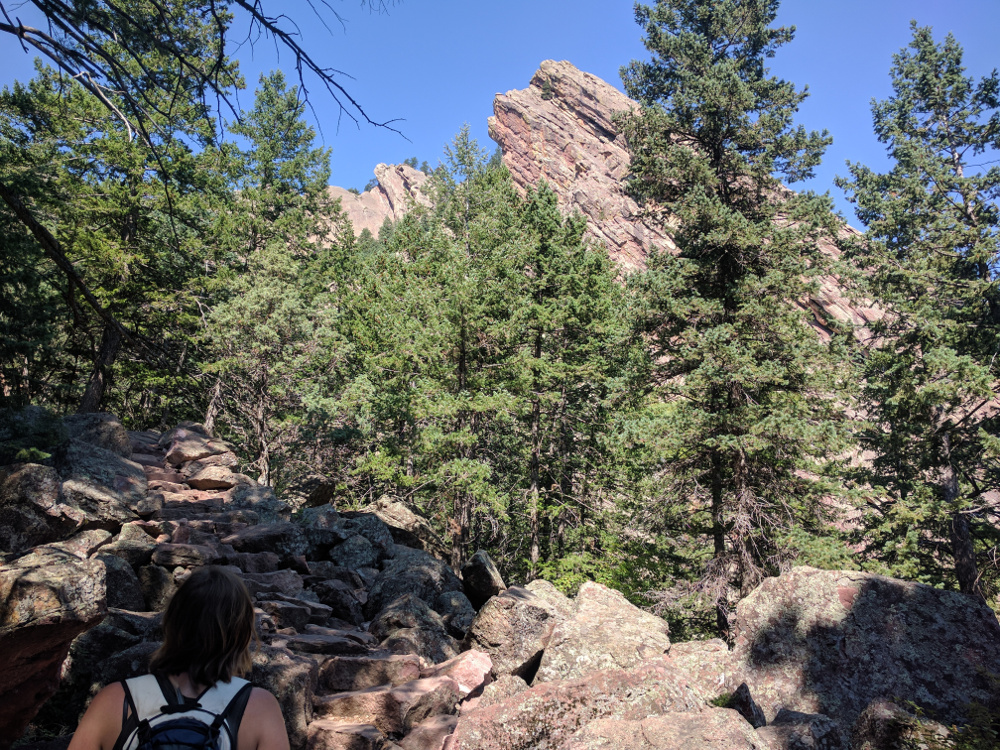 Friday morning, the 28th, we took a Lyft into Denver (about 20 minutes from Arvada) to hang out in the city. After exploring a bit down the 16th Street Mall, a pedestrian strip downtown, we went to the Tattered Cover Bookstore and had lunch at Sam's No.3, a popular diner and cafe. From there, I went to the Denver Art Museum which was fun and nice to get out of the sun. I spent a few hours meandering through the museum, which was similar to the Seattle Art Museum in that it spanned from ancient art to Contemporary. 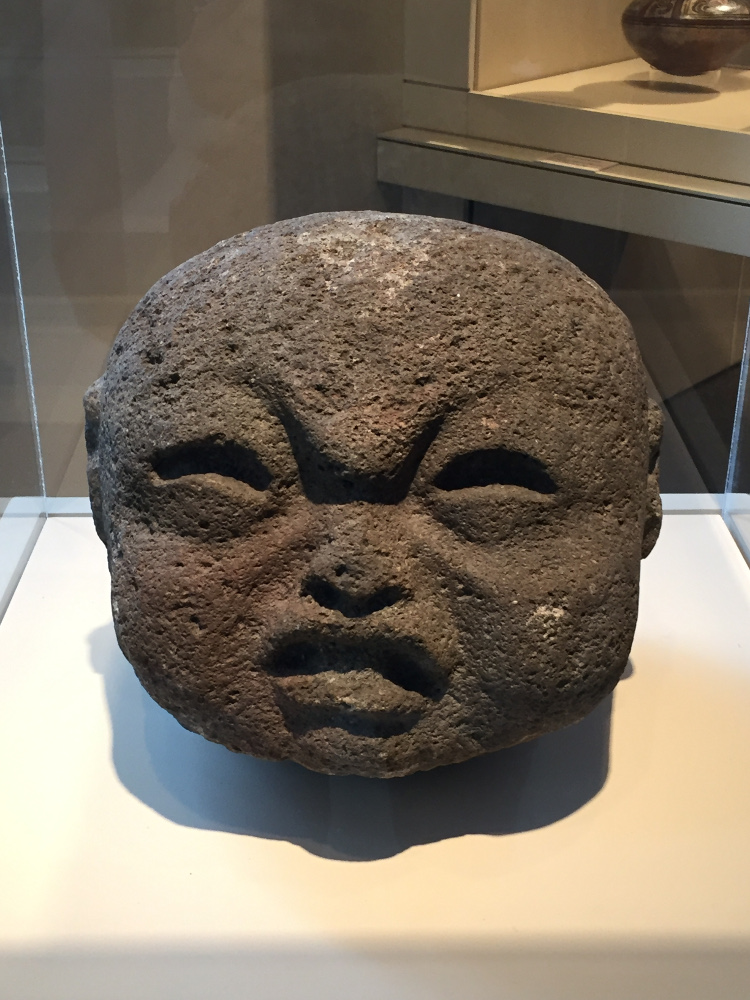 Later on we met up in an area south of downtown, Capitol Hill maybe is what the area is called, where a music festival was going on (Underground Music Showcase) and where our friend Phil was playing a show with his band Khemmis around 8pm. 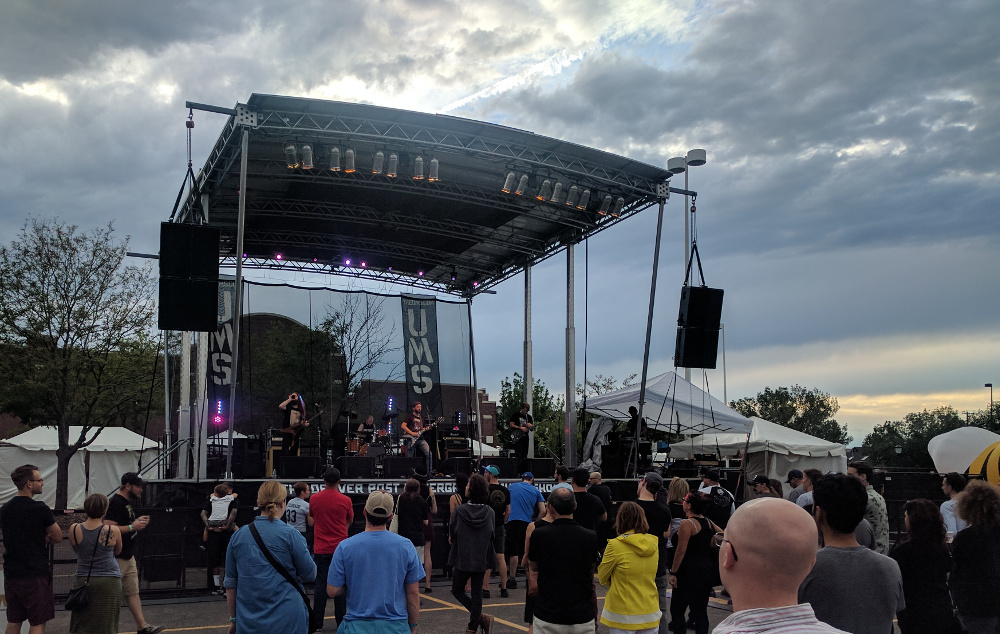 It a little rainy but a great show. Afterwards we had a couple beers with Phil then Lyfted back to Arvada.

On Saturday we mainly bummed around Denver and a nearby community college (Dan took his bike to a bike shop), then met up with Dan's cousin Miranda and her friend for lunch at Henry's Tavern (same as the one in Seattle).
After lunch we drove back up to Longmont to stay at the Boulder County Fairgrounds. 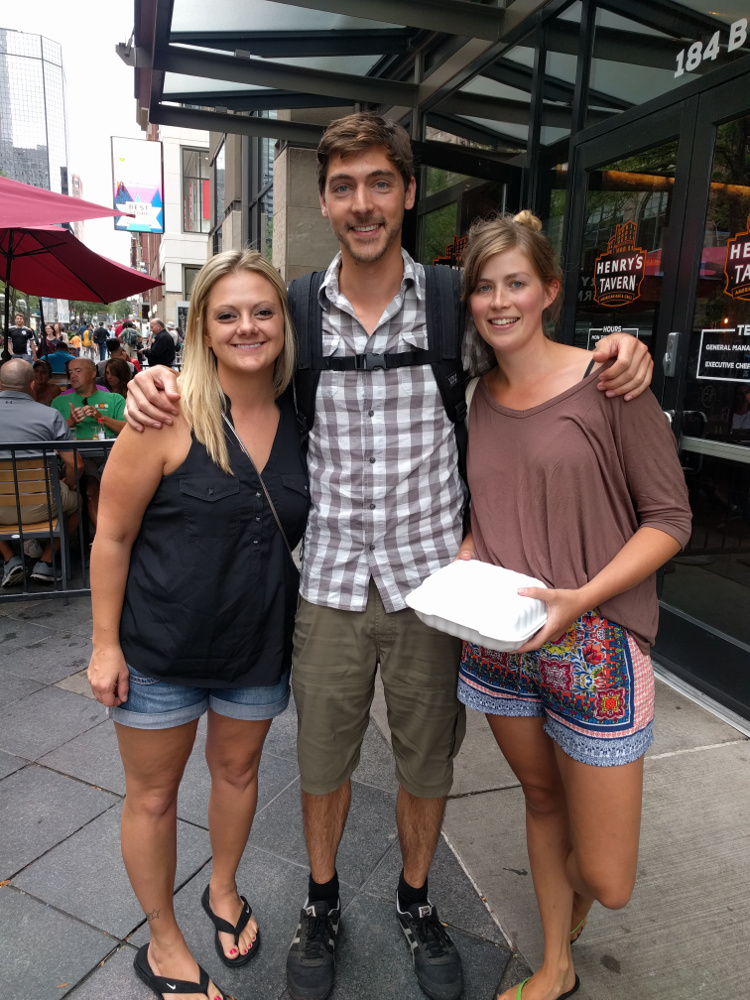 On Sunday we checked out of our campsite, did some laundry then drove down to Boulder, visiting the University of Colorado library for a few hours. While we were there I heard from Phil that him and his wife, Katie, were free so we headed back up to Longmont to their place for a delicious BBQ dinner and Oskar Blue's beers. I hadn't seen Katie since their wedding in 2011 and hadn't really spent time with Phil since college so it was really nice to catch up and hang out for the night. I hope they move back to Seattle area when we do so we can hang out more. We parked outside their house that night and slept in the van.

In the morning I got up and walked to a nearby salon to get a haircut (made the appointment a couple days before). Nicole, who cut my hair, had the same birthday as me oddly enough (and she did a good job on my hair). I met up with Dan after for coffee and a sandwich and we tried to figure out what to do, ending up back in Boulder to see the Pearl Street Mall (tourists, shopping, delicious burritos at Illegal Pete's) and then rode bikes along Boulder Creek after struggling to find a good place to park. Lots of people were by the creek, though you can't tell by the pictures, fishing, swimming and tubing. 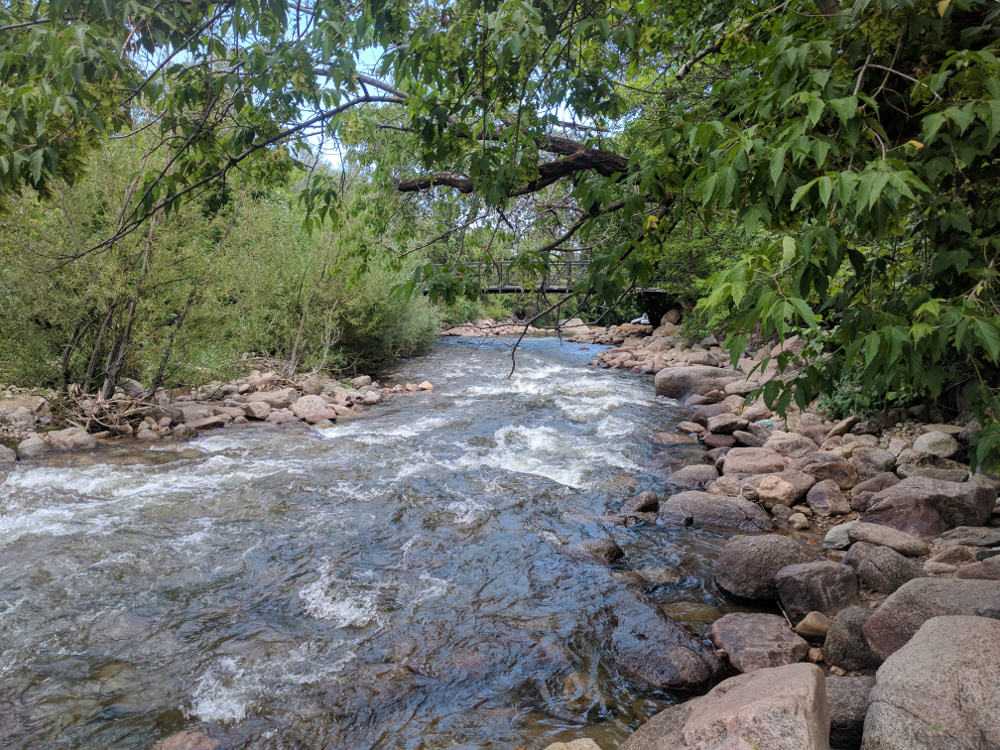 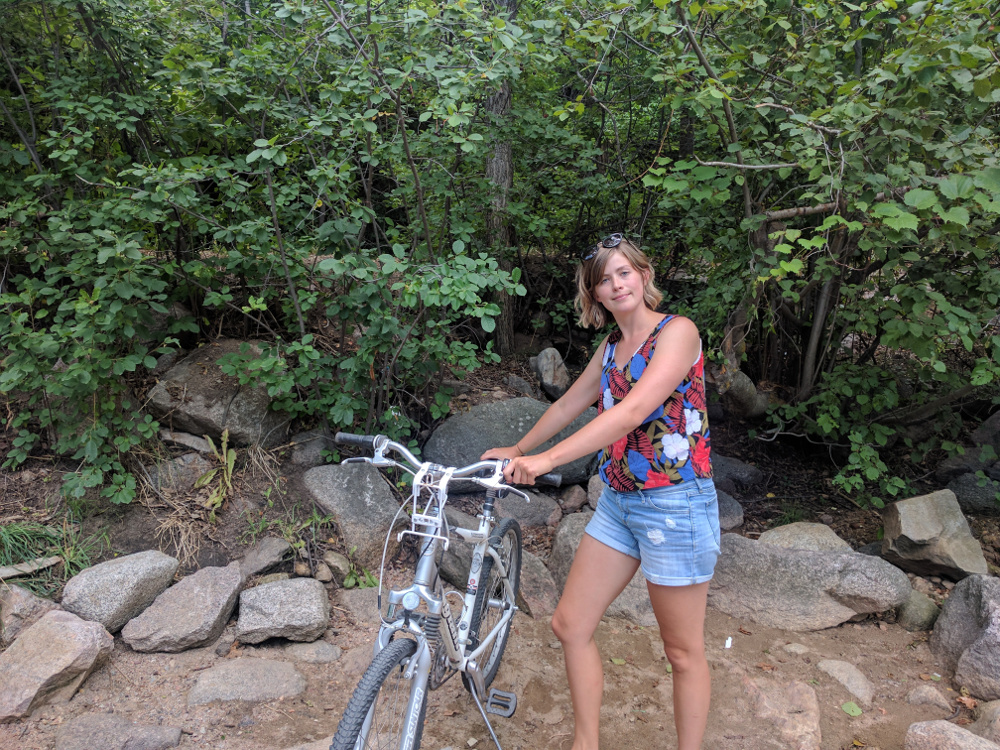 We parked stealthily in Boulder that night in a neighborhood, which works but is not always the most comfortable, mainly because you think someone will be suspicious of you. However, I have learned that most people are in their own world and as long as you don't look creepy or dangerous (which we obviously don't), they'll pay no attention. 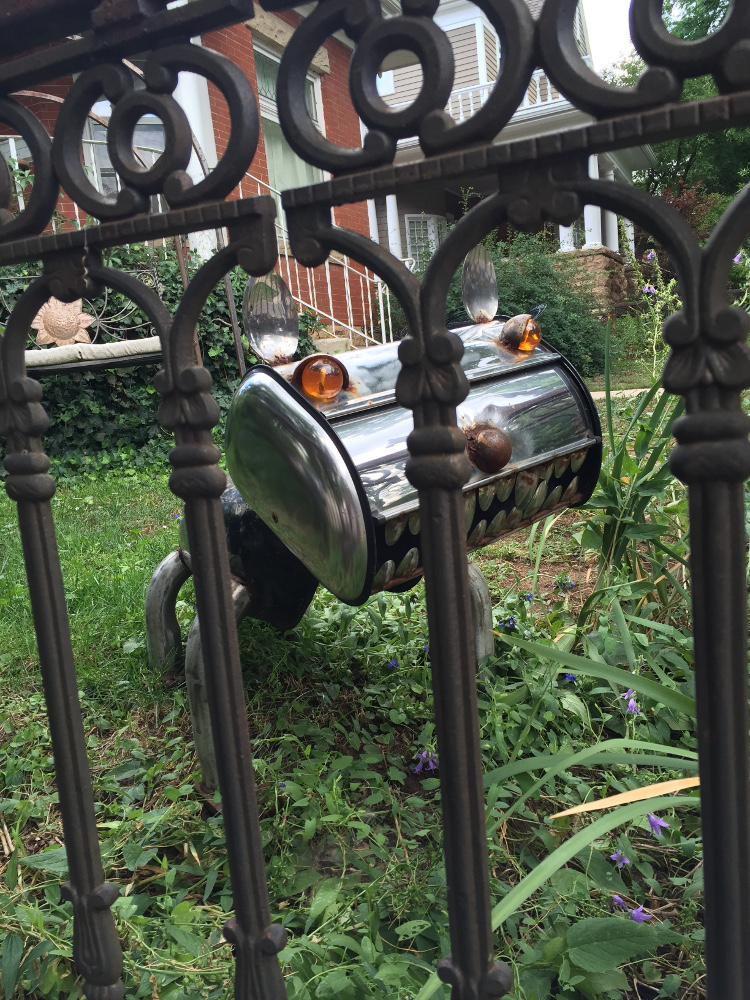 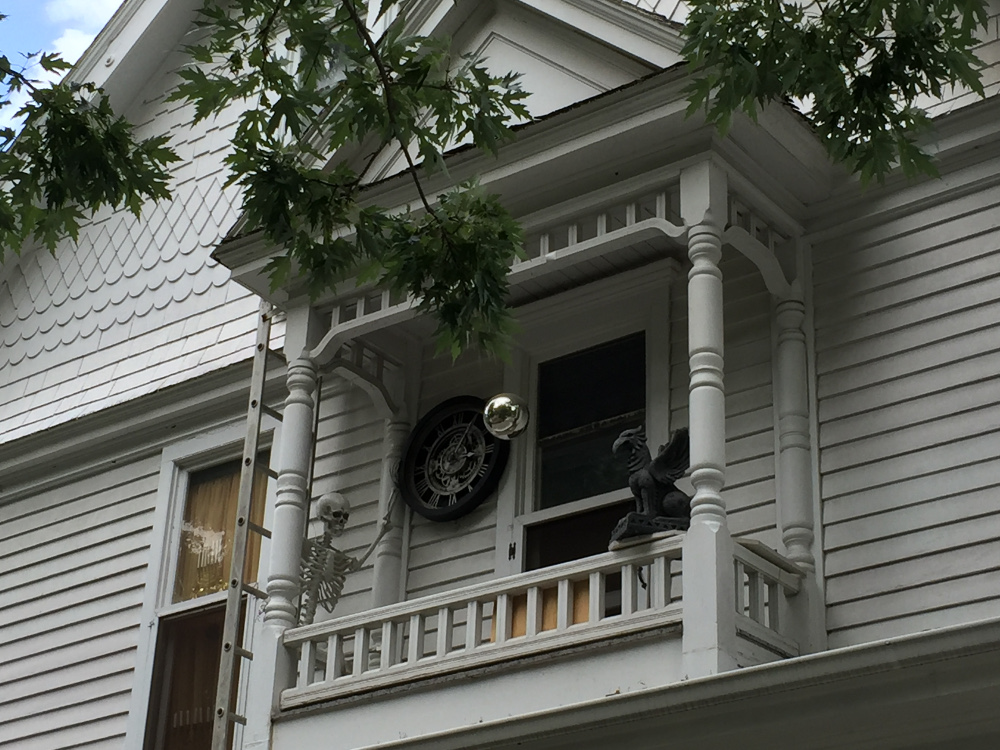 Tuesday morning we got up early and drove out to a trailhead to make breakfast. It was a beautiful day. We hiked up near the Flatirons outside of Boulder to Royal Arch, a natural rock formation. It was surprisingly busy for a weekday (again, you can't tell by the pictures) but very pretty at the top. The hike was steep and harder than some others we have done so far, in part because it was quite hot out. 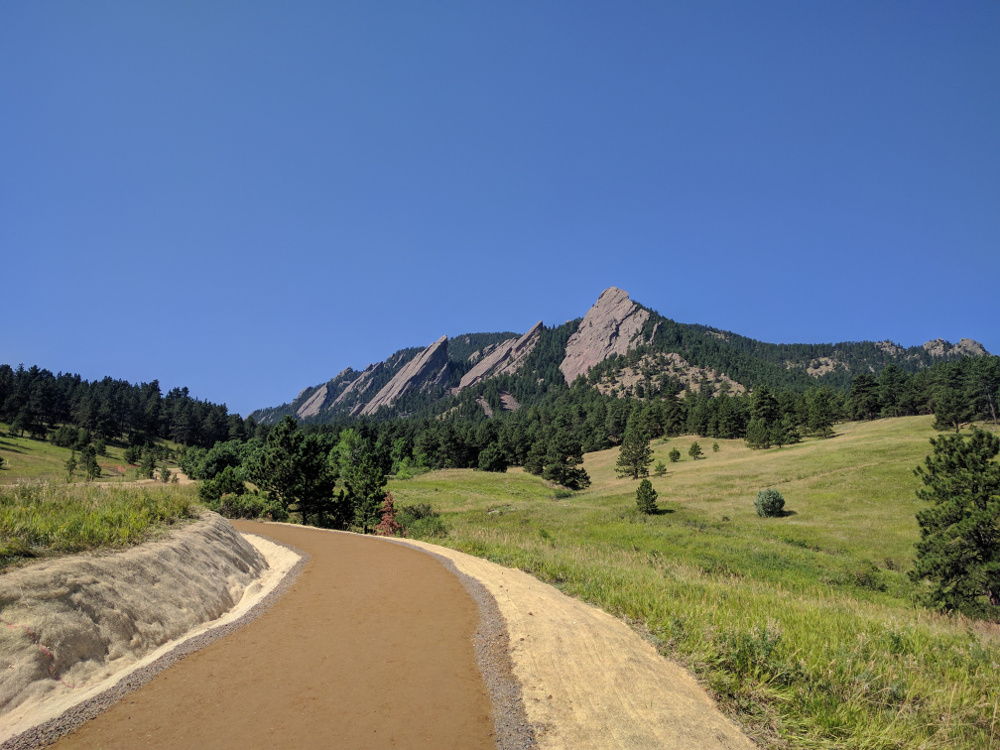 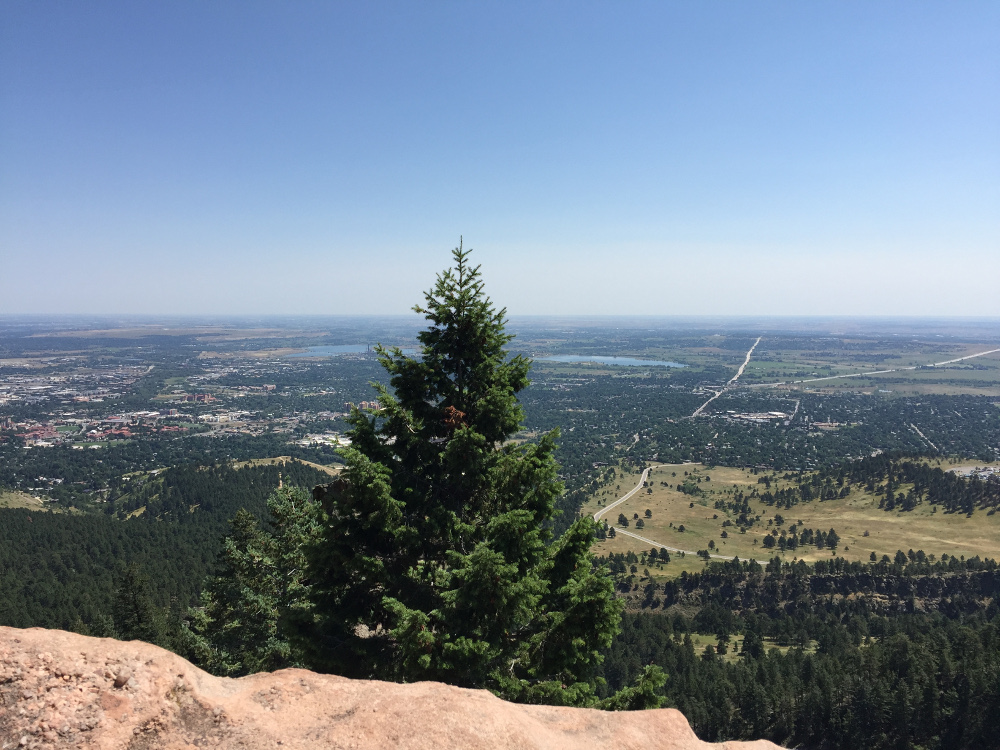 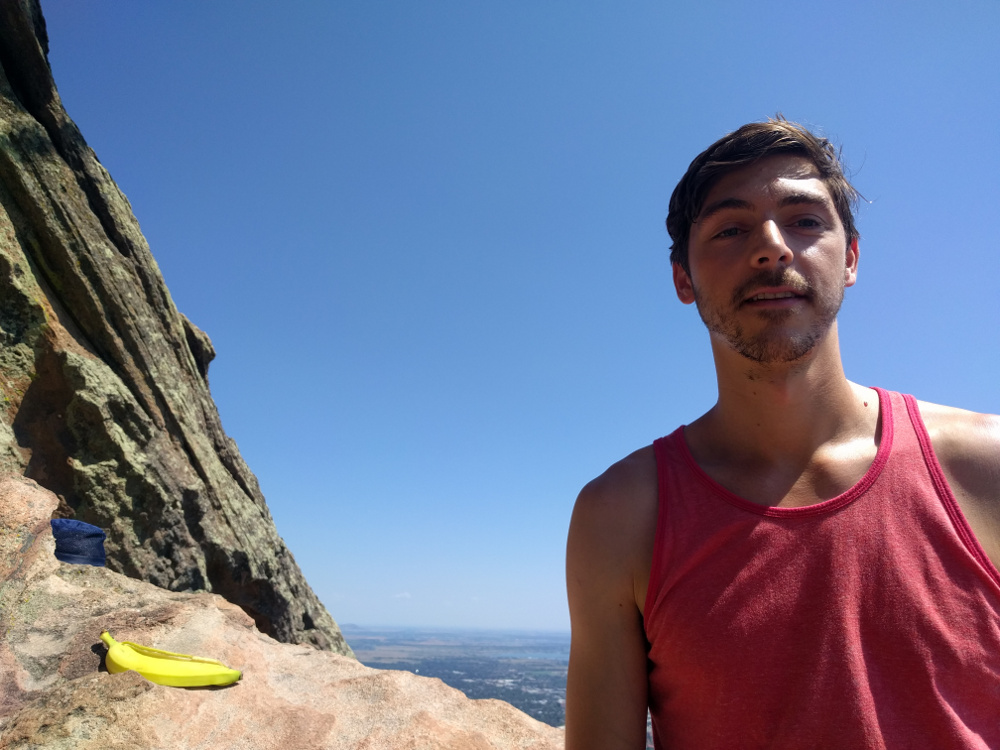 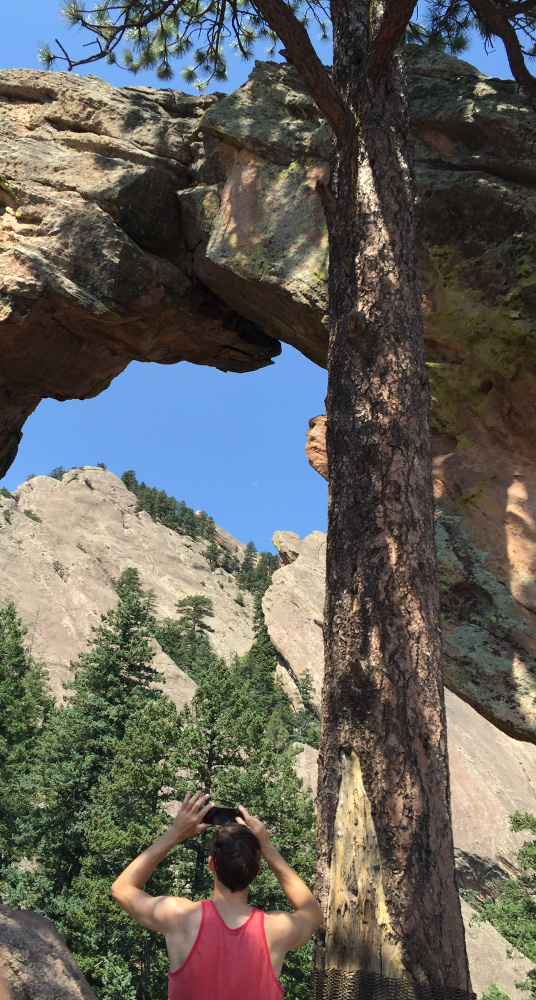 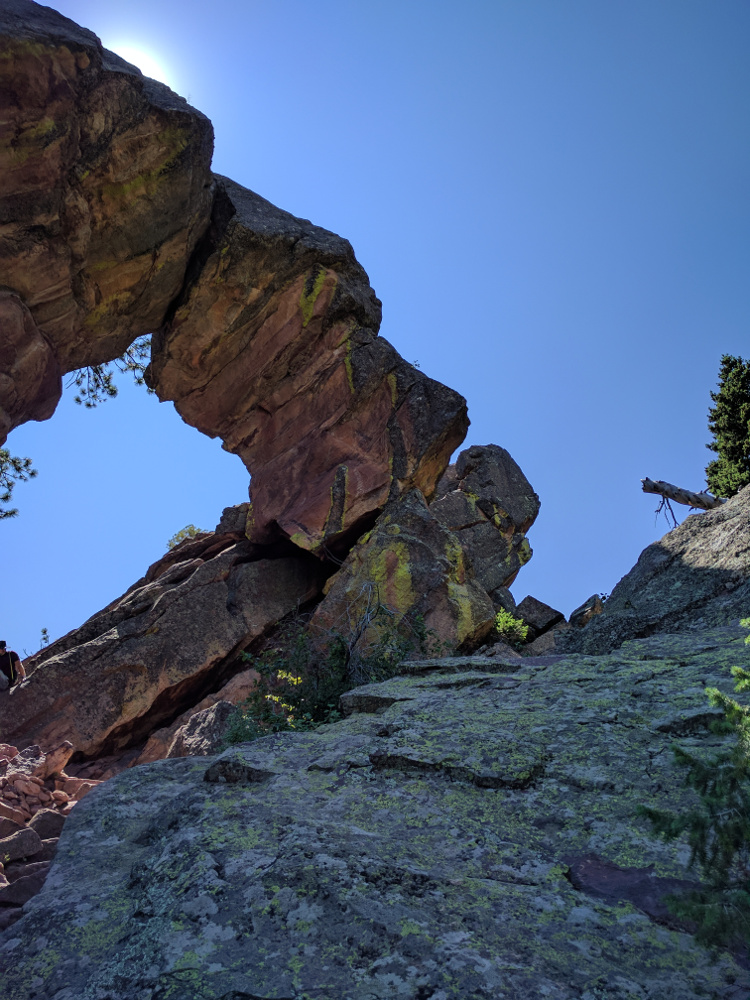 Afterwards we visited the National Center for Atmospheric Research nearby, which is a scientific research center primarily but has a visitor's center and small museum with informational displays throughout the building, mainly about weather systems and climate change. You can touch a cloud. The building itself was designed by I.M. Pei, the architect who is responsible for the famous glass pyramid at the Louvre. 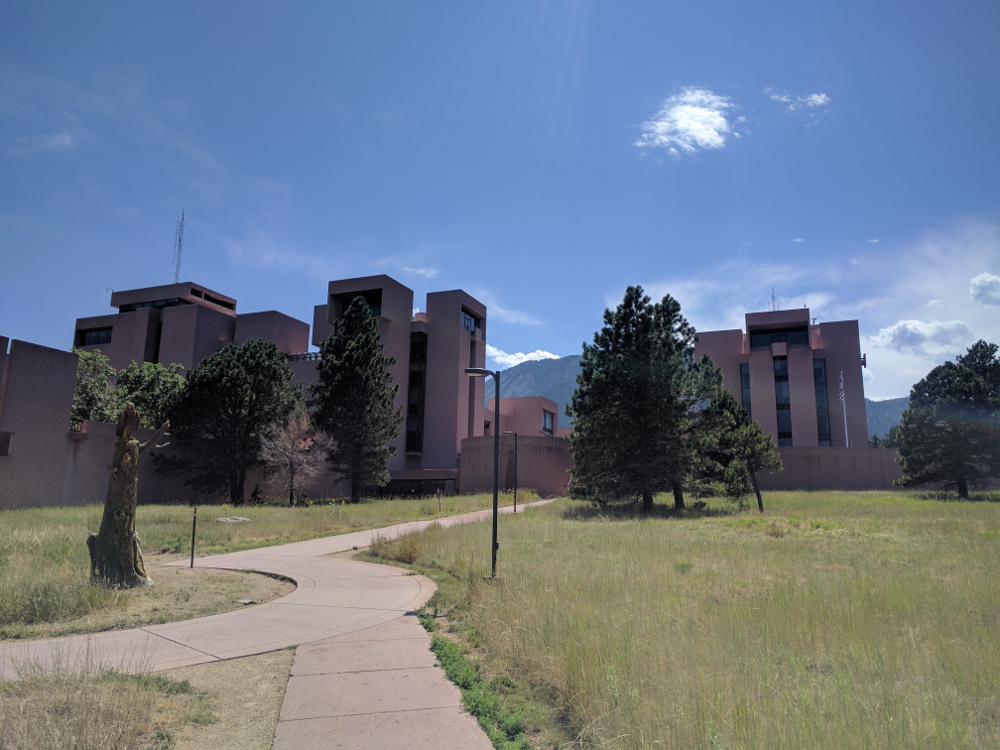 From there we headed on our way back to Longmont, stopping at Avery Brewery to try a couple beers, which of course were good. That night we stayed at the fairgrounds again, meandering over at night to check out the fair. It was OK (horses) but also gave me the creeps.

Least creepy part of the fair: 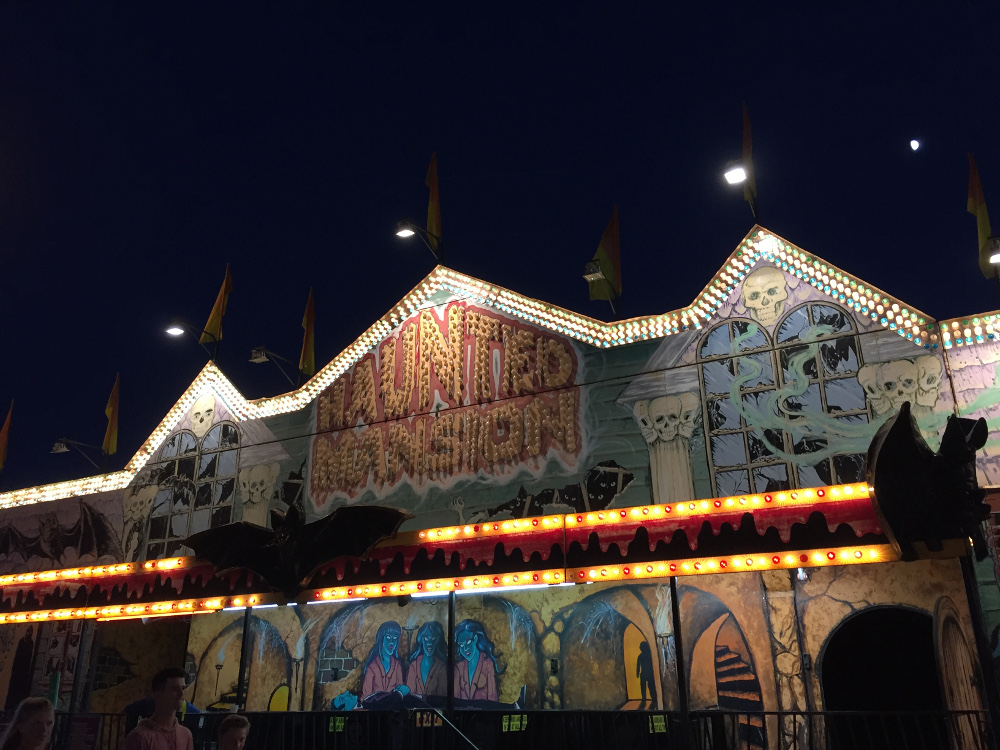 So the next day (Wednesday) we woke up in Longmont and most notably got massages. This was my birthday gift from Dan (he had one too). It was great. Afterwards we went north into Fort Collins after lining up another Boondocker's stay for the night, hanging out at a coffee shop for a while to wait out the intense rain and thunderstorm that was going on. At that point it was the worst storm we had seen so far just in terms of rainfall. The roof of the cafe was leaking, water dripping on students and their laptops.

When we were in Longmont, Katie had told us about a bar where her sister was working in Fort Collins called Blue Door that had a Twin Peaks kind of vibe and “edible cocktails,” aka fancy jello shots. This intrigued me. We went to go see what it was all about and it did not disappoint. 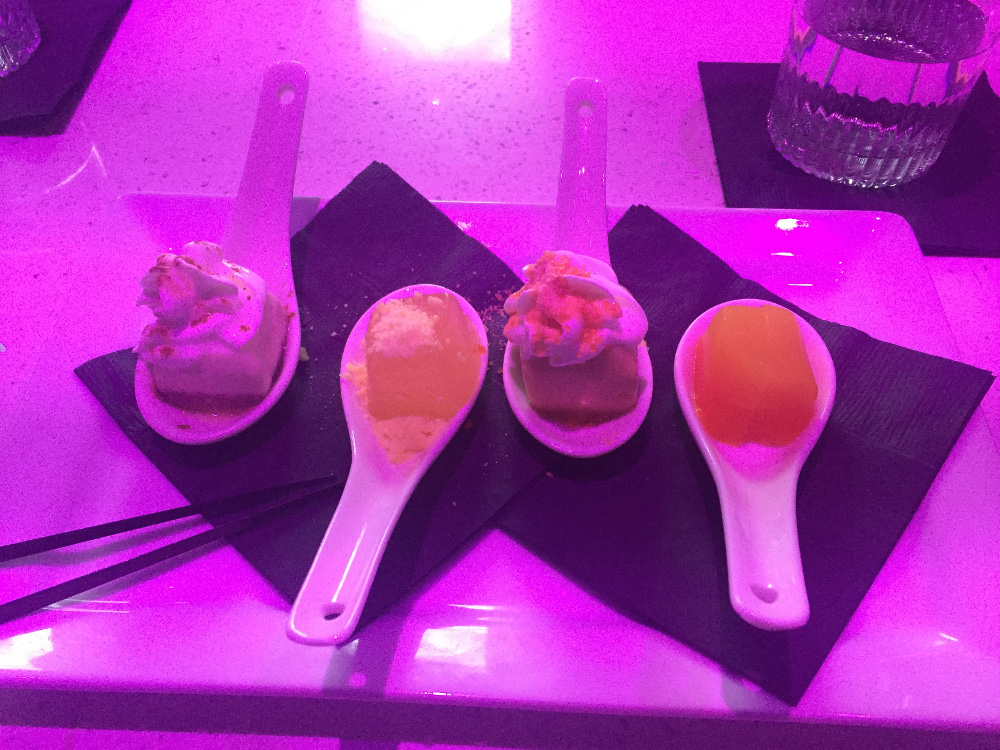 Our Boondocker's stay that night was kind of strange - it was street parking at the end of a cul-de-sac and no one came out to greet us when we showed up, so it just kind of felt like we were blocking the neighbors space but oh well. We got out of there at 7am before the garbage truck showed up, embarking on a very important day, my birthday!

Next:  Stanley Hotel and Rocky Mountains