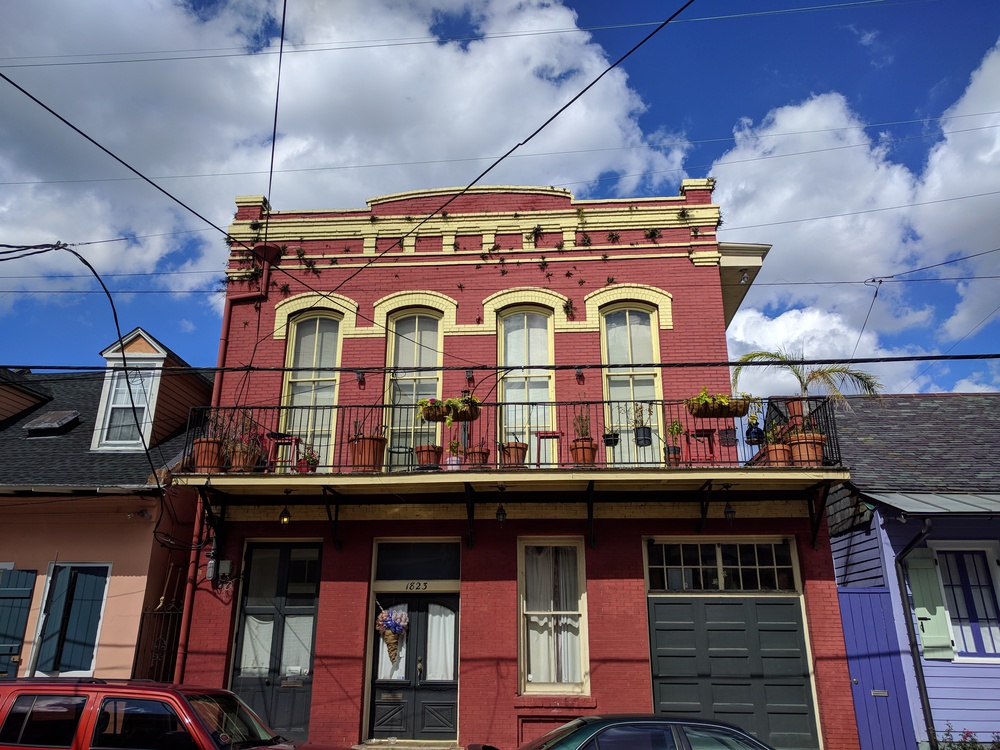 After finally leaving the very large state of Florida, we breezed past the small pieces of Alabama and Mississippi that touch the Gulf coast so we could get to New Orleans for Halloween, which sounded like an exciting prospect. 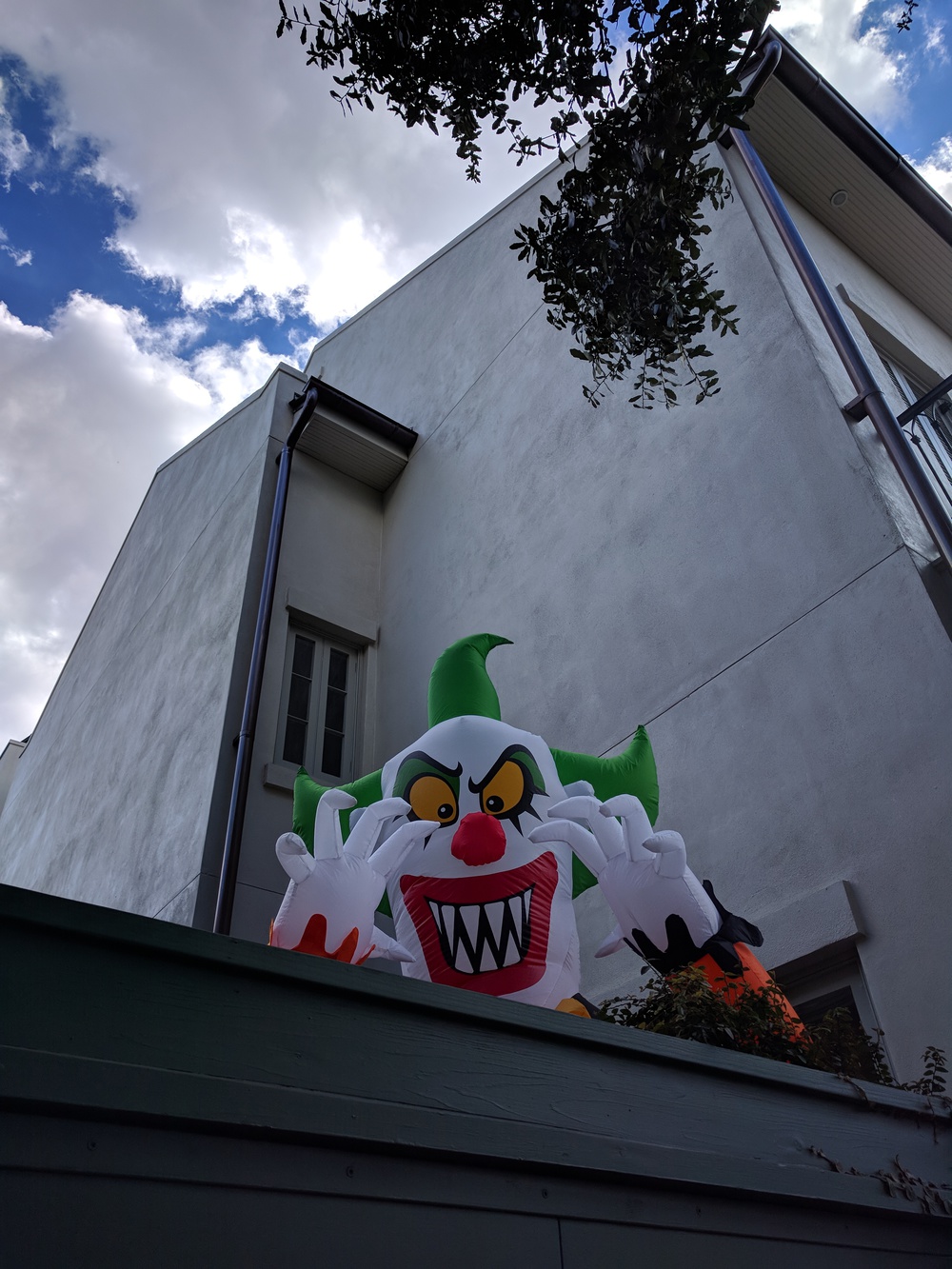 Rosie's friend Lea has lived in New Orleans for just under a year, and works for the National Park Service at Jean Lafitte park - the only National park named after a pirate! We were excited to see her and the city. After getting into the city fairly late the night before Halloween, we made a last-ditch effort at finding some kind of costume. Rosie and I ended up with oversized jack-o-lantern t-shirts, and green hats... At least we tried. Lea made last-minute preparations for a much more acceptable and classic mummy costume, complete with gauze, toilet paper wrapping, and death makeup. Back at Lea's house we hung out in the sun room for a while, then got to bed early out in our free street parking spot.

The next day while Lea was working, Rosie and I rode our bikes down to the French Quarter to see what was going on. It doesn't really matter what time of day or what day of the week it is, apparently, because there was plenty happening on a Monday afternoon. Some highlights were Beignets at the famous Café du Monde, lunch at the Napoleon House, old churches and buildings, and many musical performances on the street. There was a band consisting of about a dozen classic bluegrass instruments -- stand-up basses, guitars, banjos, fiddles and the like -- playing on a section of Bourbon street that was closed to cars. 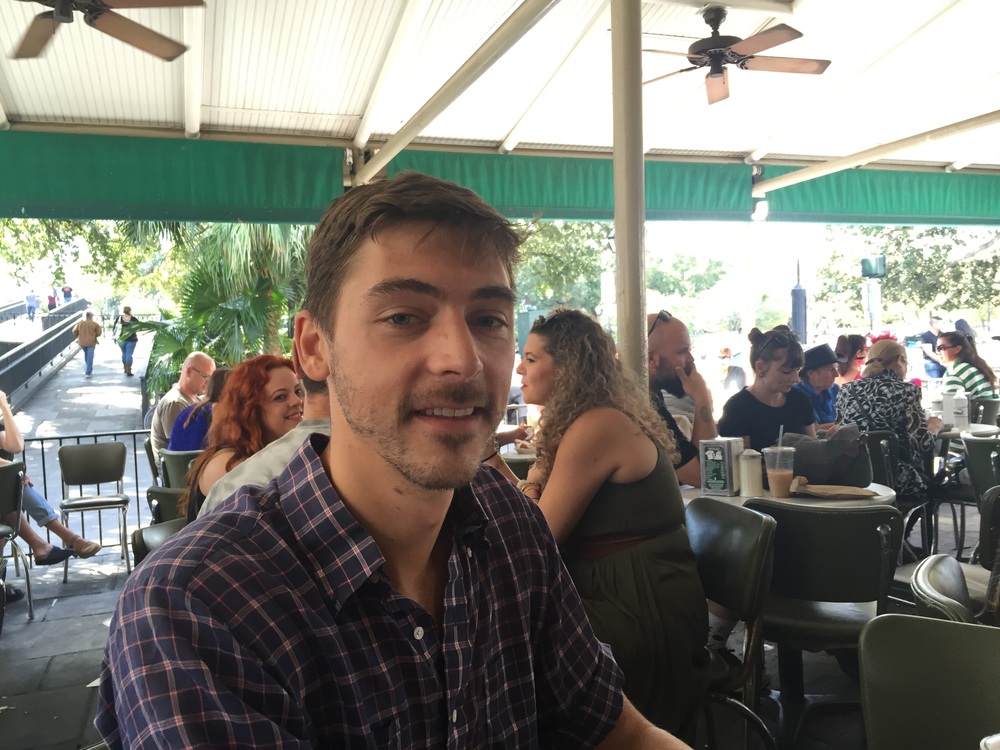 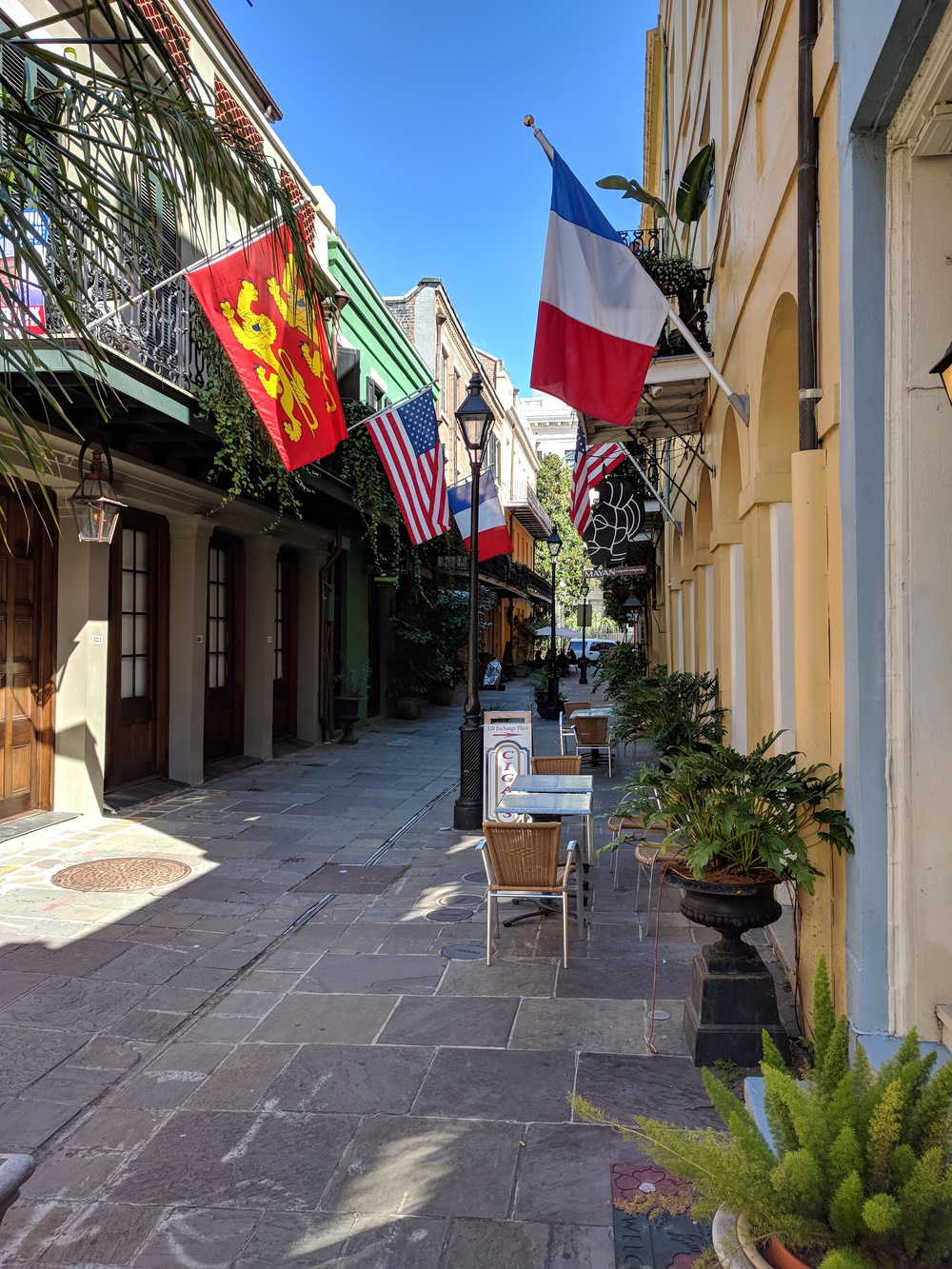 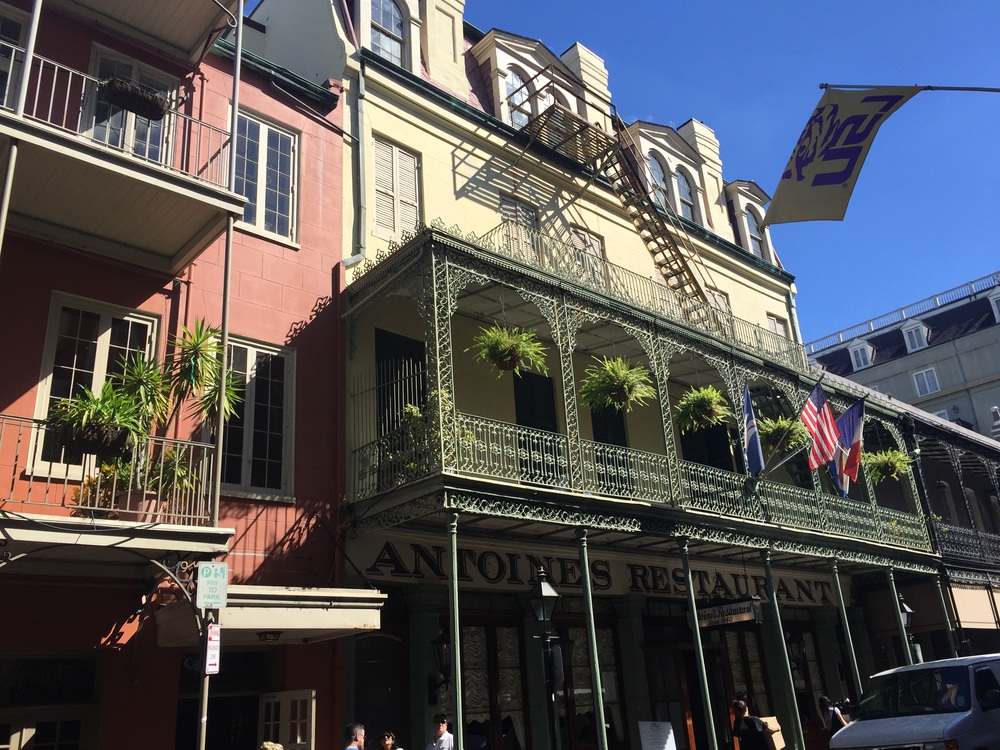 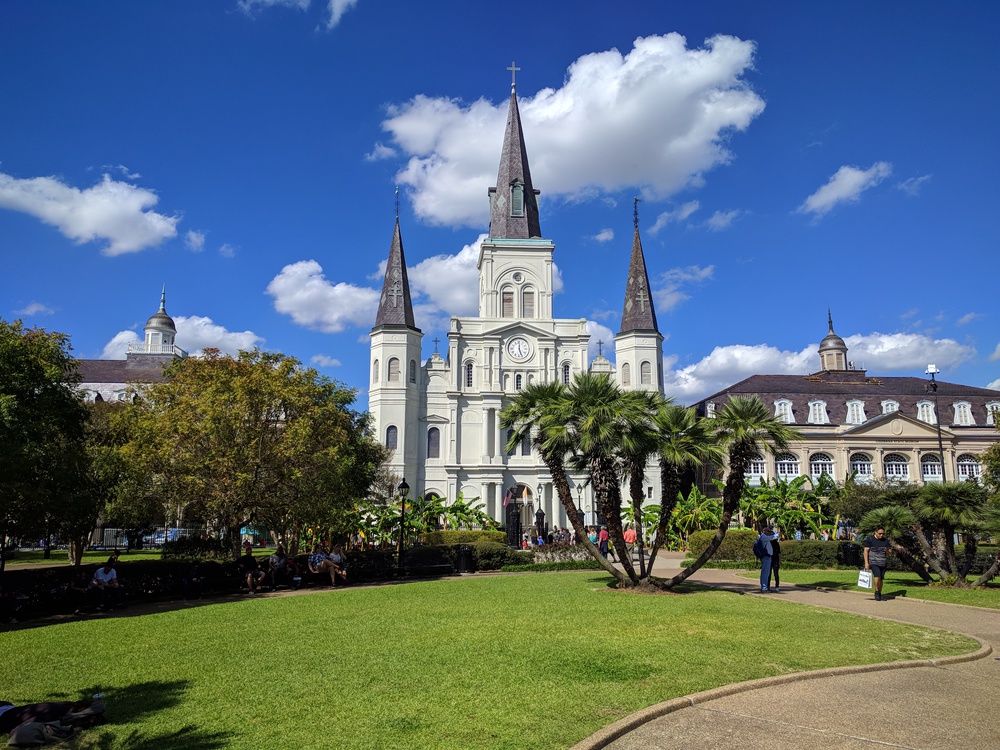 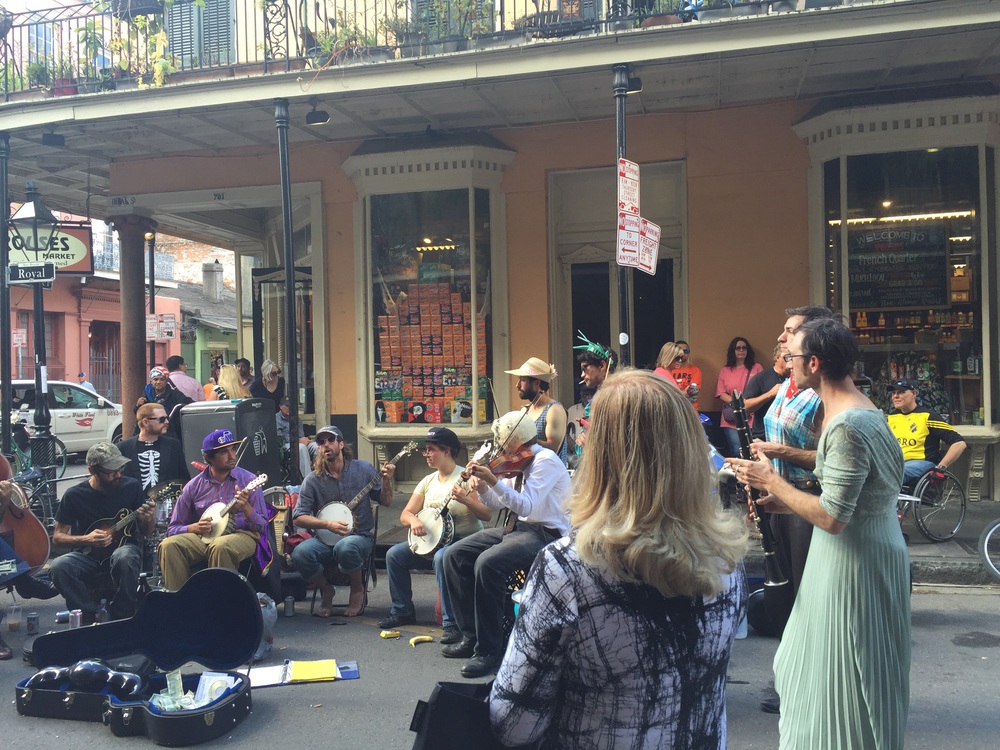 After lunch we went back to get our costumes and meet back up with Lea, who drove us back down to the Halloween festivities in the same area. It was definitely a different scene at night. The Halloween parade was brief but enjoyable, and there were some excellent costumes. We walked down Frenchman street for another beer and some food, which we were eating when an entire marching band showed up on a street corner and basically just started a party. 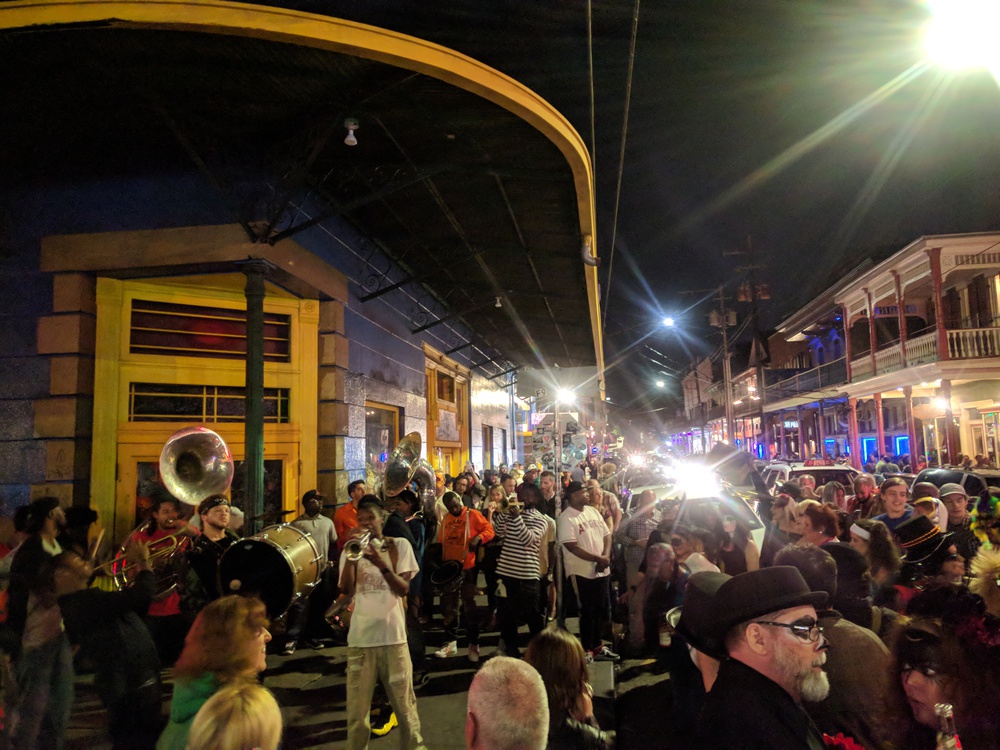 After the parade and festivities we went to a party hosted by some of Lea's friends. On the way, a random man on a balcony gave my half-assed costume a "D for effort". Sounds about right. 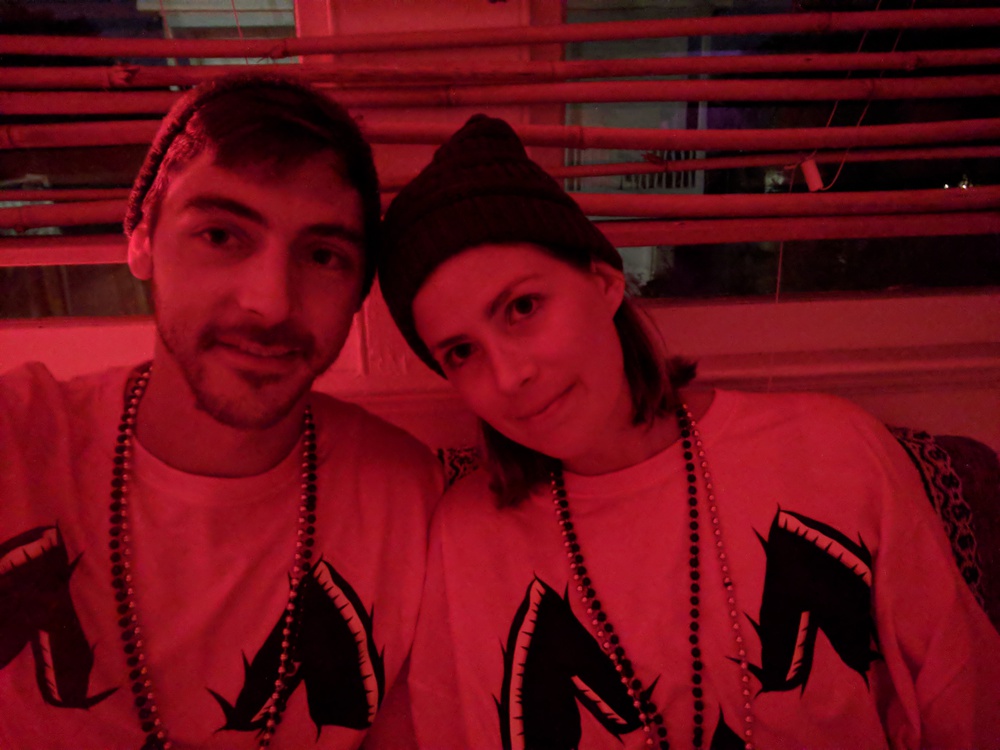 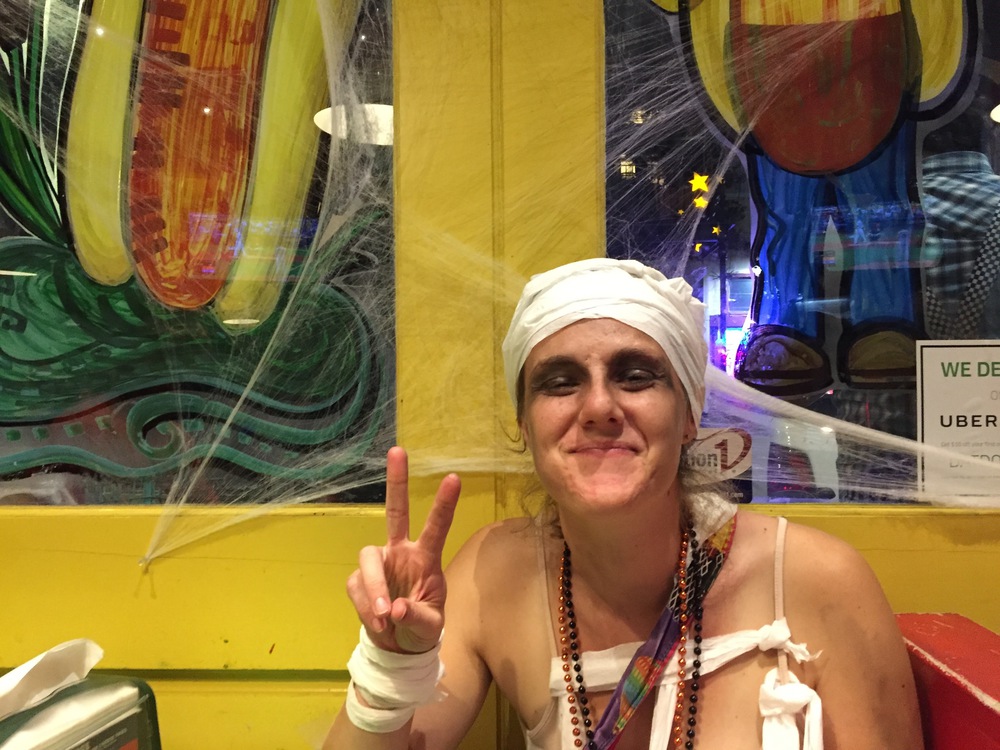 The next day we decided to go visit Lea at the National park, and we were not disappointed in our quest to see a Louisiana gator. Looks a lot like a Florida gator. The park had a nice boardwalk through many miles of swampy scenery. 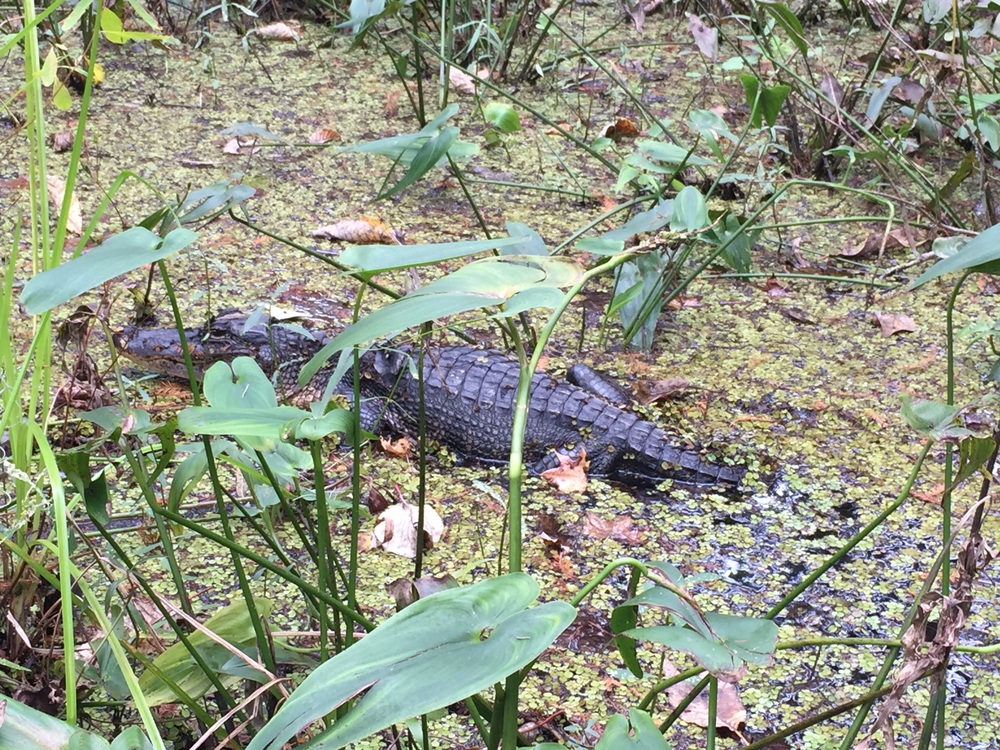 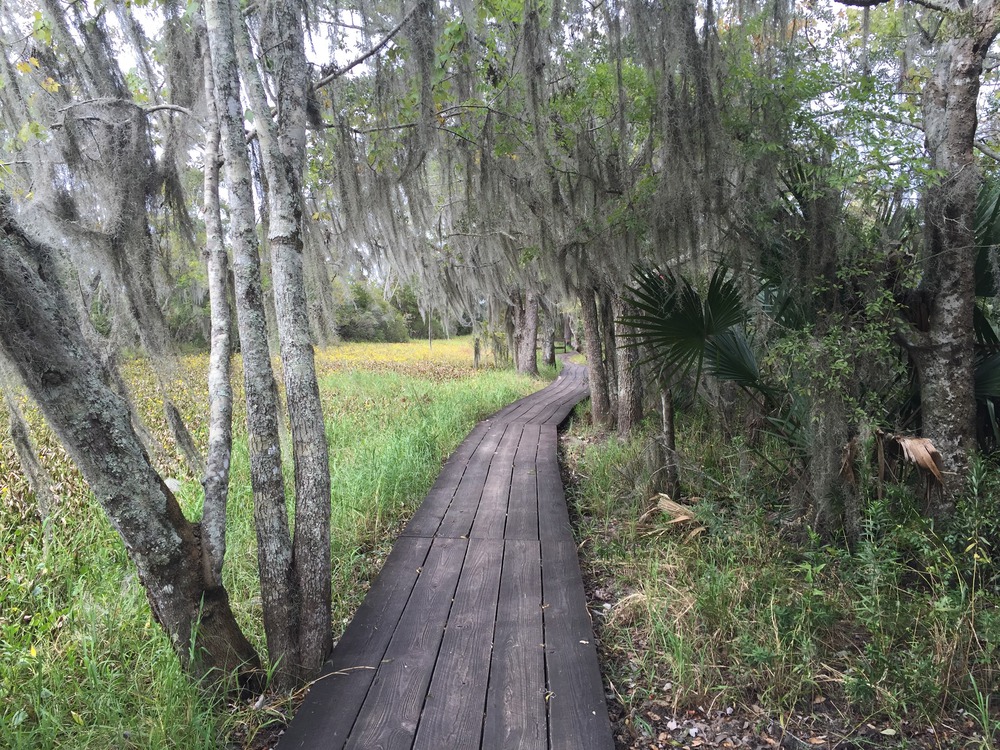 To break up the monotony of sleeping in the van on the street, we opted to stay a night in the Bayou Segnette State park nearby. Everything was good until the late evening, when the mosquitos came out in droves. Whatever you're imagining, it's not enough. Opening our van door for about 5 seconds led to the next 2 hours being spent hunting and killing all the mosquitos that got into the van. We decided we're starting to get a little tired of life in the swamp, and are looking forward to getting back West to a drier climate.

The next day we spent taking care of some van life essentials, like laundry and sitting around, and then decided we'd stay one more night so we could go back to Frenchman street and drop in to more of the music clubs. It was definitely more quiet on a non-holiday weeknight, but there was still plenty of live music, interesting people to talk to, and lingering halloween decorations. We even caught the tail end of a jazz festival in Armstrong park. 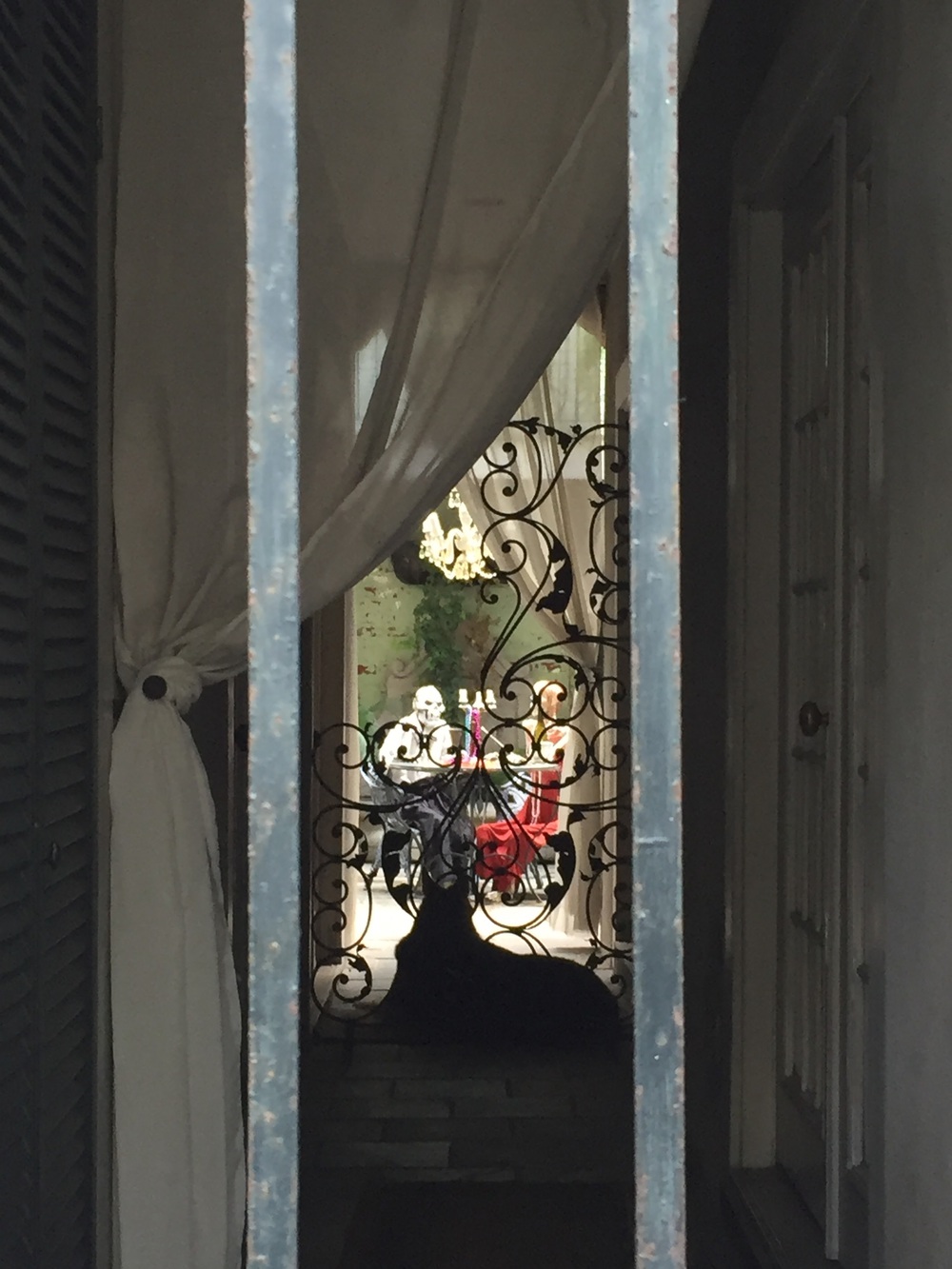 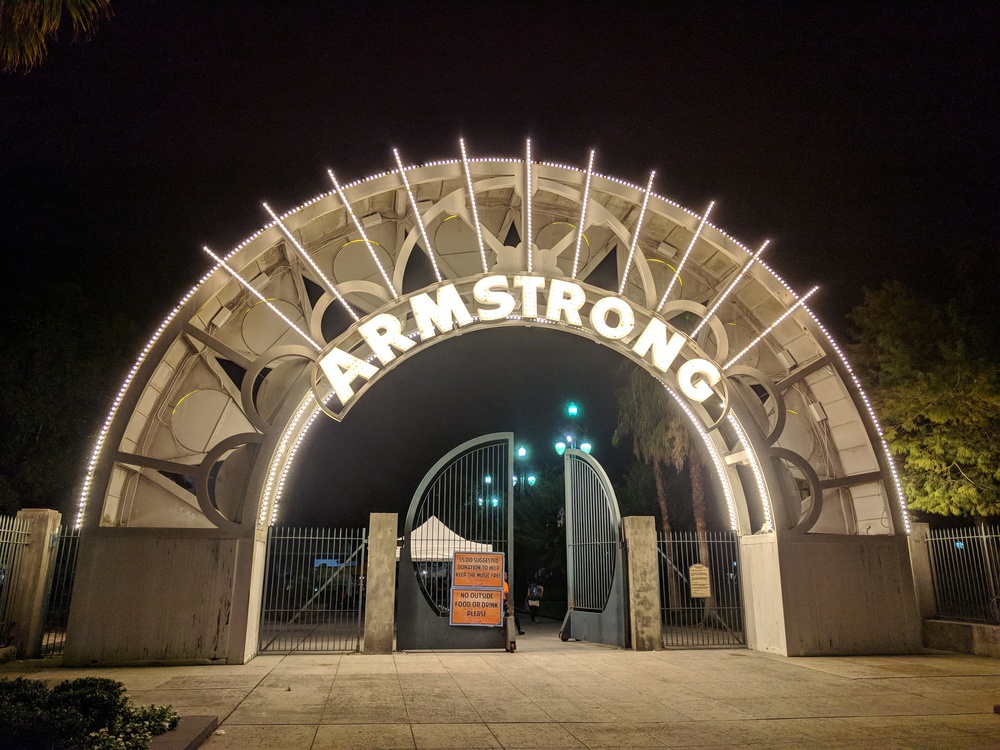 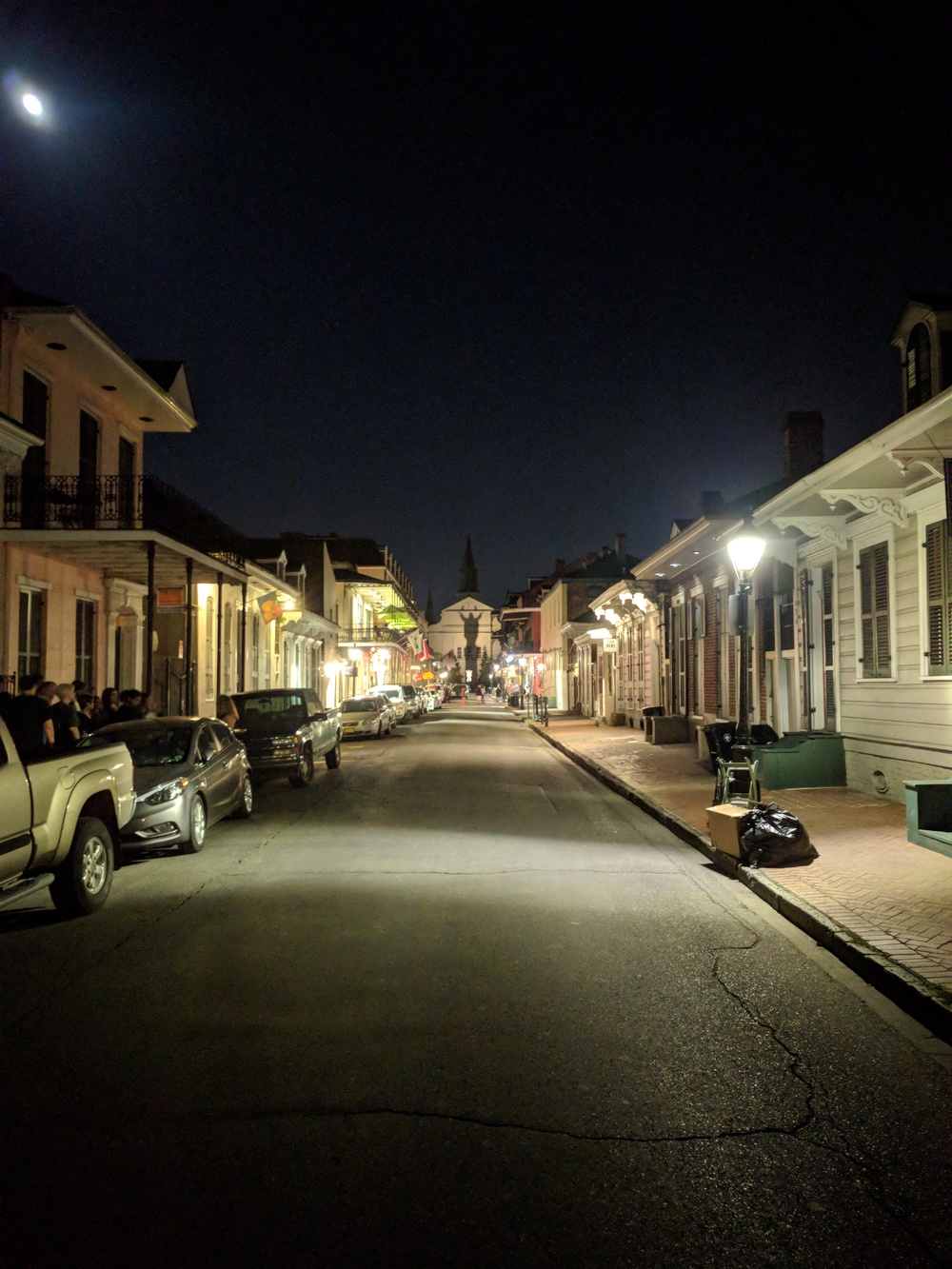 We were doing some souvenir shopping when we came across what I can only describe as a seemingly very authentic voodoo shop. It smelled bad, which we thought was due to all the bones, herbs, and weird tinctures that lined the shelves until we noticed the large live snake in a terrarium in the corner. The proprietor was a subdued man with very red eyes who, as I peered over his shoulder, was scribbling some kind of odd drawings in a notebook that looked like blueprints. On second thought, maybe altars? No pictures of this place because I didn't want a curse to follow us home. Weird stuff, man.

New Orleans was a great city to visit, but any city usually leaves us wanting to get back out to nature after a few days, mainly just because of the difficulty of maneuvering the van around narrow, busy streets. It has been nice to get a taste of all these different places, but even in the case of cities that we like a lot, like New Orleans, it has made more sense to us to make a mental note to travel back at some point in the future and stay in hotel, rather than continue to tough it out while living in our vehicle.

We left bound for Texas ready to get back into the rural country. Our first stop will be Galveston, a small island on the Gulf.

Prev:  Pensacola and the last of Florida