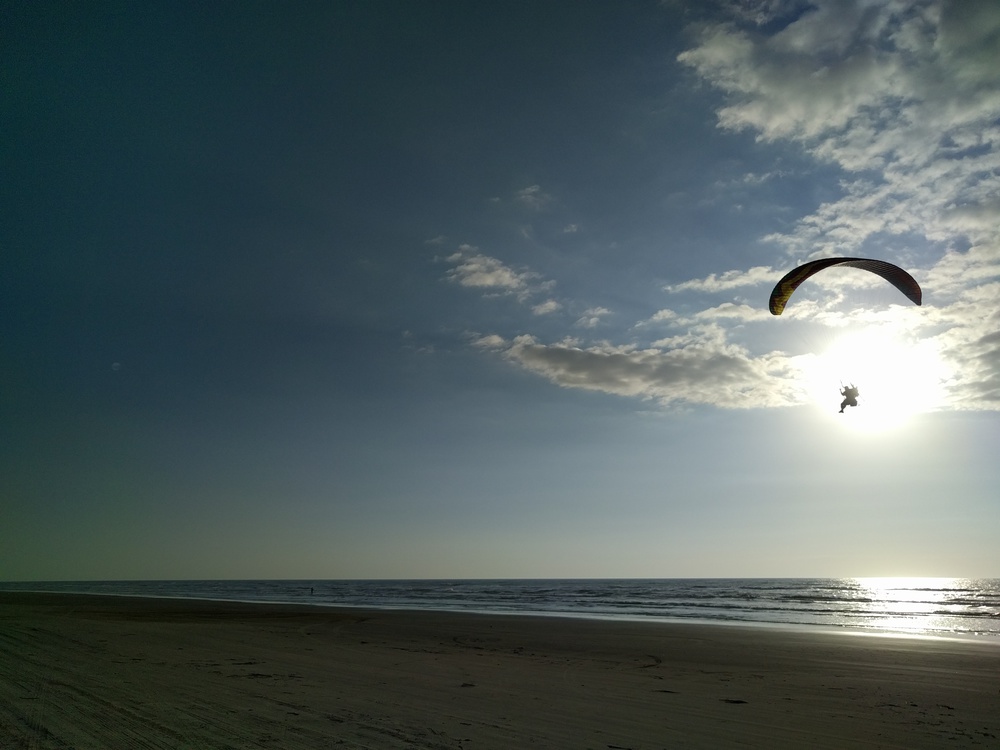 On our way to Texas I called up some distant relations of a friend of mine, who I met on a road trip about 12 years ago, hoping to meet up with them again in Galveston where they had a house. I remembered them as being an exceedingly nice and interesting couple who worked as art conservators out of a warehouse in Houston. Last time I visited them I got to see some of the art they were restoring, as well as some of the art being created in the warehouse that they shared with another artist. I thought Rosie would be interested to meet them and see what they do, and vice versa. Unfortunately the timing was bad and they were heading west to Miami just as we were heading east to Texas, though they did give us some good advice over the phone about what route to take, where to eat, and what to avoid. In that order - we took a free ferry instead of the interstate, ate at a small marina bar and grill just off the ferry (best fish and chips on the trip so far), and we avoided stopping anywhere in downtown Galveston because it was the weekend of the Lone Star motorcycle rally, and we were advised that this would be chaos.

The ferry into Galveston: 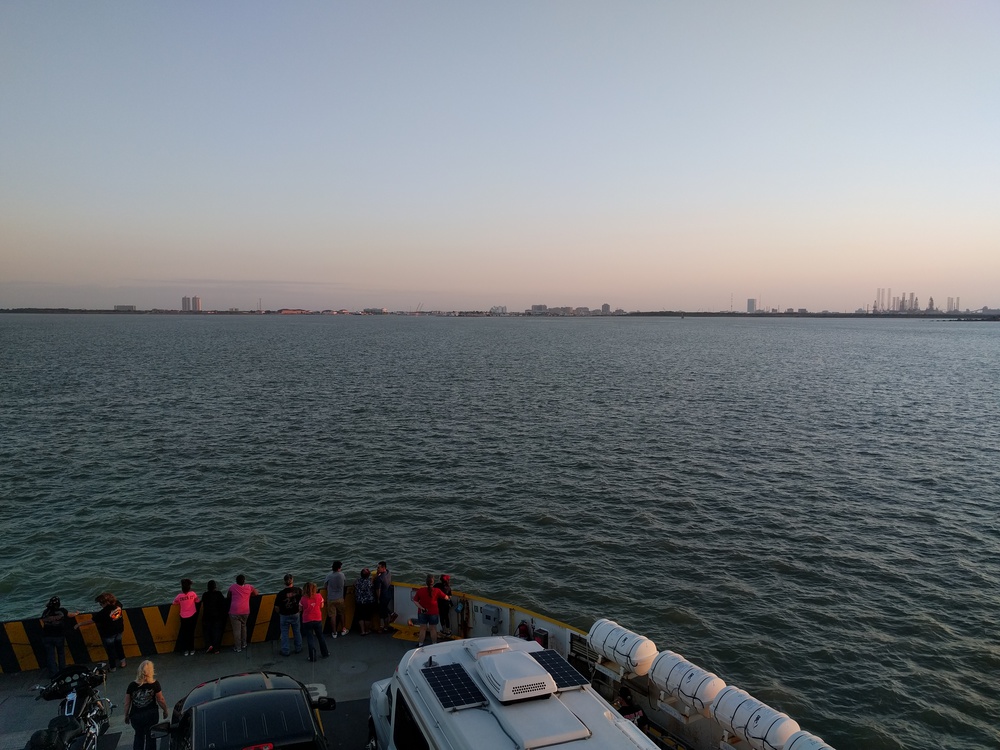 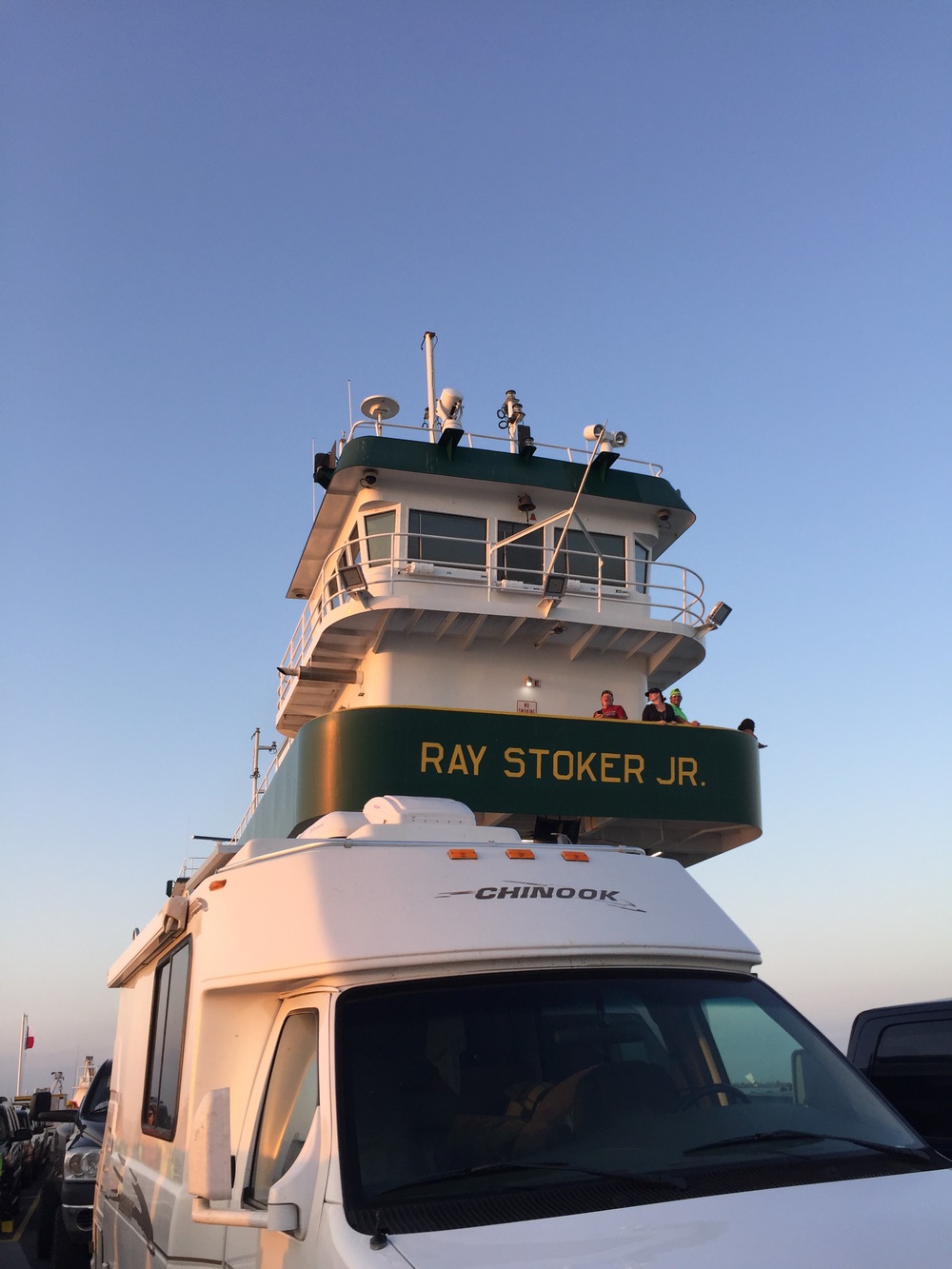 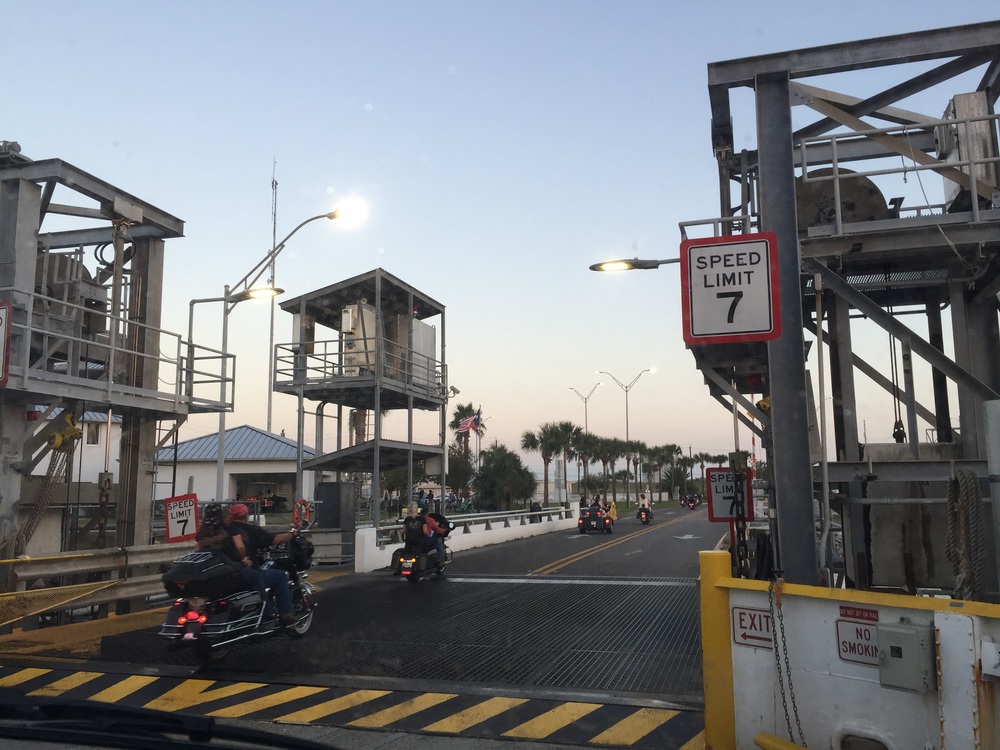 Sunset from the Marina Bar and Grill: 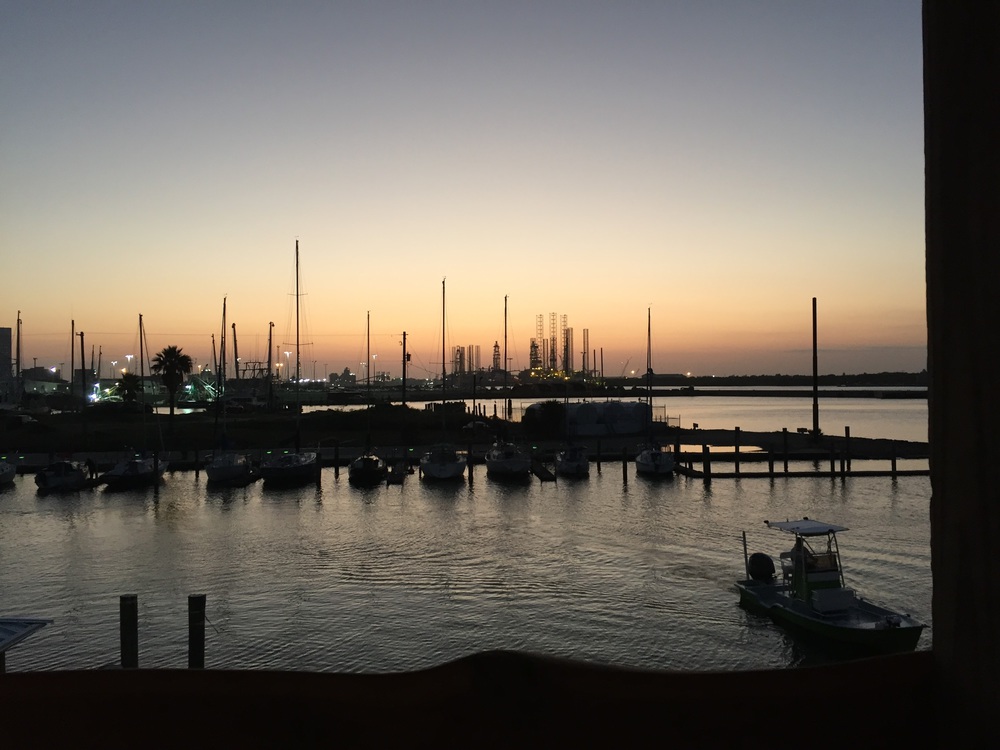 We avoided stopping in the city but we did drive through, and it was indeed mayhem. There were thousands of motorcycles, all riding like maniacs and just generally appearing to be having a really good party weekend. Not quite what we were looking for.

Despite it already being dark when we reached Galveston, we kept driving south and west to get out of the craziness, and we ended up on strip of sandy beach that is owned by the County and maintained as a park. Only trash cans are provided, but the sand is hard-packed and easy to drive on, and overnight camping is allowed for up to 14 nights in a row. Can't pass up a deal like that. We parked the van up near the dunes away from the water, and spent the last couple hours of the evening fretting over the tides, since the water still looked pretty close. 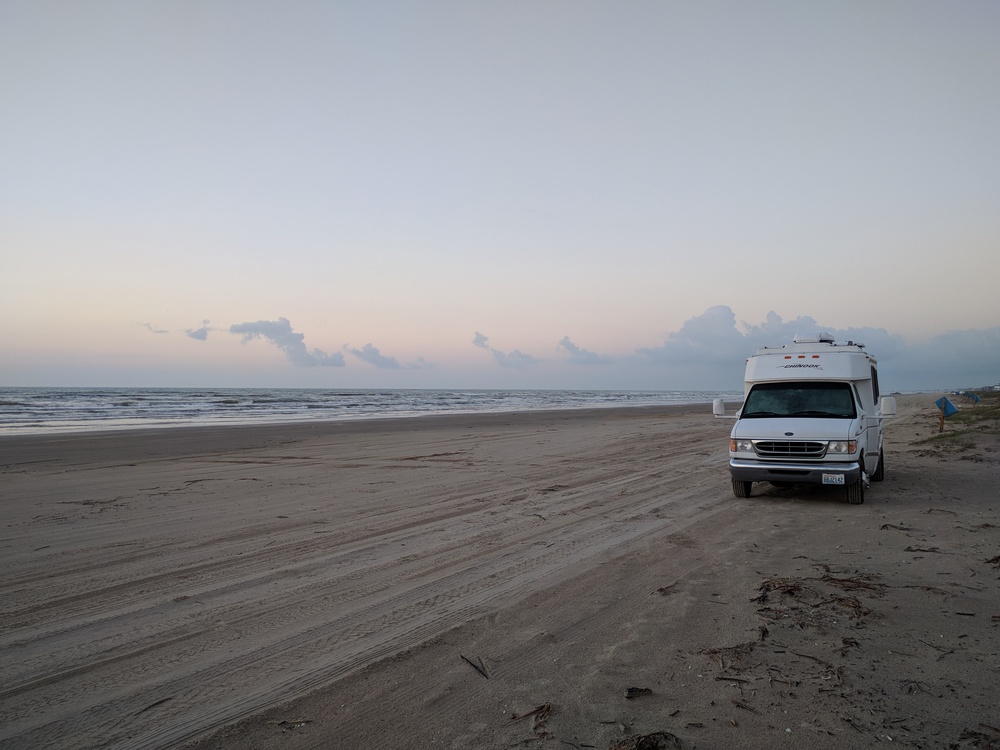 After consulting some tide charts online and talking to some of the locals I was fairly convinced that we'd be safe for the night, but not so convinced that I was willing to cancel my 3 a.m. alarm clock to check out the overnight high tide with my own eyes... It was fine, the water barely moved. We continued the theme of a patchy night's sleep by getting up just before sunrise so we could watch it come up over the water. Still being so far south and being right on the Gulf waters, I could walk on the beach at sunrise shoeless and shirtless in comfort, in November. Pretty nice, but this is the positive side of hot sticky weather - the negatives being stifling hot nights sleeping in sticky, humid air, and the abundant mosquitos. 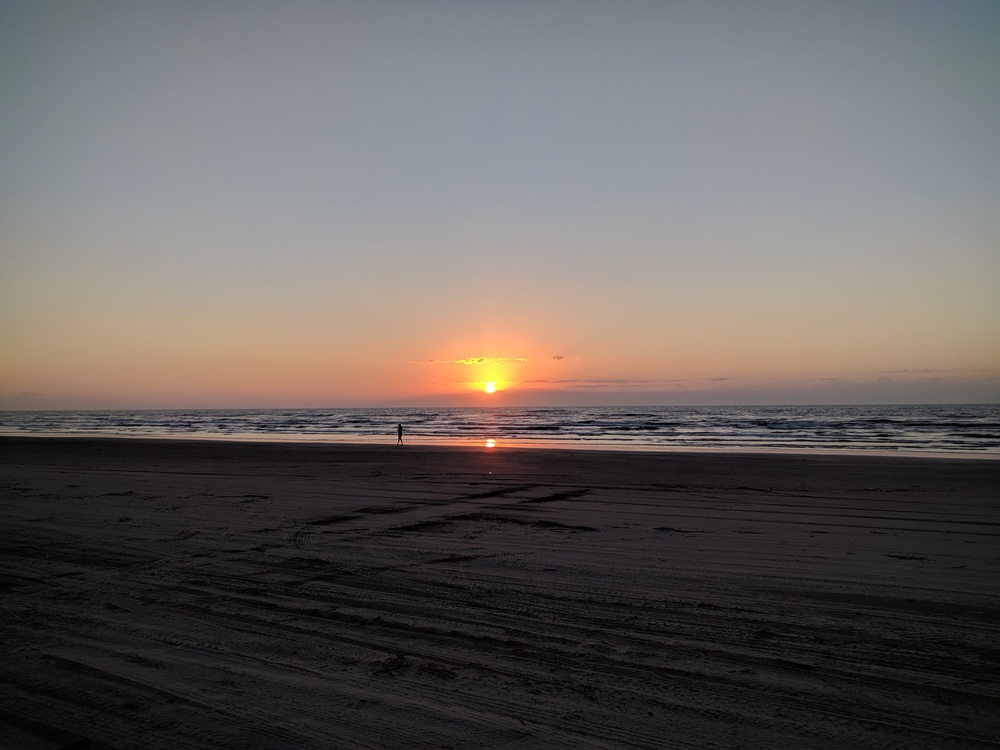 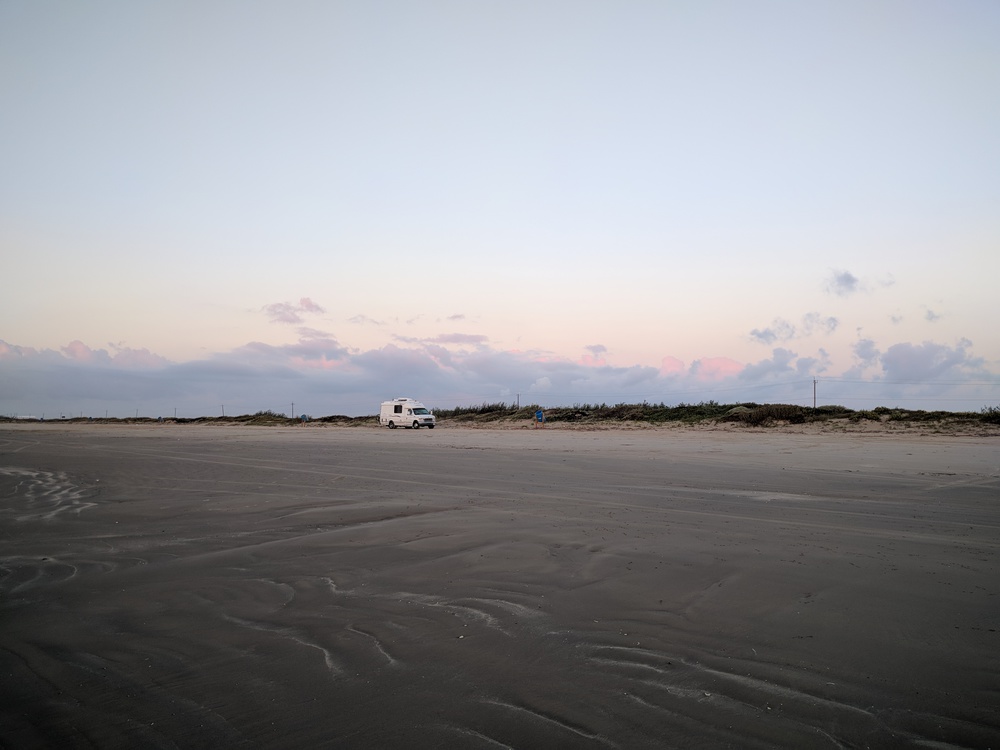 As the sun rose higher in the sky, the beach started coming to life with activity. We sat drinking coffee and watching vehicles drive down the beach, and started to notice that many of them had the same type of strange circular contraption strapped to the back. We debated for a while about what they could be: I thought maybe some kind of shallow-water pot for catching shellfish or some other sea creatures; Rosie said she was sure she saw a seat in the middle of some of them, but couldn't say why. Once they got these things assembled and started flying around the beach we could see that she was right about the seat. 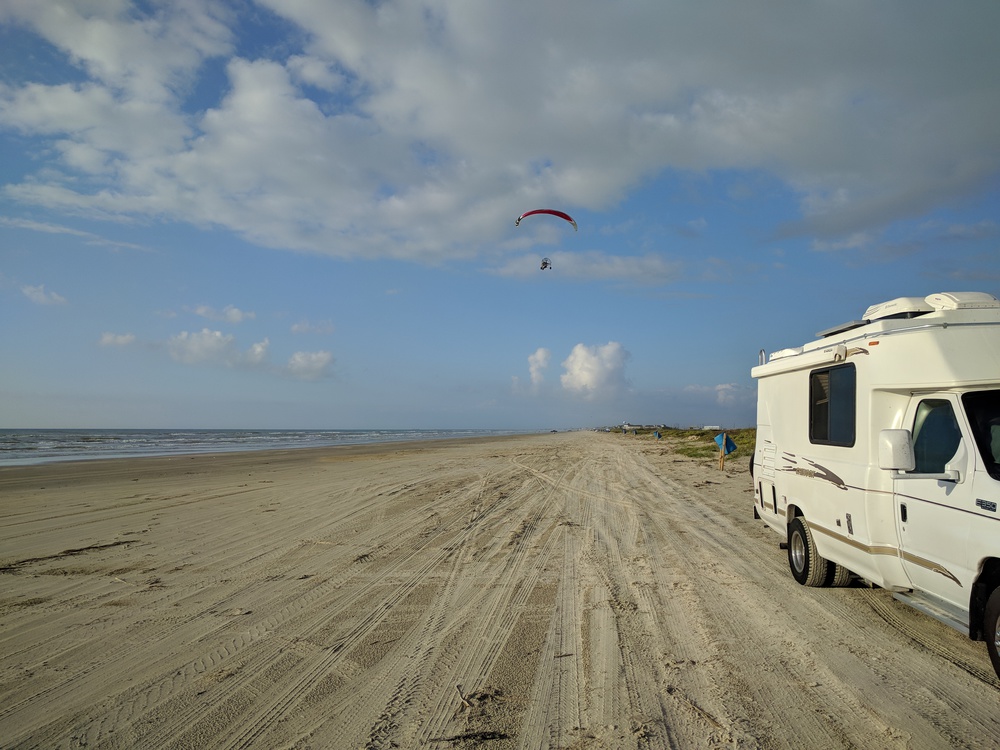 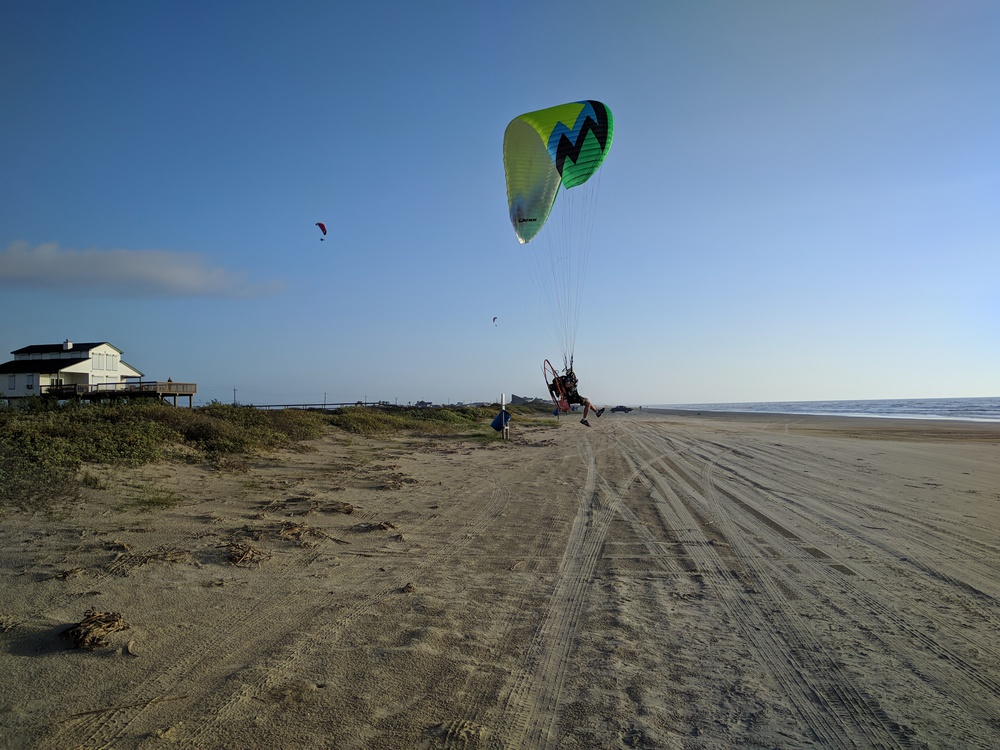 They're called powered paragliders, and they look like a lot of fun to fly. They were fun to watch too and seemed to like the attention, one of them came in for a close fly-by in front of the camera:

They were probably after the still morning air, and once the day started to heat up they started to thin out. The tide was supposed to come up much higher in the afternoon, so we packed up and got off the beach too.

We learned our lesson after taking a few ferries on the Outer Banks that if we don't give the van and the bicycles a really good rinse immediately after they get sprayed with salt water, they will rust very quickly. We found a self-serve carwash nearby that was tall enough to accomodate the van and sprayed everything down, then filled up on gas and started up towards Austin.

Next:  Austin and Texas Hill Country