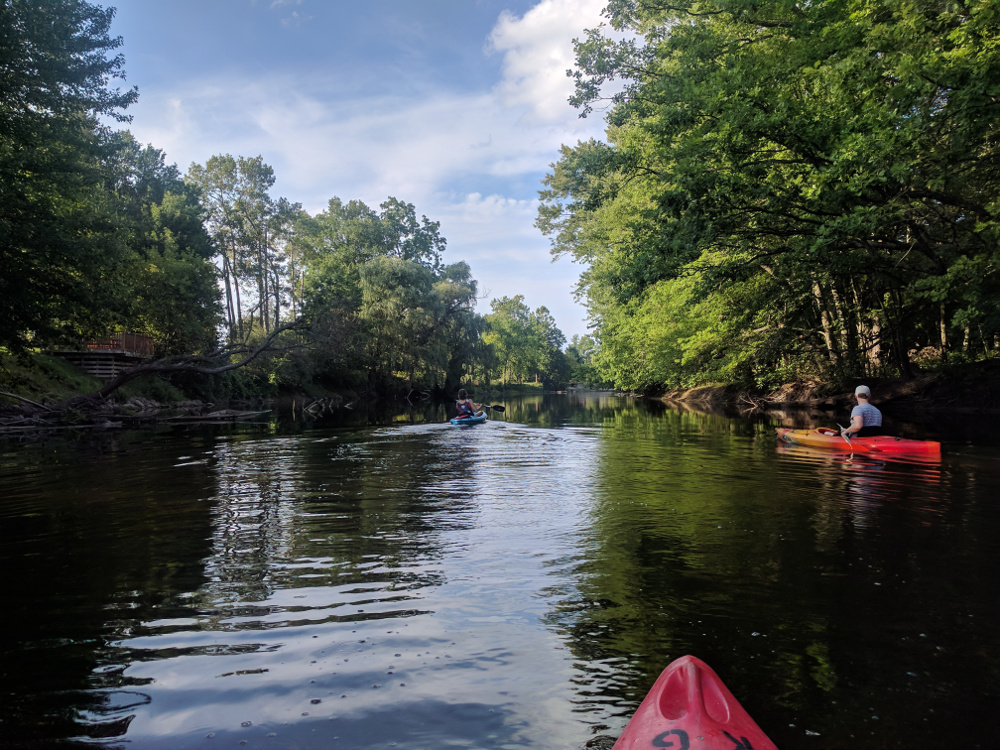 From Warren Dunes, we headed southeast to Edwardsburg, MI on the way to Lansing to an RV repair shop to look into getting new blinds, as the blinds on the passenger side broke the day we got into Madison. The estimate was more than we wanted to spend ($600) so we left. That day we also stopped in Elkhart, IN to poke around and maybe get lunch. We were on the hunt for the “Tooth Brick,” a local “attraction” which consisted of a cement block inlaid with hundreds of human teeth that a local dentist had made to memorialize his deceased German Shepherd. The info online was conflicting and we had trouble finding it, meandering around Elkhart (which was quiet and kind of empty) along the river and through town, eventually going to lunch at a brewery. 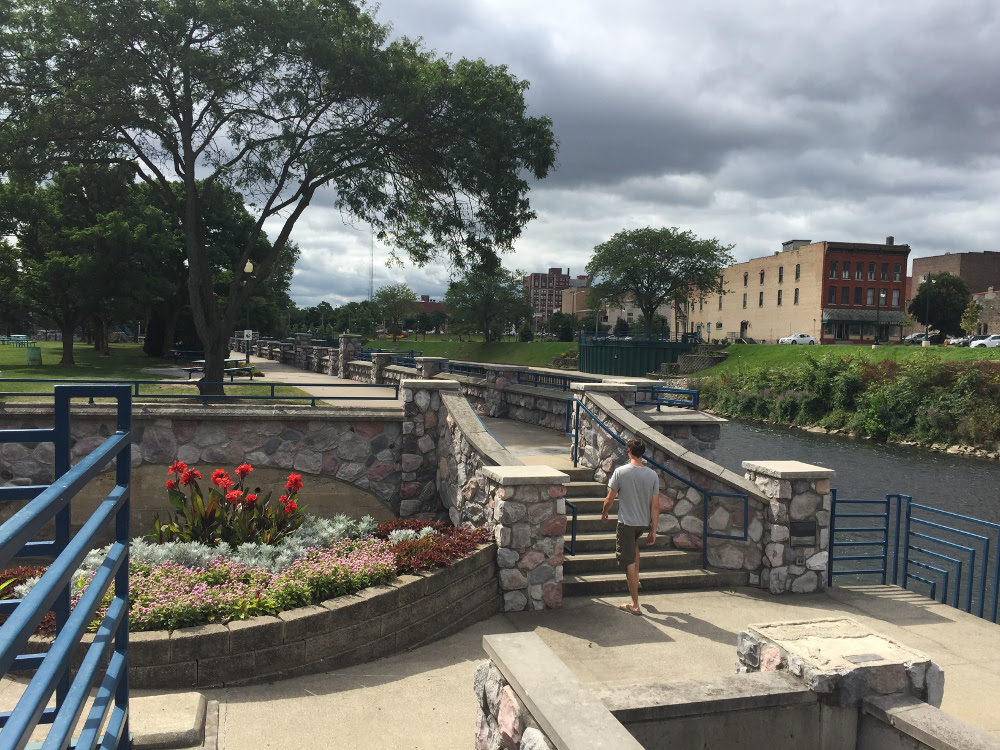 For once we didn't have the beer, just really good pizza. When we finally got back to the van we realized we had been parked in front of a closed museum which held the fabled Tooth Brick behind a fence. I kind of saw it through the fence. Unfortunately we missed the huge RV Museum in Elkhart, being distracted by the Tooth Brick. Dang.

We arrived in Lansing at our good friend Nate's house around 5pm: 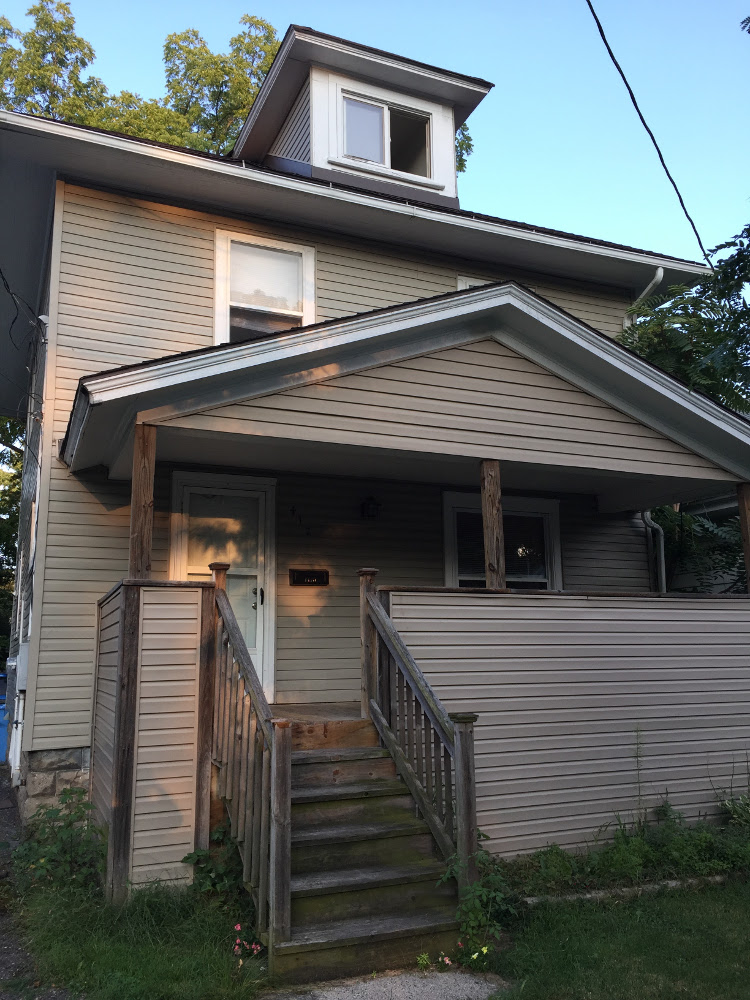 He had tacos and beer for us. We hung around his place for the early part of the evening, playing some music and then going up the street to the Avenue Cafe, a local bar with pinball and a few people working the dance floor. 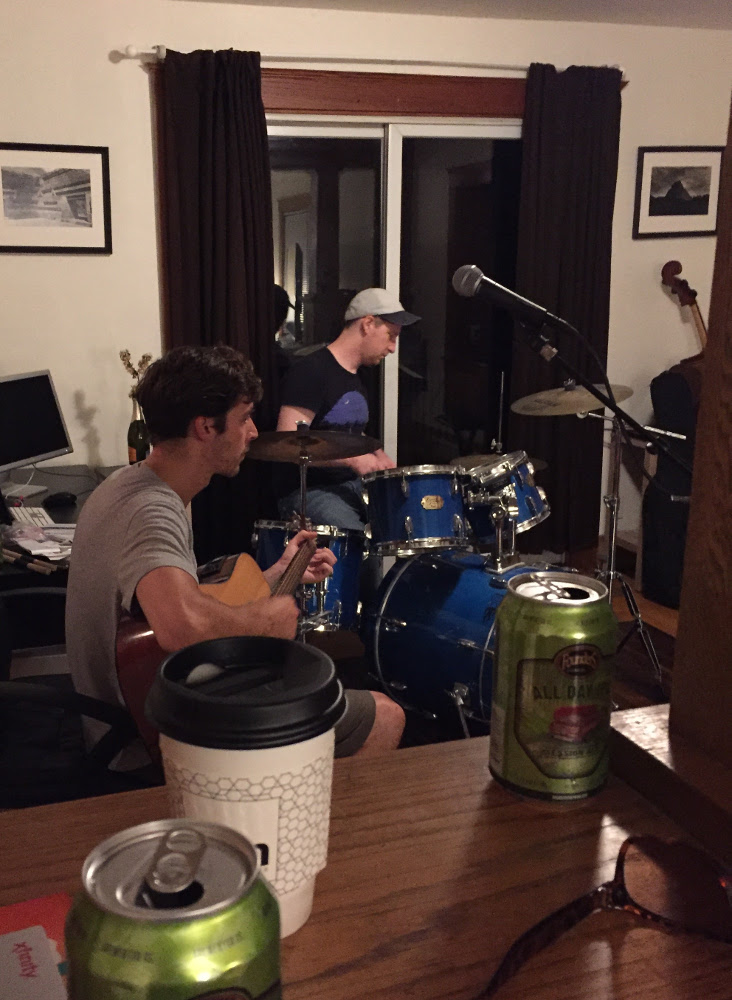 Pinball and dancing (sort of) at Avenue Cafe: 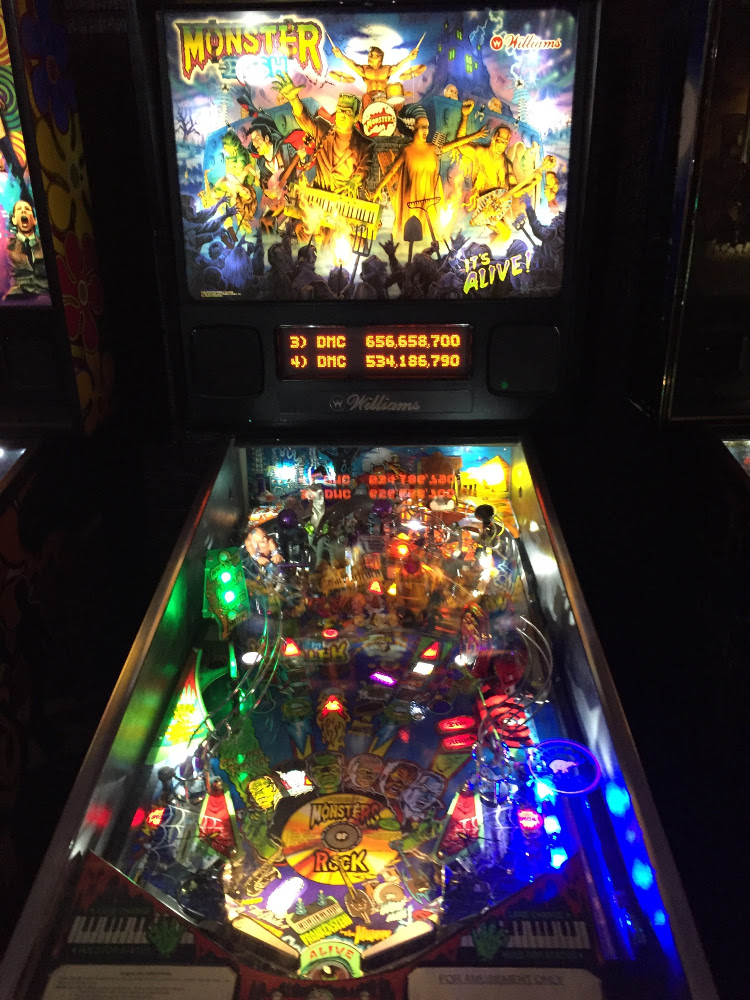 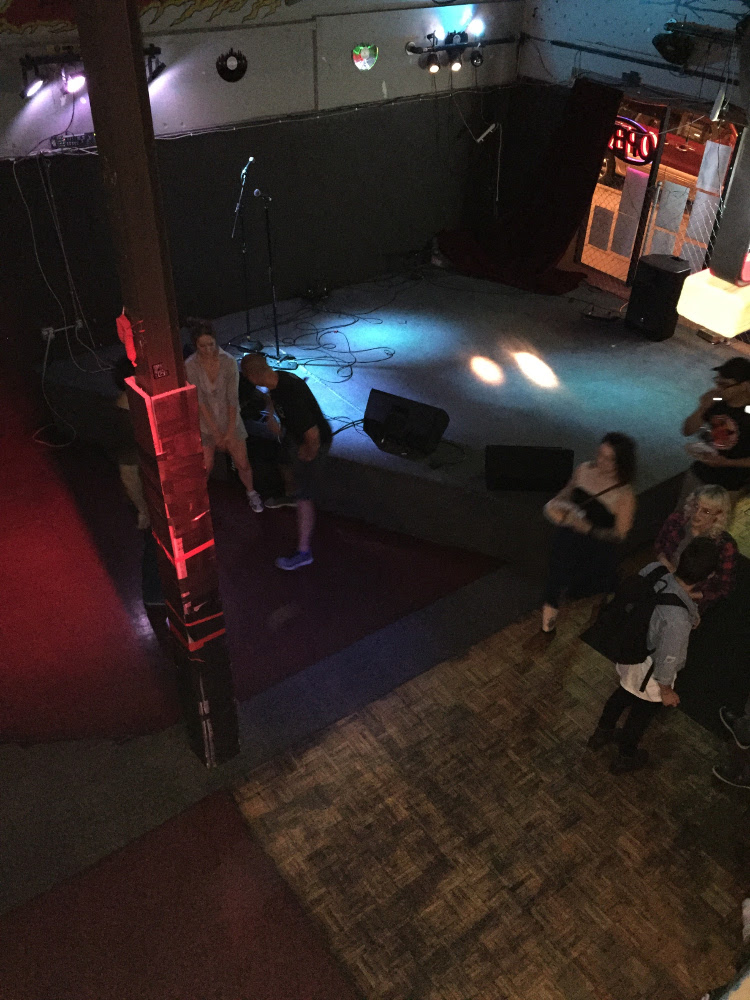 It was a cozy neighborhood spot. We had late night Chinese food next door on the way home, initiating a pattern of staying up past 2am in Lansing.

The next day we lazed around in the morning drinking coffee and eating Nate's specialty scramble. His house is very comfortable and a large 3 story place (four counting the basement). Pending the arrival of his fiance as soon as she graduates from a PhD program at WSU, the house is minimally furnished but features a classic bachelor style spread: flat screen tv, ping pong table, instruments and music equipment, and a bed. 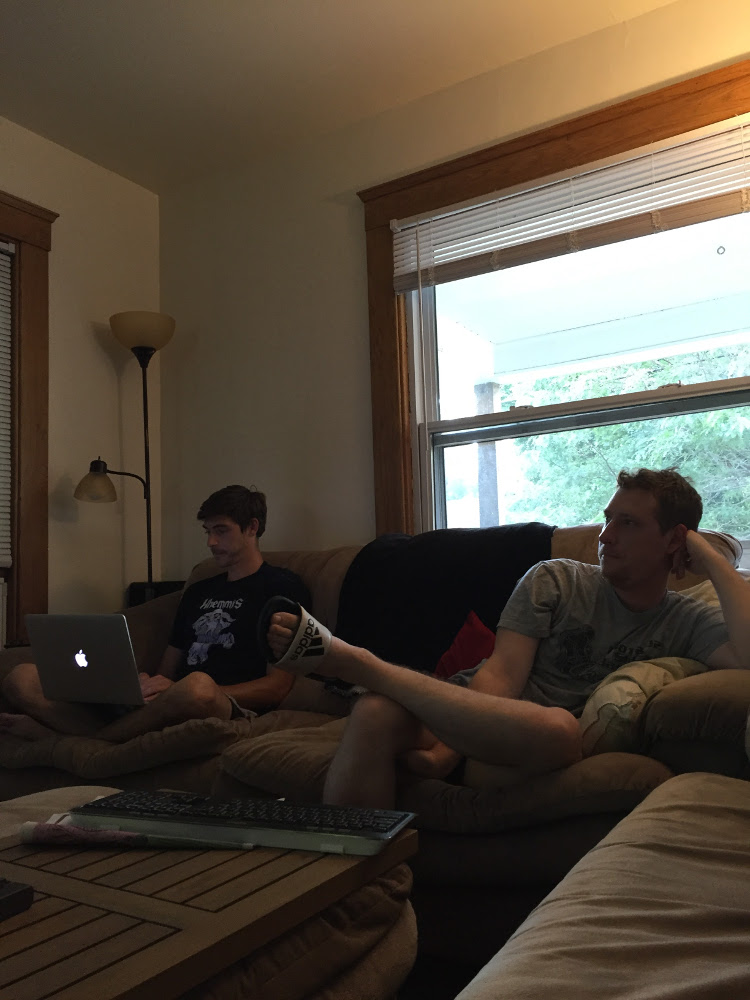 We warned him early on we might be there for a while, especially since he gave us his bed and slept on the couch. Later that day we went on a bike ride along the river path to Michigan State University, had lunch at HopCat and went into a used bookstore. That evening Dan and Nate had a rousing game of ping pong and I watched TV in comfort near the A/C, since it was still pretty warm and muggy and I felt kind of gross (I blame the potent mixture of beer and Chinese food).

On Sunday we spent a large chunk of the day kayaking down the Grand River outside of Lansing. For $23 apiece we were shuttled a few miles upstream and given a kayak to put in the water and paddle back to the park. 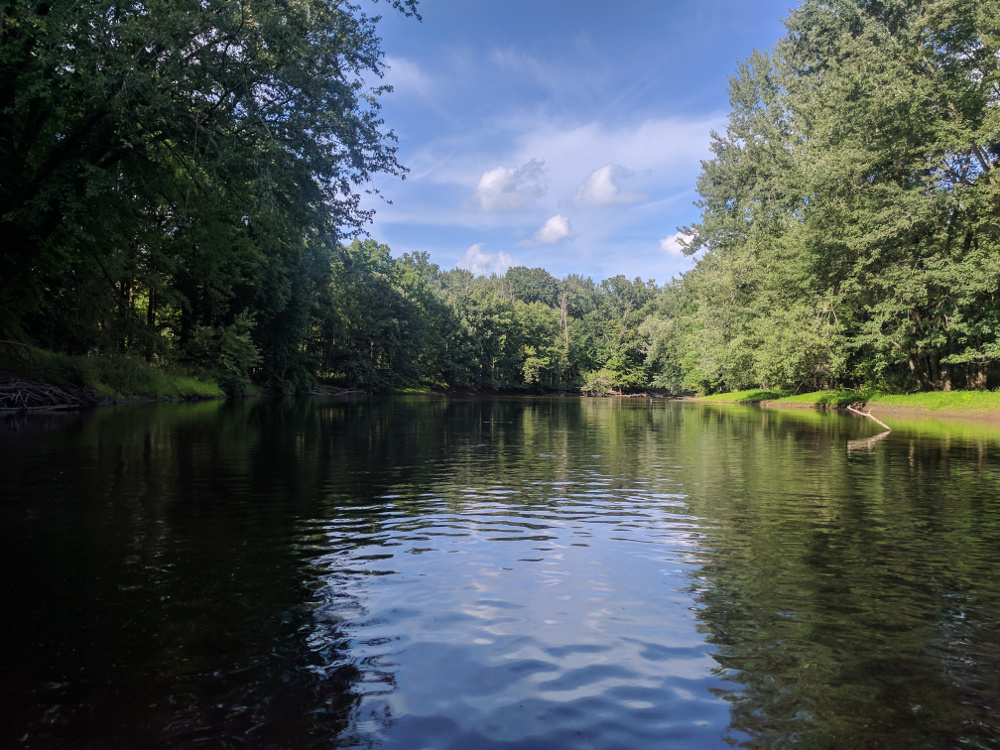 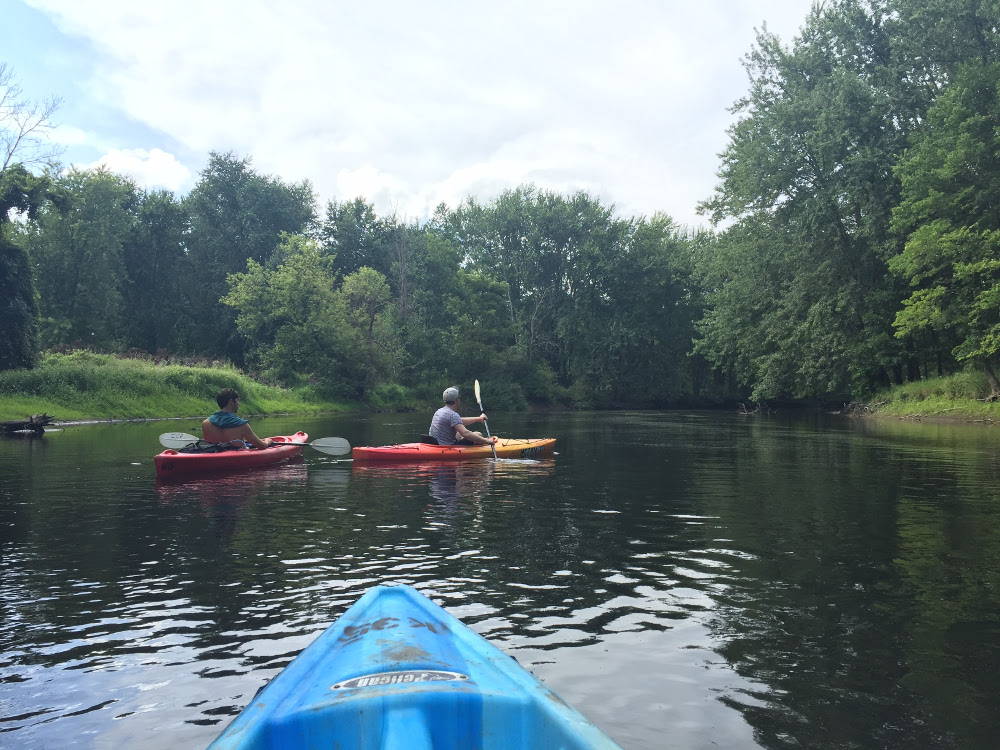 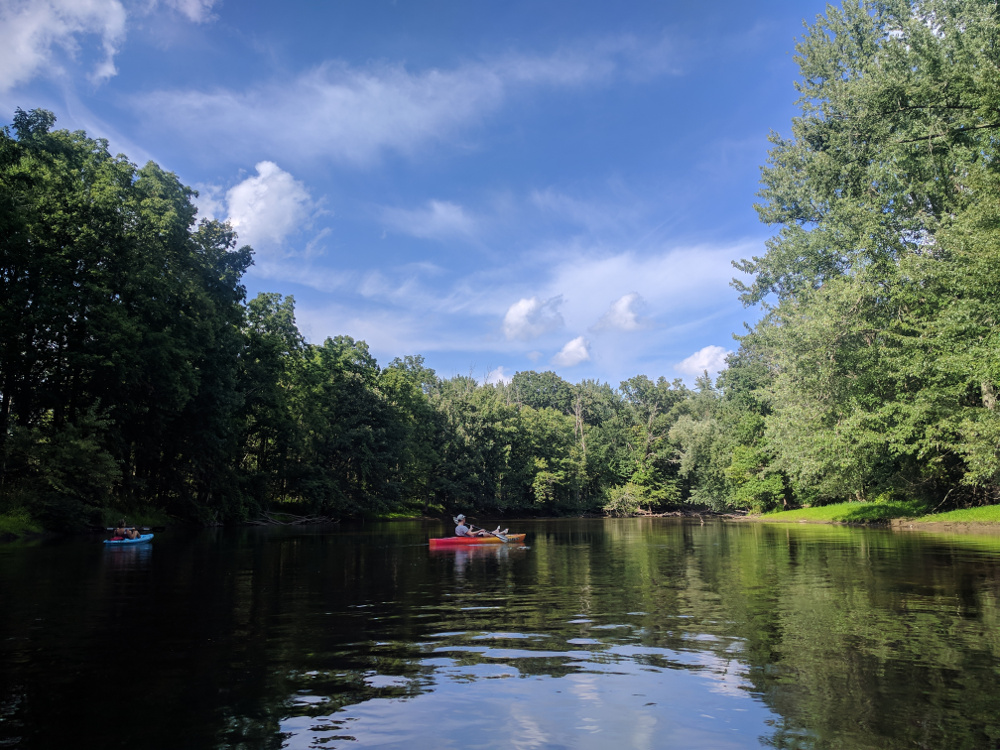 It was very peaceful and pretty (when we got away from a loud group) and we saw a lot of turtles perched up on logs sunning themsevles. It was a pretty perfect Sunday afternoon, four hours on the river, and we returned the kayaks just a few minutes past the required time of 7pm. That night we grilled burgers.

Monday was a memorable day because of the eclipse. Although we were out of the path of totality, we still could watch it with the help of the eclipse glasses. I thought the best part were the shadows. 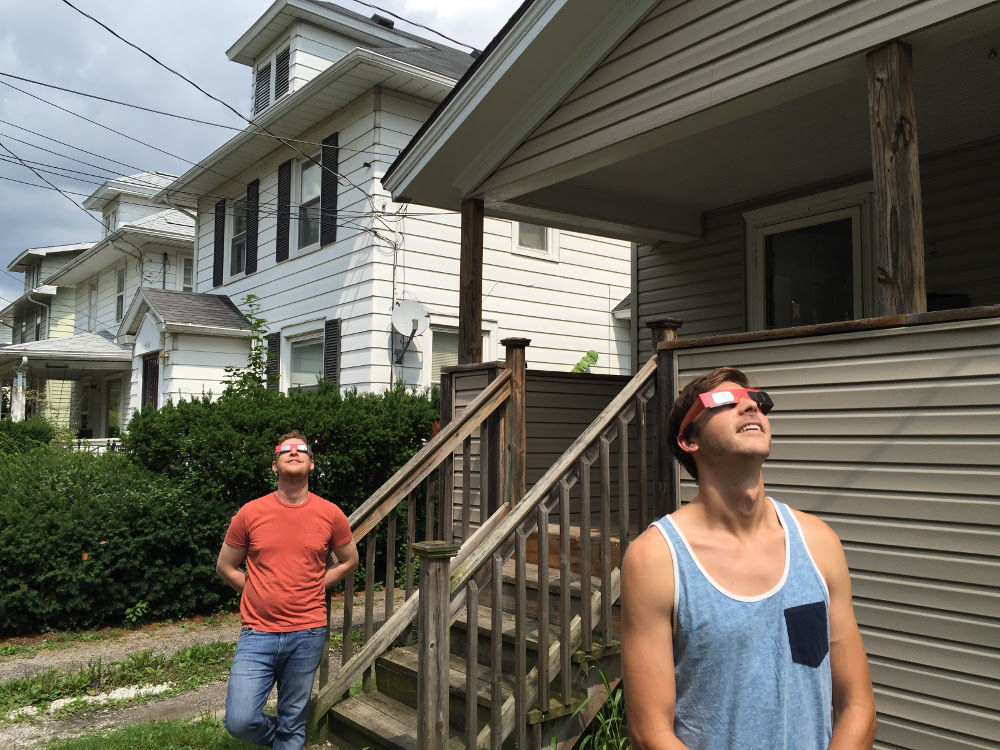 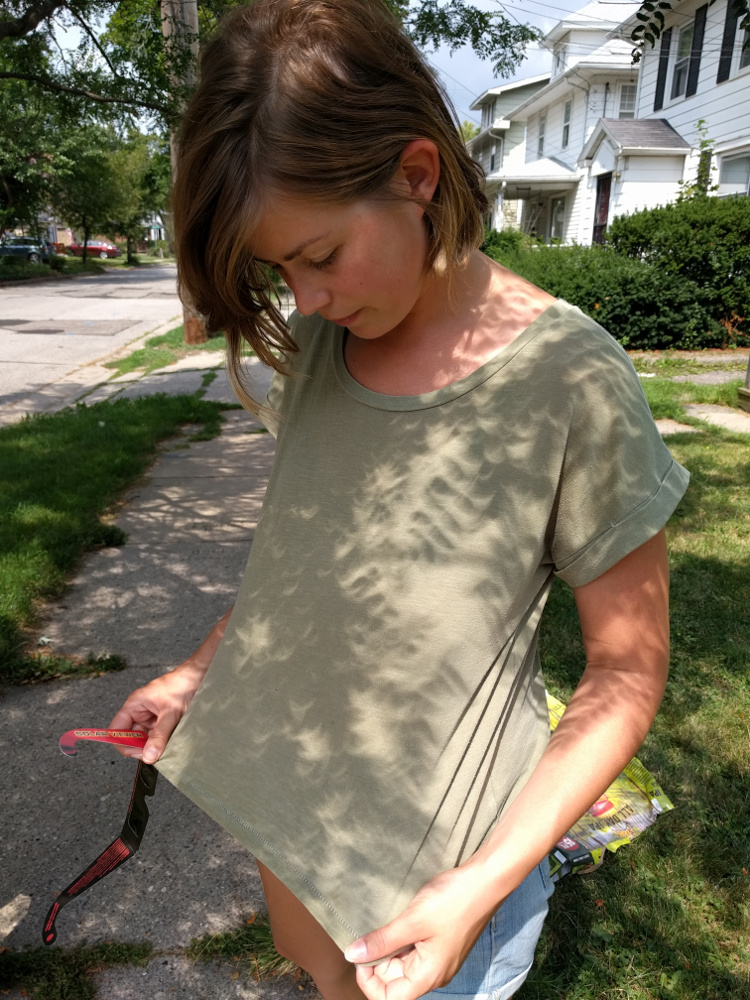 The rest of the week (we stayed in Lansing through Saturday) blurred together somewhat. While Nate was at work, Dan and I mainly enjoyed the space and comfort of his house. We spent some time researching where to go next, cooking food, playing ping pong, doing some yoga and fiddling with instruments. I made some progress on a comic I'm working on and Dan did some work on a blog he's setting up. 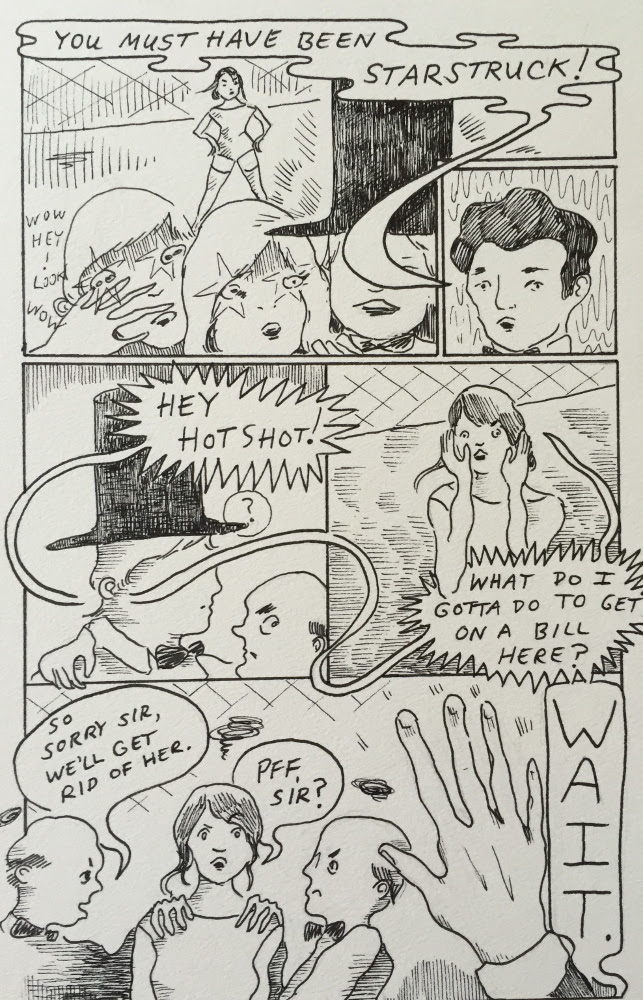 On Tuesday I made banana bread and we watched the Trump rally. No comment there! On Wednesday Dan and I took separate bike trips back down into the Michigan State University area, him to utilize the library and I to explore the outdoor gardens, mainly. 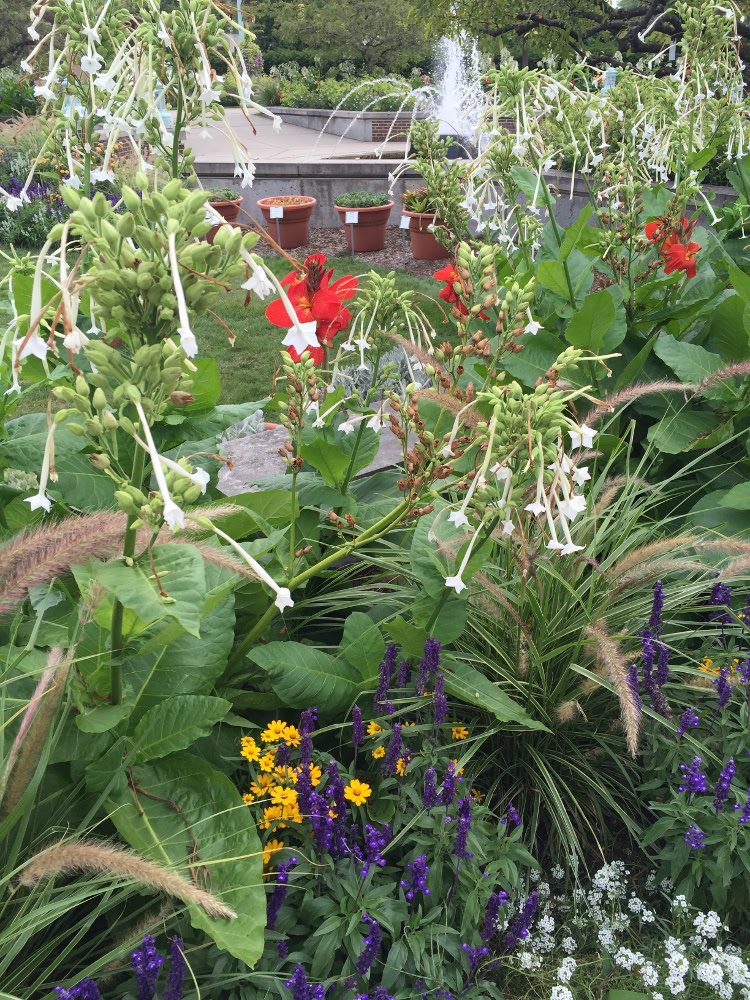 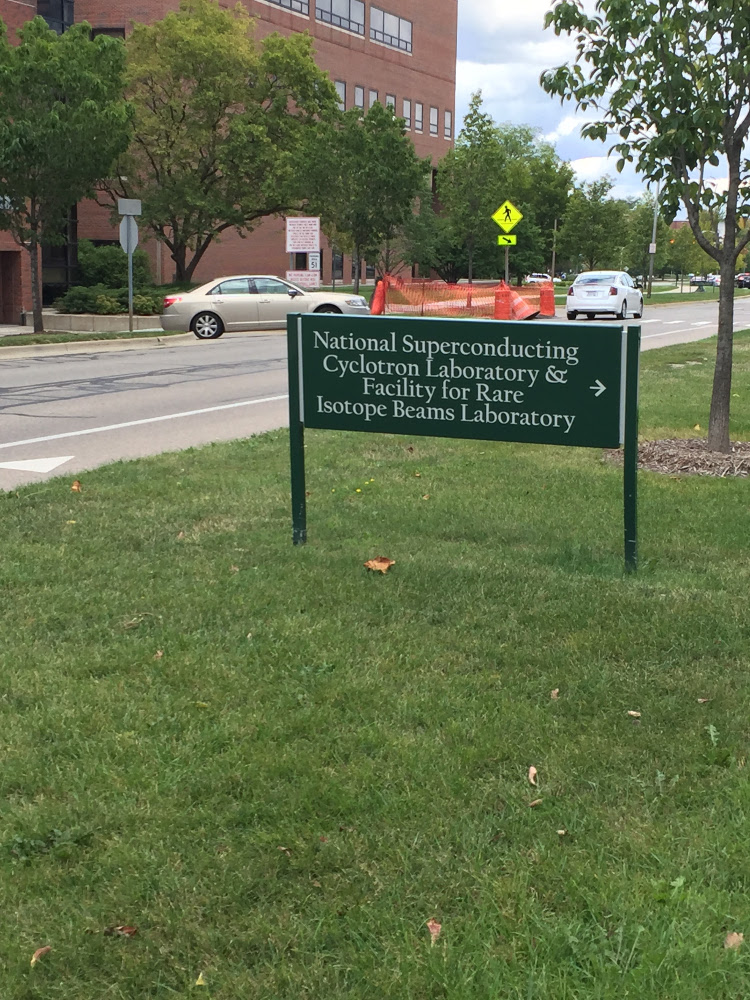 At one point we accidentally ran into each other which was funny. That night we met up with Nate (he works at the university) for dinner at a Mexican restaurant and then went back to the house to play more music together and drink beers. On Thursday I honestly am not sure what I did, besides work on the comic and try to plan for my upcoming artist's residency.

On Thursday evening we went back down to the nearby Avenue Cafe for dinner, they have the best ramen I've ever had (vegetarian miso with greens, mushrooms, pickled bamboo shoots, seaweed etc.)
Friday was mainly spent biking around a different part of town – Dan and I made an excursion to a comic and game store to get Settler's of Catan and then had sub sandwiches. 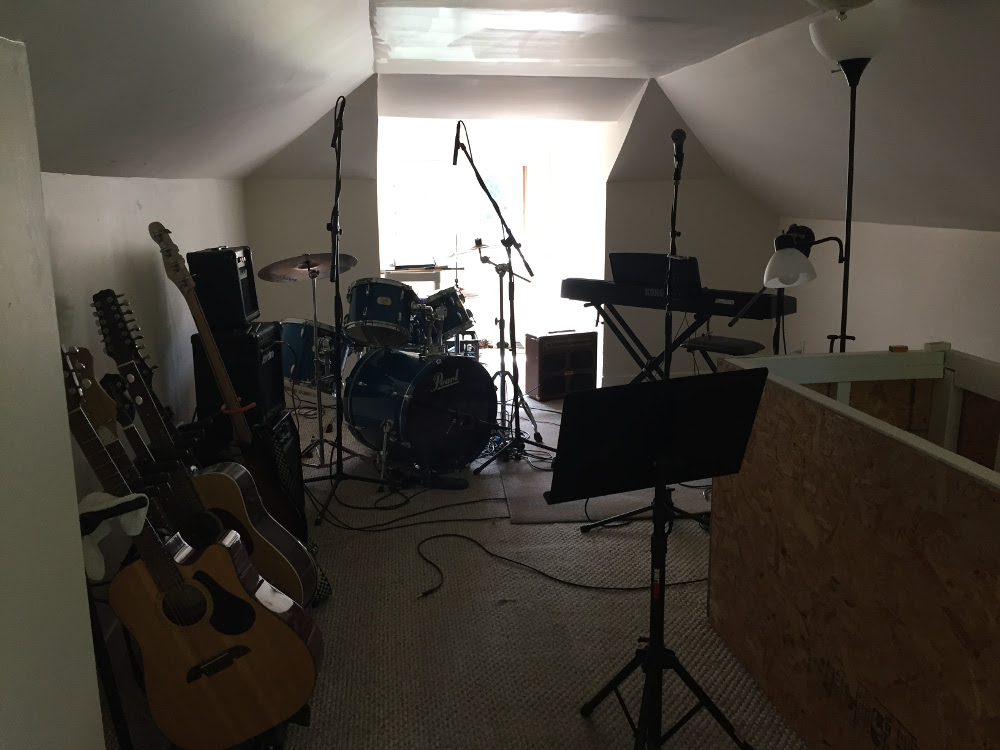 As I said, the days sort of blended together. I did notice the weather was starting to get cooler. On Friday Nate's parents were flying in from Spokane so after getting off work he went to pick them up at the airport. They were staying at a condo about an hour and a half north of Lansing, so after a brief visit back at his house he shuttled them off to the condo. Dan and I had the house to ourselves that night; Dan made chicken and we played Catan and watched Harry Nilsson performance videos on Youtube and the new Death Note revival on Netflix, enjoying the final hours of household luxury and easily obtainable entertainment.

It took us a while to figure out how Nilsson made this video in 1971. He had to perform and film three separate times to layer each vocal/video part. Hence why the audience is gone/asleep at the end as a nod to the tedious process.

On Saturday we prepared for our departure from Lansing. Nate and his family offered us a stay in their condo so after getting our stuff together and doing some laundry at the laundromat, we started north to the St. Ives Inn, about an hour and a half north of Lansing.

Here it is (found this picture online):

When it comes to the generosity of our family and friends, and in this case the family of our friends as well, I will continue to be grateful. The condo was very nice (great shower) and had an indoor pool. Nate's parents cooked us a tasty dinner, complete with gelato dessert. Afterwards we drank beer at the pool, followed by a campfire outdoors with some fine folks from New Jersey. What a day. Sometimes I really wonder what I did to deserve such good things in life.

On Sunday we debated whether to stay another night, but ultimately taking advantage of the kindness and hospitality of others can get you feeling like a lazy degenerate (as much as we'd have liked to keep hanging out with Nate and his parents). So we left towards Traverse City, MI on the way to the Upper Peninsula!

Next:  The Upper Peninsula