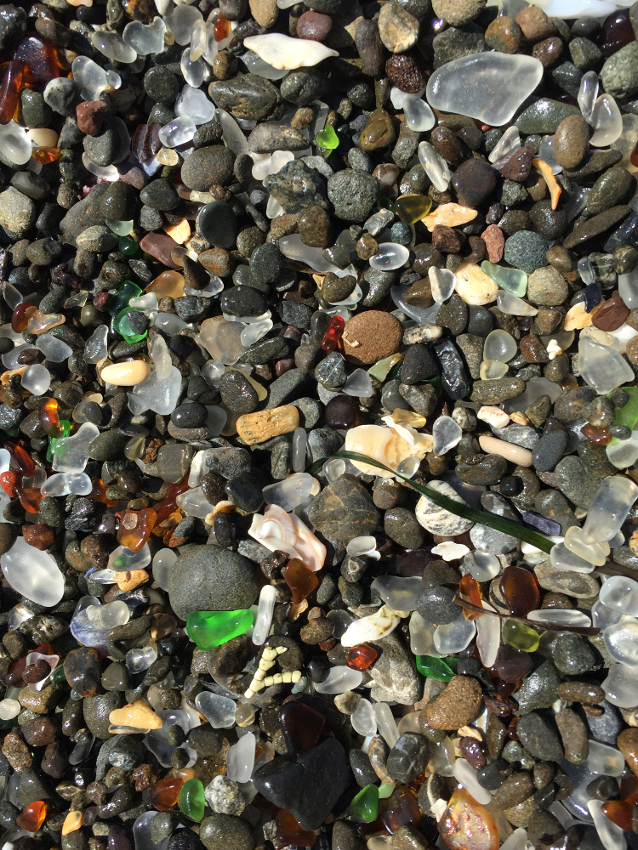 Woof, there is a lot to catch up on. It has been difficult to be good about writing on here for a few reasons - spotty or no wifi, never wanting to be on the computer, and packing too much into a day so by the time I am back in the van it is 930pm and we haven't eaten dinner.

Where I left off last was our free camping along the CA coast south of Eureka. Shortly after waking up, we hit the road, back on Highway 1, which is beautiful. Near Fort Bragg we stopped at Glass Beach, a popular place for tourists it seemed. 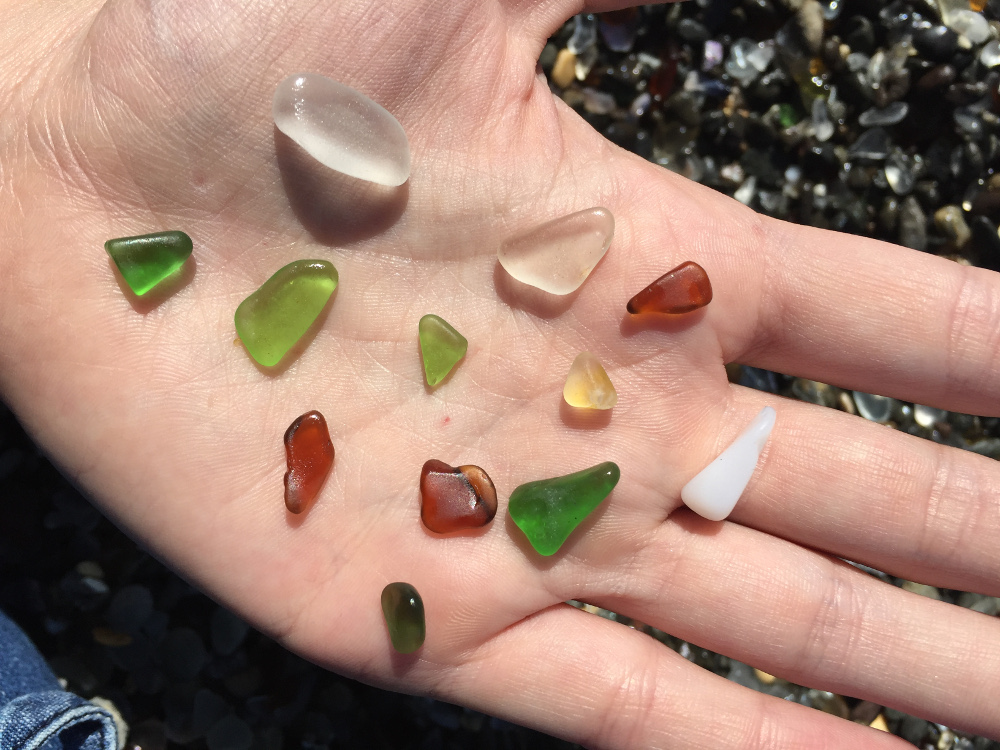 Basically back in the day Fort Bragg dumped their garbage in an area north of town and over the years the glass has washed up, smoothed into sea glass. From what I read online, the sea glass is diminishing, which makes sense. Tourists collect it and they don't dump garbage like they used to. Anyway, it was pretty neat and the most sea glass I've ever seen. 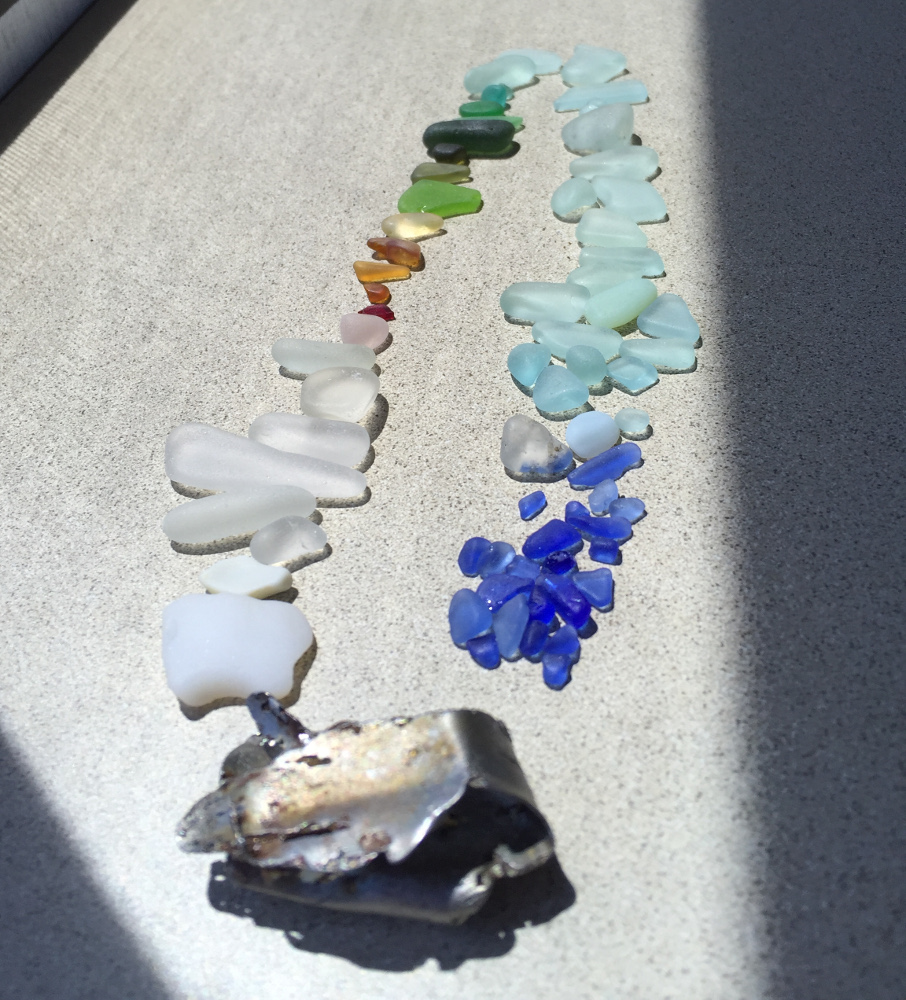 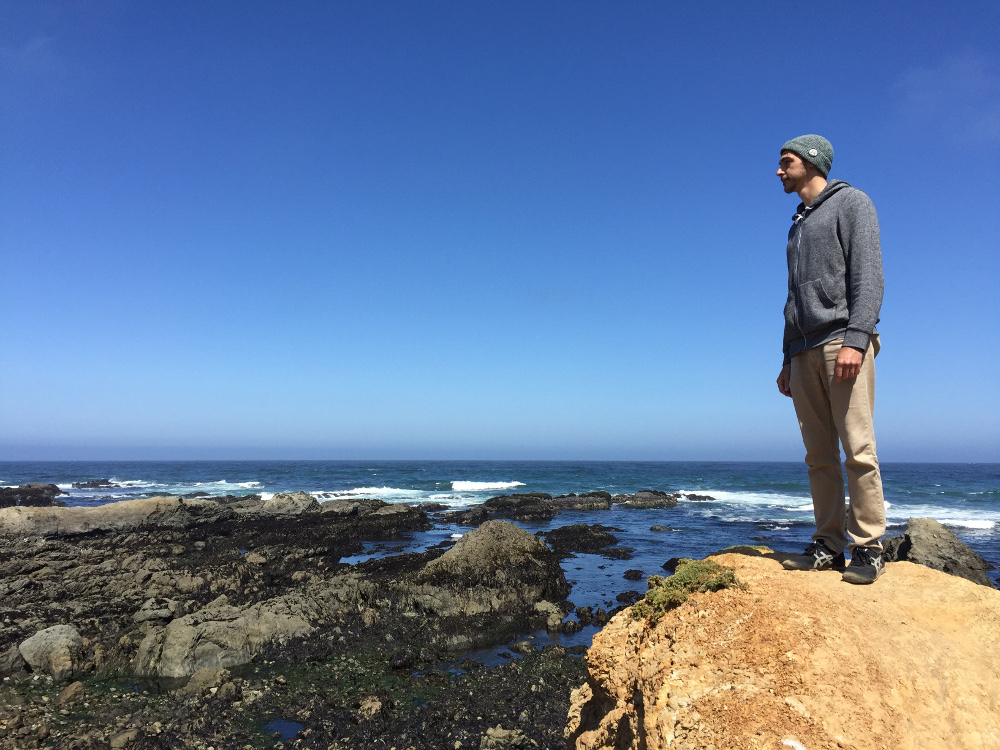 I don't think I've even found sea glass in WA or OR before, outside of a small measly piece or two. Some people on the beach were filling bags, cups and various containers. We took some which I feel guilty about but it was really hard to resist. It was hard not to be greedy. 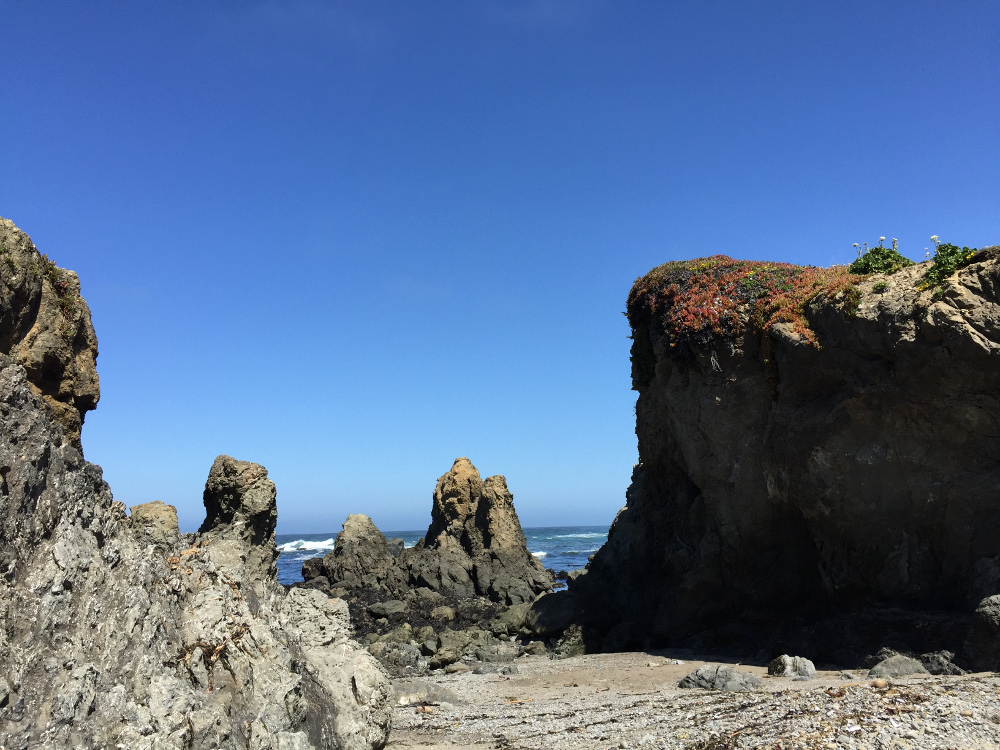 We passed briefly through Mendocino, which seems like a nice place. We had reserved a campground at Van Damme State Park for the night, ended up arriving early-ish in the day. The campground was close to the beach and pretty, kayakers setting out on tours and abalone hunters but overall it was quiet. We hung around, read and watched the sunset. 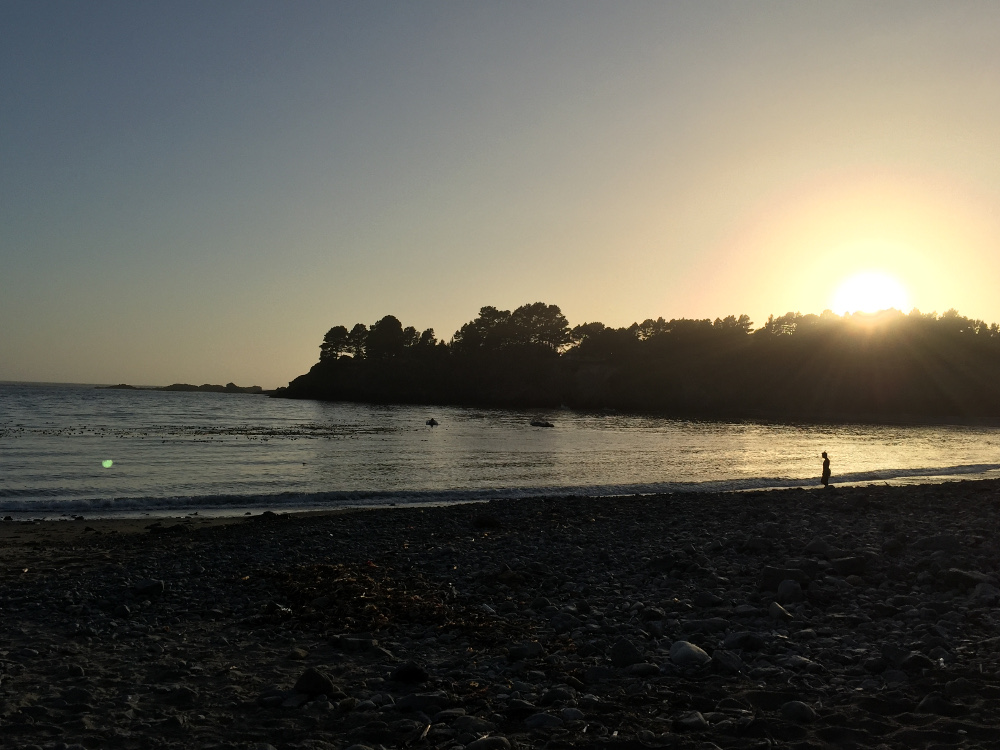 It felt good to be able to spend a little time at a campsite instead of blowing through for 12 hours (8 spent sleeping).

The next morning we made a stop in tiny but interesting Elk for late breakfast and a gallery visit, then continued onto Highway 1, which I was not mentally prepared for. For some reason I expected just a flat beach road but that was far from the case. On this stretch of highway, every 10 feet offers a new invitation to drive off a cliff. I spent the 4 or so hours (en route to Point Reyes) in a tense state, waiting for us to careen headfirst into the ocean. Dan was calm, haha. 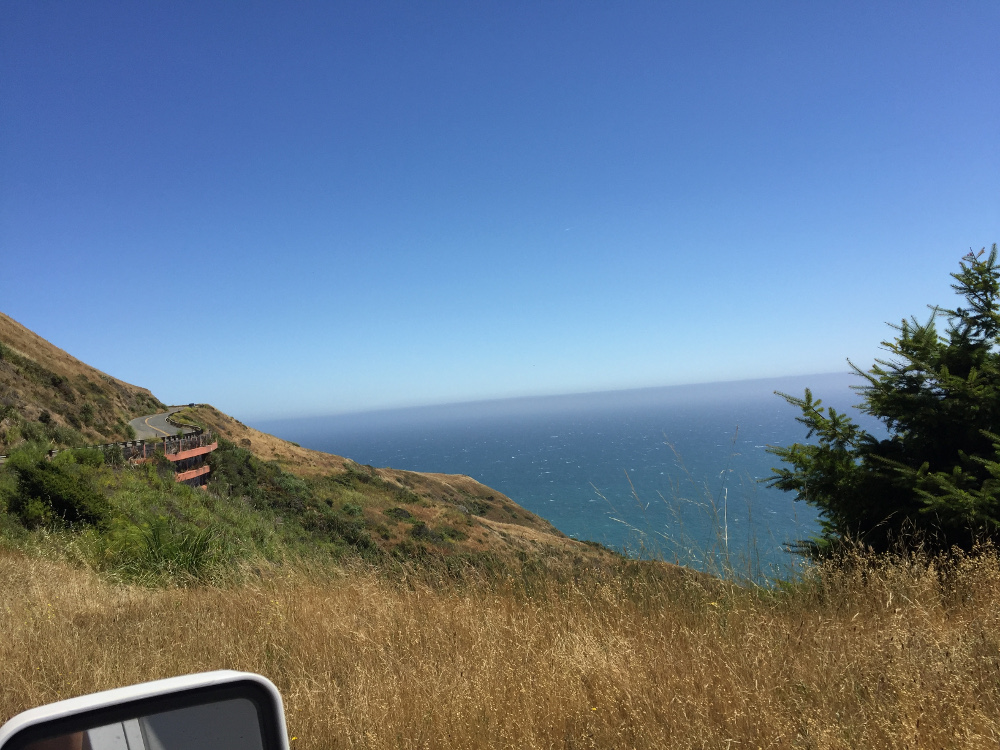 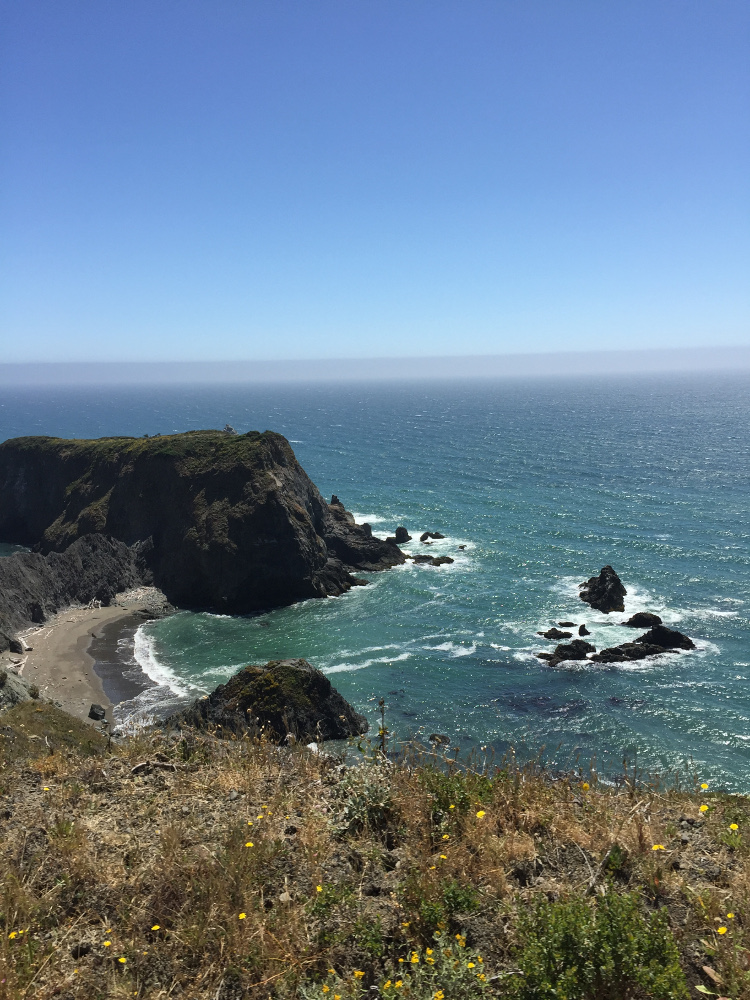 Eventually we made it to our booked campsite in Olema where our friend Owen was waiting on his motorcycle, just beginning a trip up to North Bend. We made a tasty dinner of BBQ chicken, BBQ corn, BBQ vegetables and beer. It was nice to see a familiar face. 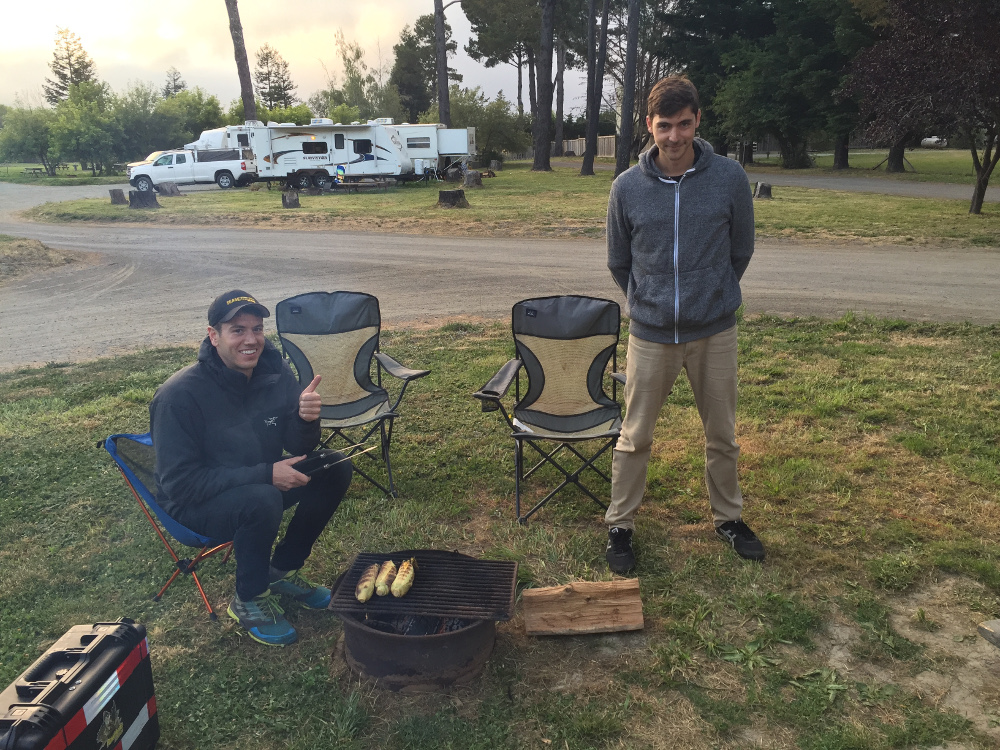 In the morning Dan and I got ready and drove out to a trailhead to hike Tomales Point. The drive out was surprising - being so close to the beach I did not expect rolling hills and cattle. By the time we made it out on the trail the fog was just starting to lift and luckily so because we had some of the best views along the CA coast I had seen. The Tomales Point hike basically takes you out onto a narrow spit of land, 5 miles in and 5 miles back, the Pacific on your left and Tomales Bay to your right. We saw a few herds of wild elk, plenty of birds and cliffs and infinite views of the Pacific. 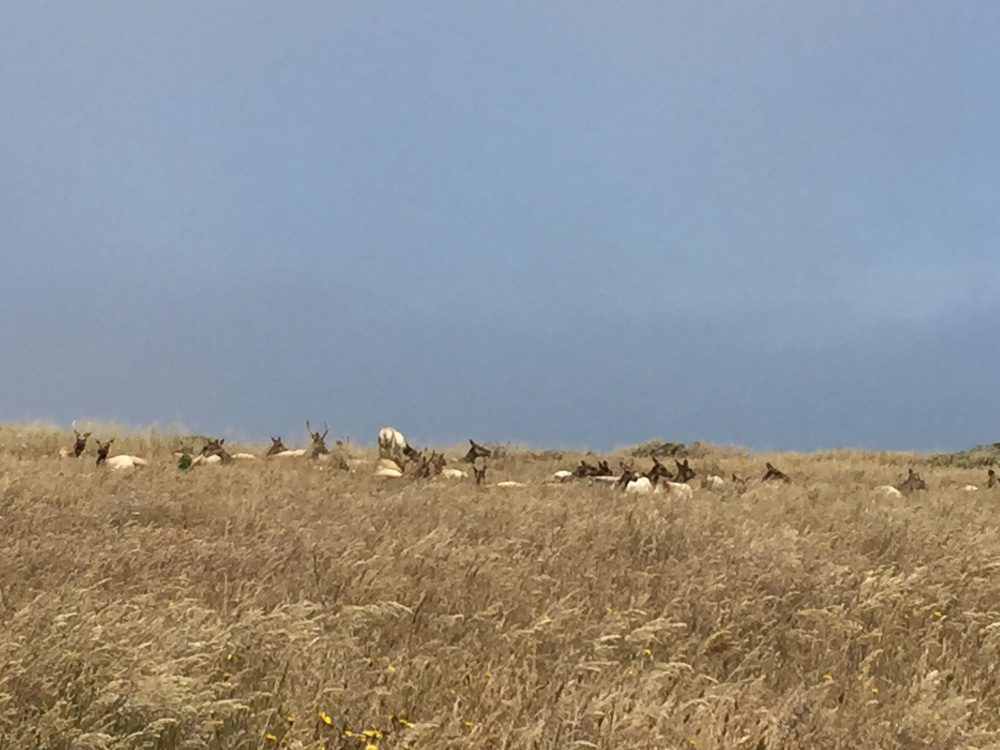 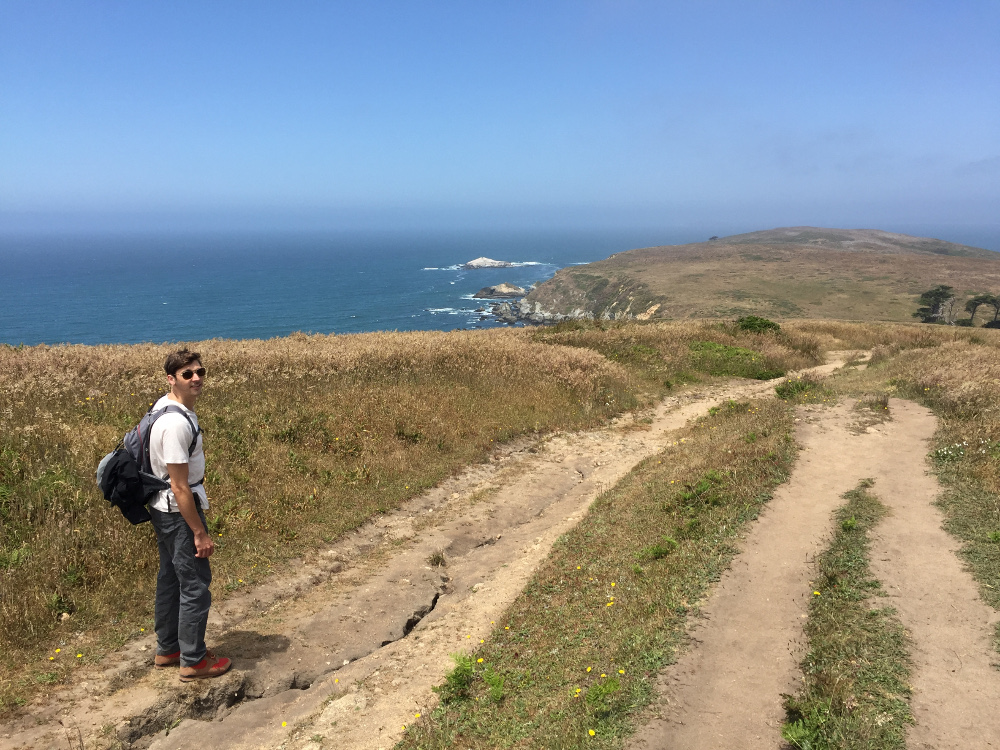 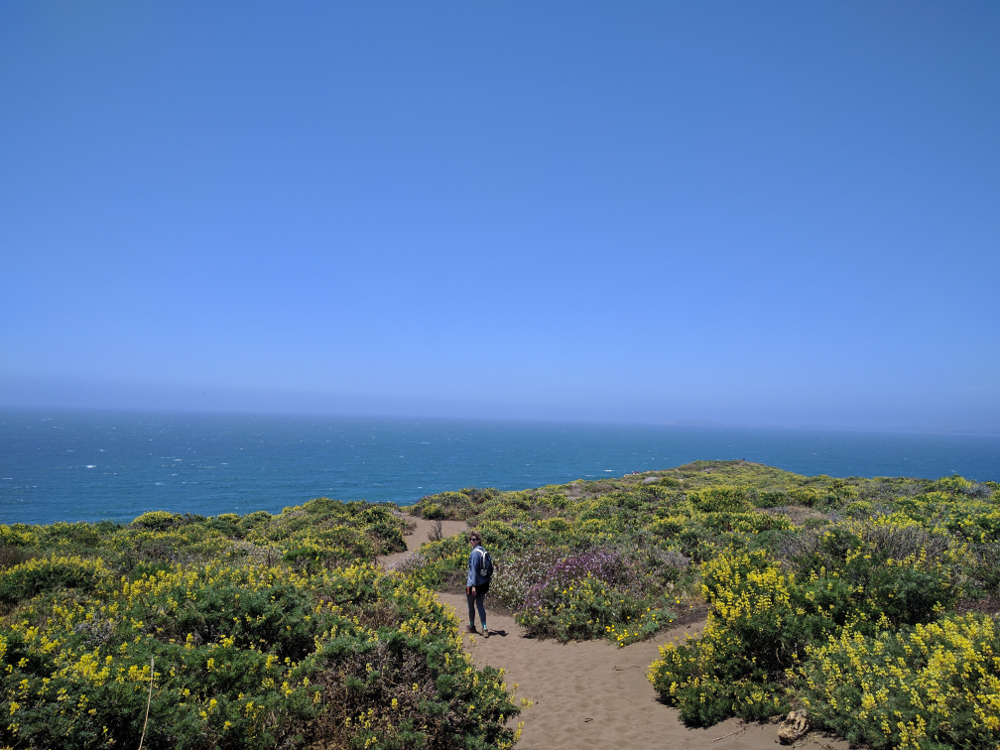 My new-found fear of heights resurfaced when we made it to the point (also there were signs about overhangs collapsing which didn't help) - sheer drop offs, crashing waves and WIND. 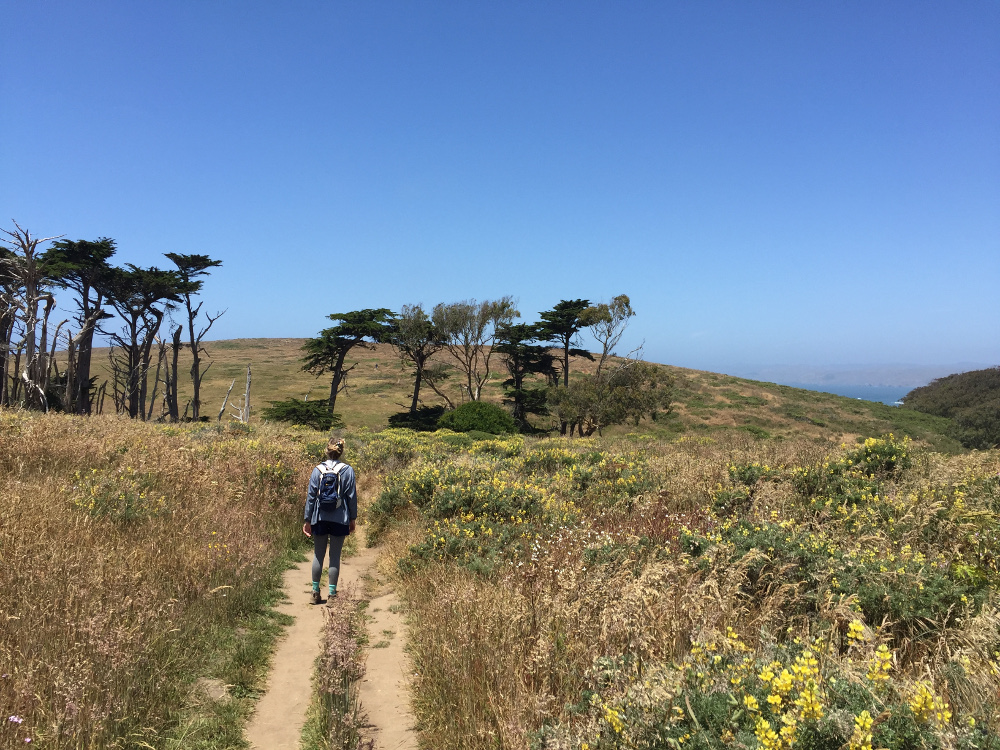 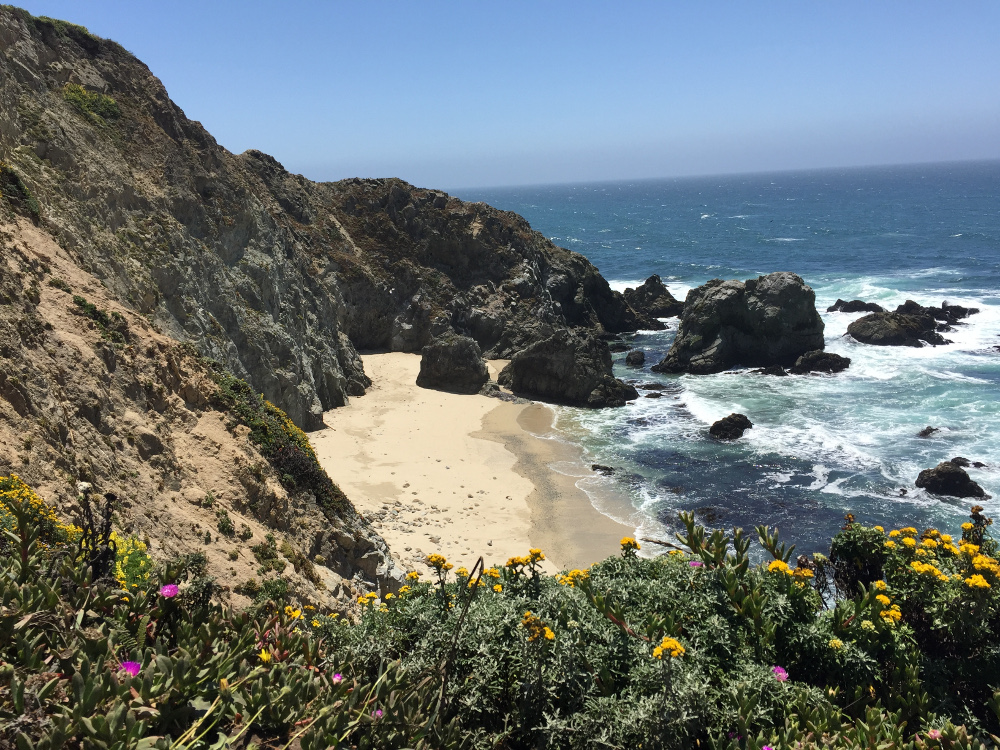 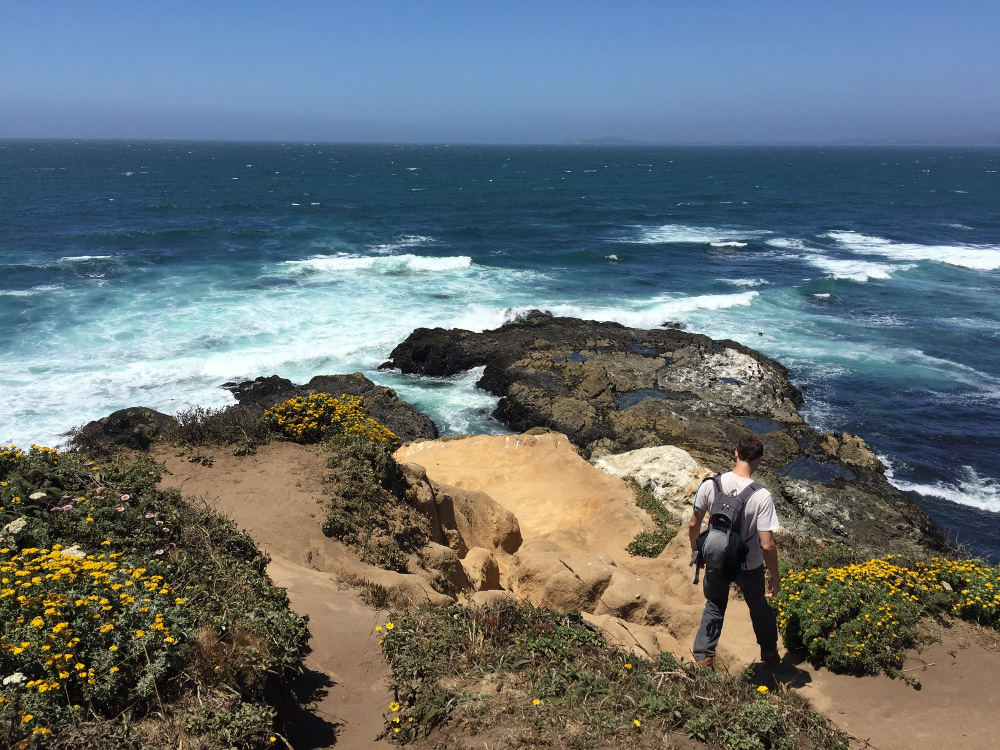 The next day we drove out of Point Reyes on 101 after spending some time hanging around and checking out Point Reyes Station. 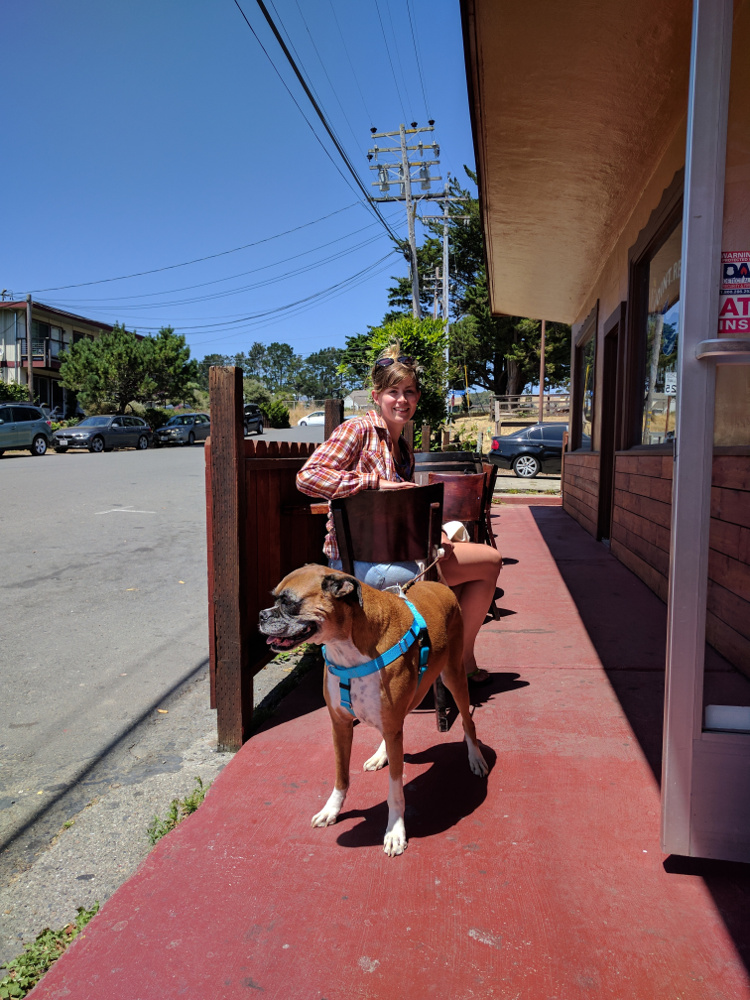 They had some kind of festival going on with music, a farmer's market and gallery openings. From there, we took a risk driving into San Francisco - Owen had mentioned we could possibly stay at his place in SF. 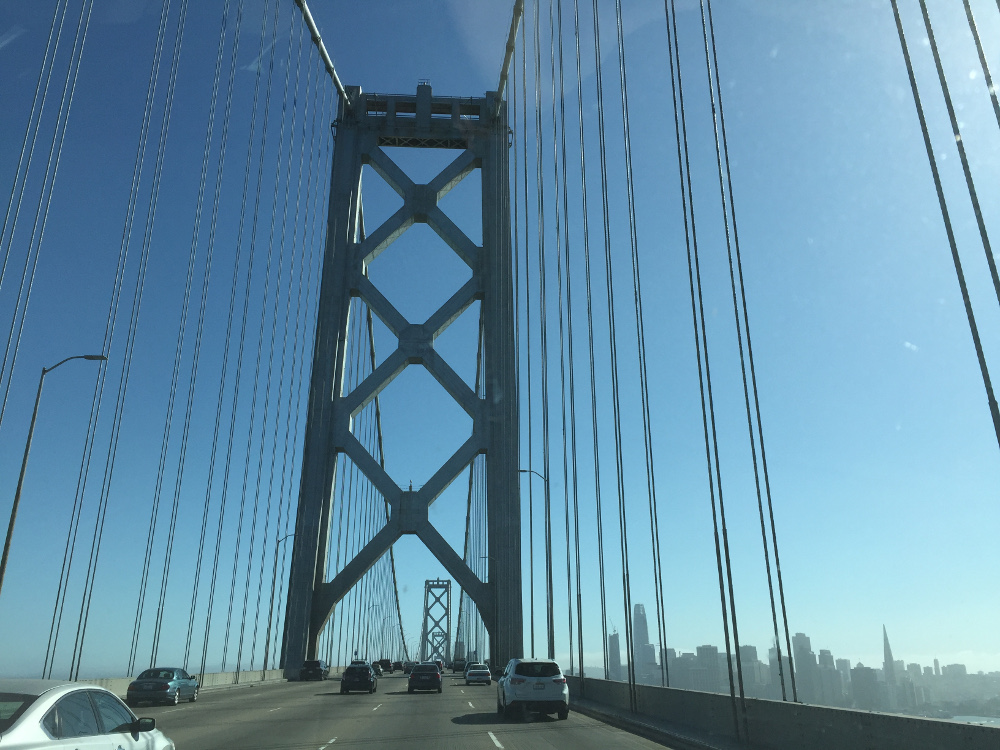 Long story short, we did get to the apartment (parking in Mission Bay was easy) but couldn't get into the apartment. Such is life. We floundered in a state of indecision for a little bit, wondering if we should try to get to Sacramento (our original plan), go to Oakland or stay. We decided to stay, hoping we wouldn't get hassled for sleeping in the van, and rode our bikes to a nearby brewery. Beer was good, Dan got into a conversation with a one-eyed Czech man who wrote poems on his flip phone with a monocle style magnifying glass. He later sent Dan some of the poems via text and has a few times since. They aren't terrible. We made it back to the van, which is always good to see as intact when we've been away from it for a while, and quietly ate some food in the dark. A man smoking outside of his apartment had eyed us suspiciously earlier and we didn't want to draw attention with the lights on - the area we parked in is super clean, new condos with no sketchy elements at all. The night was fine, though, and in the morning we skidattled on out of there with no problems.

The next day held a bit more confusion as we tried to park in the lot of an artists' community in Oakland which a friend of (my sister) Jenny's had lived. Jenny gave us a code to open the gate and instructed us that, in the event of someone asking us who we were, to tell them we knew "Sherry and the quilters." haha. We rumbled into Oakland across train tracks and I felt distinctly conspicuous, like we had "STEAL FROM US" painted on the side of the van. The artist's community was in a sketchy area, and even with the gate code (which we didn't even end up trying) it just didn't feel good to leave it there. We tried to park at Jenny and Vinny's but also ditched that effort for lack of space and drove to an Alameda beach park. It's good to have space with the van. Jenny and Vinny tolerated our general scatter and anxiety and met us there with my niece Meera for lunch. We relaxed, ate and got sunburned knees. 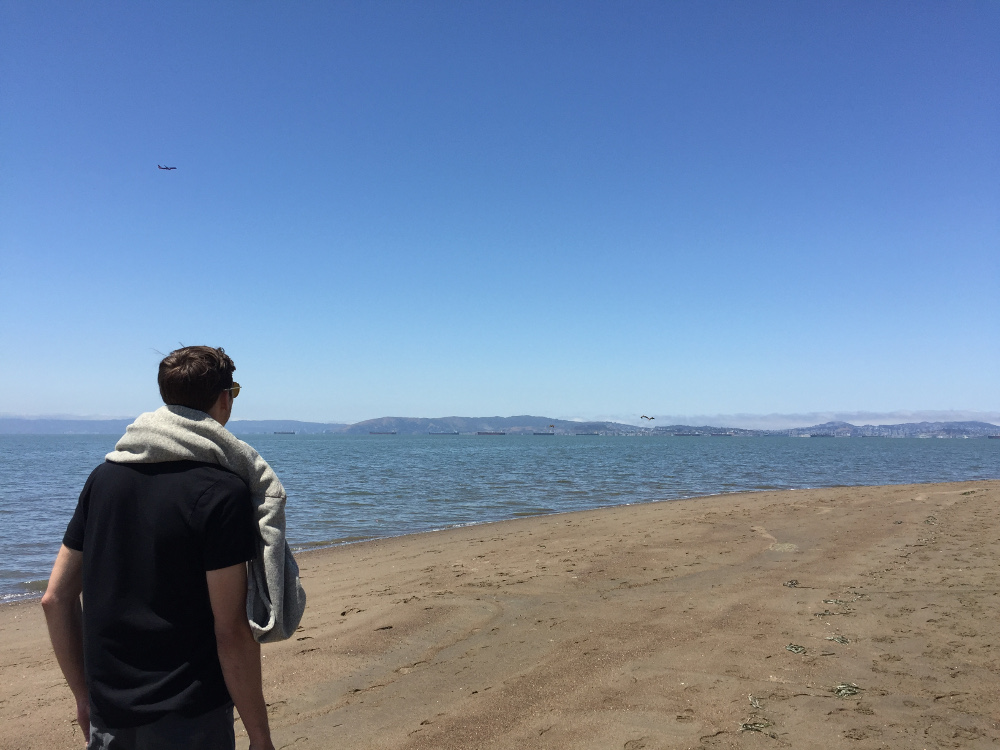 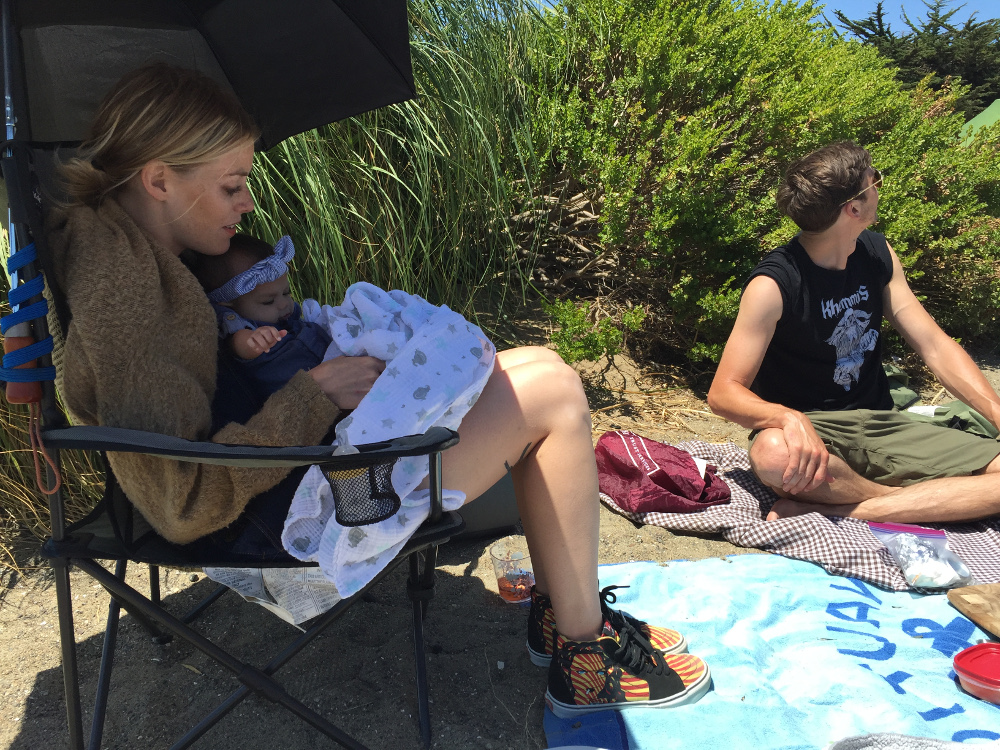 We had planned to try to stay with J and V in Oakland but ended up driving to Sacramento to see my family that night. We spent the night and the next day eating delicious homemade food, talking, lounging around, planning our next leg and swimming in the pool. Went out for dinner with Celeste, Richard (aunt and uncle), Gabe (cousin) and Olga (grandma) then to Top Golf, a driving range/bar with a sort of a nightclub vibe, with Gabe and his parents Tanya and Darrell. 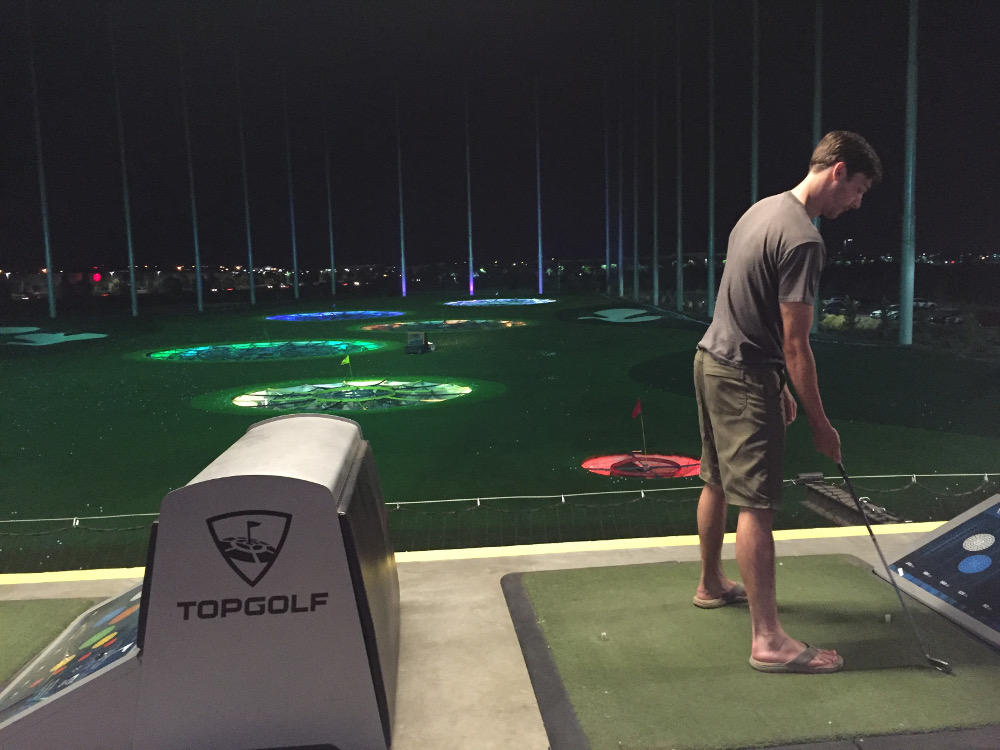 It was fun and felt good to be outside after it had cooled down.

The next day, the morning of the 4th, Dan and I took an Amtrak train from Roseville to Oakland to spend the holiday with Jenny, Vinny and Meera. 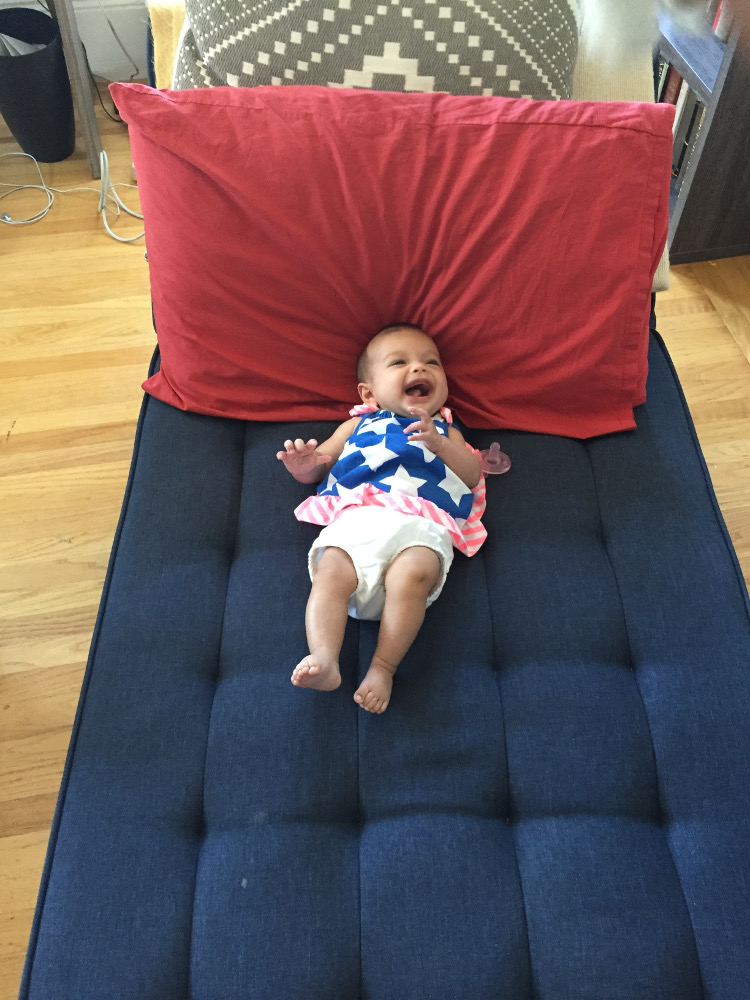 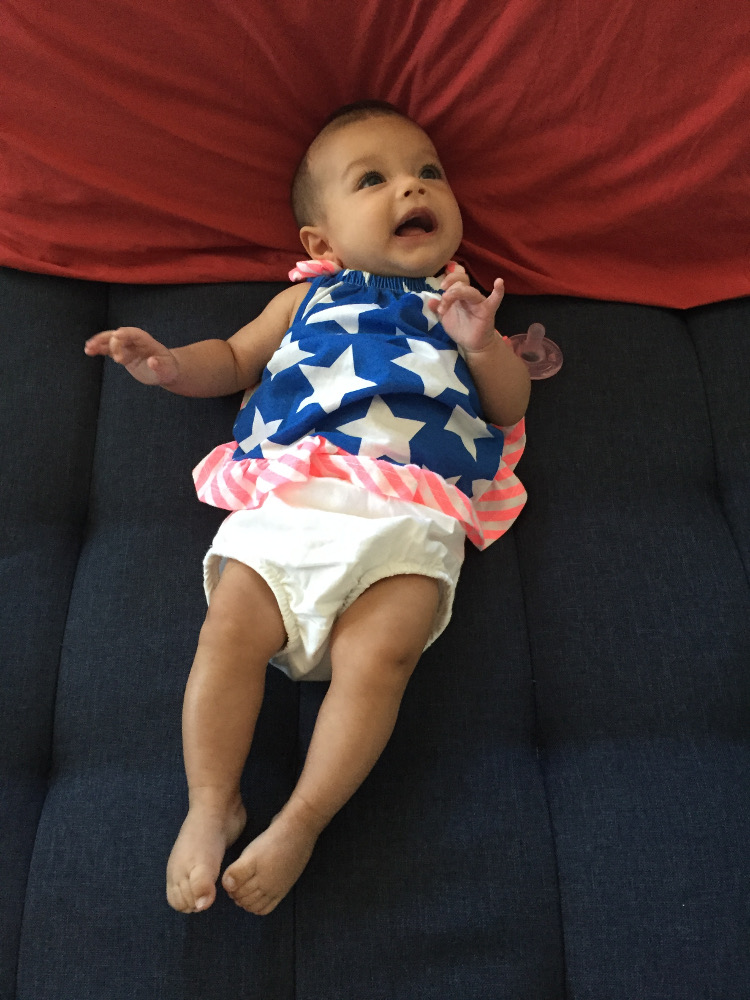 We helped cook a bit for the party that night, which ended up being fun and relaxed. The amount of fireworks in the evening was unlike anything I had seen in a neighborhood, no professional show, just people lighting off fireworks. It was kind of crazy. I wish I took more pictures of the party and of Jenny and Vinny.

The next day I spent with Jenny and Meera, Dan went into San Francisco. I babysat for about an hour which alternated between fun and stressful. Luckily she didn't cry much and was just an overall well-behaved baby. lol. 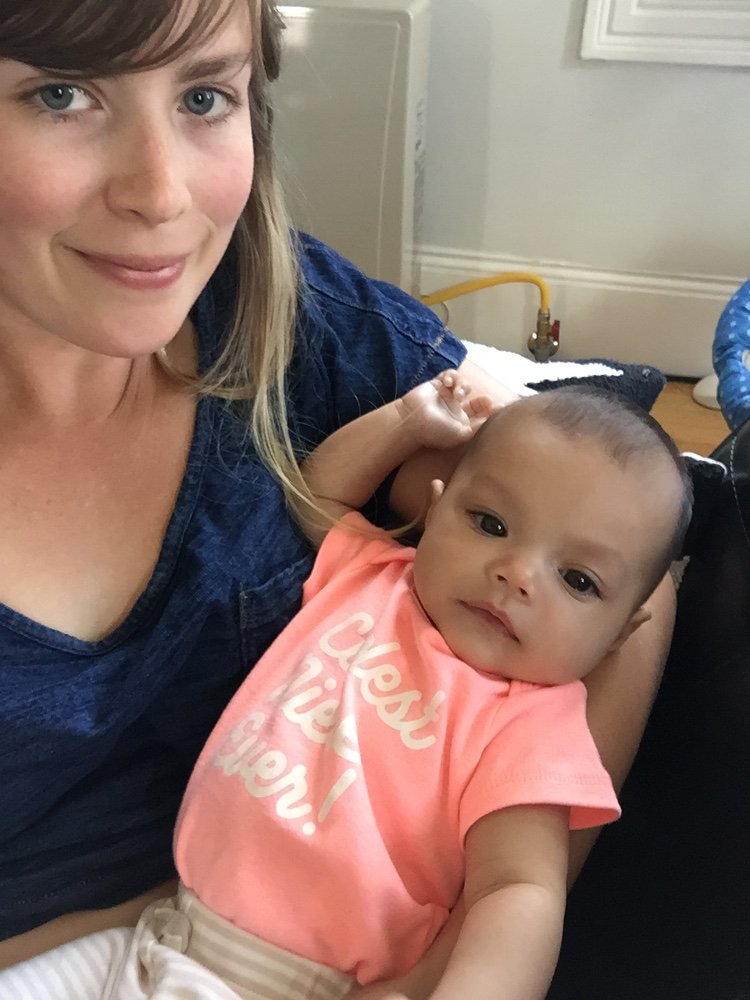 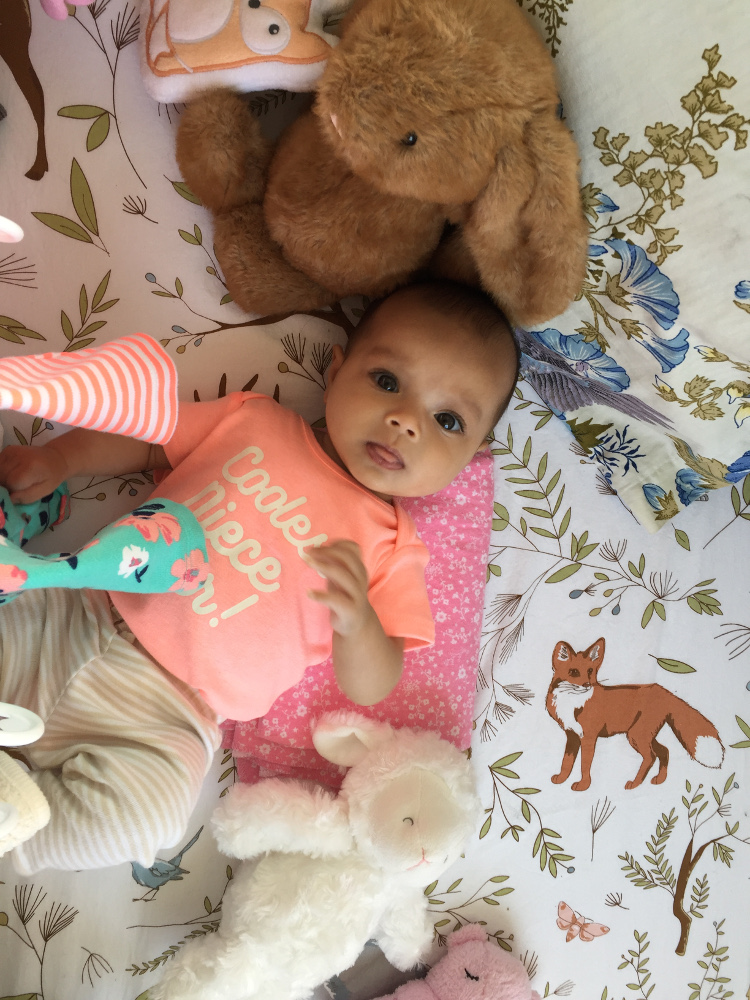 We came back on the train to the Sacramento area to stay with my family, Richard, Celeste, Olga and Gabe, the night of the 5th. They were way too nice to us and offered us too much good food. It was a really good visit. 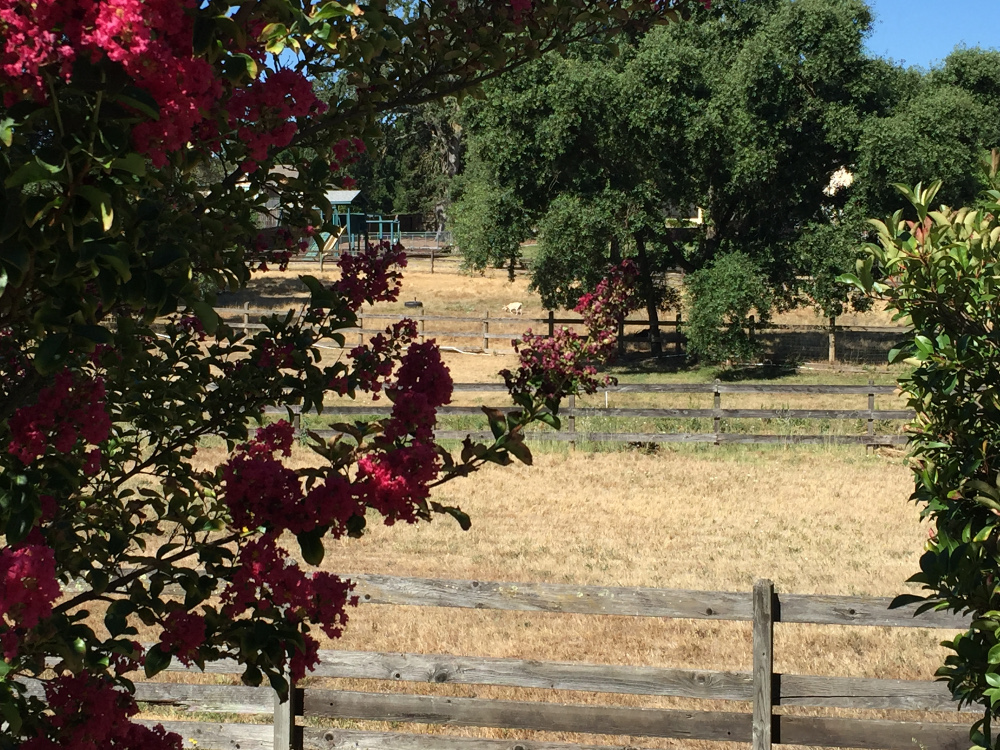 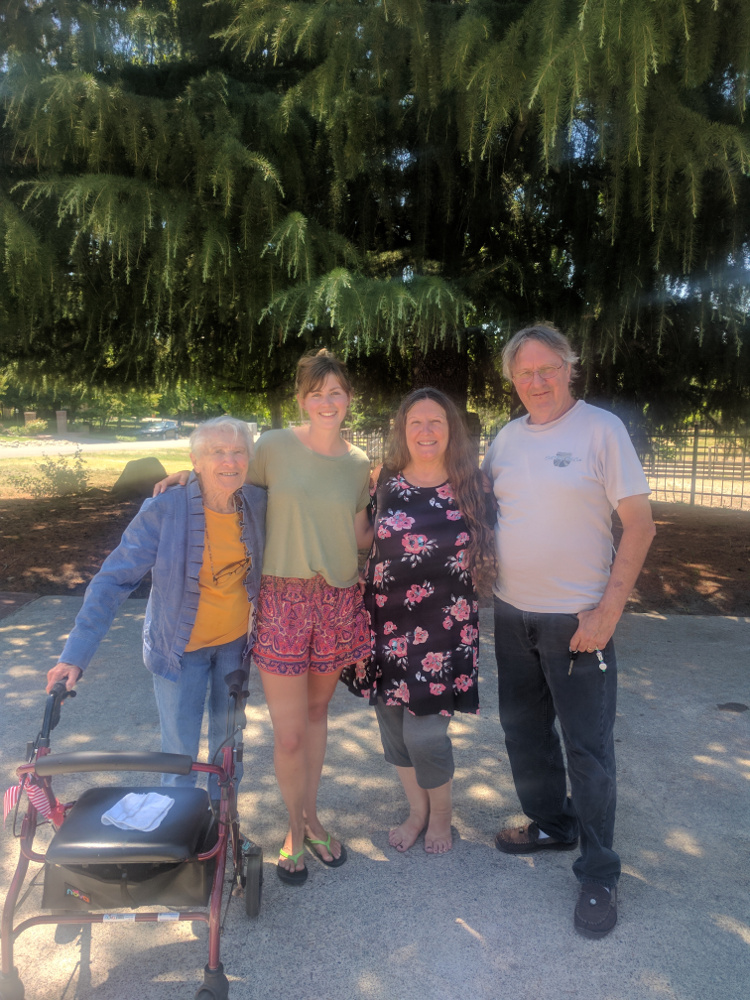 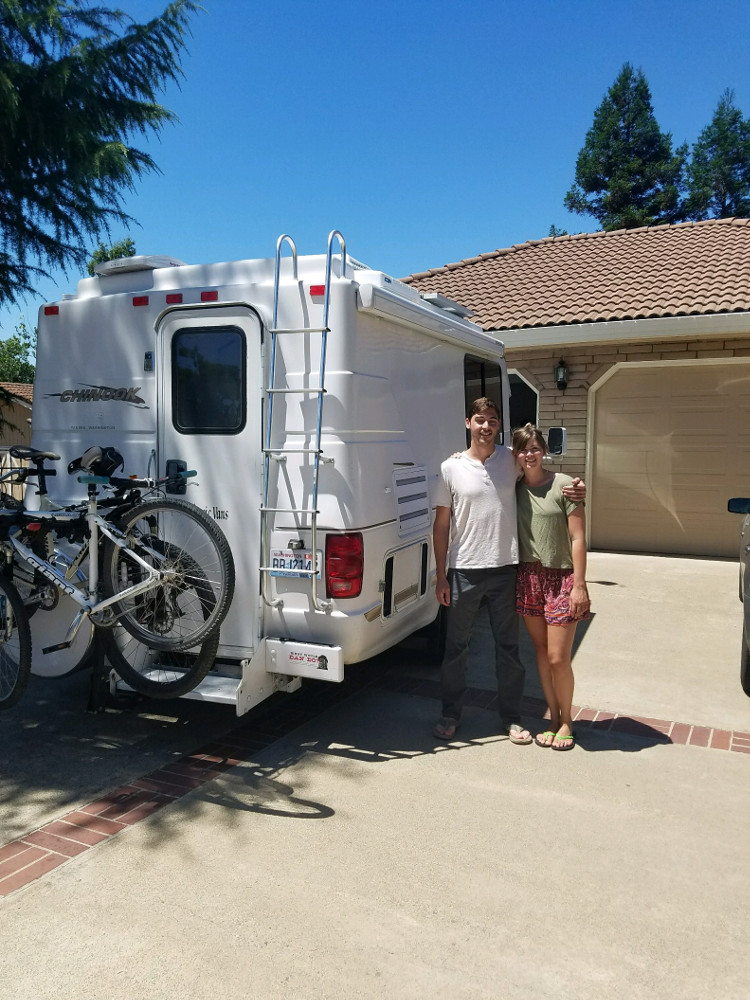 We are in Reno now after spending a couple days around Lake Tahoe, details in next post.