I keep saying it's stressful to go into the city, and here we are going to another one. This time though, it felt like we had more of a plan and more of a reason to go through the trouble. Our plan this time was to just spend a night near the city and then explore some of the natural areas in central Texas, the "Hill Country" region.

Looking over the Austin subreddit (most cities have a subreddit and they're excellent places to figure out what's going on while you're there) we came across a roller derby bout that was happening that night, which sounded like something interesting to check out and a good reason to get into the city. Between this and the temptation of authentic Texas BBQ for dinner, we decided to brave another city. Zilker park is located just outside the city center, on the south side of the river but an easy walk into the downtown and parking was free until 10 p.m., so we found a spot there and made our way into the city for the evening.

Unfortunately the barbecue was underwhelming at Cooper's Old Time Pit Bar-B-Que. Not awful, but nothing to write home about (or to drive to Texas for). It's the only place we tried so I'm sure there are better options, but we didn't make a great pick this time around. It was still a good meal and the pecan and peach cobbler almost made up for the mediocre meat.

After dinner it was a short walk to the convention center for the roller derby championship match, between the Cherry Bombs and Putas del Fuego. It was a big event with multiple bars, a punk band halftime show, and a banked wooden track where the dozen or so female skaters would buzz around and wreck each other within a fairly complicated set of rules that I still don't fully understand. 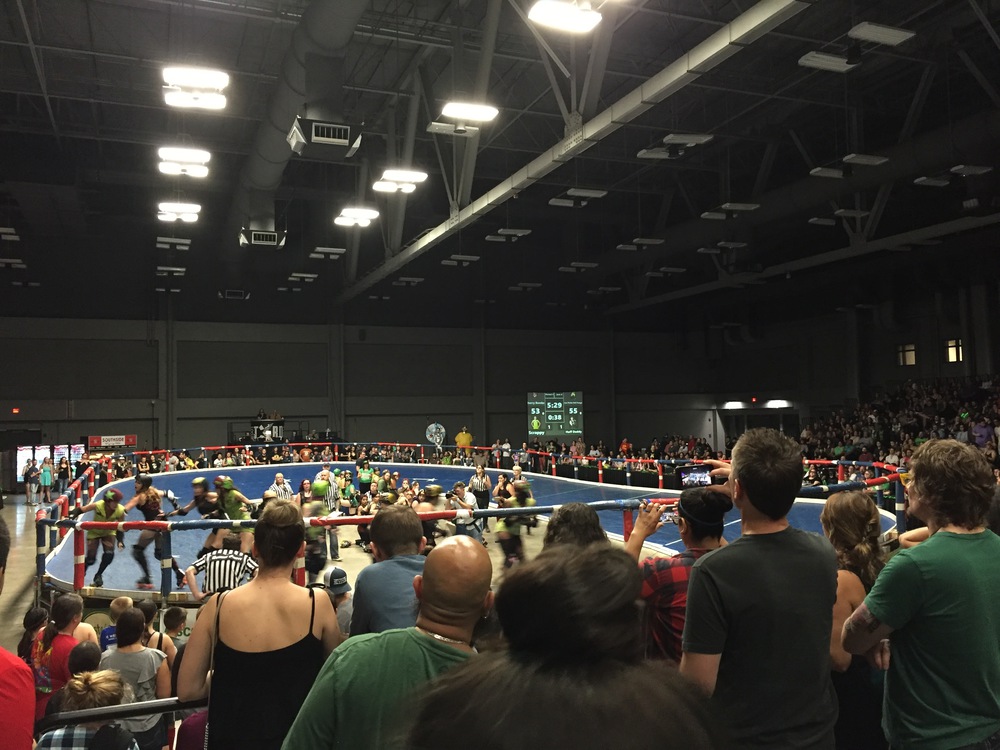 The basic premise is that one person from each team on the track is designated as the "jammer", who starts out behind the pack and must break through the main mass of skaters, half of them being teammates trying to help, the other half opponents trying to block them from advancing or sometimes outright trying to wreck them. If the jammer succeeds in getting through this pack, they then try to lap as many opponents as possible, each one lapped getting them a point. It was pretty exciting. We left just before the end of the match since it was almost 10 p.m. and we were having visions of the van with a ticket, or worse a boot, if we got back to Zilker park too late. Some nice city views on the way, despite the rush: 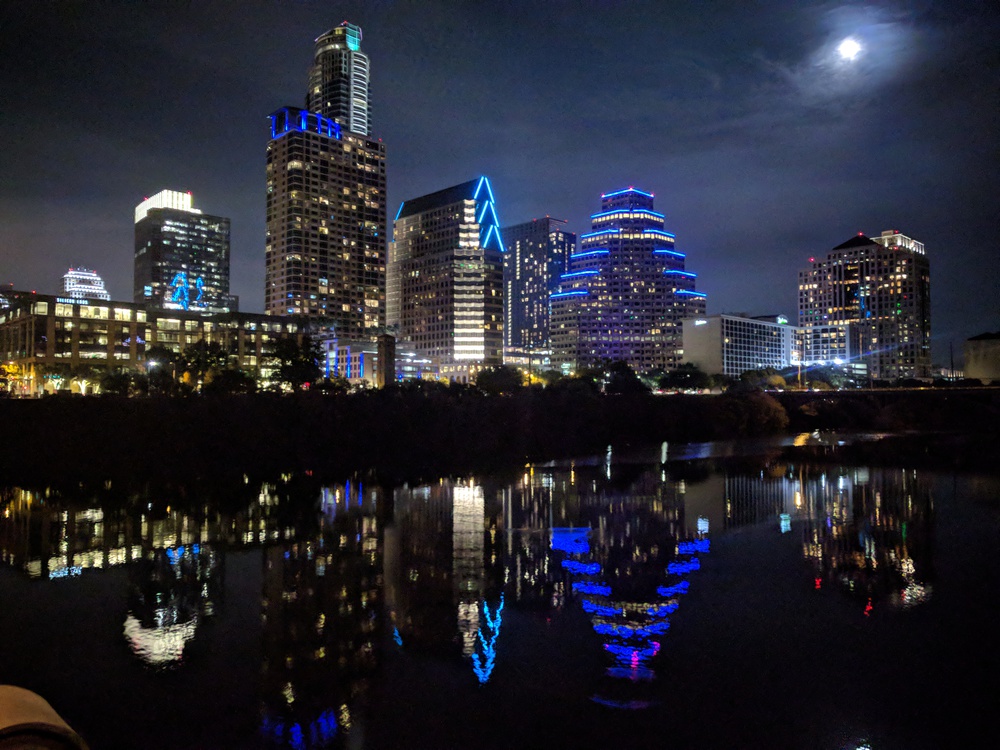 We jogged the last quarter mile across Austin in the dark, and luckily the van was unfettered and ready to take us to yet another in an endless string of Walmarts across the country for a night of passably restful but entirely free sleep. A well-executed city visit.

Heading back out into the vast countryside of Texas, we made our way to a famous swimming hole called Jacob's Well. It's a natural artesian spring that created a giant underwater hole. The first chamber goes 30 feet straight down, and water is clear and blue. 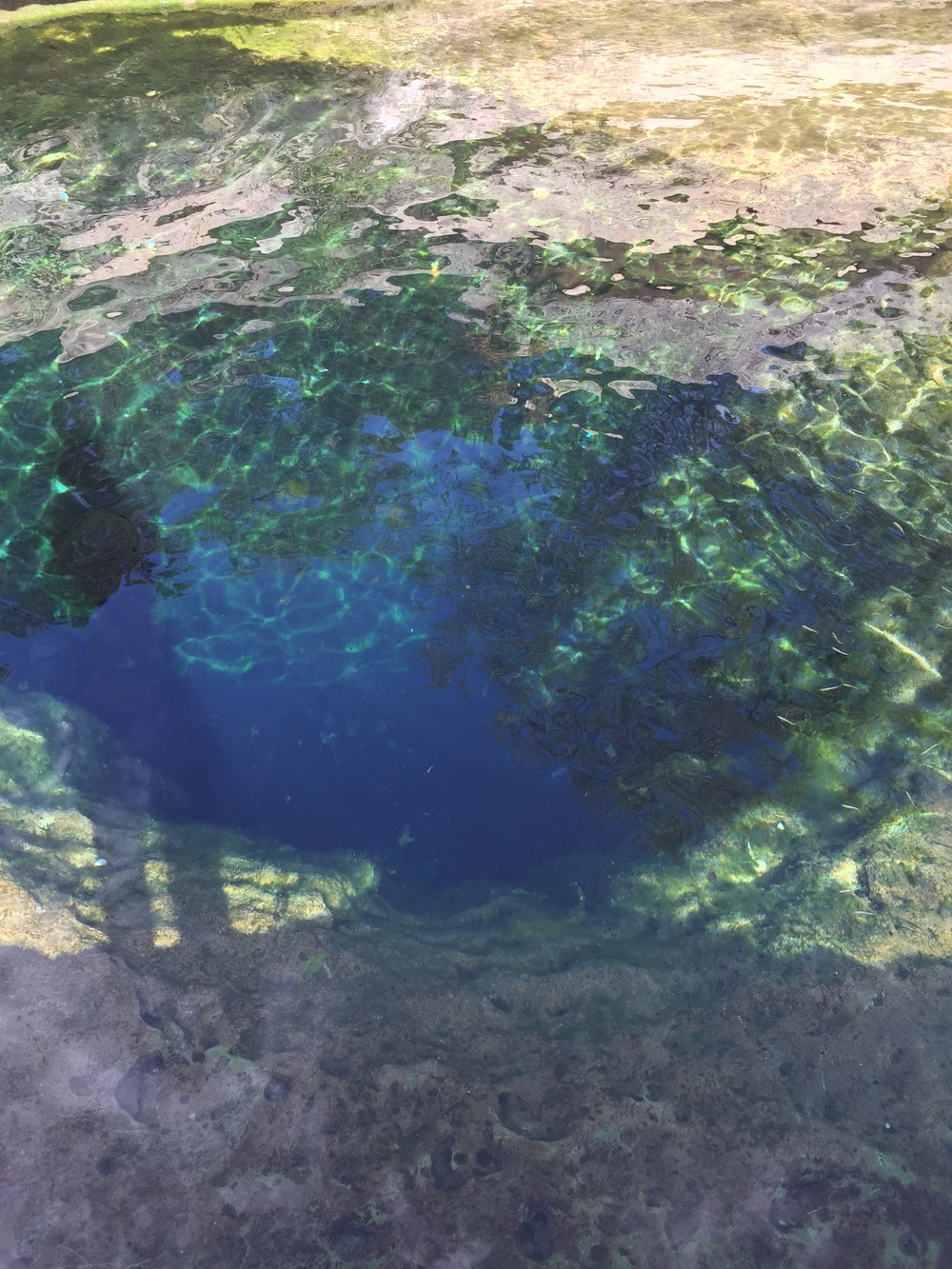 Much to our dismay, there were giant red signs stating that swimming was closed! This seemed harder to ignore when there was a park ranger angrily sitting near the well once we arrived. But luck was on our side this time. A local Texan who owned a pie-shaped slice of this land before it became a park showed up, and he gets to swim whenever he wants with whatever "guests" he would like to accompany him. We became his guests, along with 3 other American road-trippers, from Sweden! We weren't prepared with swimwear due to the signage we saw at the entrance, but couldn't resist jumping in with whatever we happened to be wearing. 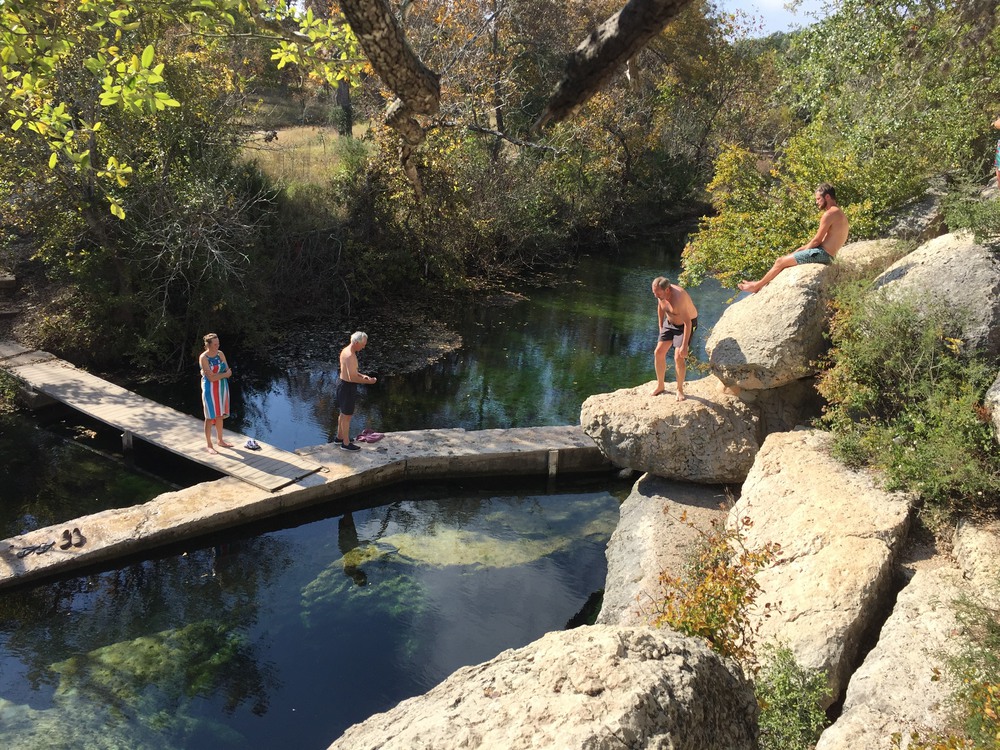 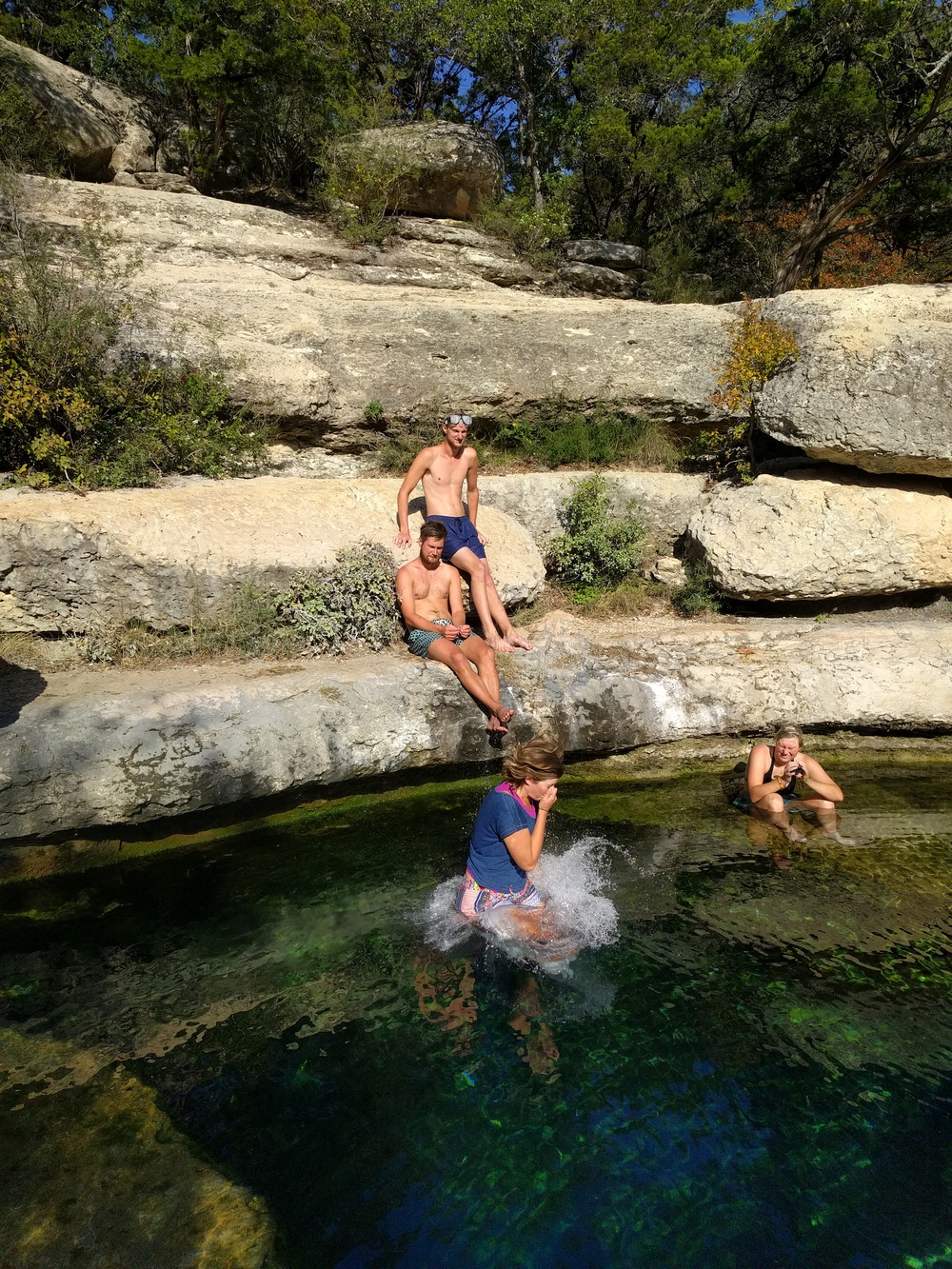 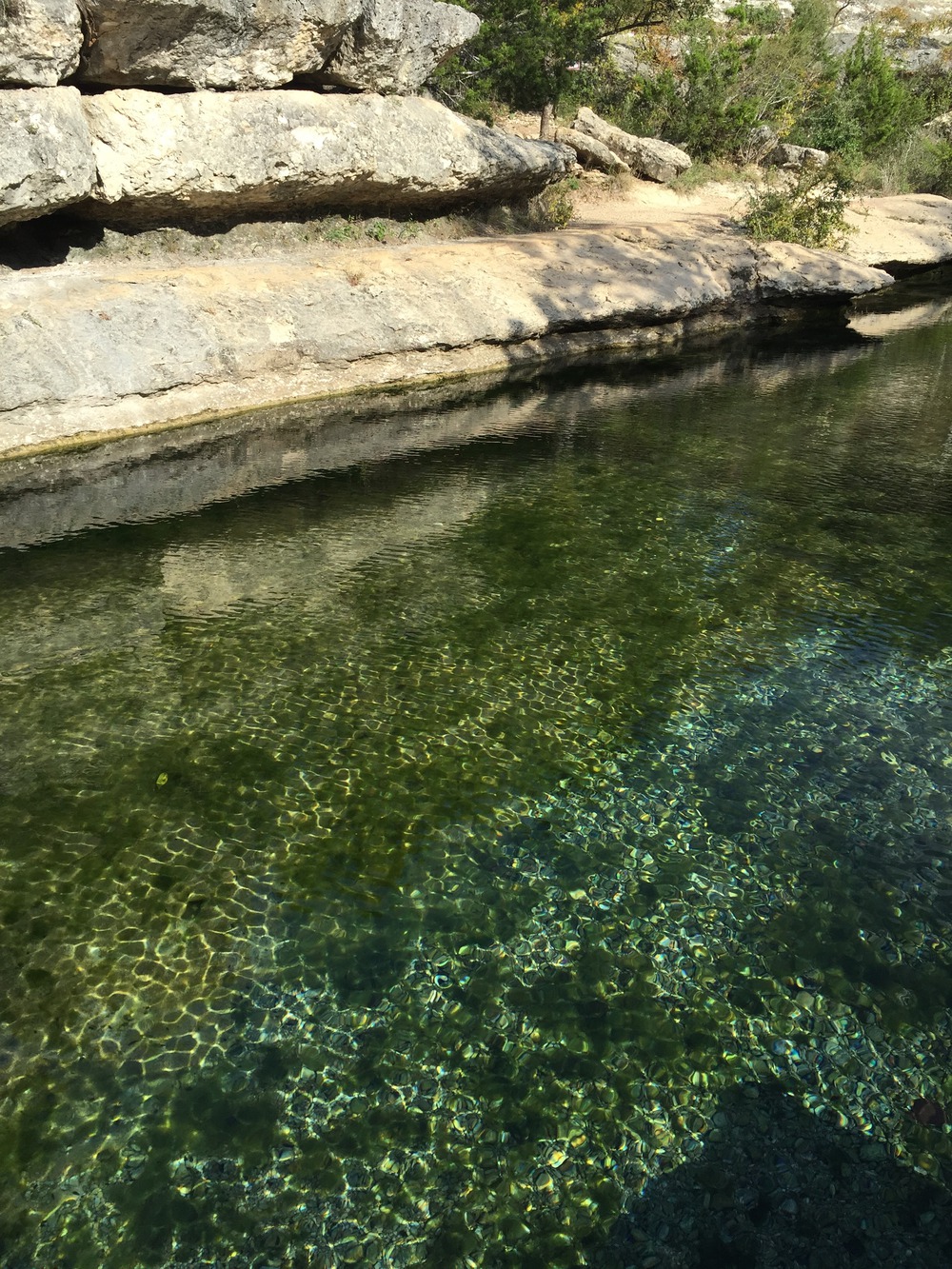 Thanks, anonymous Texan, for saving the day.

Feeling refreshed, we headed to our next stop and where we planned to sleep for the night, Pedernales State Park. We ran into more troubling signs when we arrived: the Park was full for camping. Oh well. We paid the entrance fee anyway just to get in and use the facilities, and to see the mostly dry riverbed and rock formations. There were ample warnings about the flash flooding that can happen here so it being dry is not a bad thing. 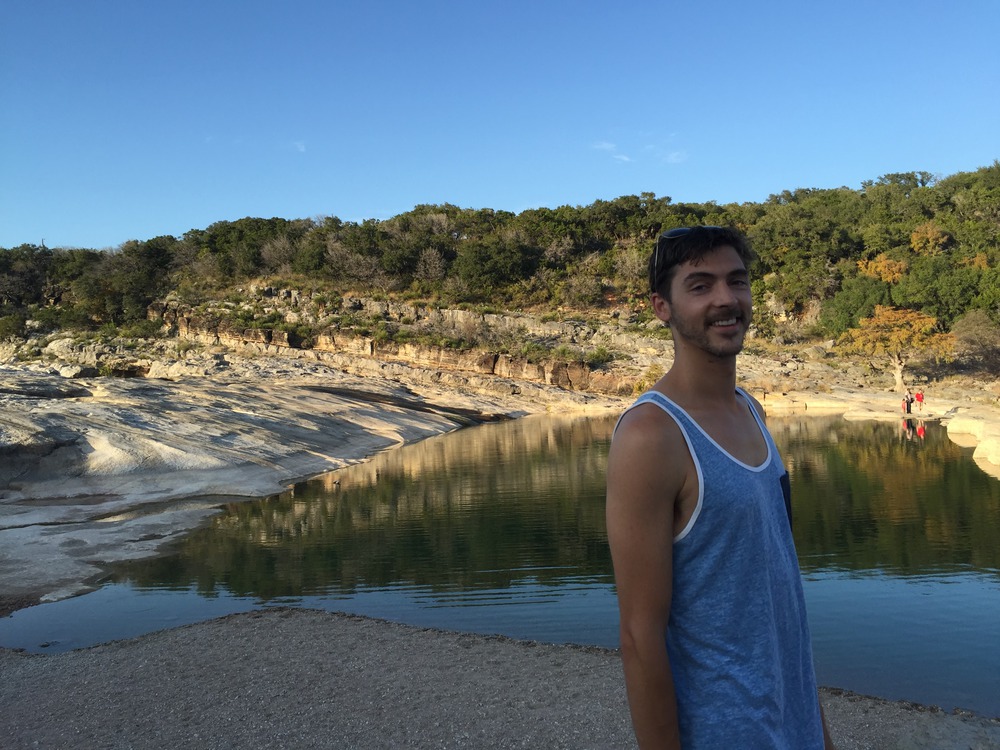 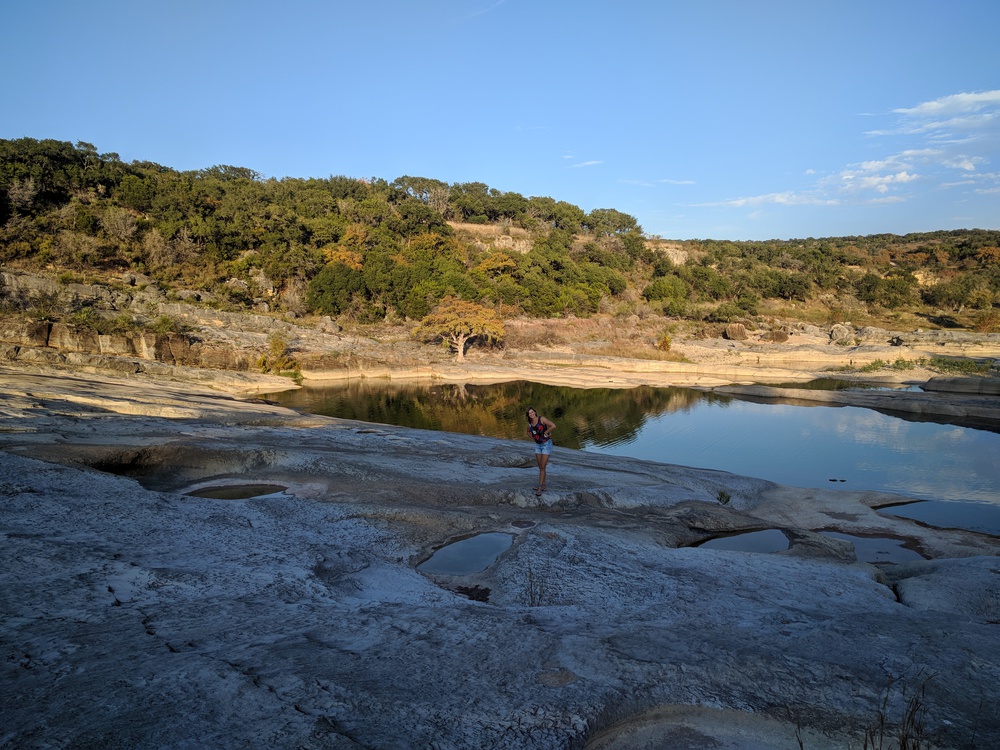 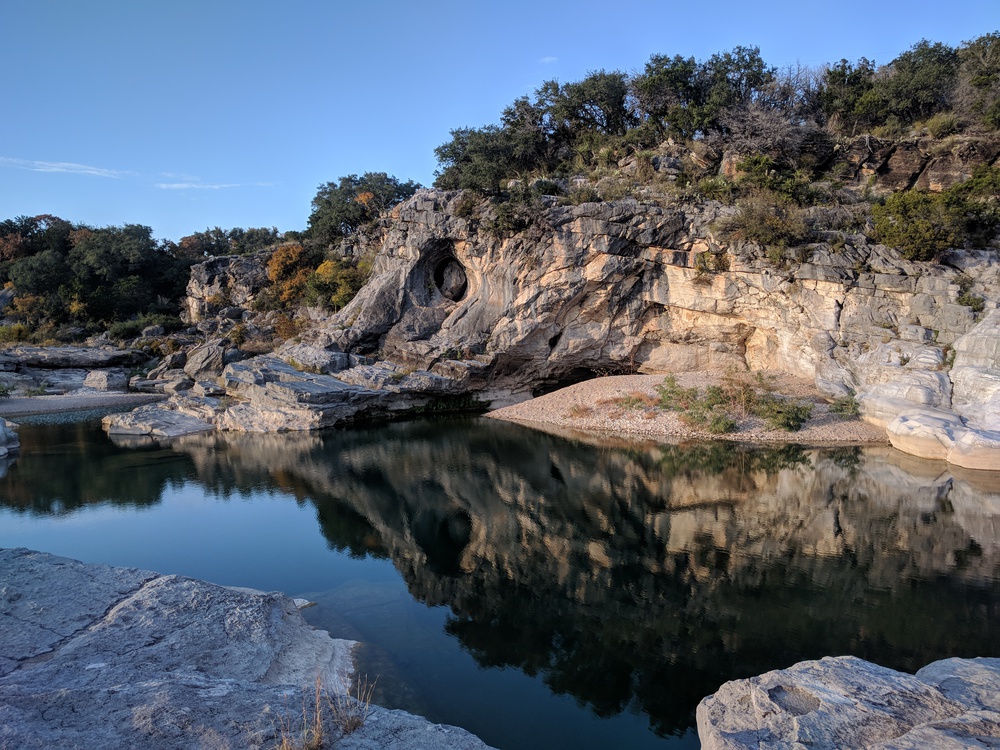 After exploring we snuck a shower in the camp area, whipped up a quick dinner in the van in the picnic area, kicked back for a few minutes, then we were off to find somewhere to park the rig for the night. The next day would take us to another park in the Hill Country, and then into the desert lands of West Texas, towards Big Bend National Park. 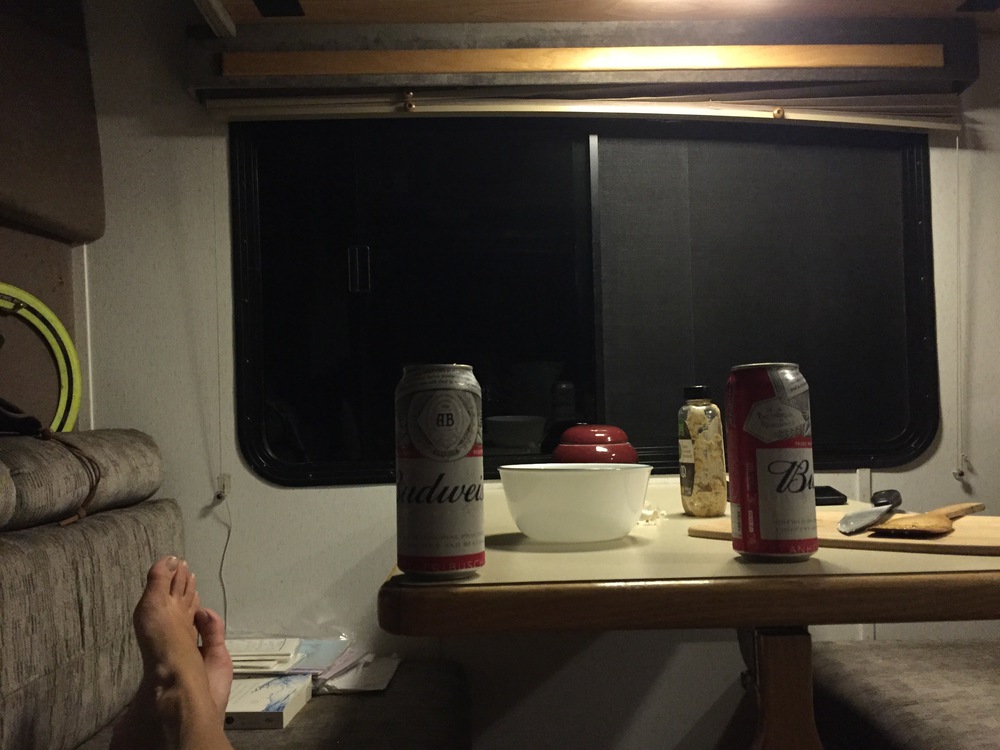 Next:  Across Texas to Big Bend