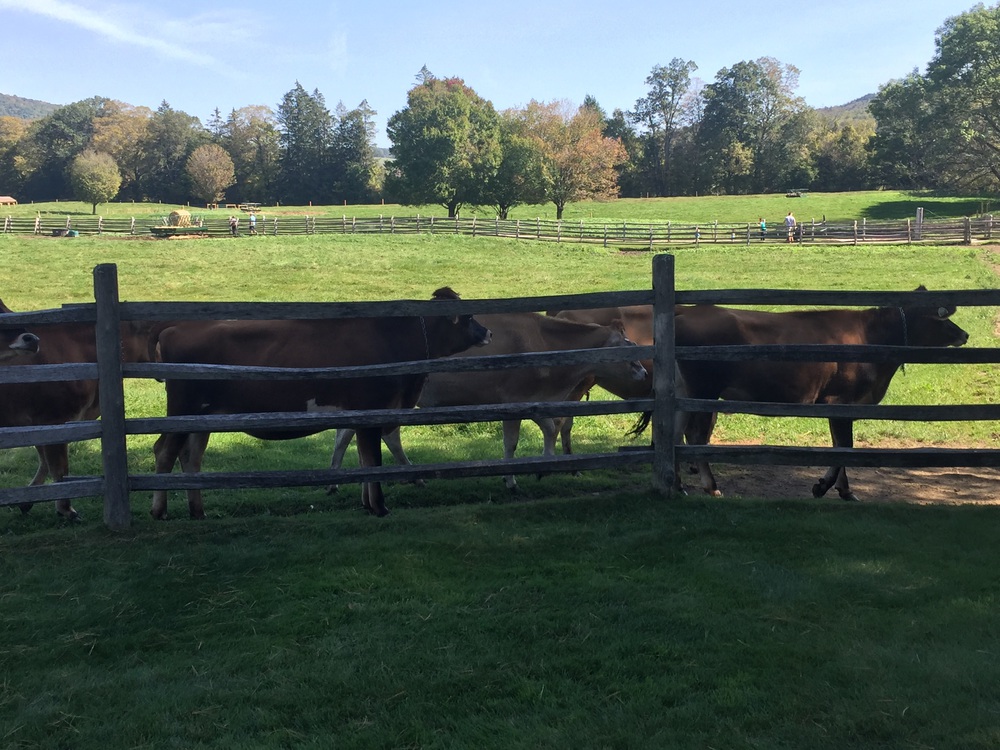 While Rosie was holed up in her cabin for her residency, I had ten days to kill driving and biking the area. The first day I took a trip up to the city of Burlington to wash the van, stock up on food, and do some laundry. Then I turned back around for the more rural part of Vermont where I was able to find some good free campsites in the Green Mountain National Forest land. It can sometimes be a little creepy out in the loosely-regulated forest campsites, but this one was a good find. I had my own distinct site with a fire ring and a picnic table, and it was right next to the creek and some trails to go walking up in the forest. 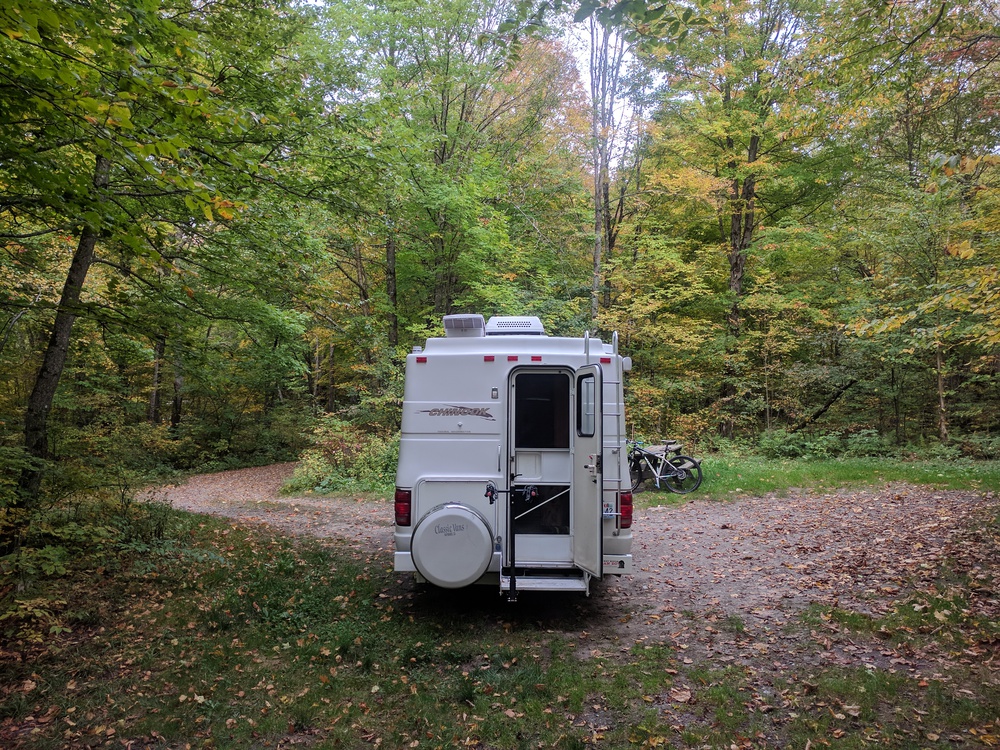 I split my time between hanging out here, some random parking lots, and going back to visit Rosie every couple days so she didn't get cabin fever being stuck in a tiny shack in the woods. The lengths of time alone were good for both of us though, because she had a lot of writing and drawing to do, and I had time to plan an upcoming surprise visit to Lake Placid after the residency.

It wasn't hard to find good mountain biking trails in Vermont. The Trailforks app is pretty much the standard for crowdsourcing and searching mountain biking trails, and there were plenty of trails listed in the area. There were even some planned routes listed that were still under construction by a local trail building company. It's not always the case that the mountain biking community is active in a given area, so it was a lucky find.

I rode the trails that were still under construction (they were 90% done, still great riding) until they dead-ended at a small lake. 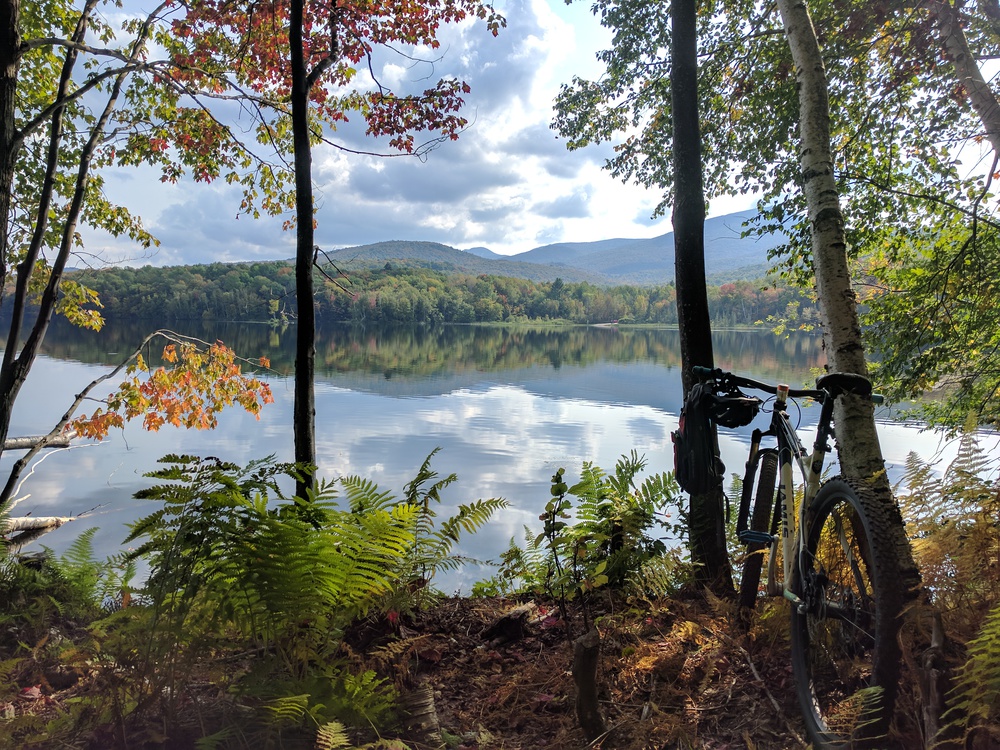 Moments after the picture was taken, a guy about my age glided into view on a paddle board. He was close to shore so we started talking, and it just so happens that he's involved in building mountain bike trails nearby, so he started recommending other places to ride. Days later I would end up seeing the same guy at the downhill mountain bike park at Mt. Killington. It seems like a pretty small world in rural Vermont.

On the morning of September 22nd Rosie's residency was over so we left the Hancock / Granville area for Killington, about 30 minutes South. We stopped at the Shelburne Library where Rosie was able to use the scanner to scan in all the drawings she produced during the residency for free. This can be a bit of a stressful process, so it's nice to find a quality scanner at no charge from friendly local people. Afterwards we drove up to the ski lodge on Mt. Killington, which is a downhill mountain biking park when the snow is gone. We spent a couple hours at a coffee shop and then camped at Gifford Woods, a state park nearby.

The next day we went to check out something Rosie had read about, the Vermont Woodworking and Forest Festival in Woodstock, VT. The festival was held on National Park land and the adjacent Billings Farm, a working dairy farm with Jersey cows.

We spent a couple hours walking through the woods in the National forest and looking at the historical buildings. There was a house that was originally owned by members of the Rockefeller family. We eavesdropped on the horse-drawn carriage tour guide to learn that the house had a bowling alley inside, and a Cold War era bomb shelter underground. Unfortunately the bomb shelter was closed for tours, so we only saw as far as the escape hatch in the ground nearby. 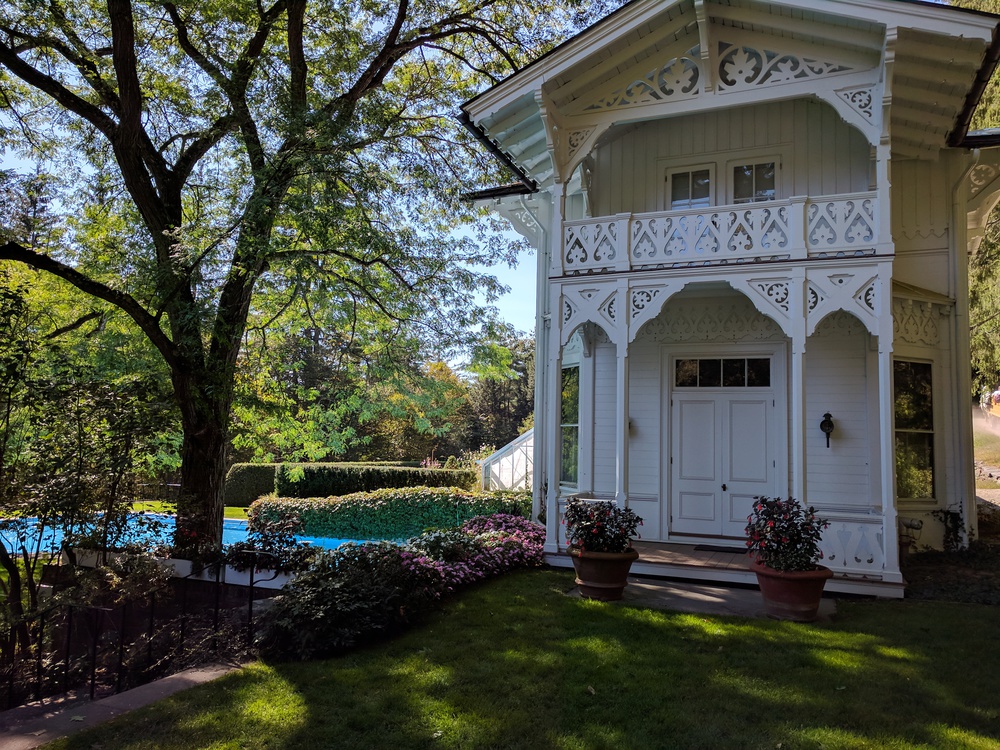 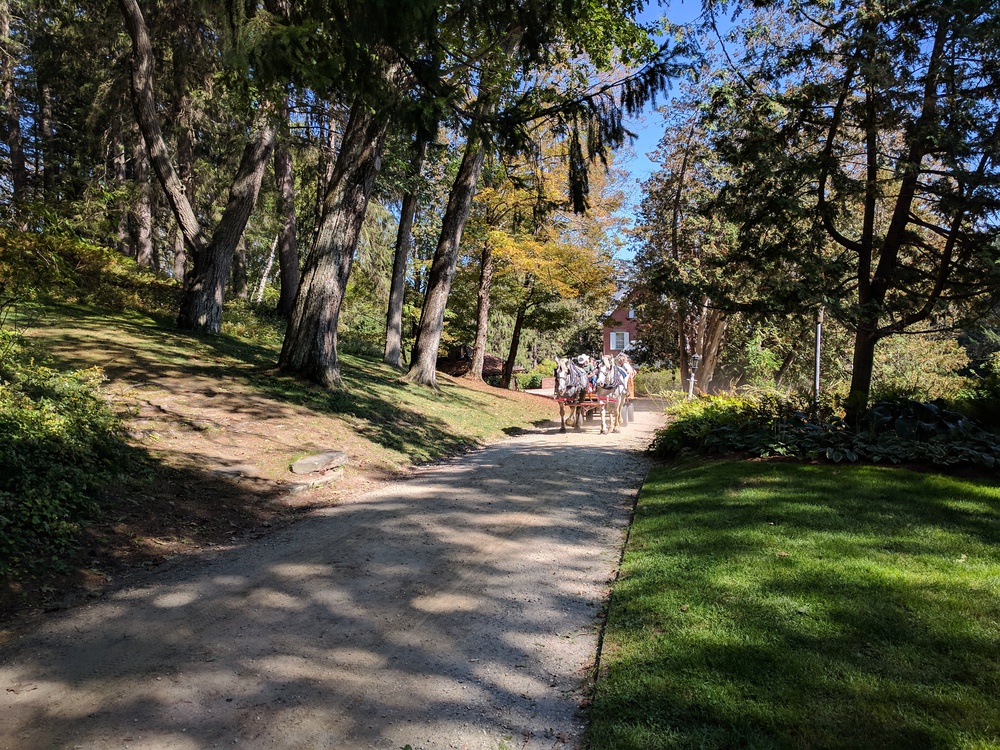 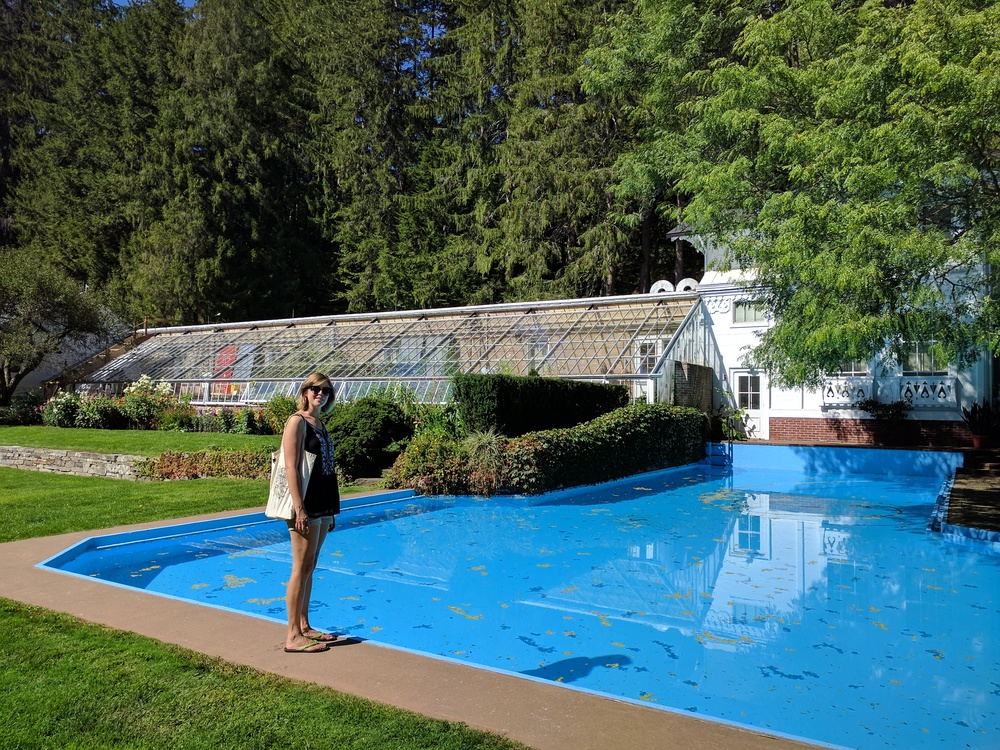 After walking the grounds we checked out the rest of the farm and festival. There were local woodworkers displaying wares, sheep, chickens, some small garden patches, and finally the Jersey cows all lined up for milking as well as about six newborn cattle in the nursery. 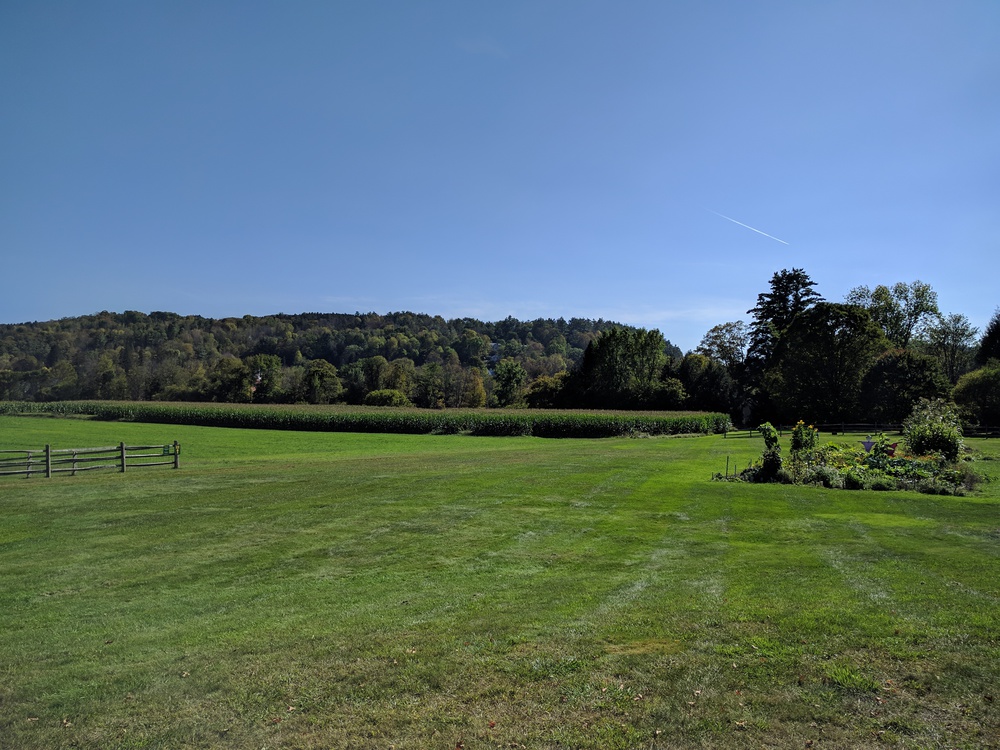 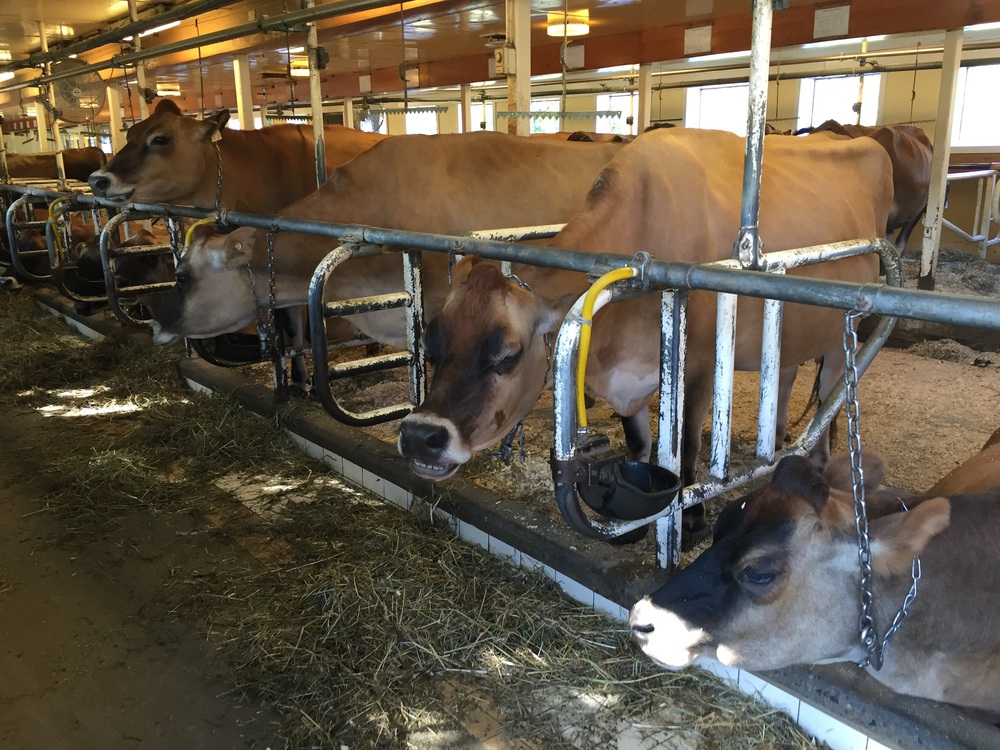 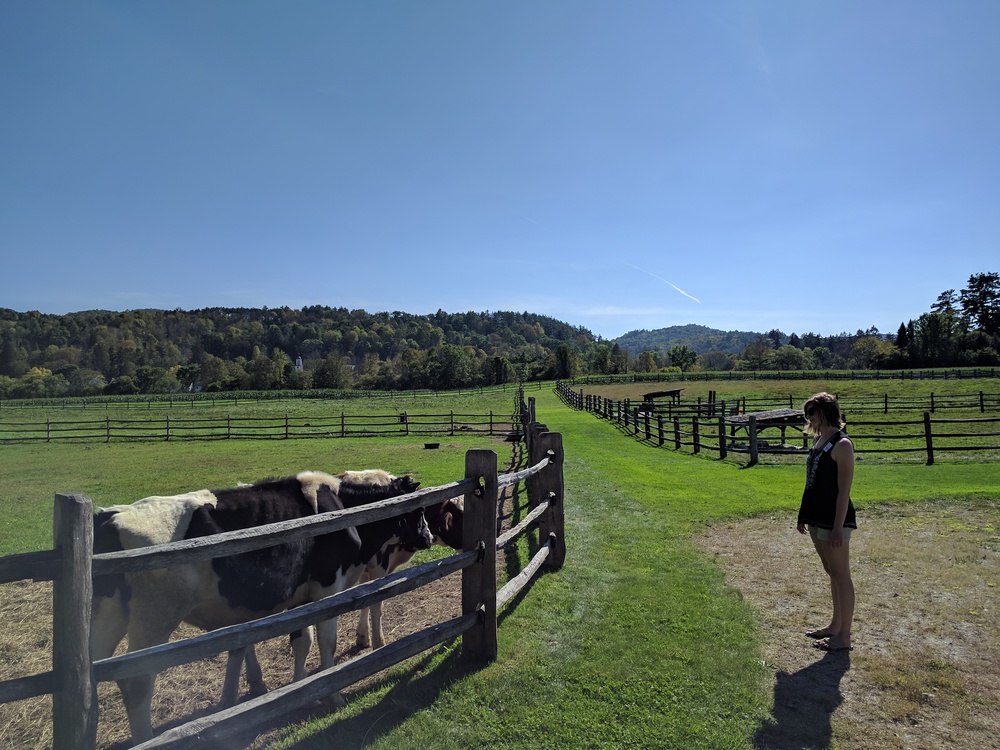 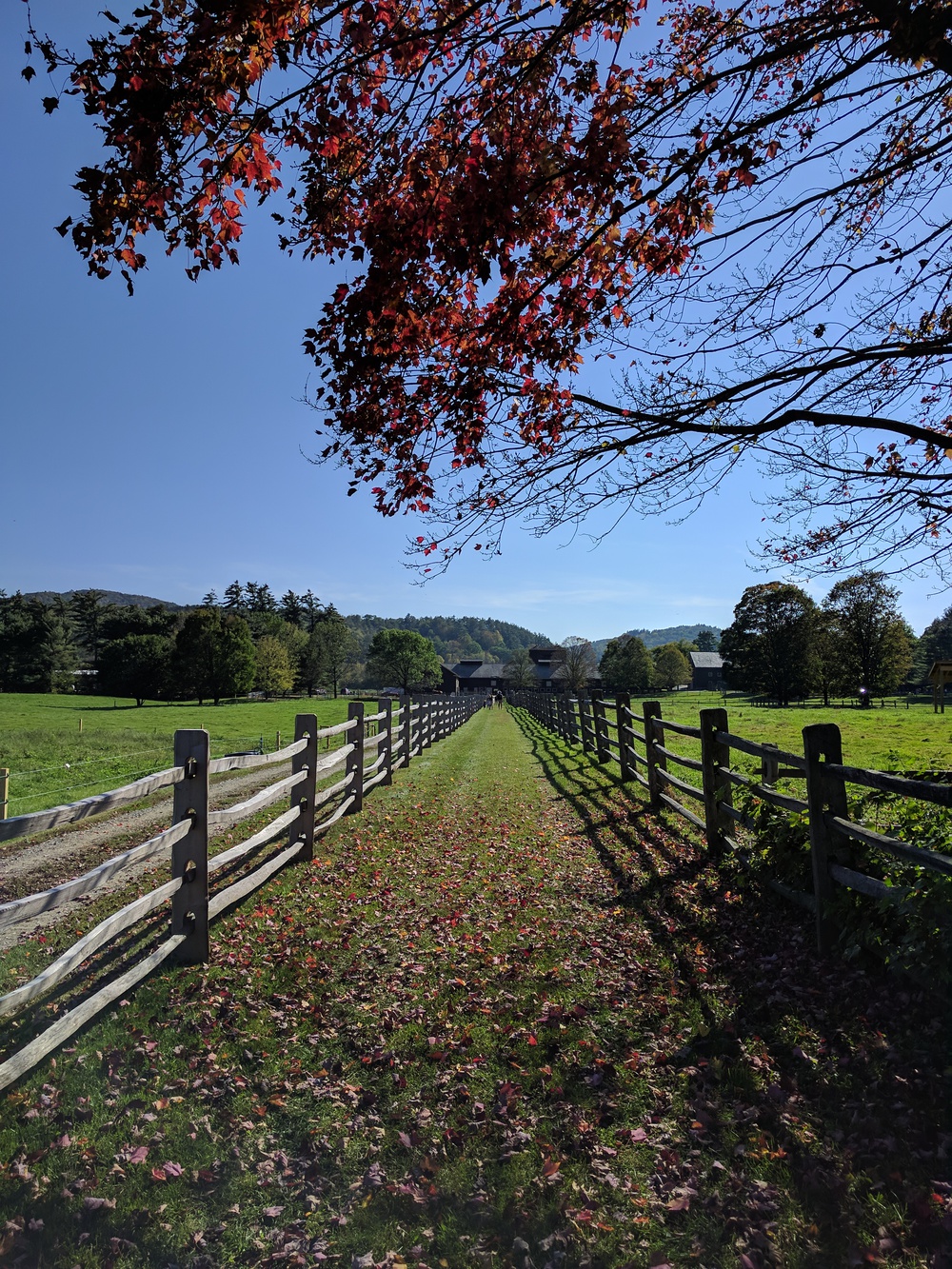 We debated visiting another farm to see if we could find some Maple syrup harvesting in action because we'd seen some pretty elaborate contraptions for sap collection just by driving along the rural roads, and thought it would be fun to see one up close. But we decided instead to drive towards Lake Placid, stopping in Ripton (between Middlebury and Hancock in the Green Mountains) where I found some more mountain biking trails. It was another really fun trail network, though there was an unexpected river crossing so I came back with some wet shoes. But the ride was still good and I stumbled upon the most elaborate trail camp I've ever seen, complete with a rustic "bar" and firepit, and what looked like a brick oven. Pretty unexpected. 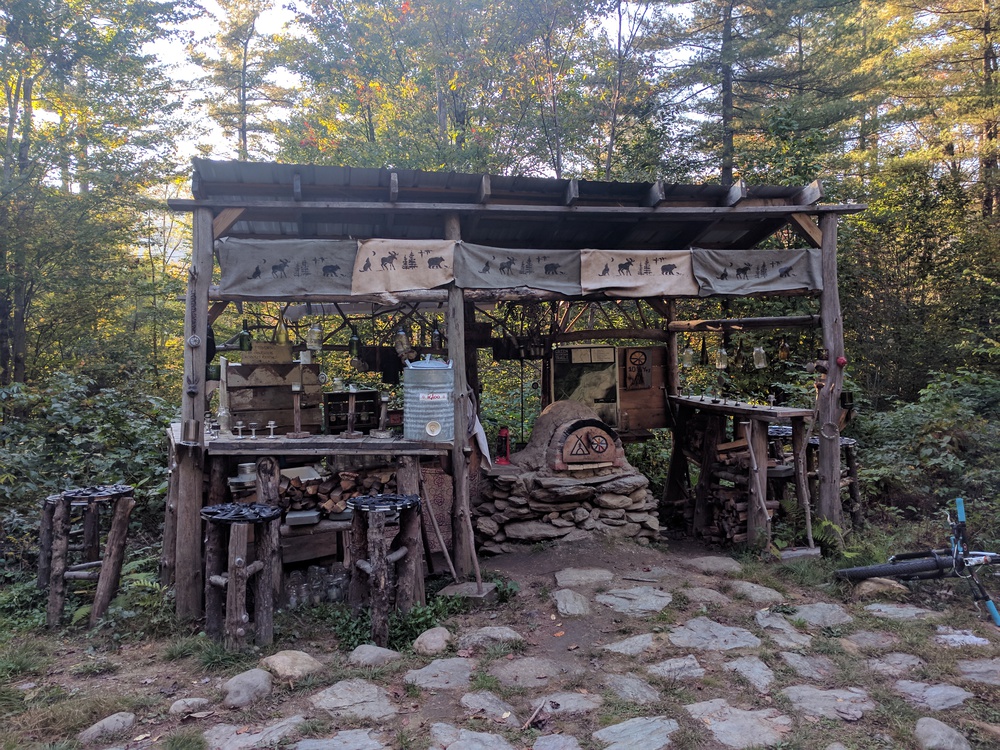 That night we drove the rest of the way out of Vermont stayed at Crown Point campground, a state park just over the Lake Champlain bridge, with plans to continue to Lake Placid in the morning.

Rosie knew that we were probably heading someplace that would provide a nice contrast to her rustic cabin stay, since we had talked about celebrating the completion of her residency with something a little more comfortable. We haven't sprung for a hotel at all yet on this trip, so it seemed like a good time for it. She knew something was afoot, but I was keeping all the details a secret leading up to it and hoping to exceed whatever expectations she had...