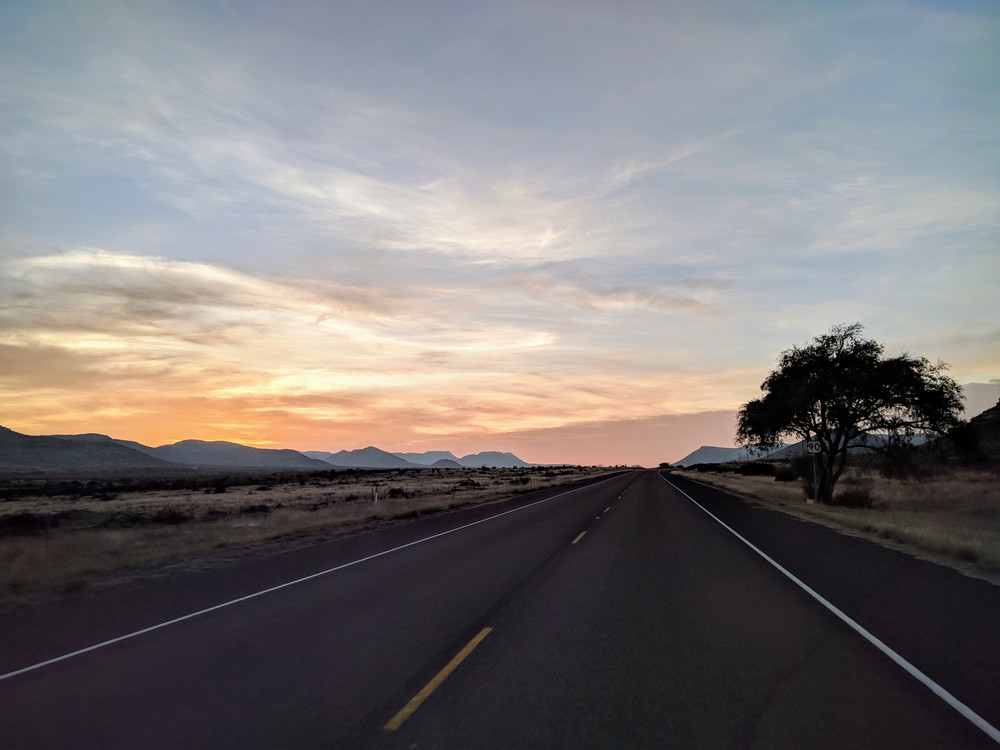 Across Texas to Big Bend

Still on our way to Big Bend National Park across the vast state of Texas, we took a couple detours to check out some more of the central Texas hill country before heading into the desert. Off of highway 83 we visited the Lost Maples State Park for a hike through some fall foliage, and past aptly named Monkey Rock: 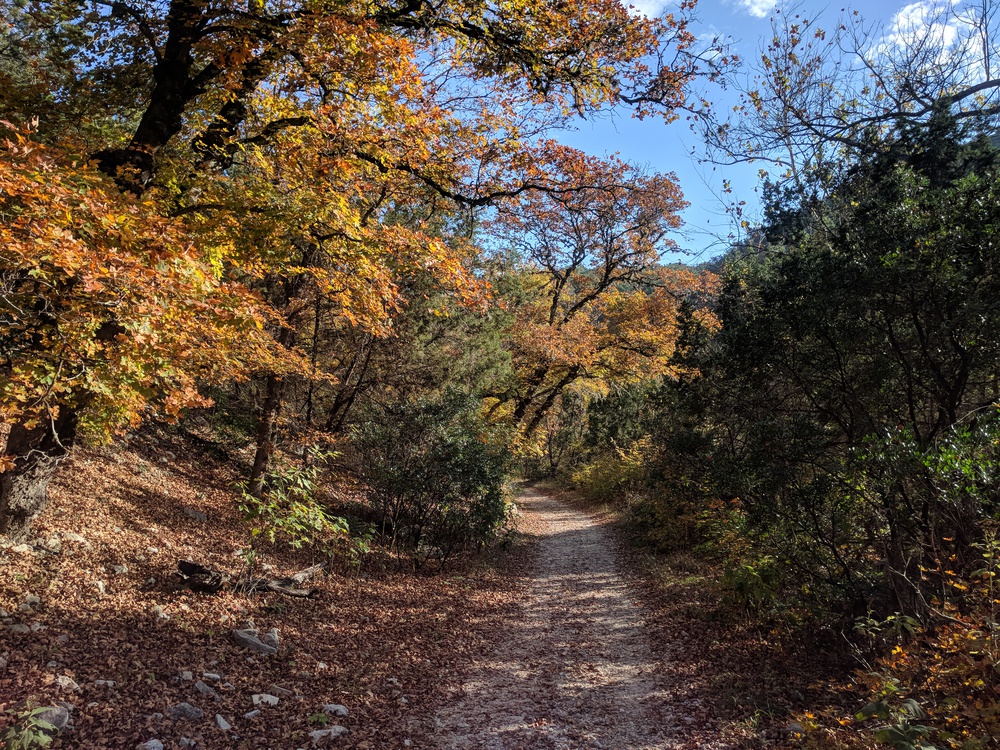 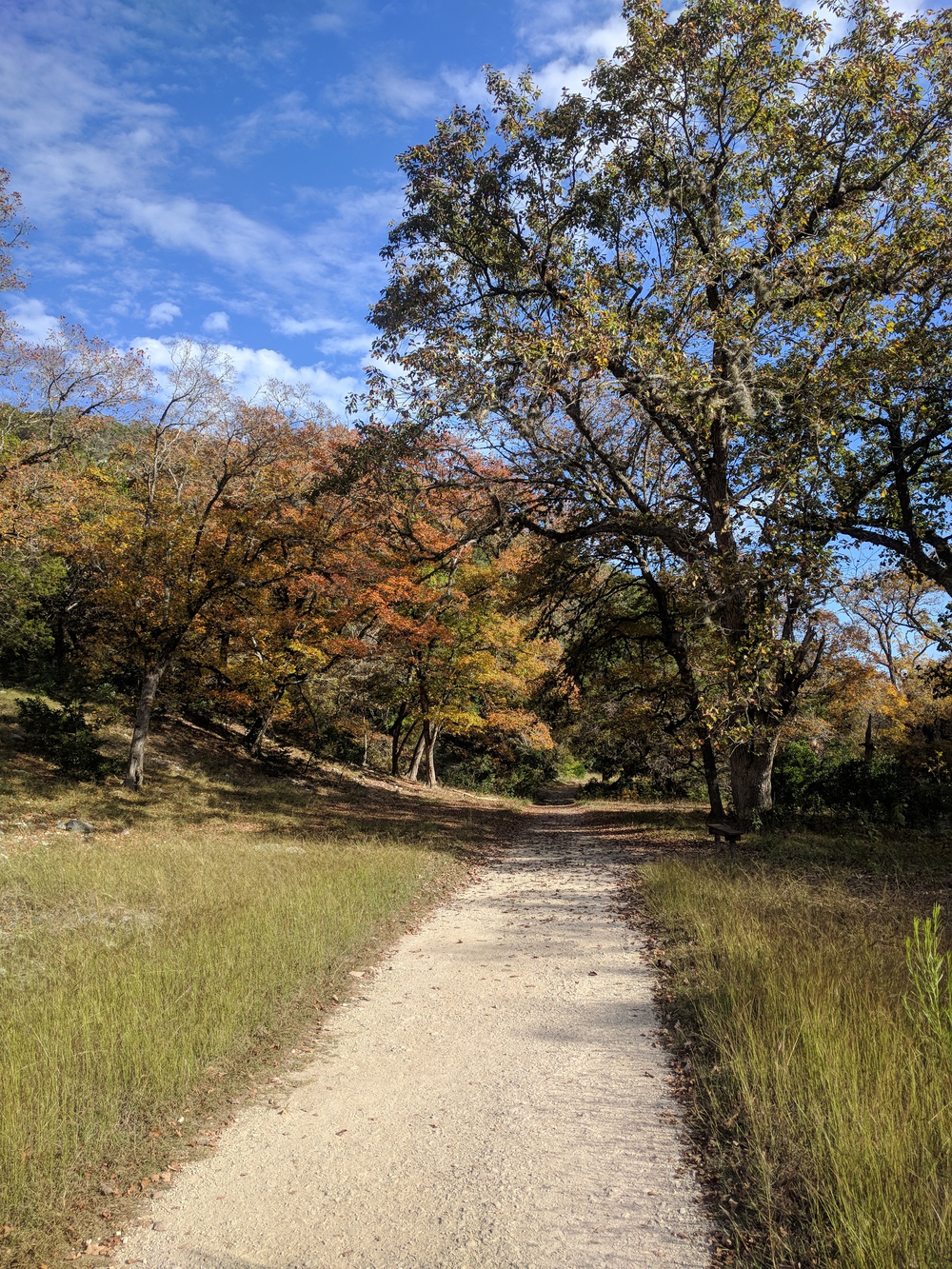 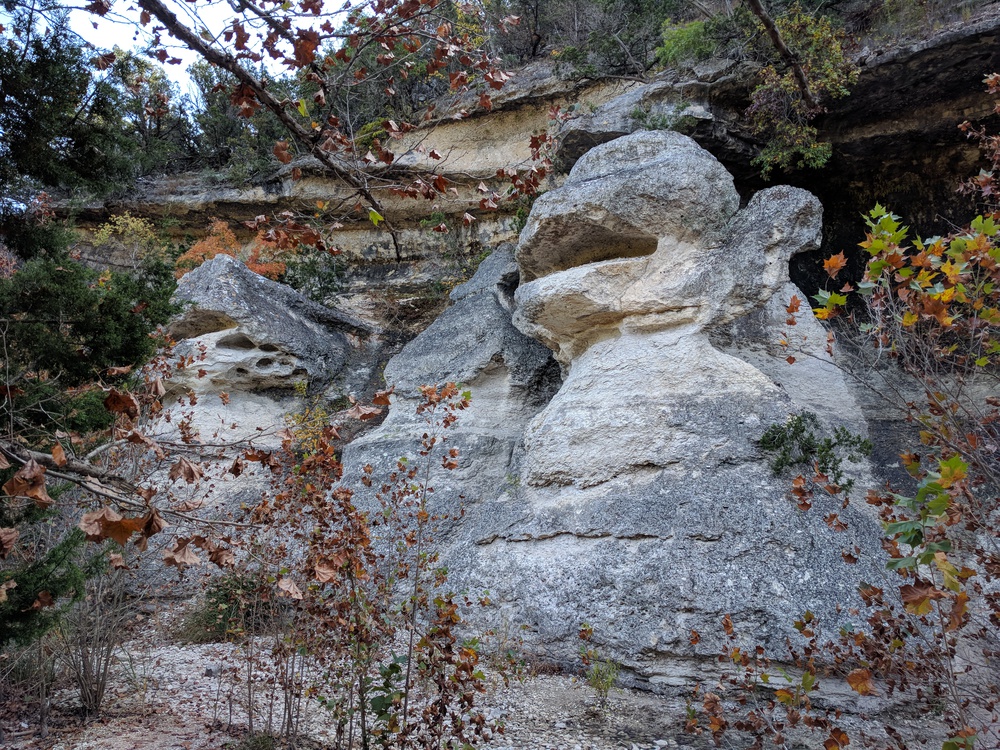 The hike led down a canyon to a primitive campground and a pond that, despite being hot from the hike, looked a little too stagnant to jump into. 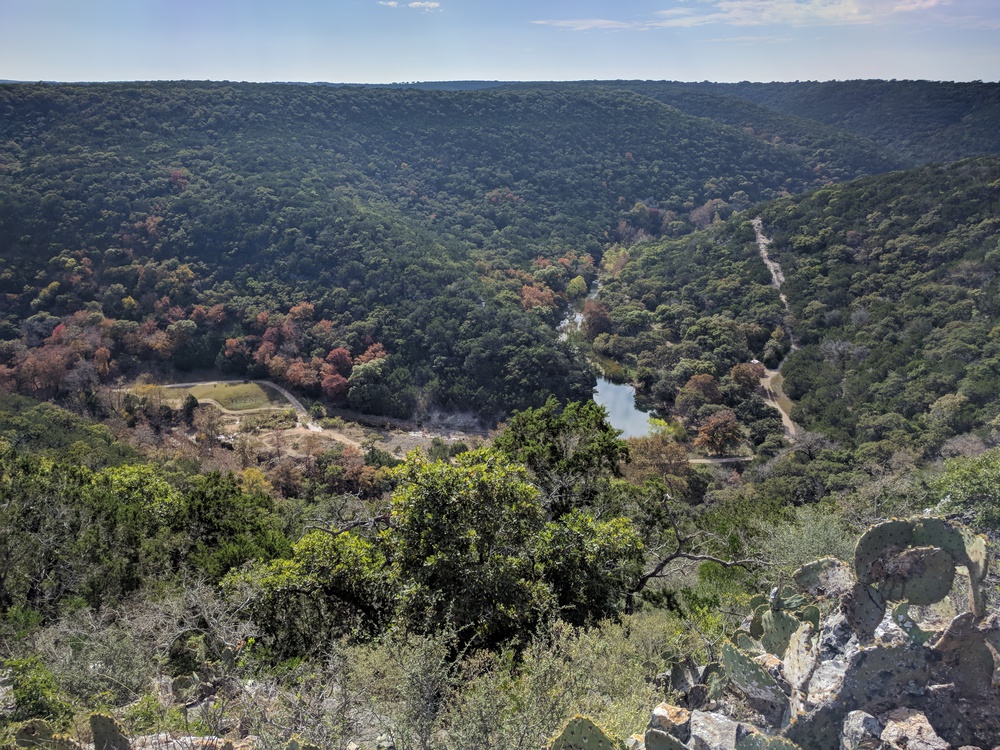 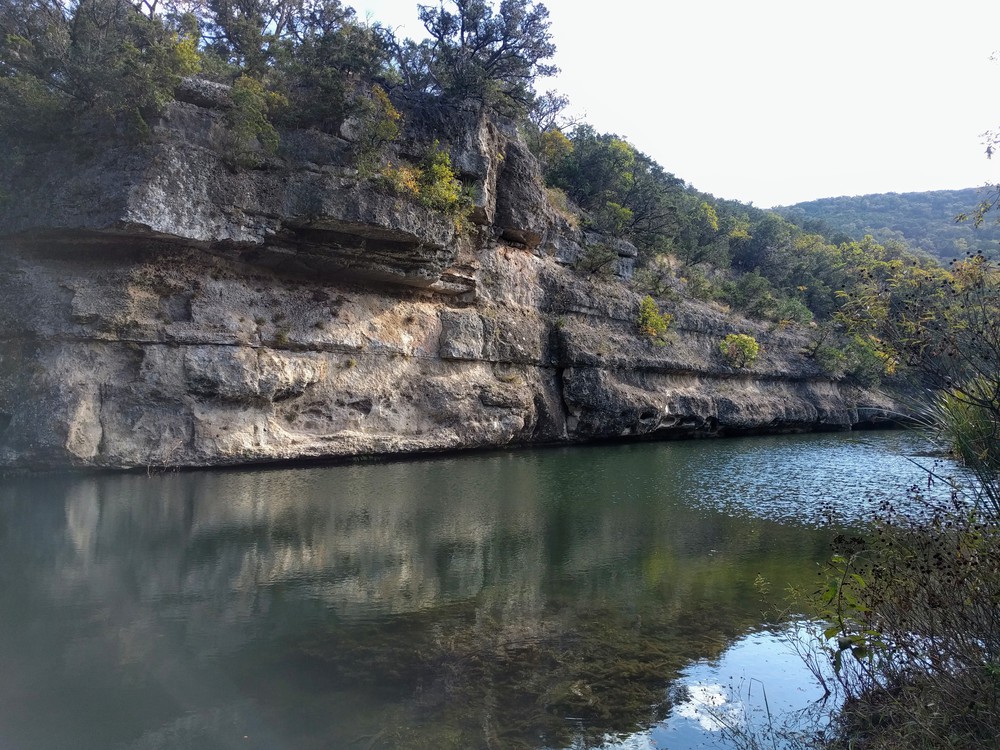 It took one more overnight near Del Rio to get to the outskirts of Big Bend National Park, but we finally pulled into a gas station in the town of Marathon just as our van's odometer rolled over to 5 nines. We filled up the tank and continued through the town watching the gauges expectantly. The fateful moment occurred just in front of an RV park and motel where we would stay for the next 2 nights, waiting out some rainy weather before going into the park. 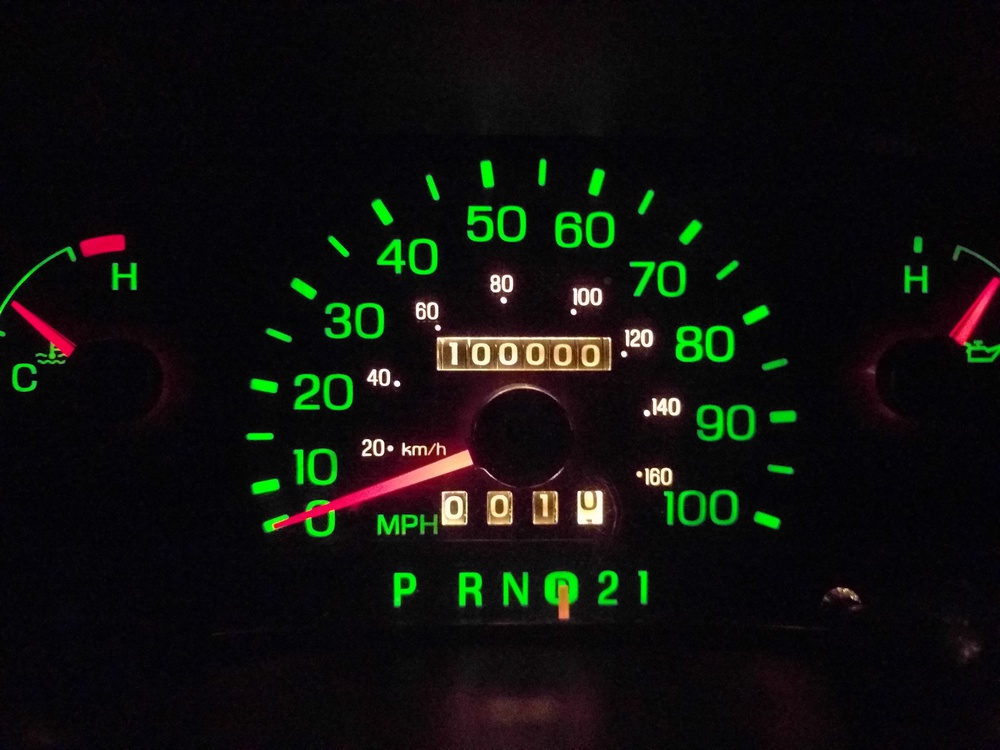 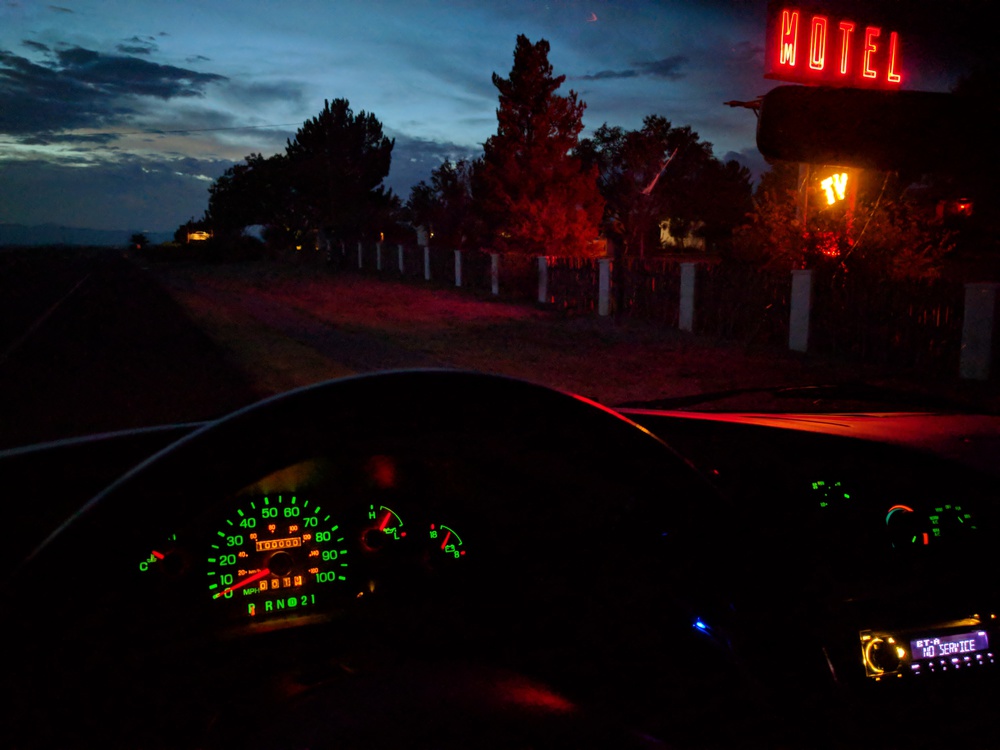 After spending a restful but cabin fever inducing couple days boondocking in the back forty of the RV park, we finally made our way into Big Bend. On our way to the campground we stopped at a fossil exhibit that described the landscape, which was once completely underwater. The mountains here weren't formed by tectonic activity, but by erosion of sediments left hundreds of millions of years ago. The area is rich with dinosaur fossils, including those of an ancient relative of the modern alligator that was as big as a school bus. I repeat: as big as a school bus. See skull on left: 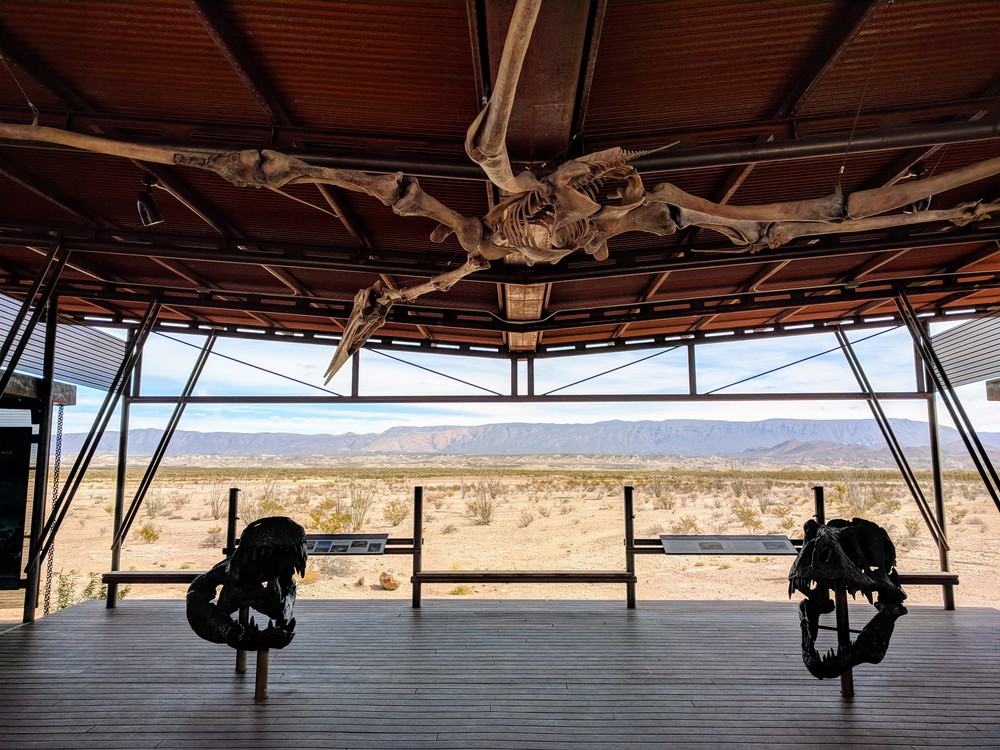 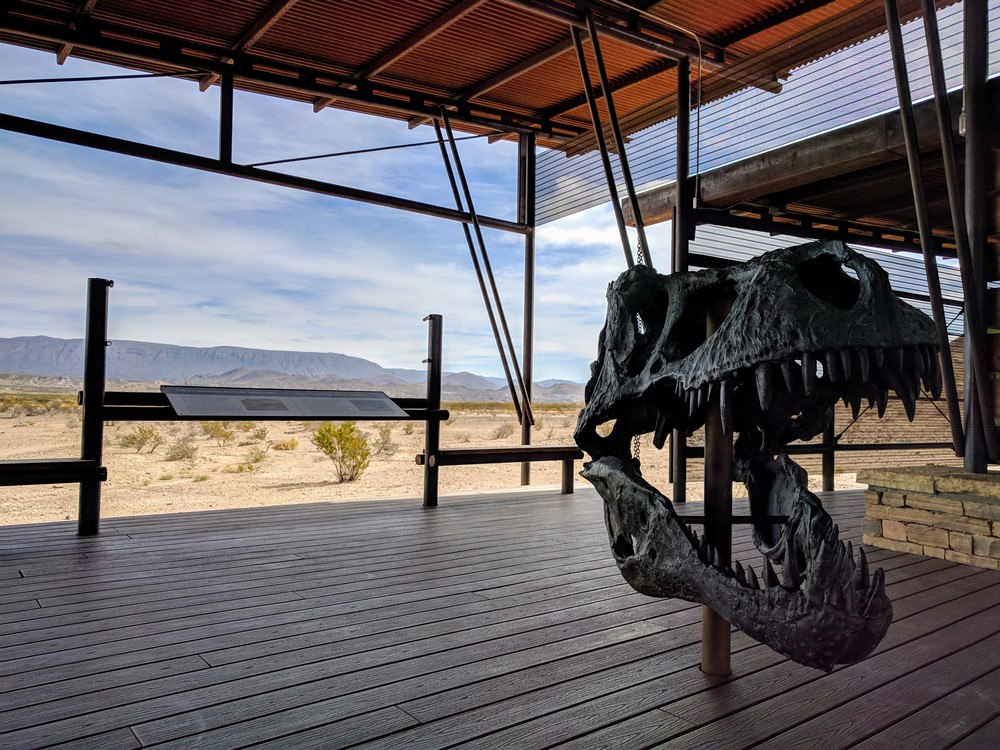 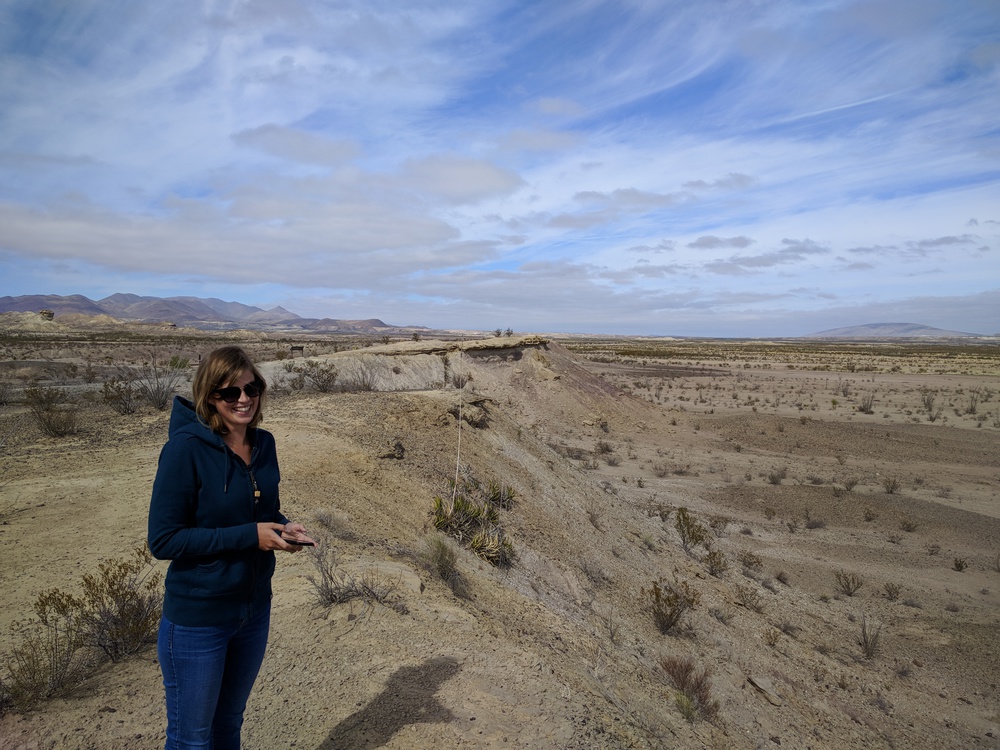 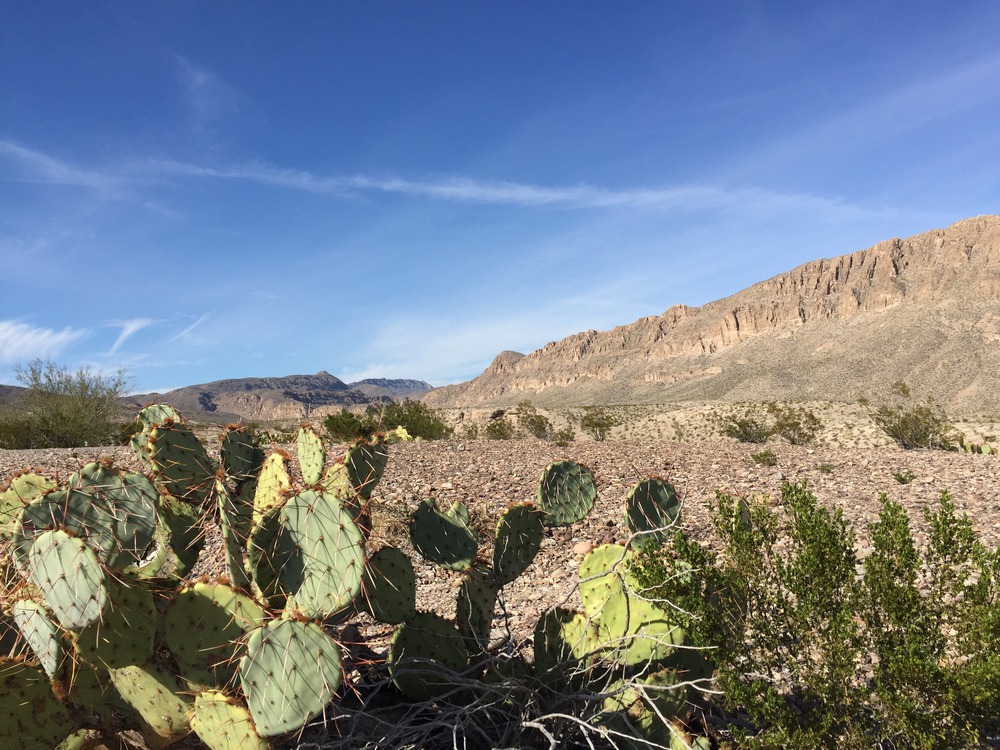 It actually felt nice to get into the desert after being in such humid and swampy conditions for so long. The weather was warm but not too hot and it was generally pretty pleasant to be outside. It was a little puzzling to be so close to Mexico with nothing marking the border but the river. We wondered if people from Mexico ever came across the river, and then we found this display in a gravel pullout:

In the background you can see a canoe on the Mexican side of the river, which was clearly used to ferry over these beaded trinkets, and a plastic container with instructions on how to pay for them. We found out later than anything bought from these displays is considered "contraband" and will be confiscated if border authorities find it. Erosion of the riverbank was cited as a reason why this type of thing is forbidden, which seemed like a bit of stretch to me.

From our campsite we walked a trail to an overlook of the Rio Grande in the evening, then returned to sit outside and watch the rocks turn red as the sun set and the stars came out. 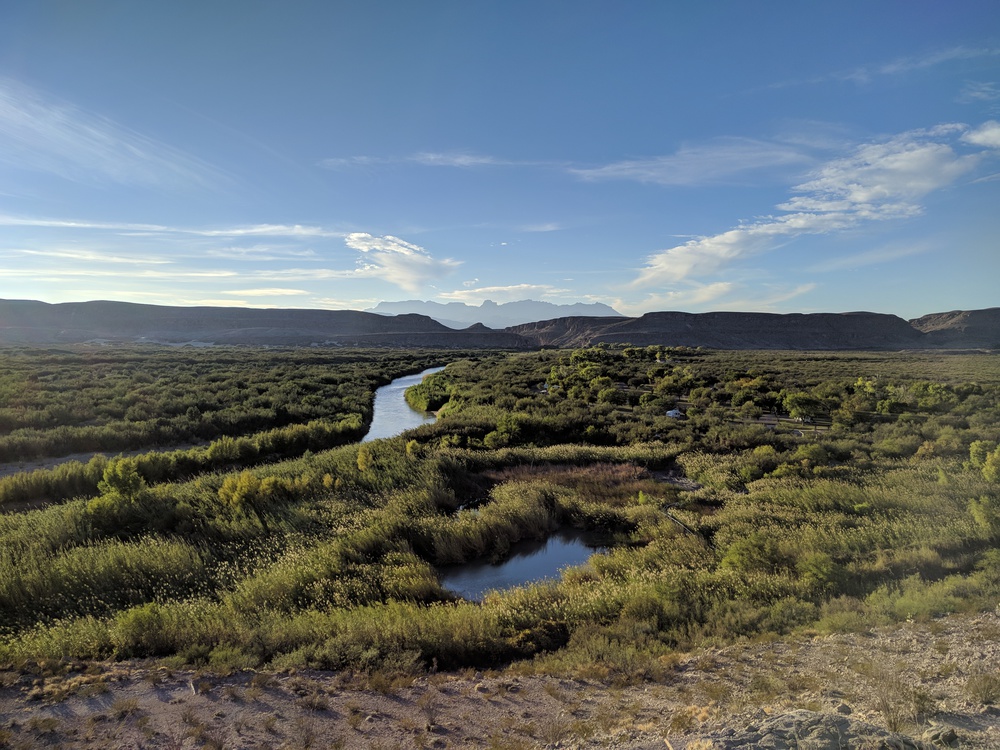 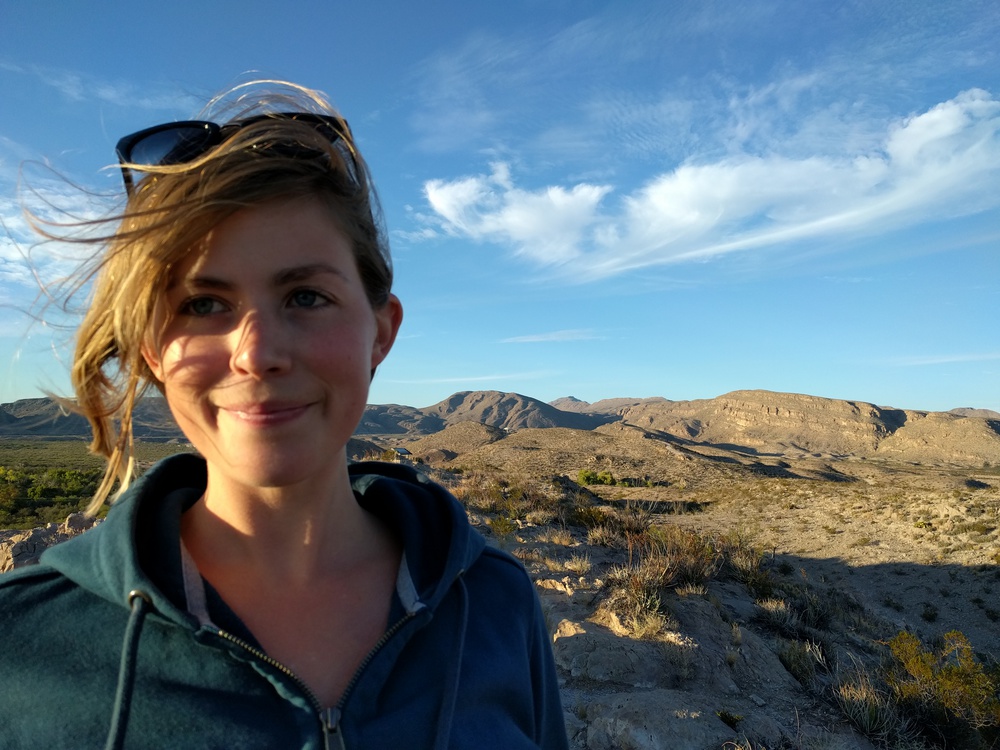 The next day we hiked the Lost Mine trail which we heard about from a stranger we talked to in a pizza place back in Marathon. He told us it was one of the better hikes in the area and would offer great views on only a moderately difficult 5 mile roundtrip hike. 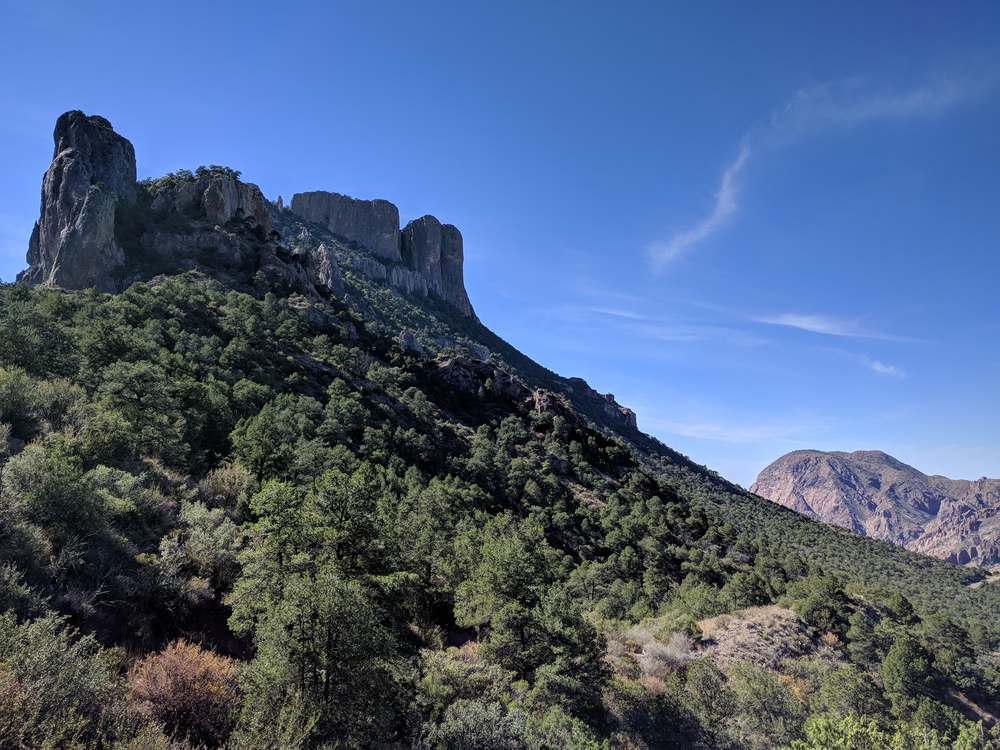 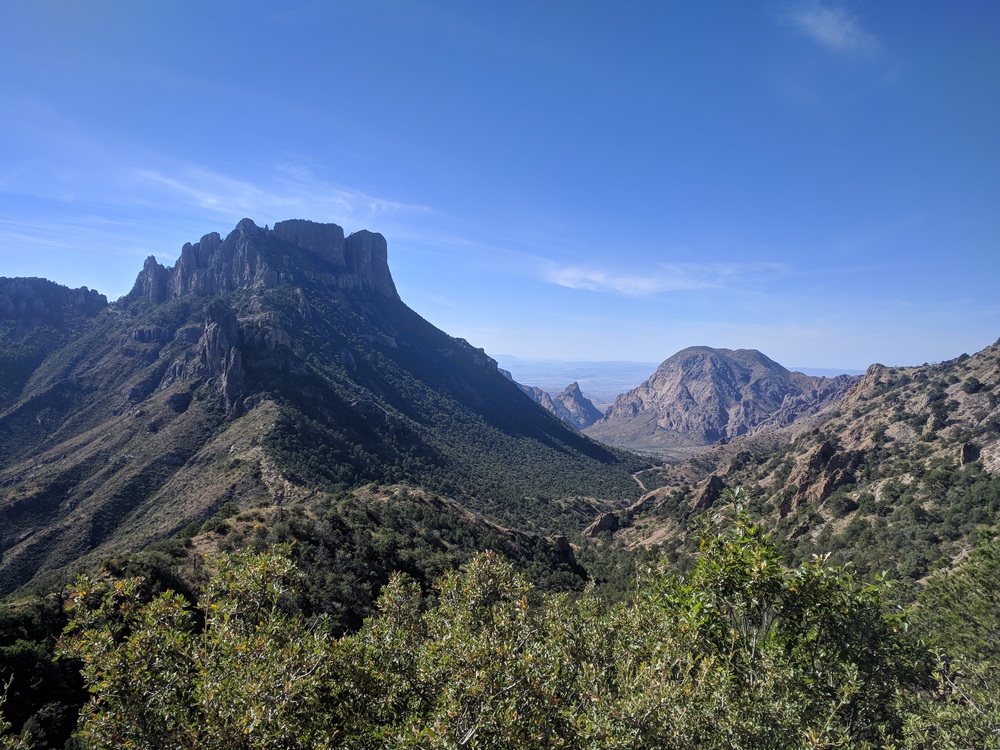 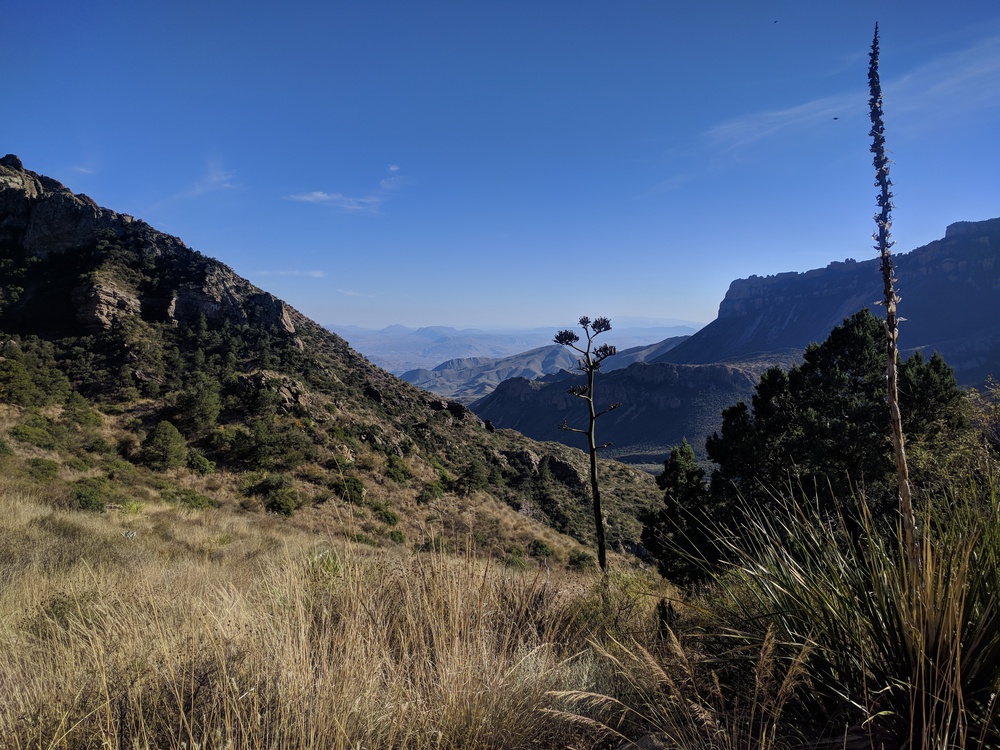 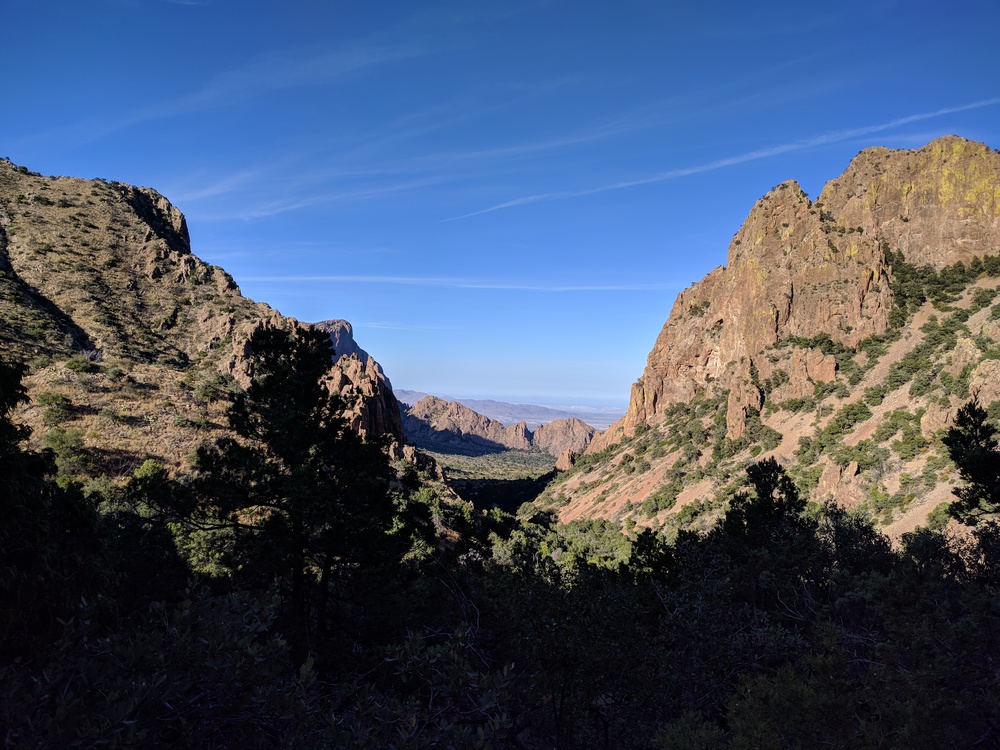 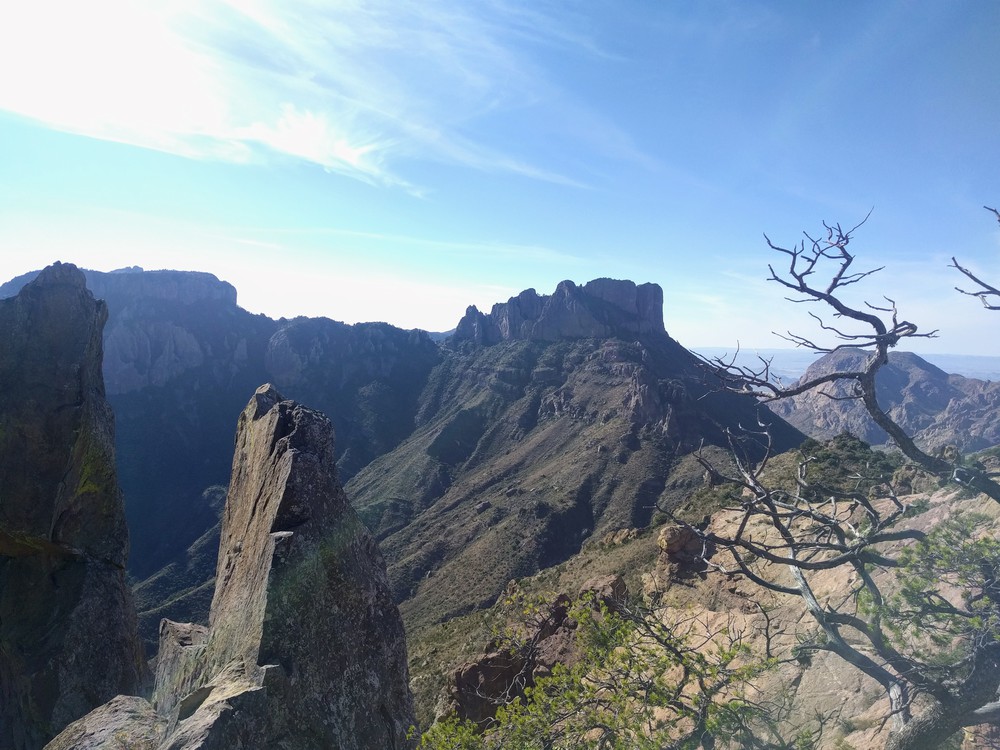 It was a pretty spectacular hike from start to finish. I loved this tree at the top. It looks to me like a bonzai that's been artfully shaped, just standing alone on top of a rocky ridge. 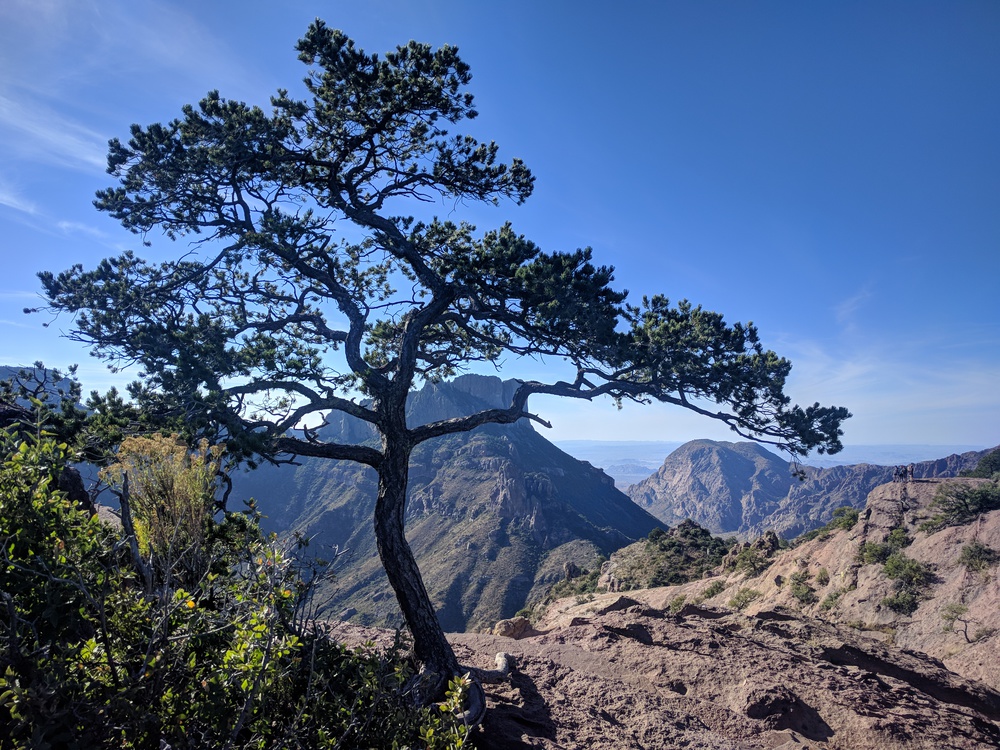 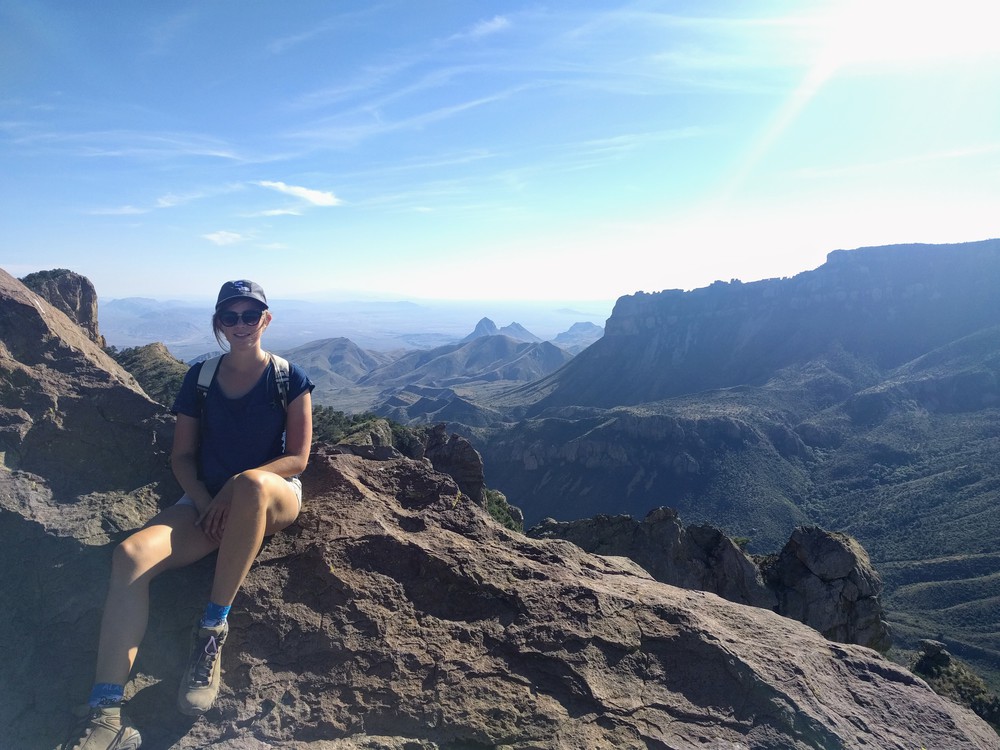 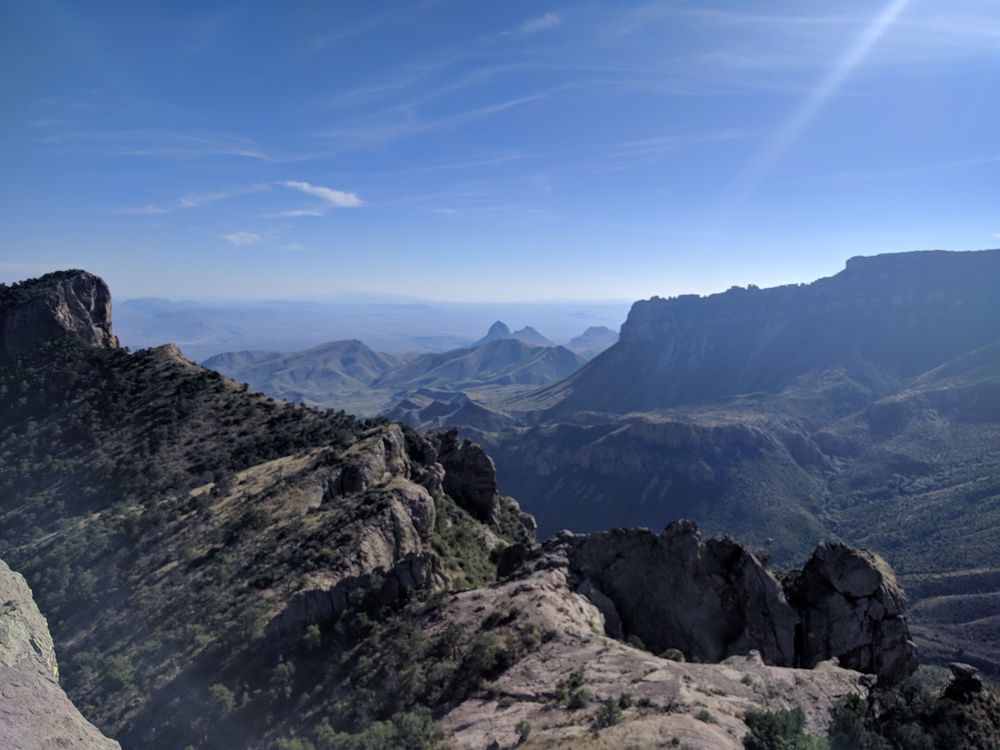 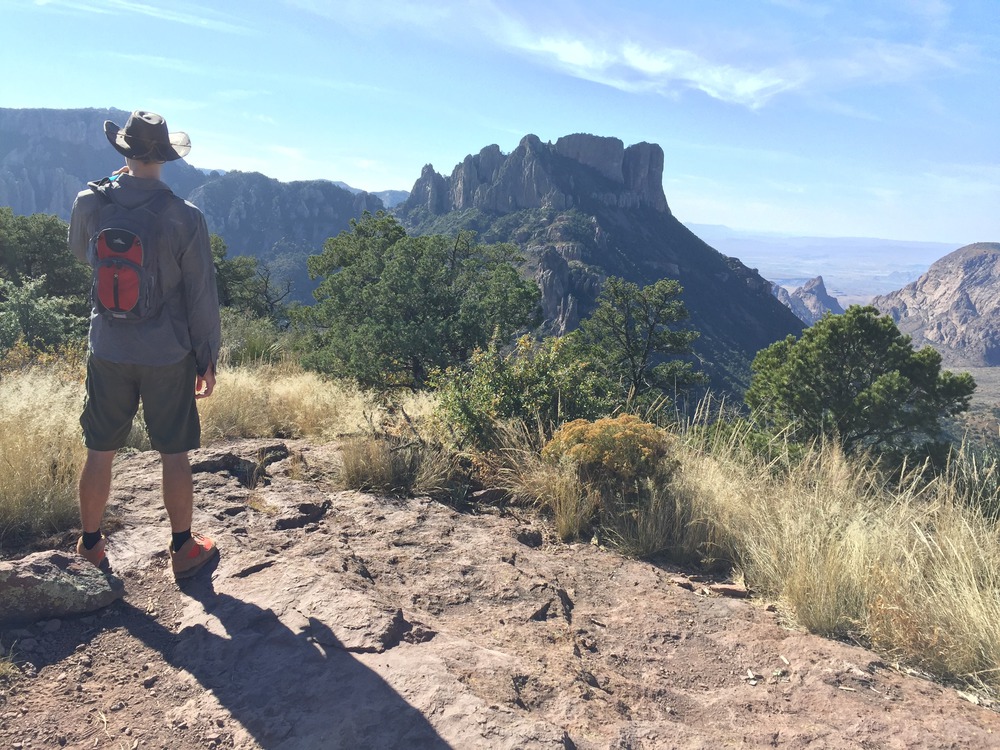 We hiked back down and made our way about 10 miles out of the park, planning to spend the night somewhere in the small town of Terlingua, hoping for a free parking place for the night. The next day we'd come back into the other side of the park for another hike.

We only set aside two days for this visit but you could easily spend a week or more here and not see everything. Geographically it's a huge park and there are trails and side roads everywhere to explore. Many of them require a high-clearance 4 wheel drive vehicle though, so if you really wanted to see the place you'd need a different setup than we currently have.

Off to Terlingua for a good meal and some semblance of civilization before exploring more desert landscape tomorrow. 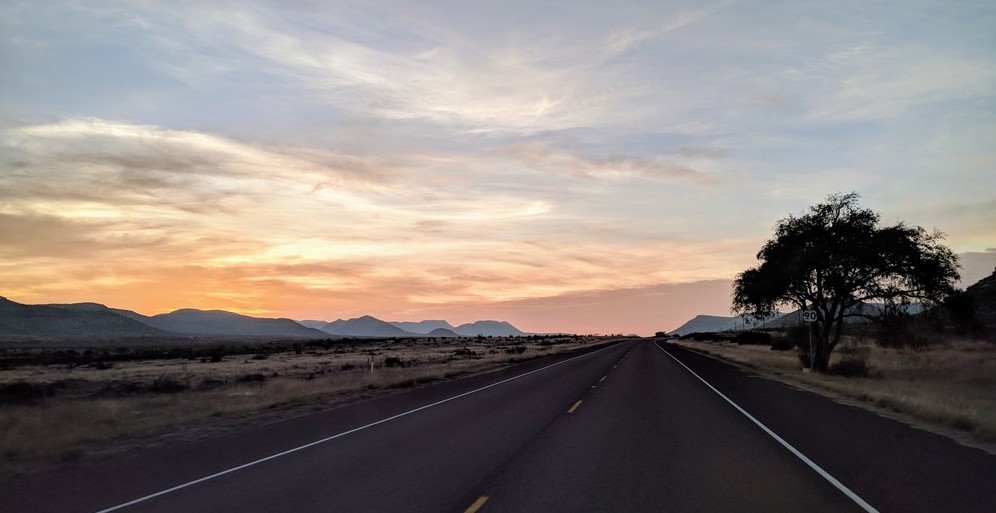 Next:  Terlingua, and Big Bend Part 2