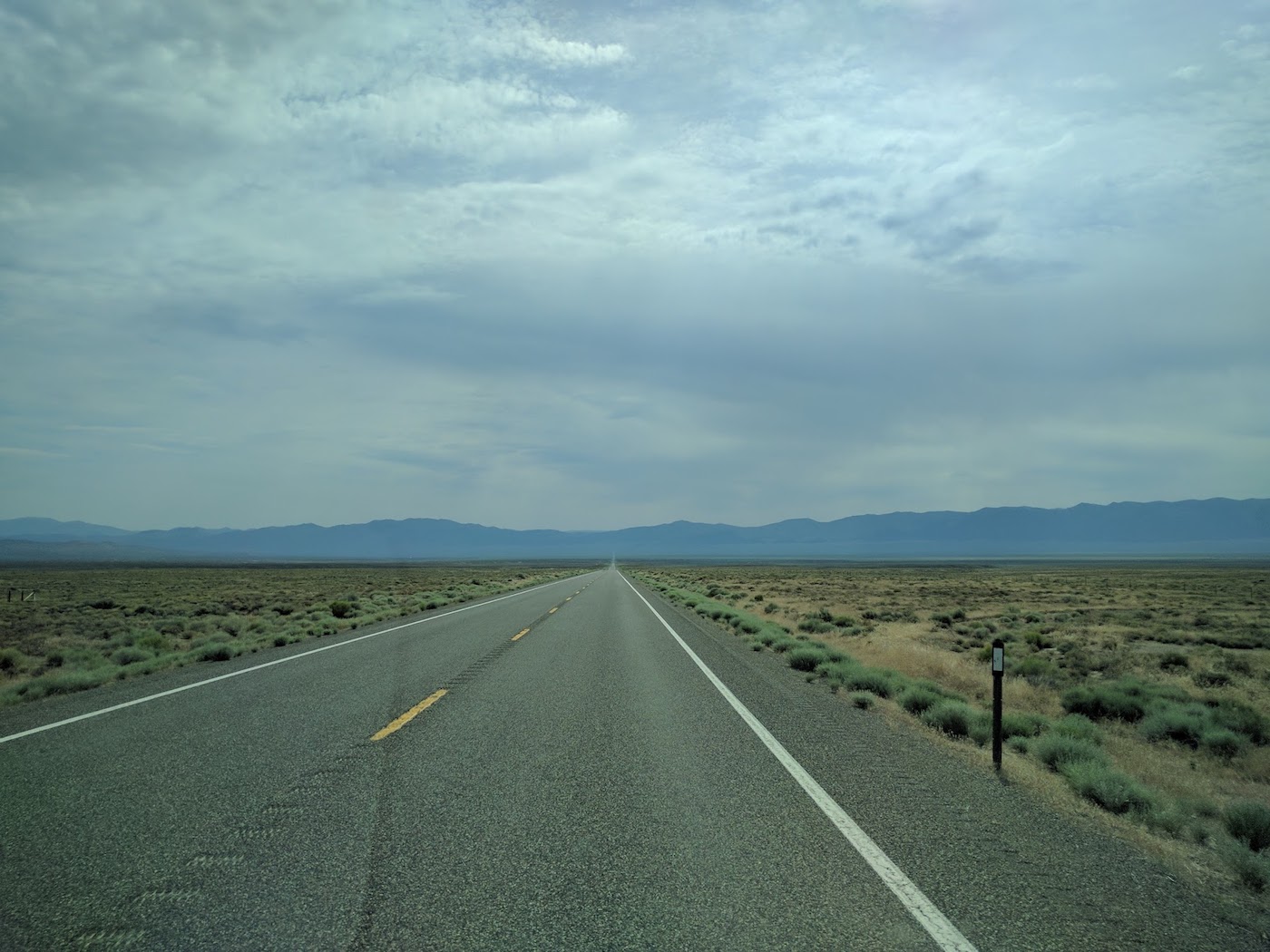 Nevada's border claims approximately the Eastern third of Lake Tahoe, so as we drove around the lake we entered and left Nevada at least once. It's strange because being in Lake Tahoe doesn't feel much like being in Nevada, which is to say there was too much water and greenery and not enough sand or gambling.

From Lake Tahoe we drove straight to Reno, where we had a luxurious driveway to park in, courtesy of a user on the Boondocker's Welcome website. We decided to skip Vegas this time around, simply because it was too hard to justify driving further South in the desert when it was already 100°F where we were staying. Rosie has never been though, so Vegas has been added to ever-growing "we'll hit that on the way back" list.

We didn't spend much time in Reno, just long enough to plan our next leg, do some laundry, and check out the generator - a community art space that's used to create a lot of structures that end up at Burning Man. We met a few people here who were happy to show us around their well-equipped shop and tell us about what they were working on. Here's a picture of an in-progress giant chicken that is someone's long time wish finally becoming a reality, some incredibly complex twisted wood structures, and a glimpse of the well-known art car "Clock Ship Tere": 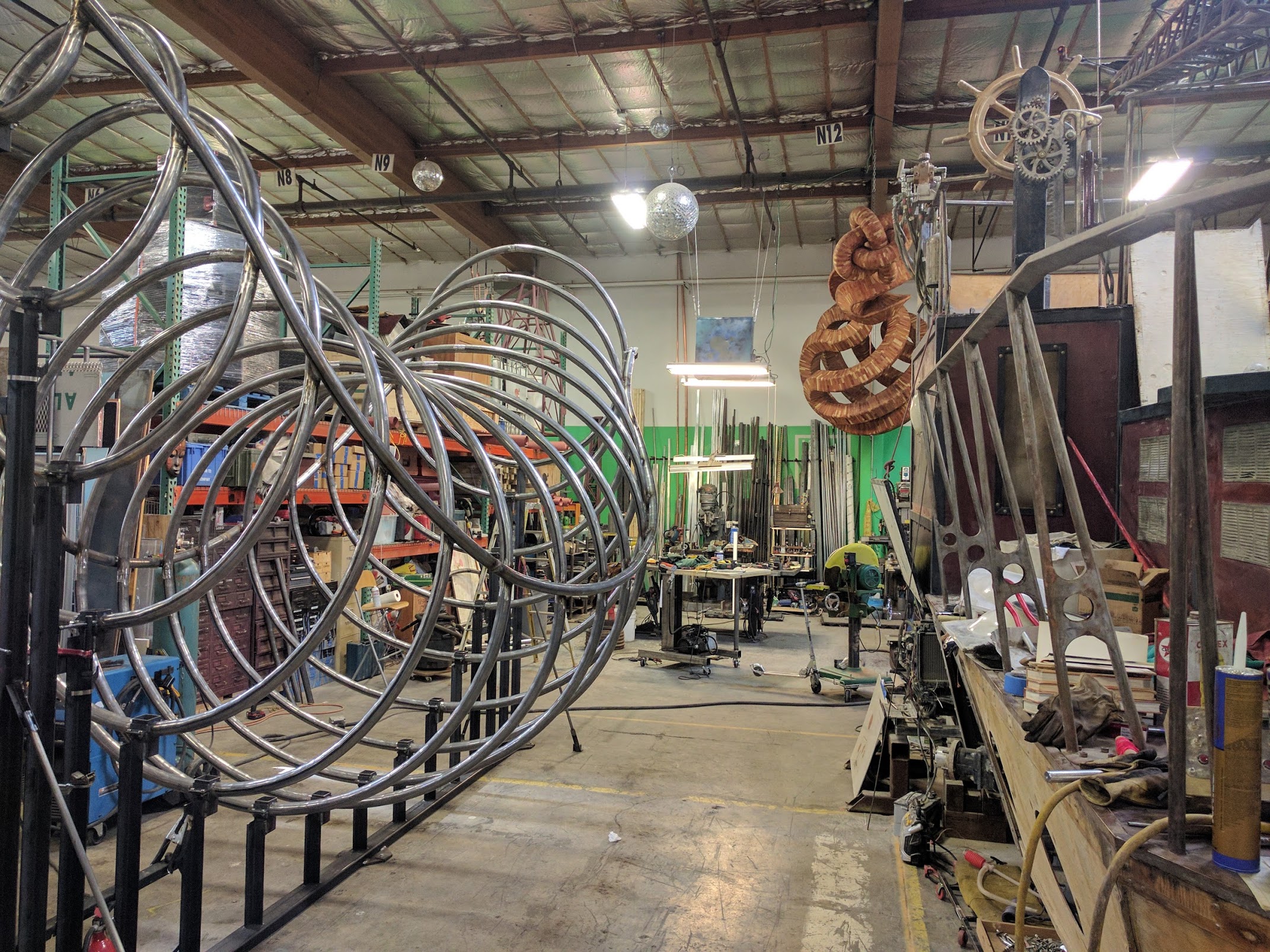 And here's a much more exciting photo of the clock ship in action some previous year on the playa, from its Facebook page: 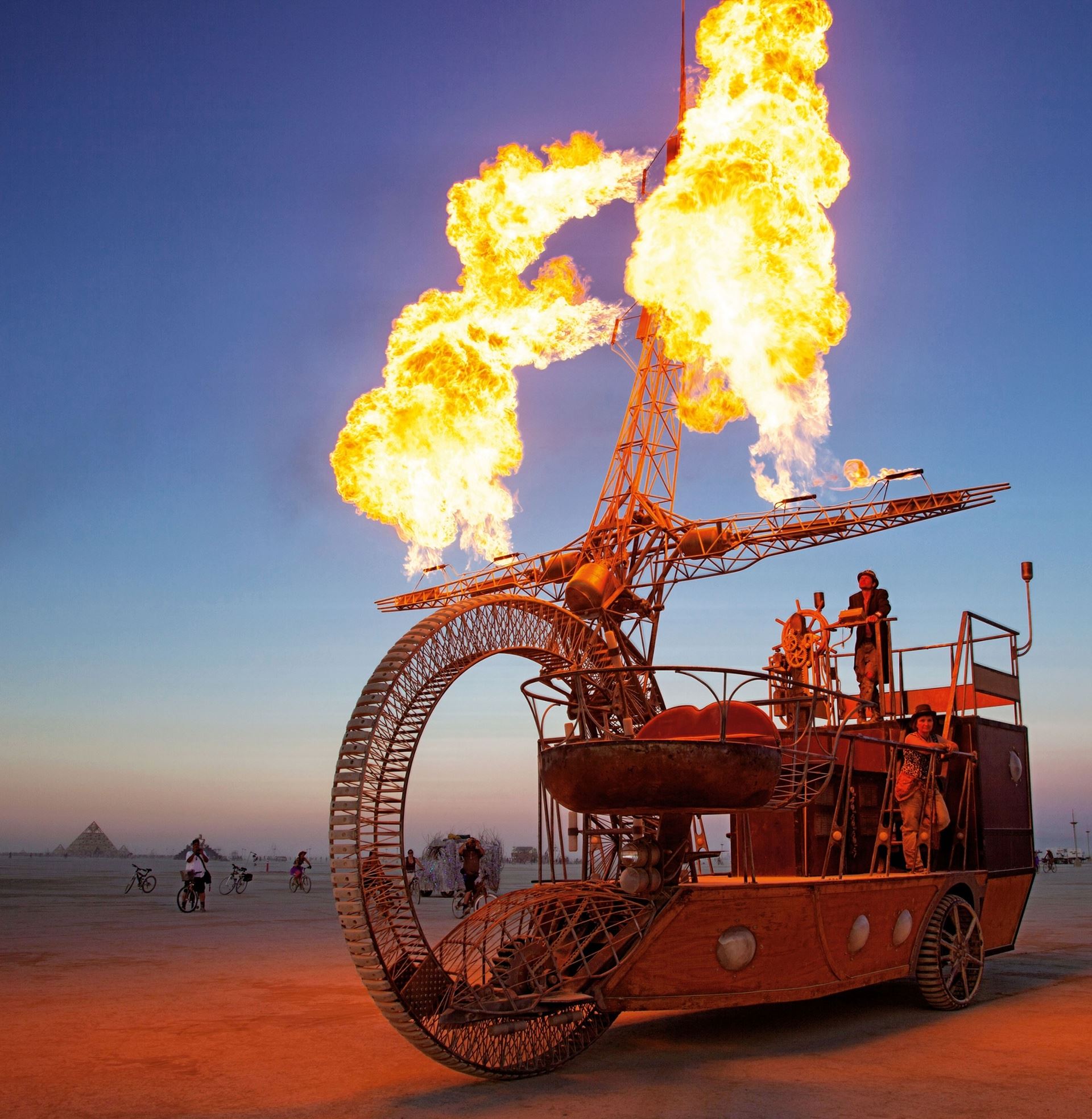 Andy Tibbetts, the car's creator, told us about the process and the years of work that went into creating it. The metal fabrication was impressive, especially the massive gear that drives the front wheel. He was in the process of replacing the wooden slats that act as tread for the front wheel as they had started to wear down from use. The whole structure is powered (slowly) by a 27hp two-cylinder Kawasaki engine from a riding lawnmower.

We didn't stick around in Reno for any gambling, instead opting to jump straight to the sand portion of our Nevada visit. We started East on Highway 50 which runs through the center of the state and is known as "The Loneliest Road in America" after a disparaging article that Life magazine published in the 80s about the road. The small towns and businesses along the route decided to embrace the title. 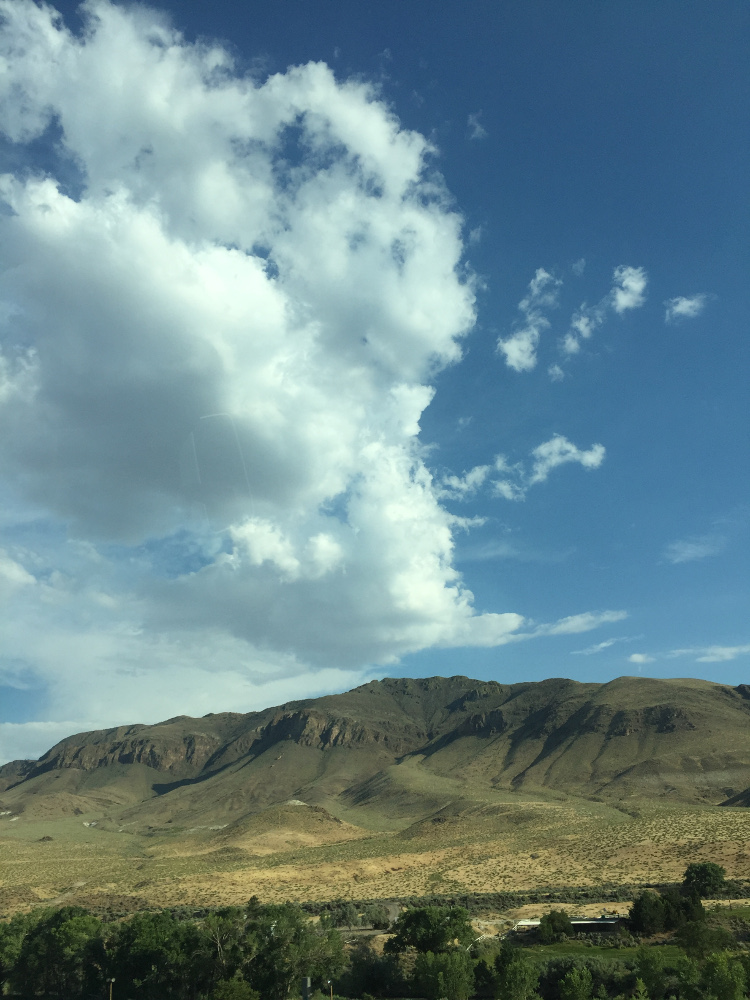 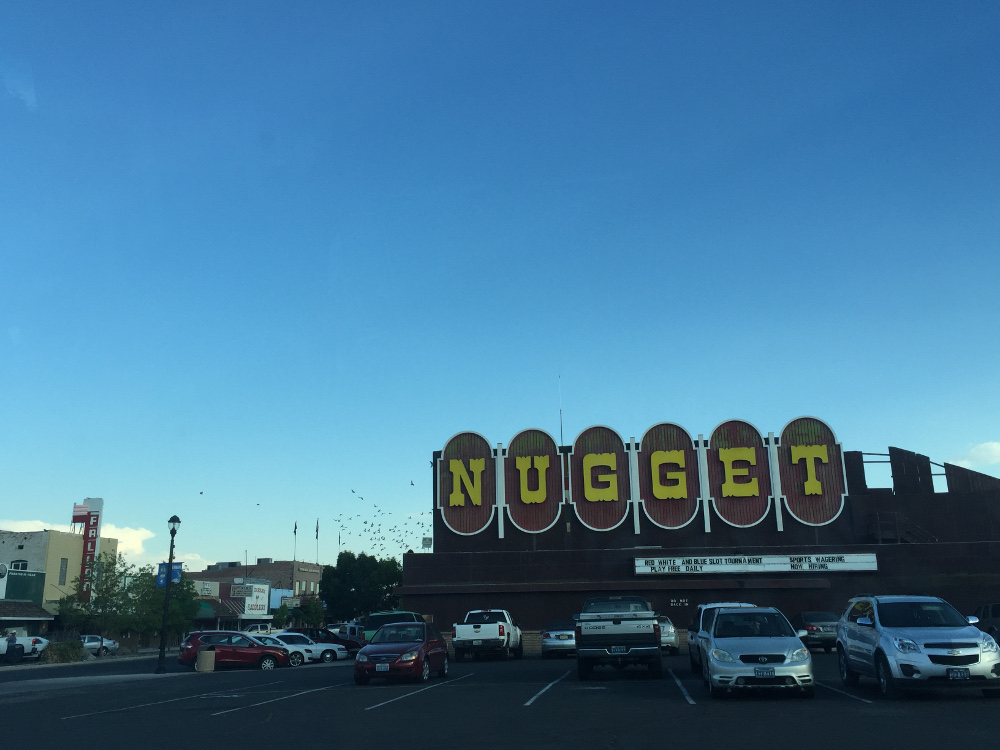 One of our first stops en route was Sand Mountain, a sand dune that stands out from the rest of the Nevada landscape and is made from sand that has certain properties that allegedly cause some sand dunes to emit a "booming" sound in the wind. We didn't really hear this booming despite plenty of wind but it was worth taking a look at anyway as the sun set. 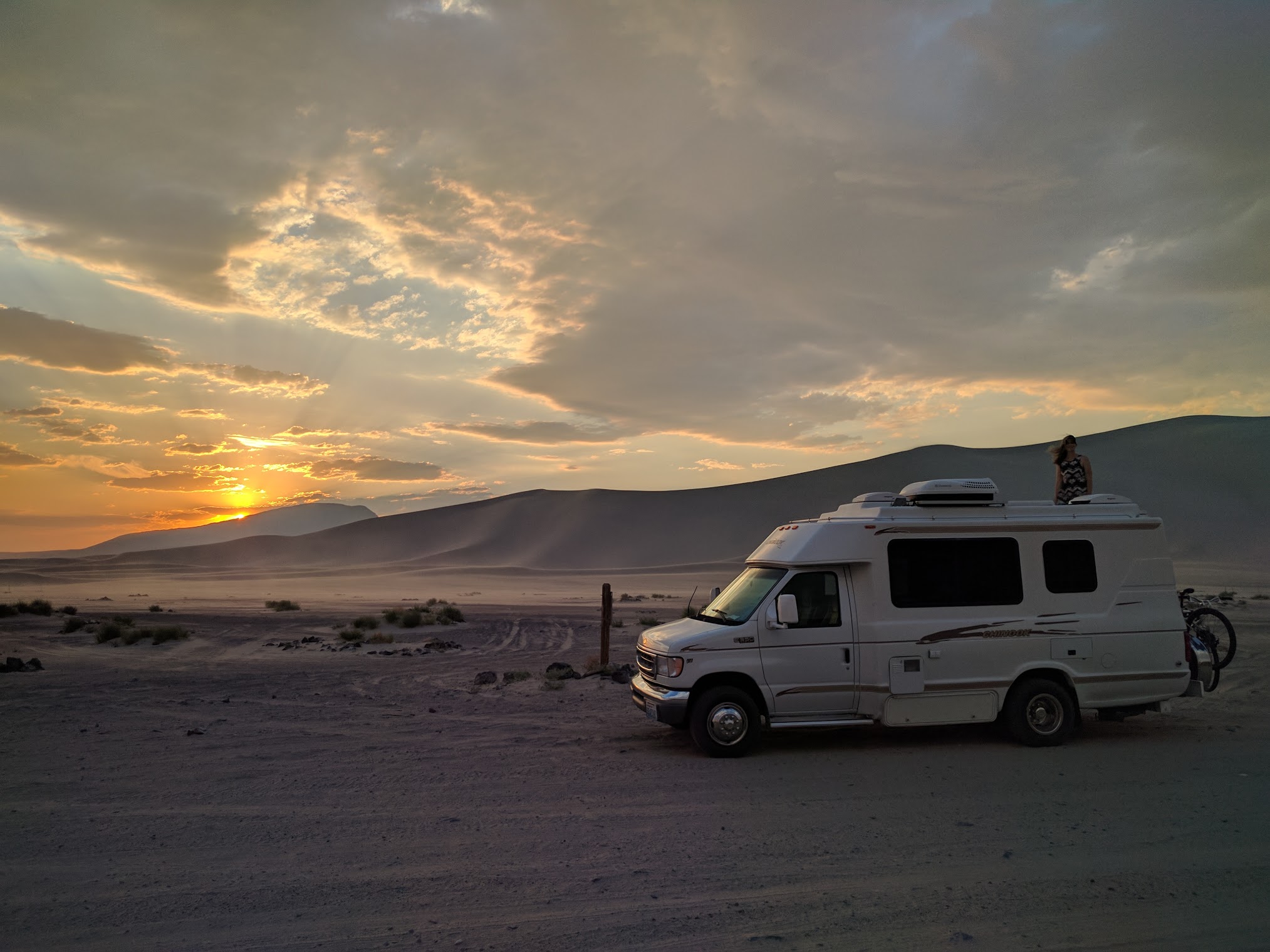 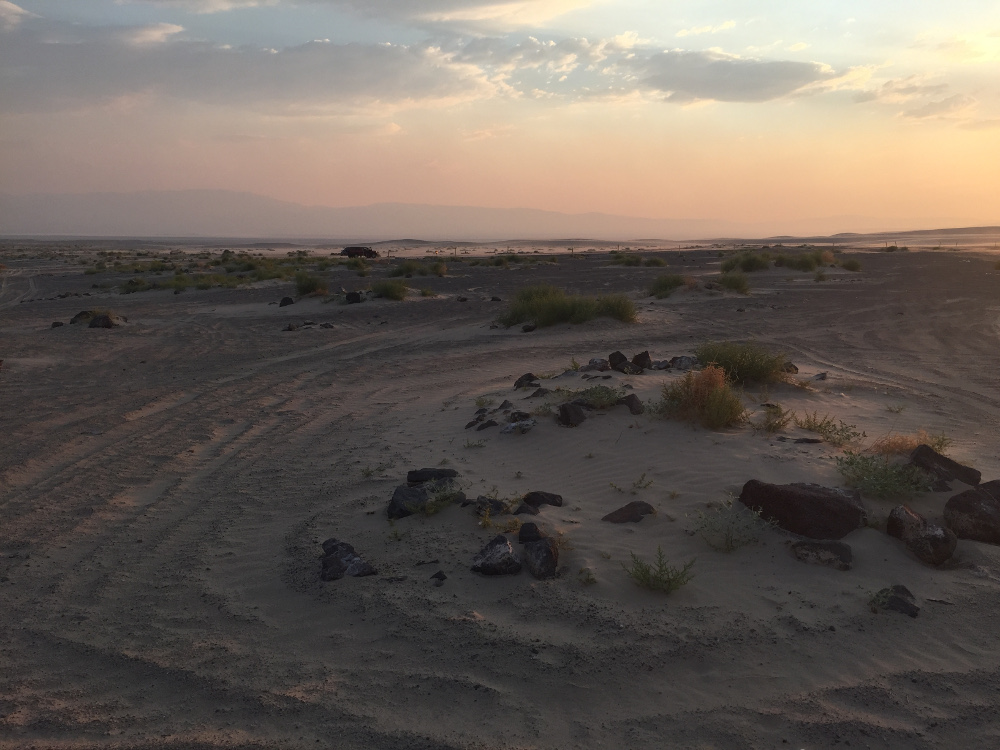 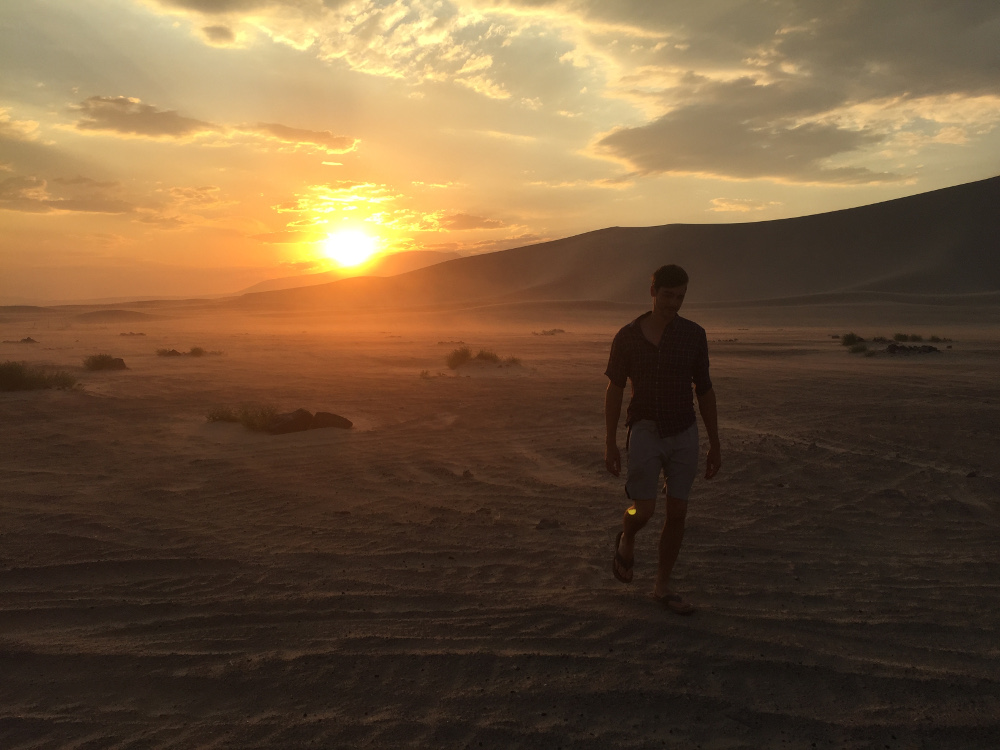 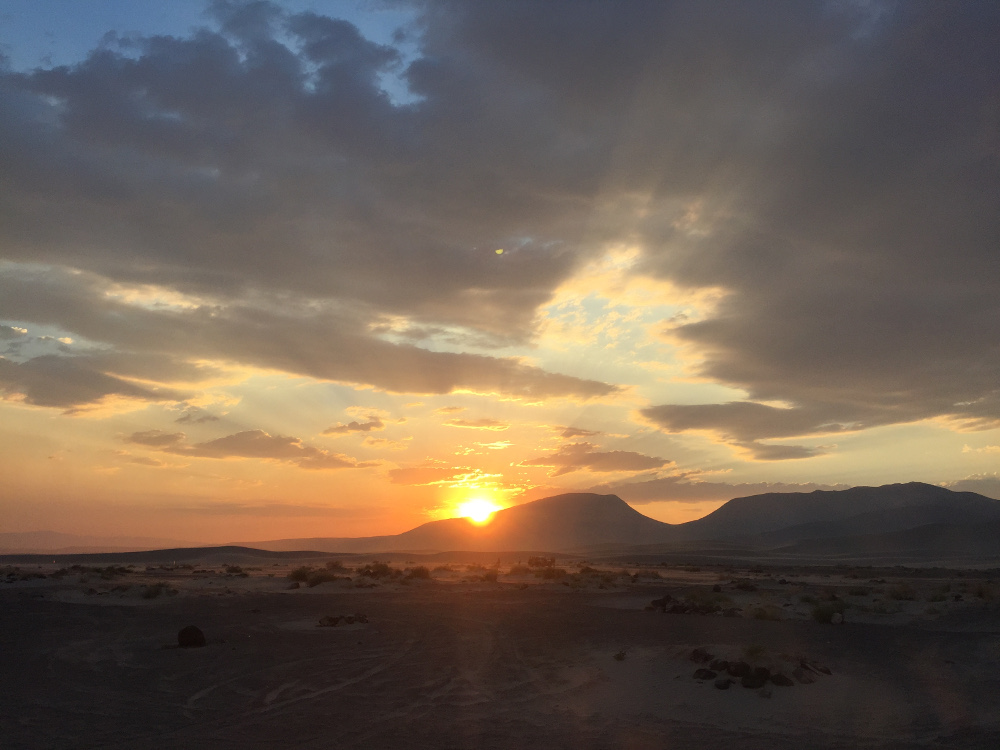 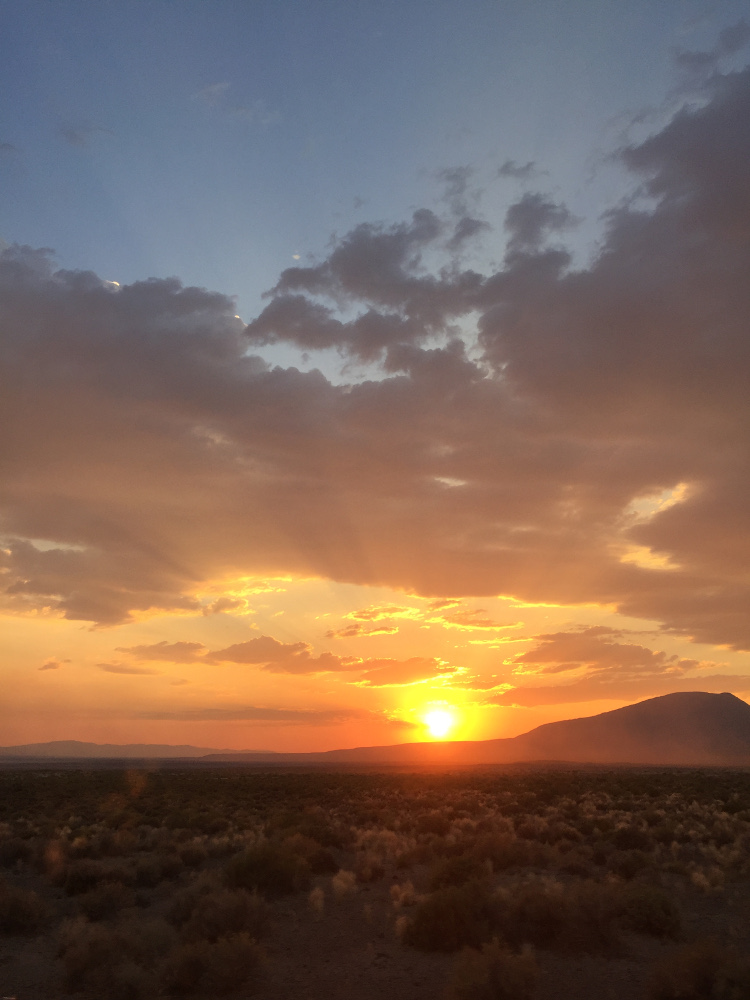 We drove on as darkness set in and eventually ran into the source of a smoky smell we had been noticing for a good number of hours. The loneliest road was closed due to a nearby fire, and was going to remain that way all night. A few miles back we had driven past an unlikely oasis out in the distance in the form of a red neon bar sign, so we decided we'd have to stop in and see if they would mind a van sitting outside overnight. 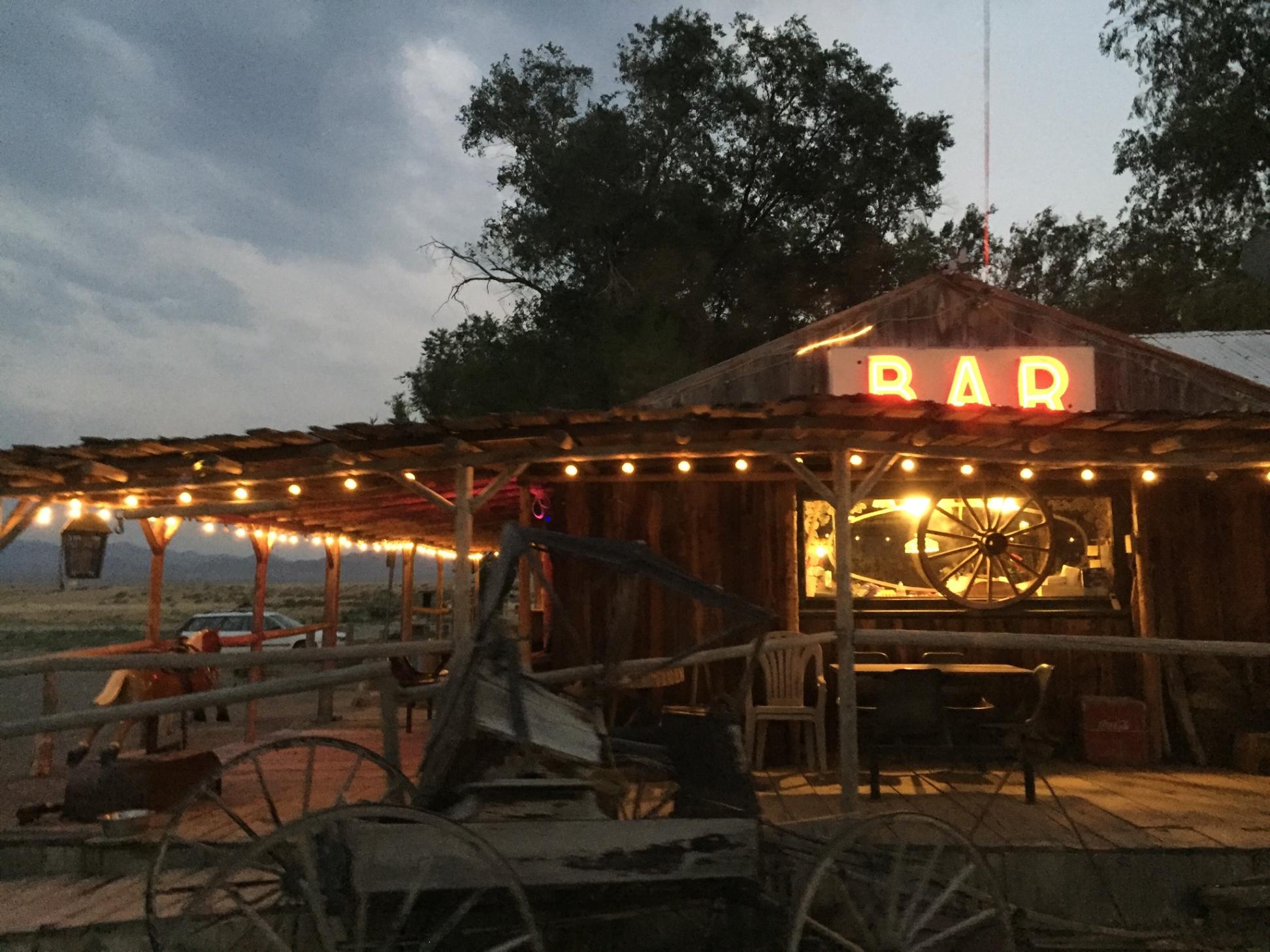 ![](/content/images/2017/07/middlegate-pop-1.jpg)
The place is called Middlegate station, and they didn't mind us parking overnight at all. They had plenty of whisky and cold beer and the place was nearly empty because of the road closure except for two other stragglers and a few of the local residents of whom there are precious few, if their sign is to be believed. It seemed about right.

Despite the small crowd we were treated to live renditions Hank Williams, Willie Nelson, Roy Orbison (by request) and plenty more. I also caught this nugget of sage advice from Russ the singin' bartender: "Only smoke grass if you have nothing pending of importance". Good call, Russ. It didn't seem like anyone in Middlegate Station had anything on the docket. 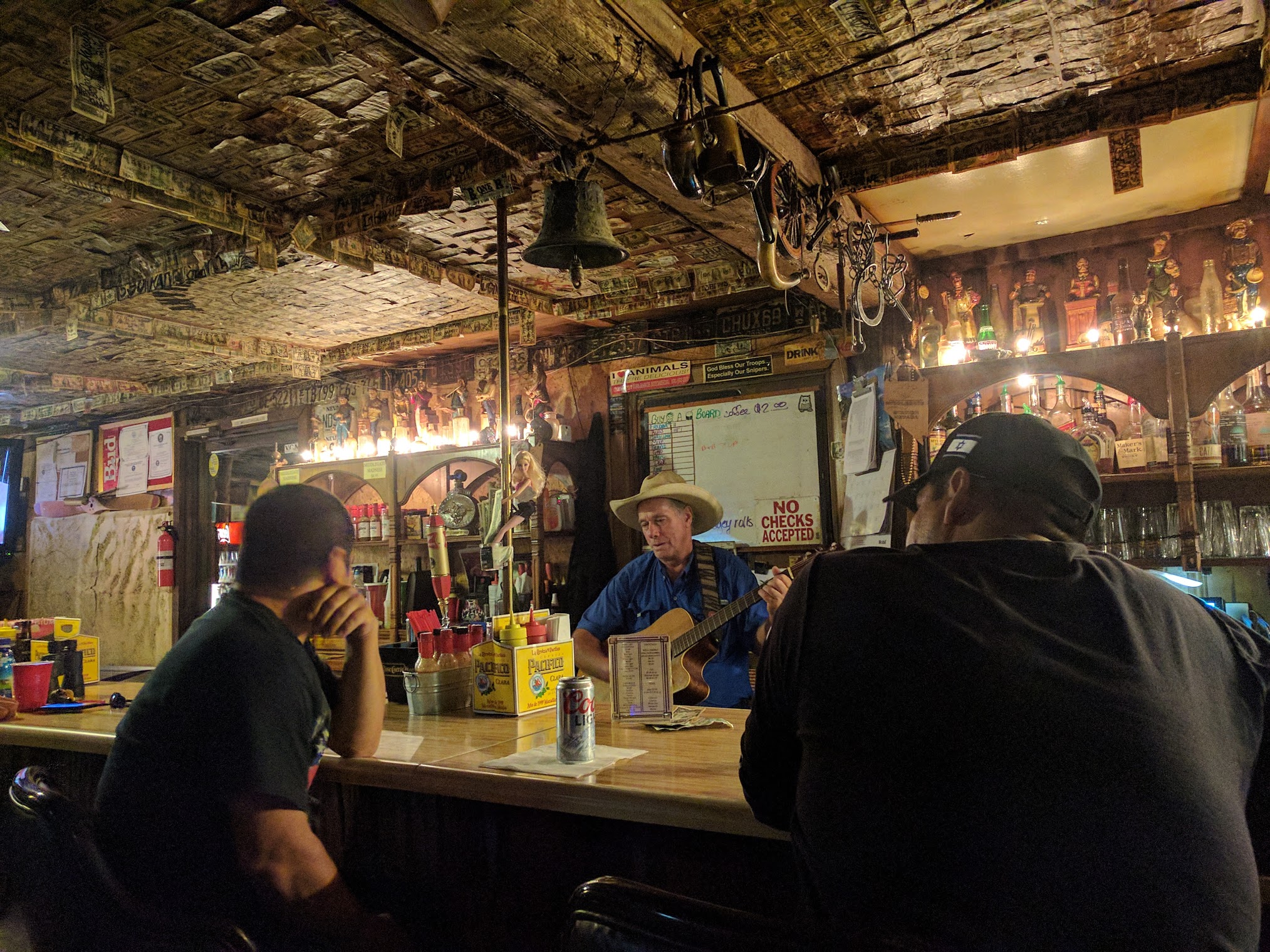 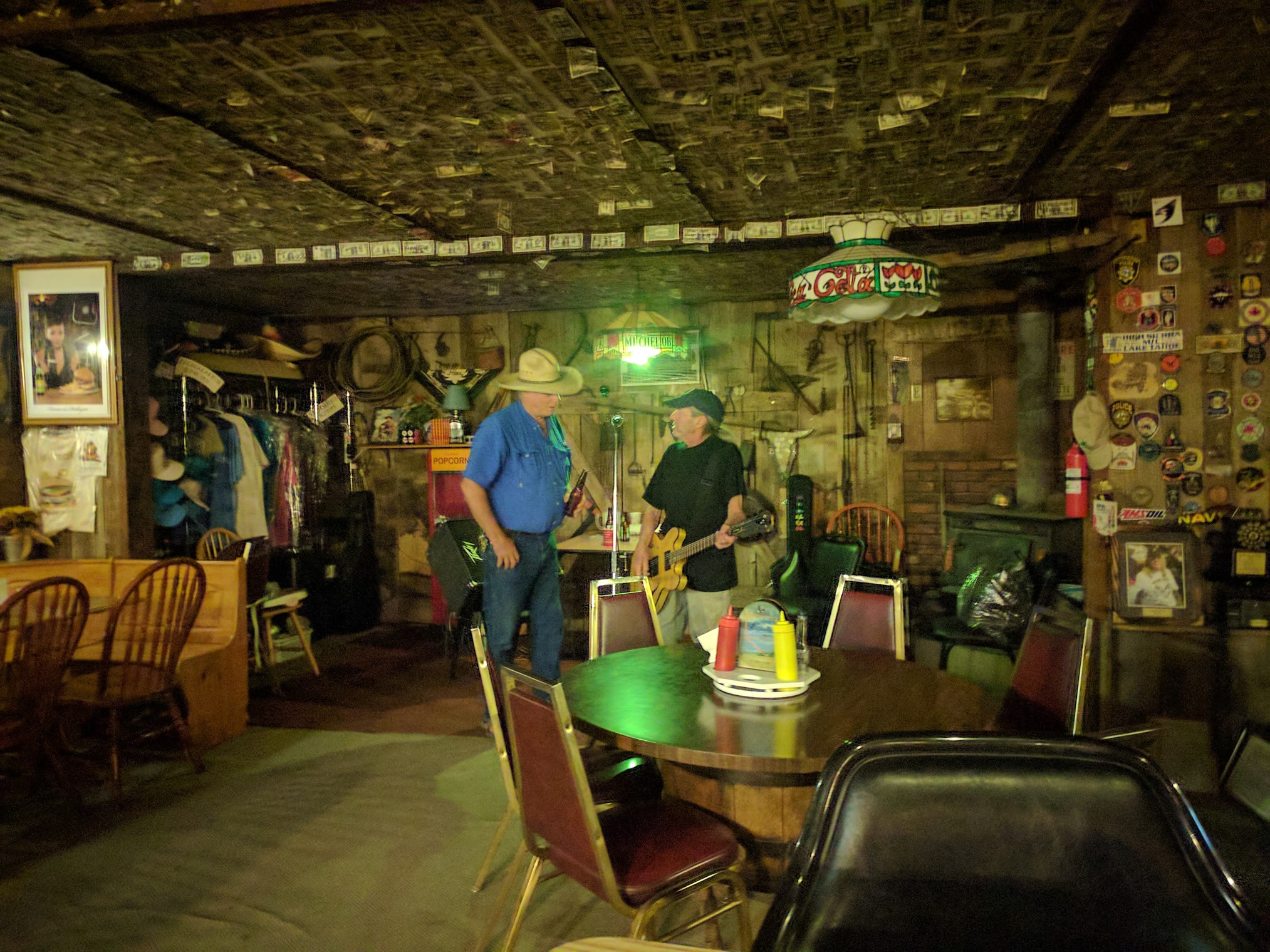 The entire night was very unexpected and surreal. I learned that the surprising red neon shining out there in the middle of nowhere along with every other light in the place, is lit by a diesel generator that burns about 60 gallons a day to provide for the little town in the desert. They take a lot of pride in being a welcoming oasis in a barren landscape and I think they've earned their reputation.

Next:  Eastern Nevada and the Great Basin