We hadn't really intended to go to Sedona but since it was on the way we decided to stop over on the way up to the Grand Canyon. 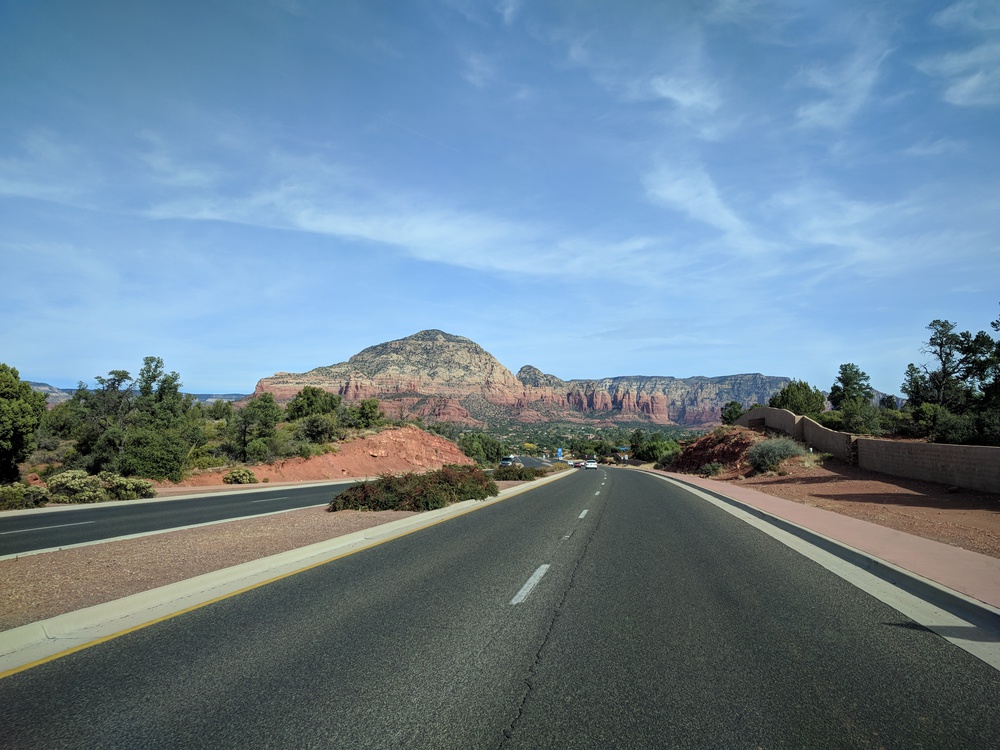 After loading up on groceries at Safeway, and an extended conversation with vanlife guys in the parking lot (two guys who had met on the road, one from France and one from Tennessee, who had been traveling together the last couple of months), we drove out to a nearby hike that was recommended to us by Sam, someone we met at James' birthday party in Mesa - Devil's Bridge. 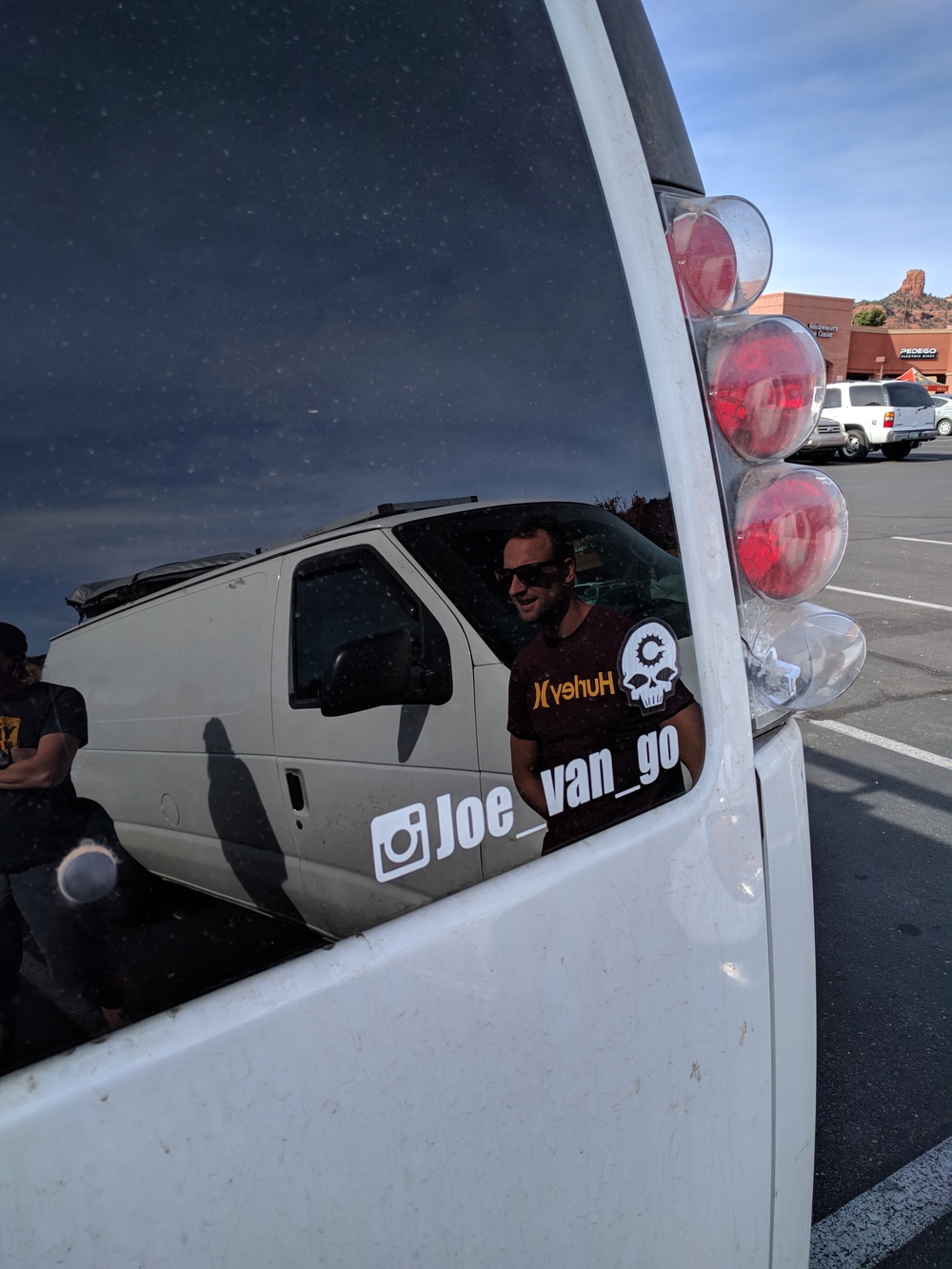 I was surprised to see the trailhead PACKED with cars, especially for a Monday. It was still somewhat crowded on the beginning of the trail but thinned out reasonably as we ascended. The views did not disappoint: 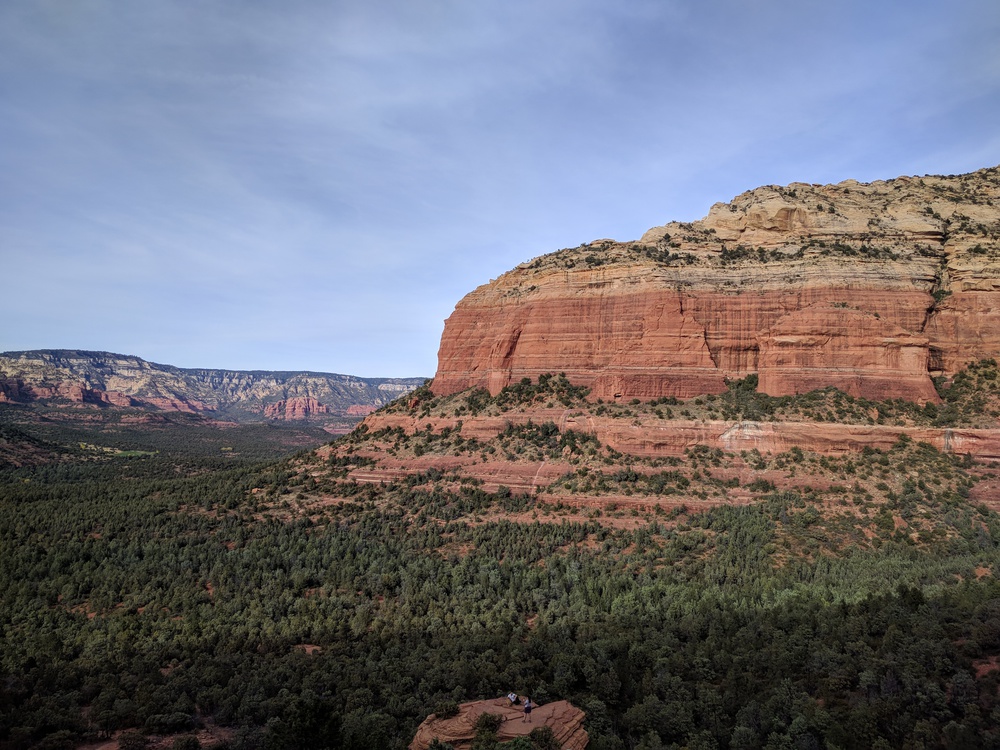 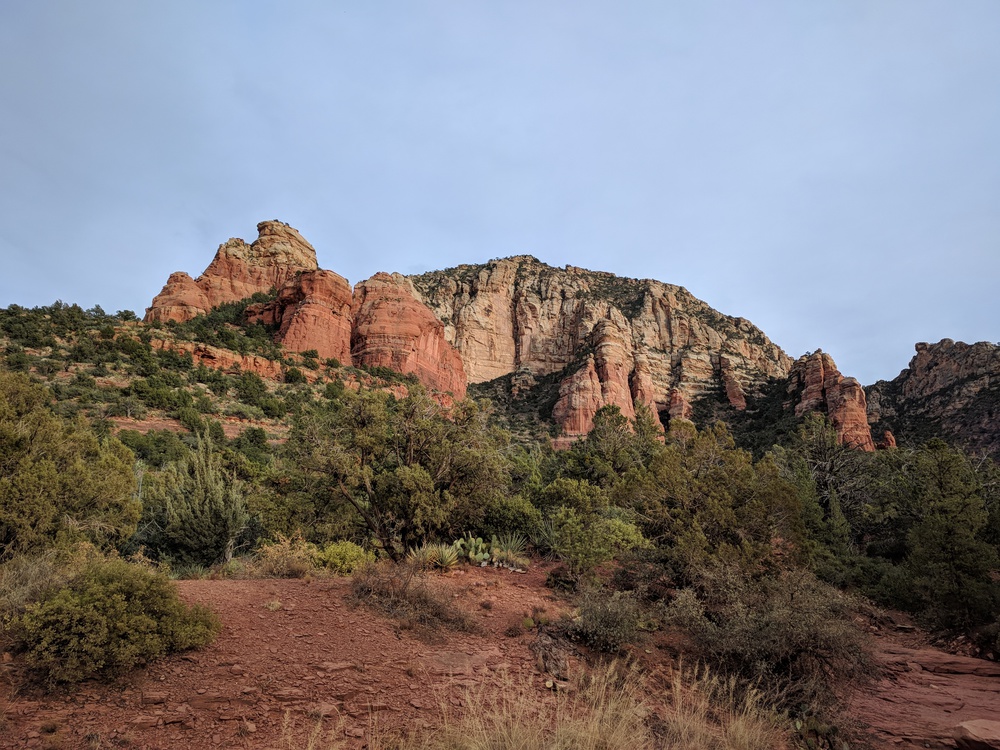 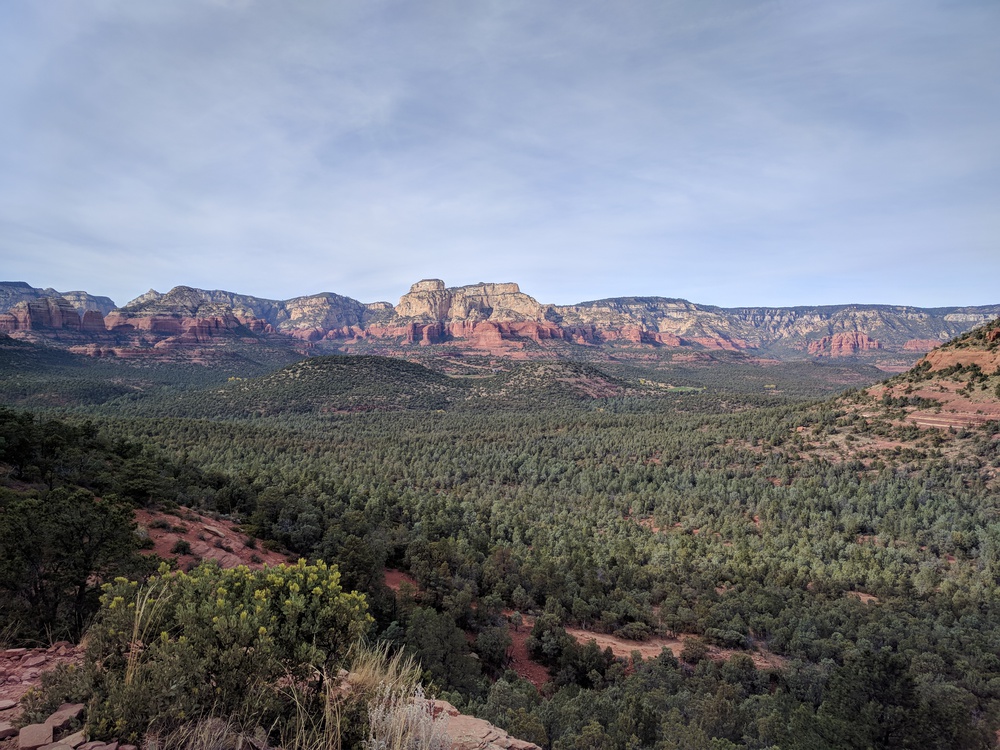 The Bridge was at the top of the trail, a rock arch that offers an irresistible photo op. You don't have to go across (in case you are afraid of heights). 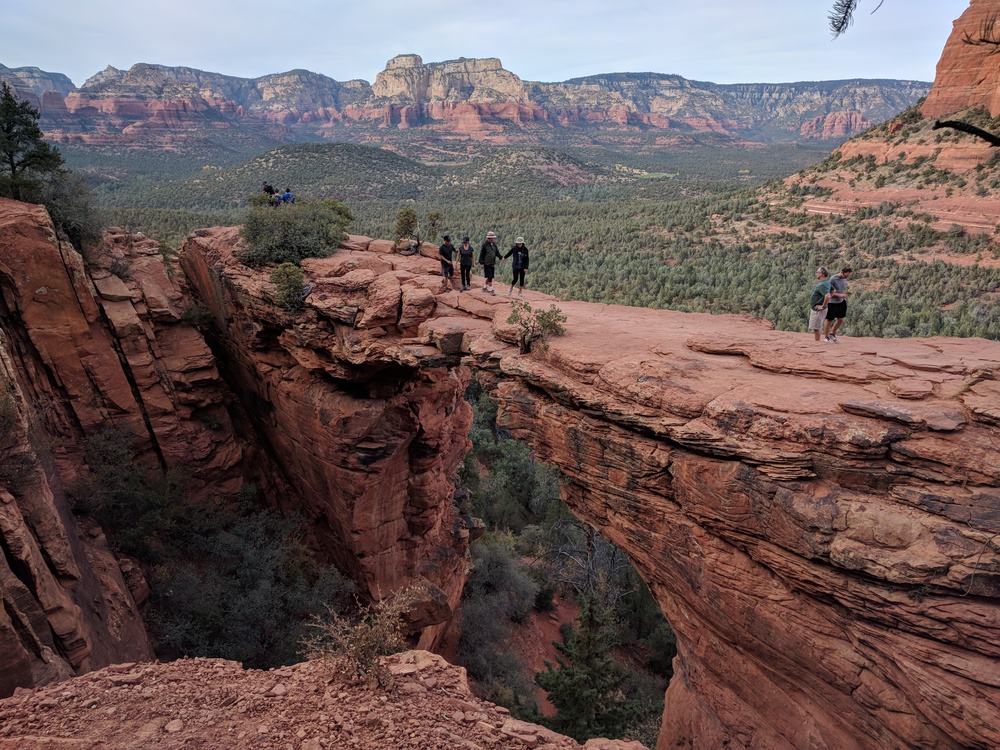 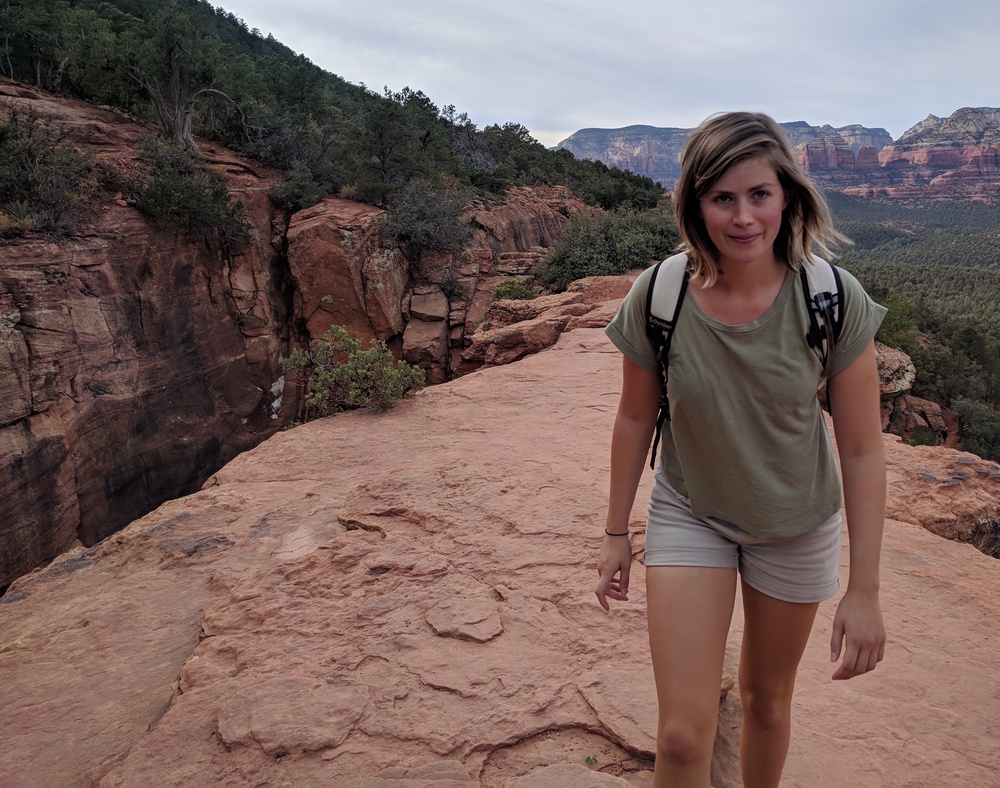 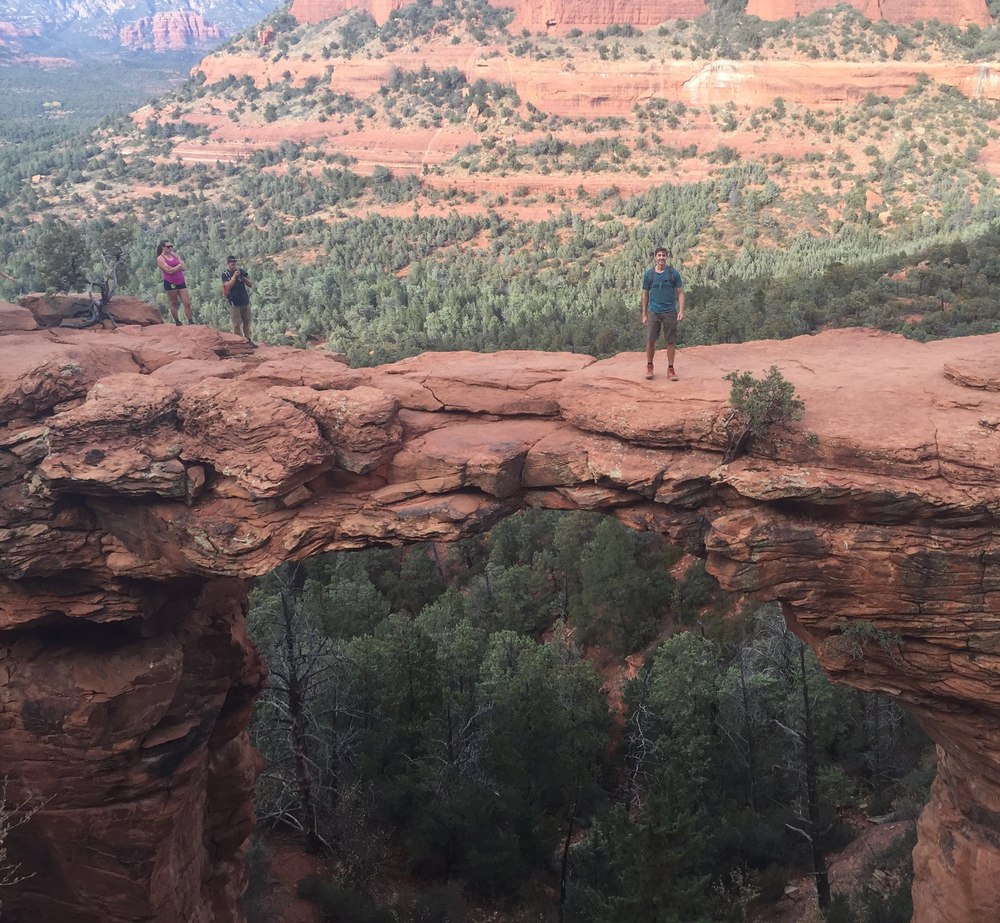 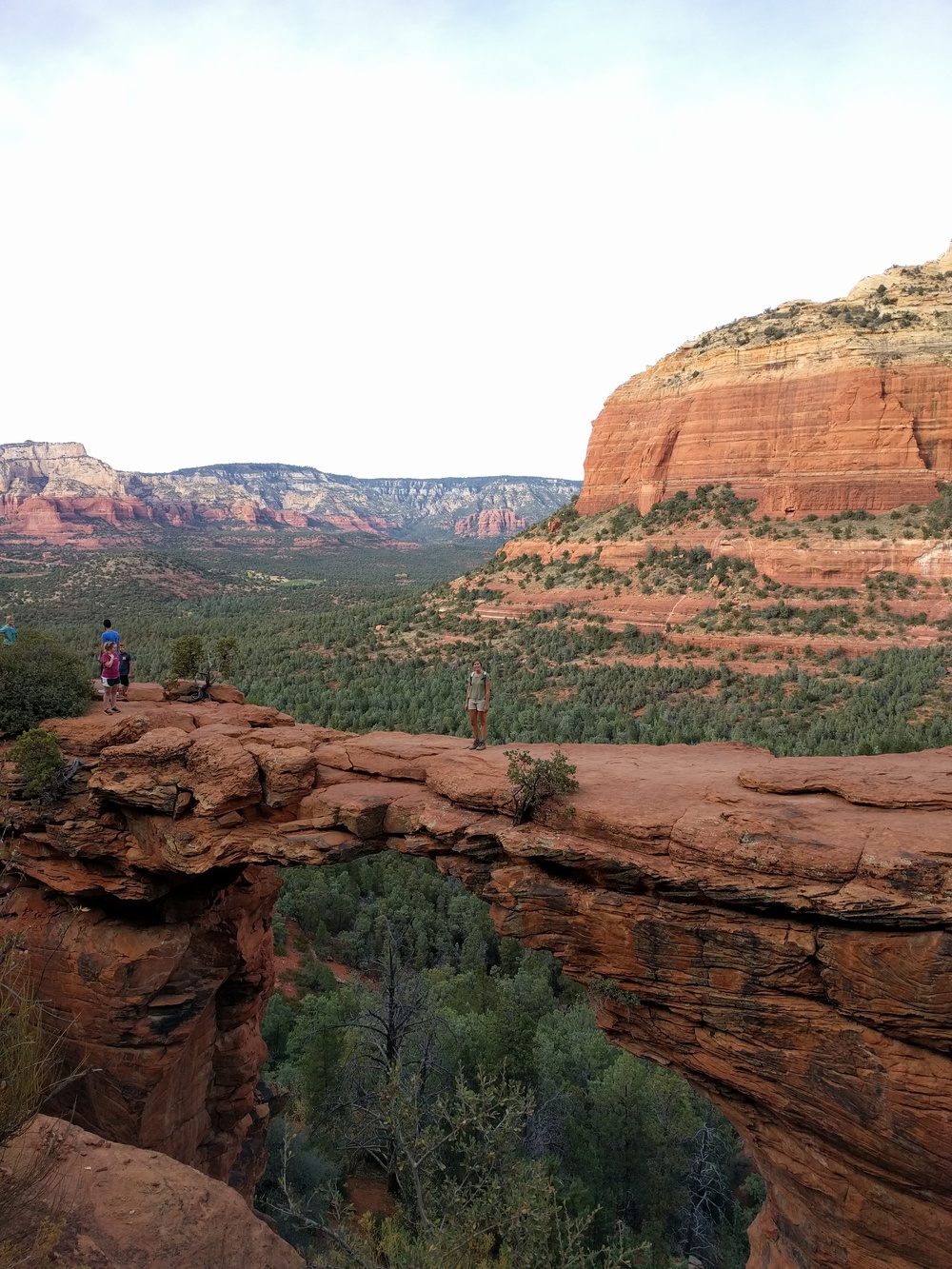 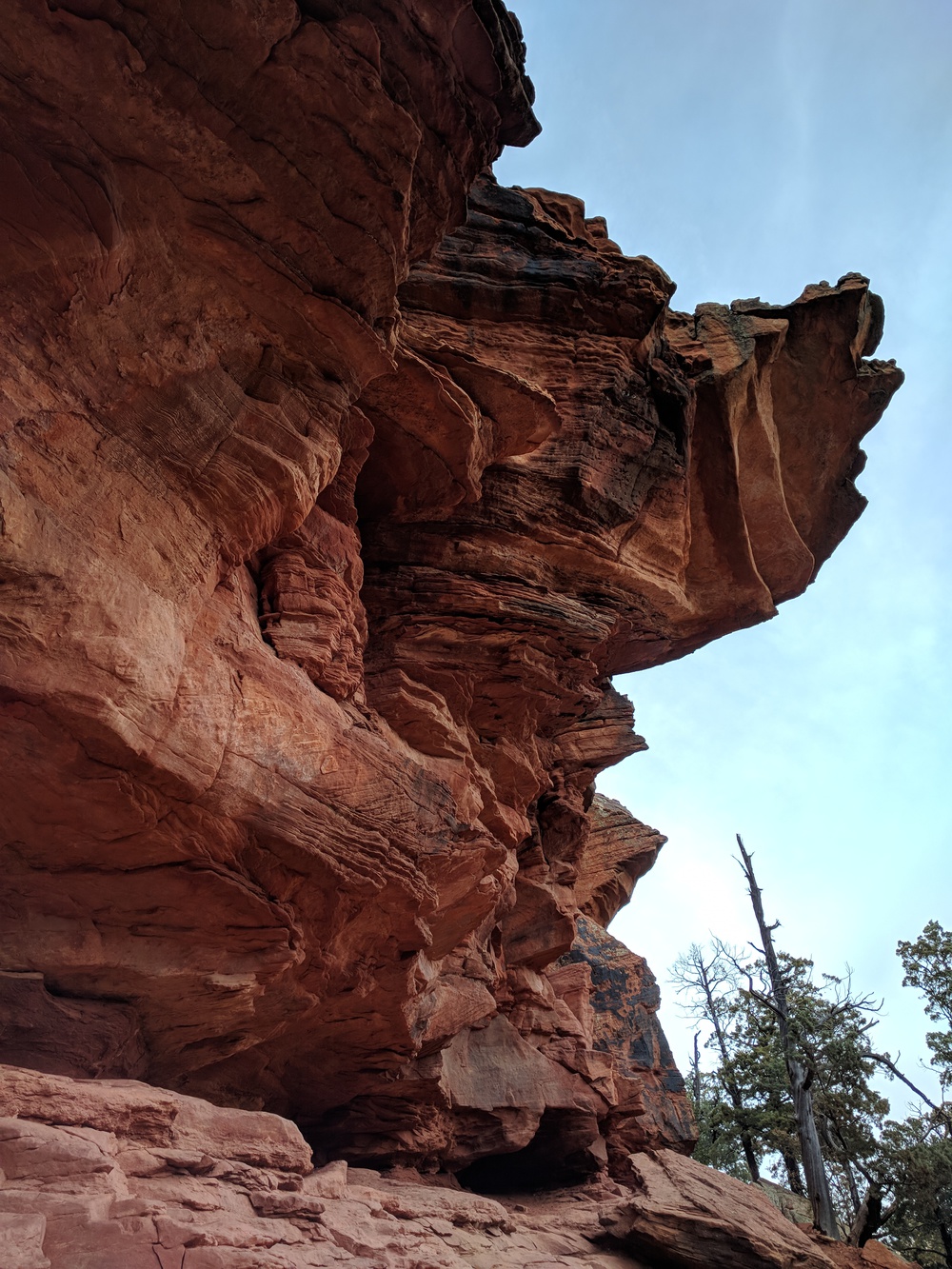 Resting at the top: 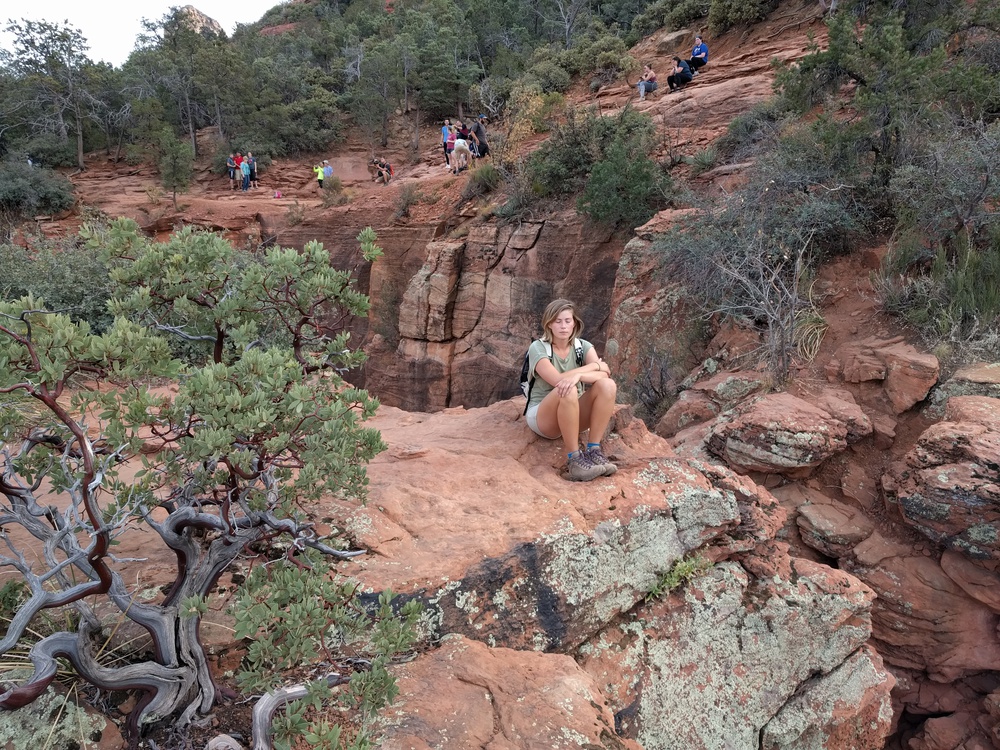 Sedona apparently has a reputation for being new-agey. On the way out I noticed a few interesting shops: the Mystical Bazaar, Sedona Crystal Vortex and the Center for The New Age. Dan has no tolerance for crystal magic and I think of it more as a passing curiosity. Thus, if I had been passing by on foot I might have stopped out of curiosity. But the aversion to the effort required in parking and getting out of the car sort of outweighs my interest.

The views driving into and out of town were magical enough for me – big red rock spires jutting out from the pine forest. It would've been nice to stay here a little longer. Just another place to add to the Where We'll Come Back To list.

That night we camped for free out in a natural area near the Montezuma Castle National Monument, what we intended to see the next day.

In the morning we got up and began to head out. However, I quickly realized something was wrong with me when I stood up out of bed and got all sweaty and lightheaded. I laid in the back and slept while Dan drove us. 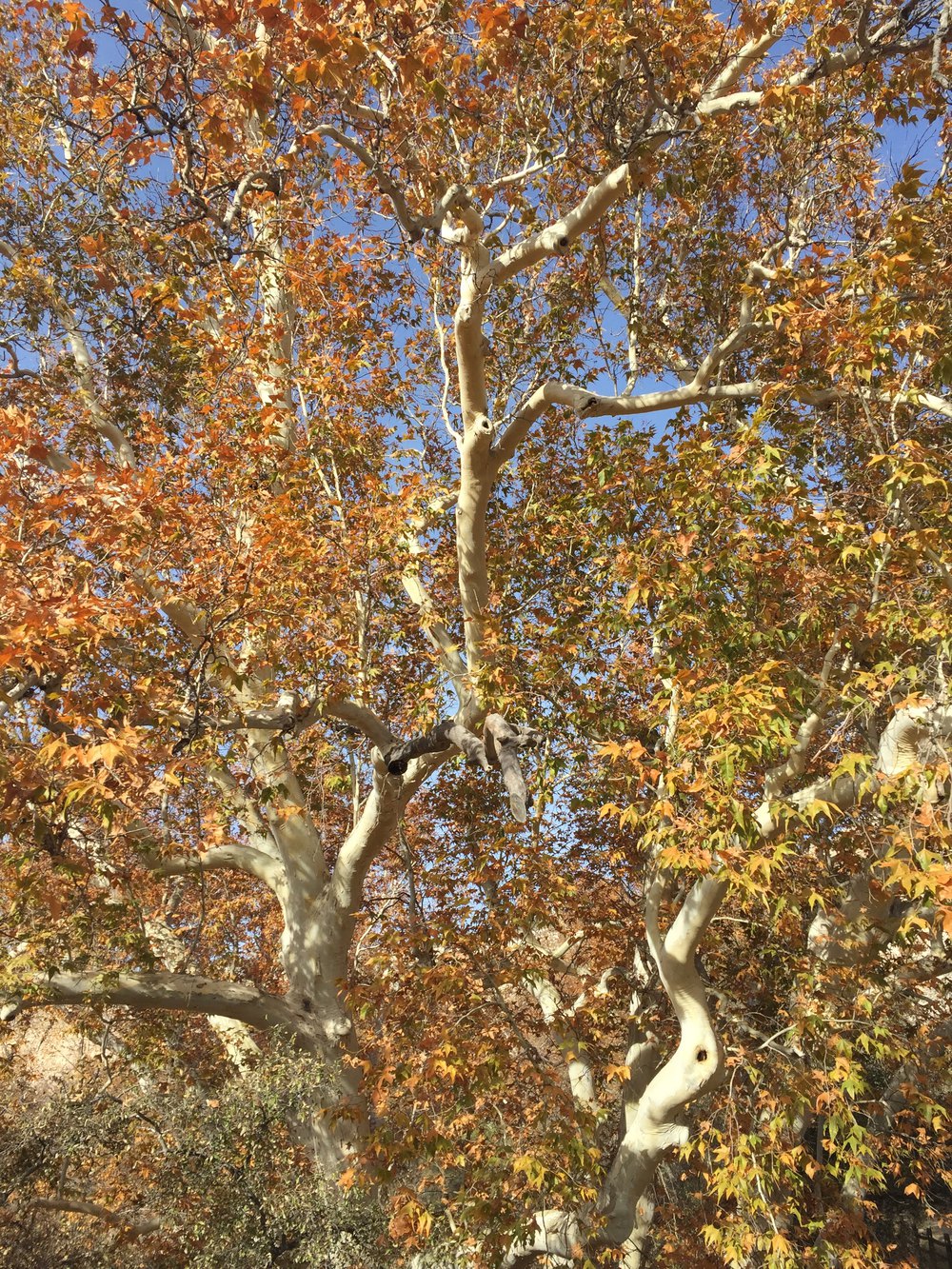 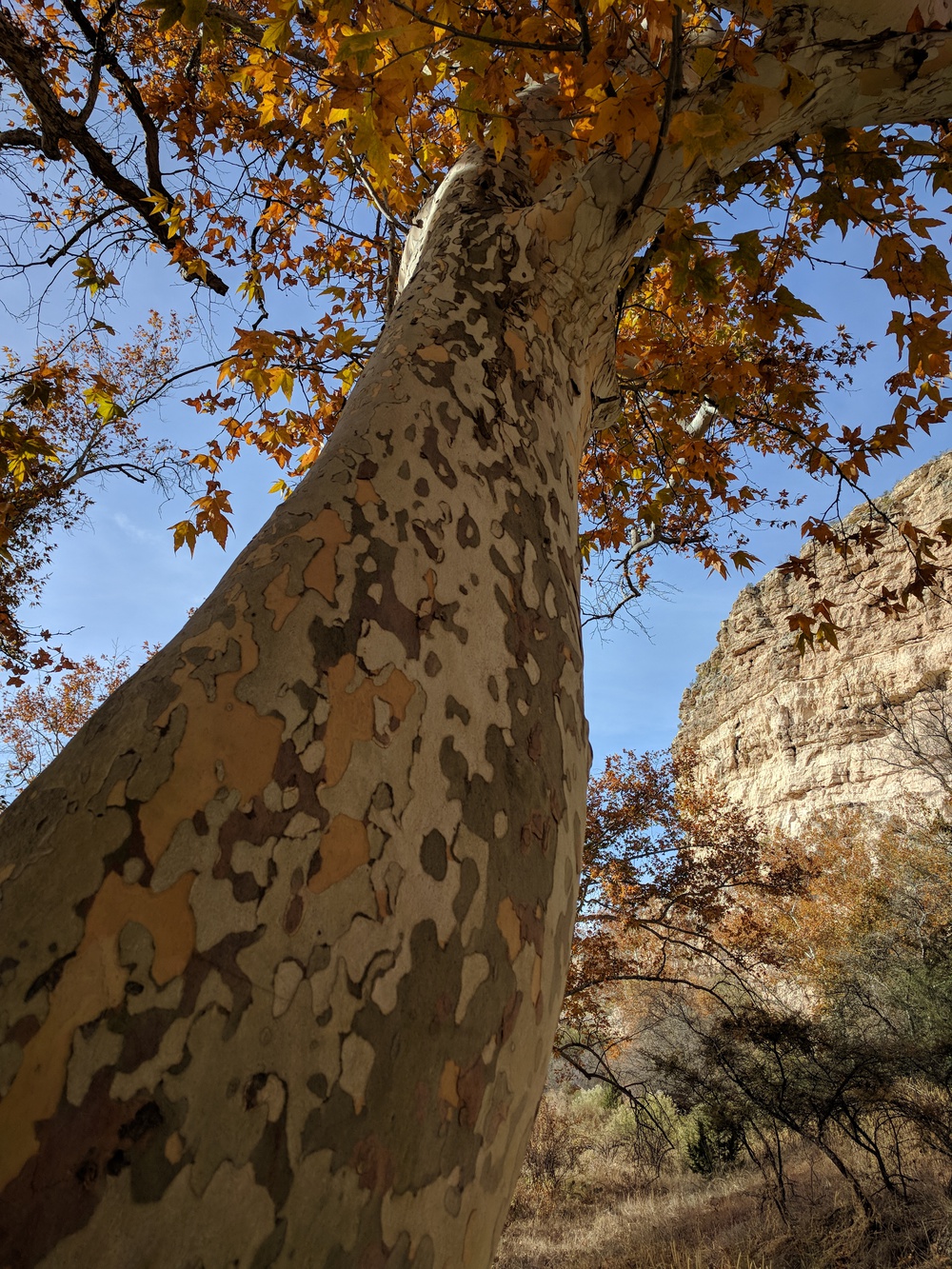 “Montezuma” is kind of a misnomer for the National monument – European Americans incorrectly assumed the cliffside dwellings were constructed by Aztecs, instead of the Sinagua people (closely related to contemporary indigenous people of the southwest US). The dwellings are thought to be constructed between 1100 and 1425 AD over the course of multiple generations. At some point the Sinagua packed up and left, leaving this twenty room structure behind. Historians aren't sure exactly why but “drought, resource depletion, and clashes with the newly arrived Yavapai people have been suggested." 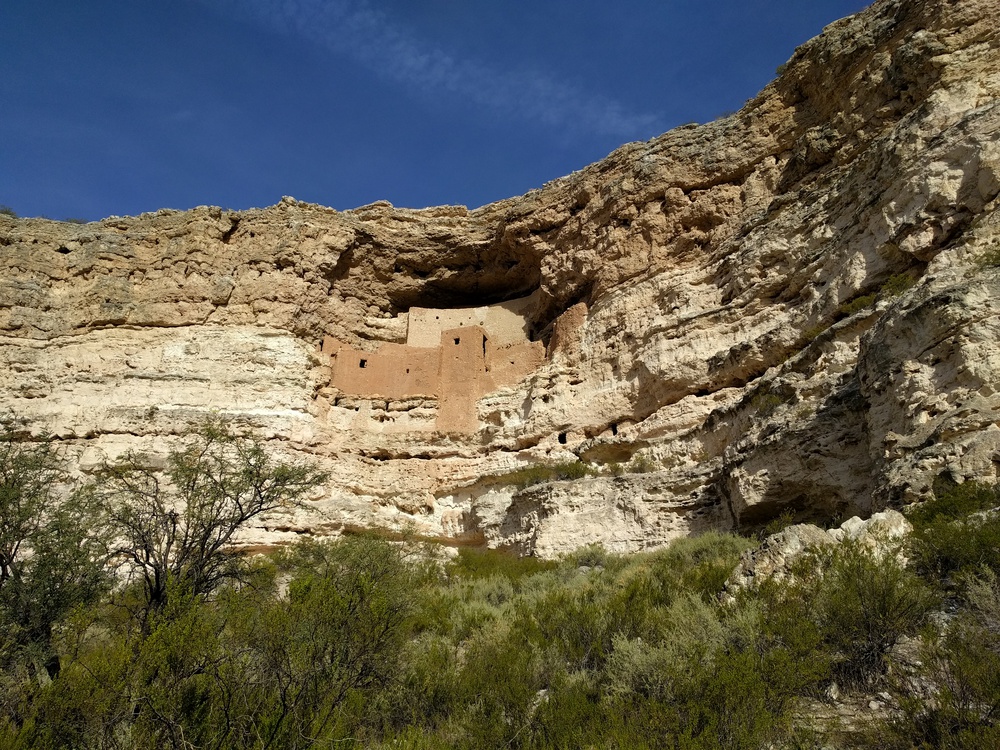 I wish we could've seen inside but it was still cool to see from the trail.

It was a beautiful fall day and I tried my best to enjoy it but still did not feel right. I slept on and off in the car until we made it to the Grand Canyon (yay!) later in the day.

Prev:  The last of New Mexico and Tombstone, AZ

Next:  Saguaros, and Visiting Family in Mesa, AZ