The Grand Canyon, as far as National Parks go, is about as busy as you'd expect. It reminded us of Yellowstone in the way that the park has had to build up infrastructure to support its enormous popularity. But, we found a parking spot near the South Rim trail and after a short walk we were rewarded with the view that brings everyone here. 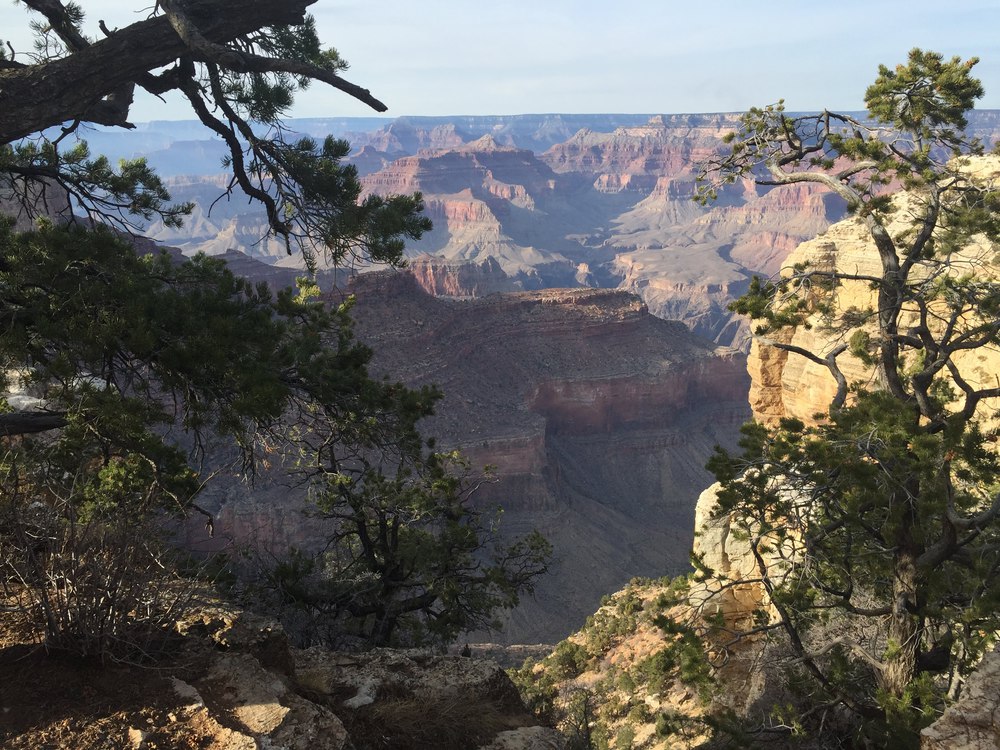 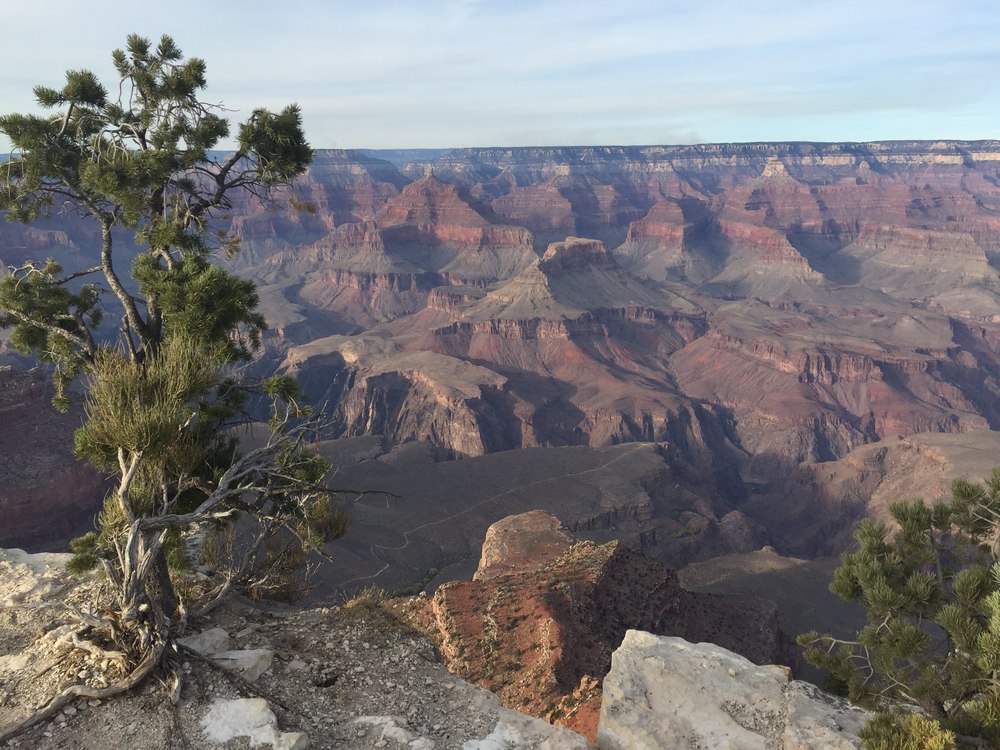 The only problem was that Rosie was still not feeling quite right. 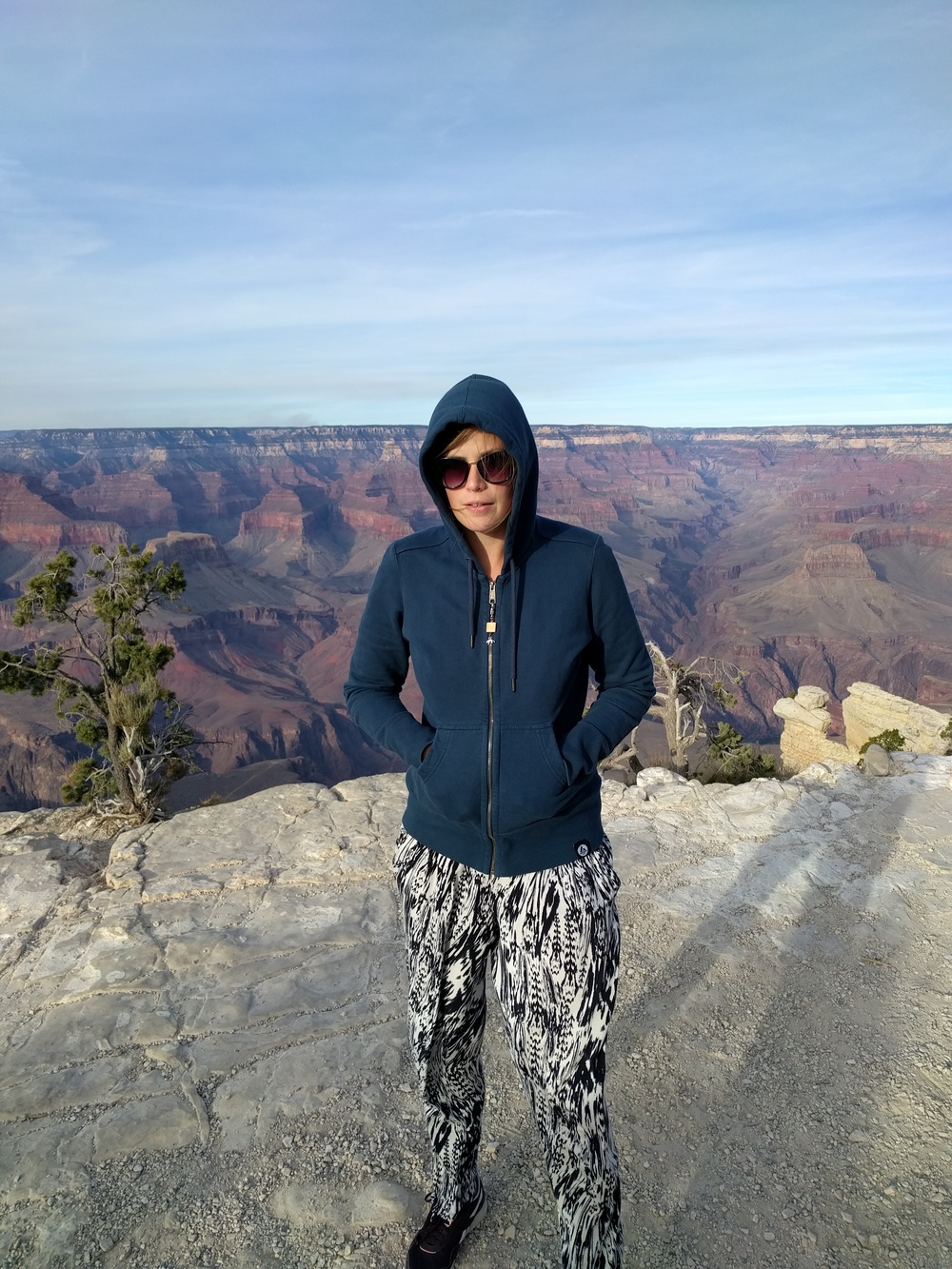 She toughed it out walking for a few miles on the paved trail, but pretty soon that bad pizza slice got the best of her and she had to duck into some bushes and hurl like the demonic child from the exorcist. Poor Rosie. I jogged back to the van and brought it around to a closer parking lot and we started making our way out of the park.

We made one more stop as the sun was starting to set at Moran Point lookout, further east from the busy main drag of the visitor center. I spotted this excellent looking sprinter rig with a German flag on the back, and kept my eyes peeled for the owners so I could get a chance to snoop inside. 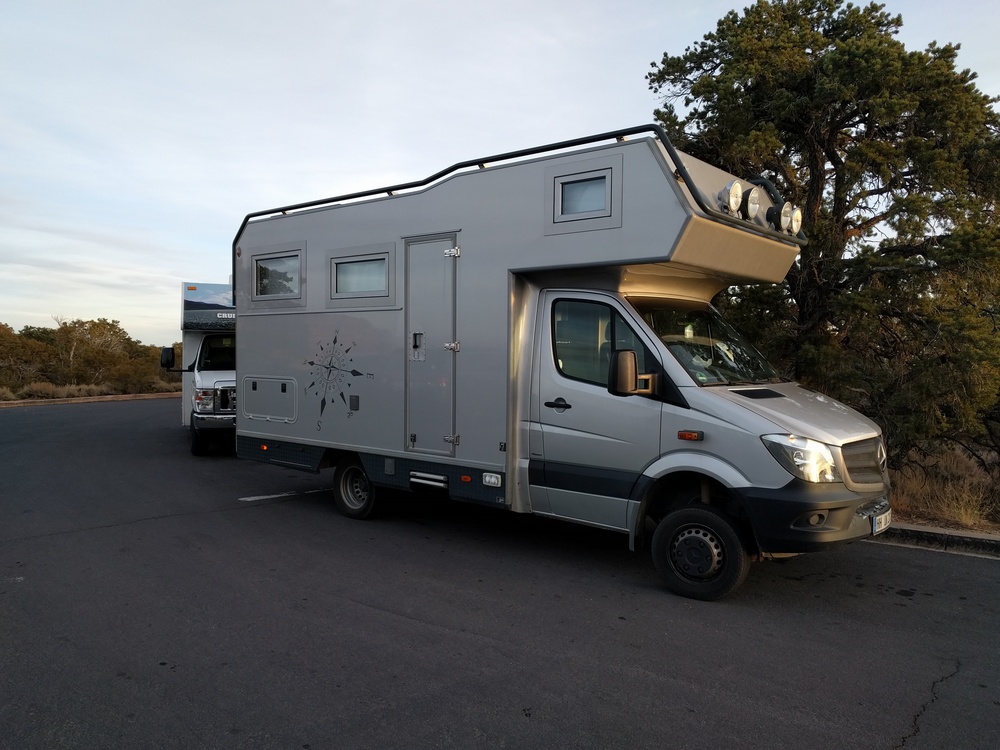 It was a good place to stop because there wasn't much walking and the view was great. Standing near the edge here really gives you that feeling in your stomach like you could really easily plunge to your death, which is what canyons are all about. Imagine sitting on that little triangular rock right here: 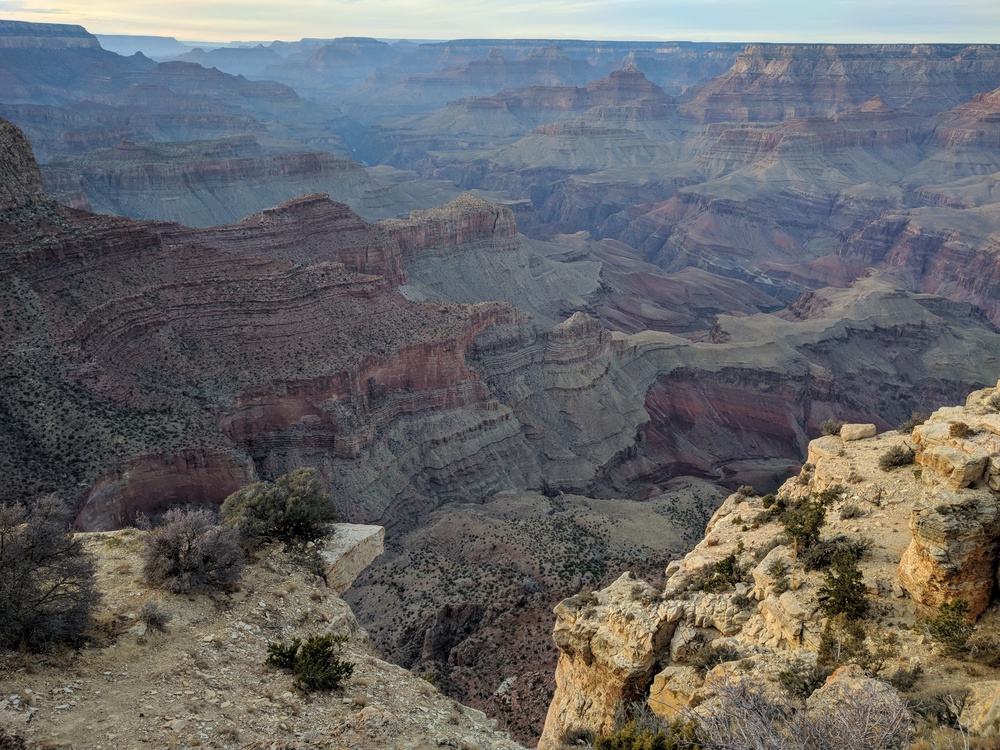 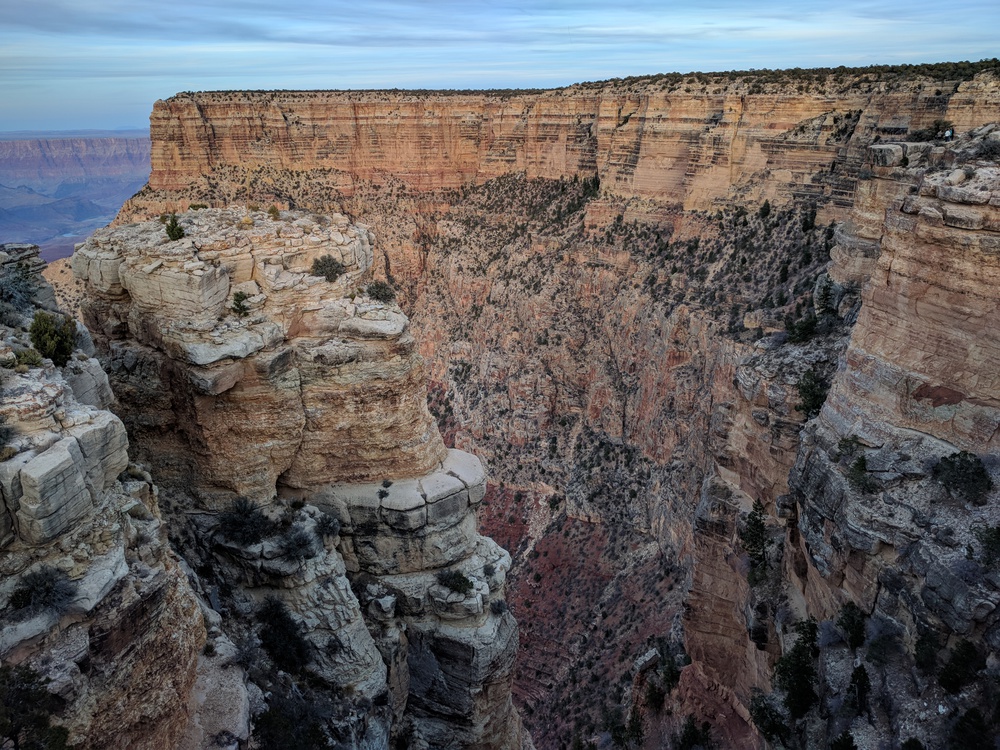 The only problem with this place was that there was a small mesa obstructing the panoramic view of the canyon. It almost seemed like you could climb out around it, but I wasn't sure that was a good idea... 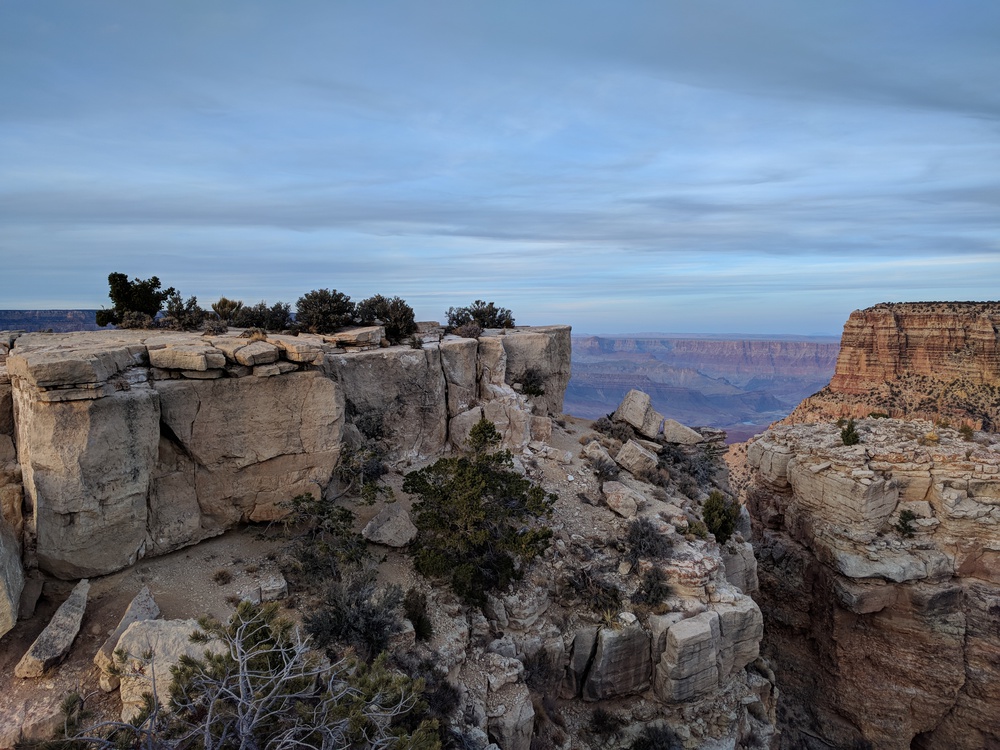 Luckily a few people more daring than I blazed the trail, and I followed them. We got acquainted quickly on the cliff edge while helping one another through a sketchy gap, all of us feeling pretty nervous about shimmying out here, and knowing that we'd have to shimmy back. 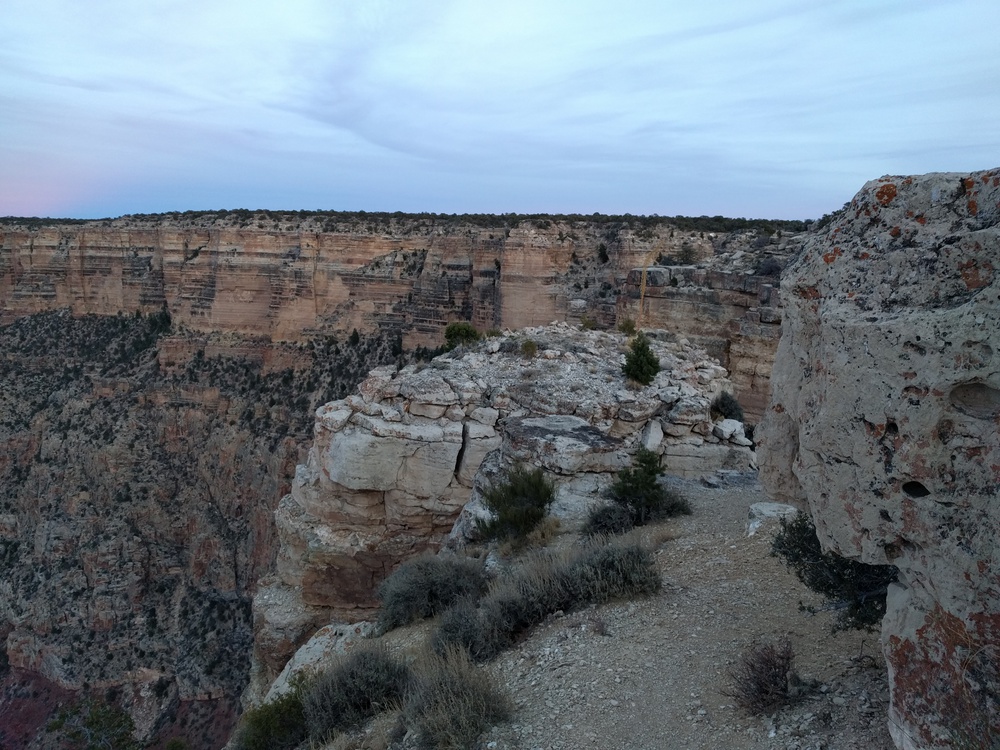 I noticed pretty quickly talking to my new friends that they were Germans! Not the owners of the cool rig though, it turns out. They were all exchange students checking out the American southwest while they were in the country. I'm glad none of us died, and that someone was there to take my picture, because Rosie was in no condition to do cliff-shimmying. 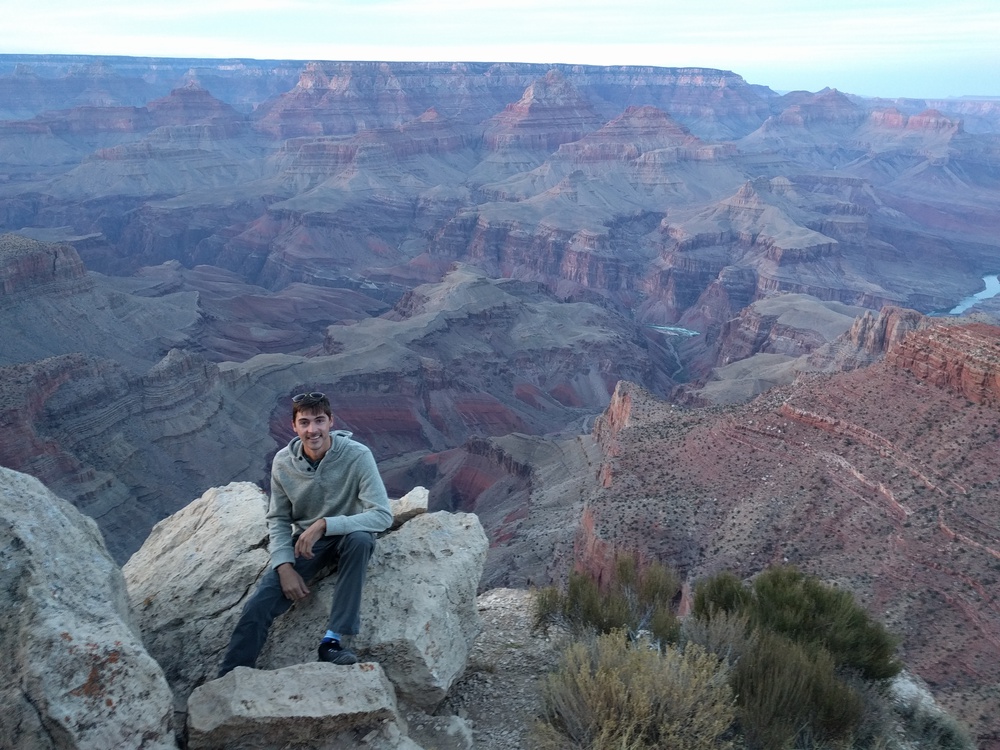 Ultimately I was glad to have decided to venture out and get the unobstructed view of the sunset. It was a good one. 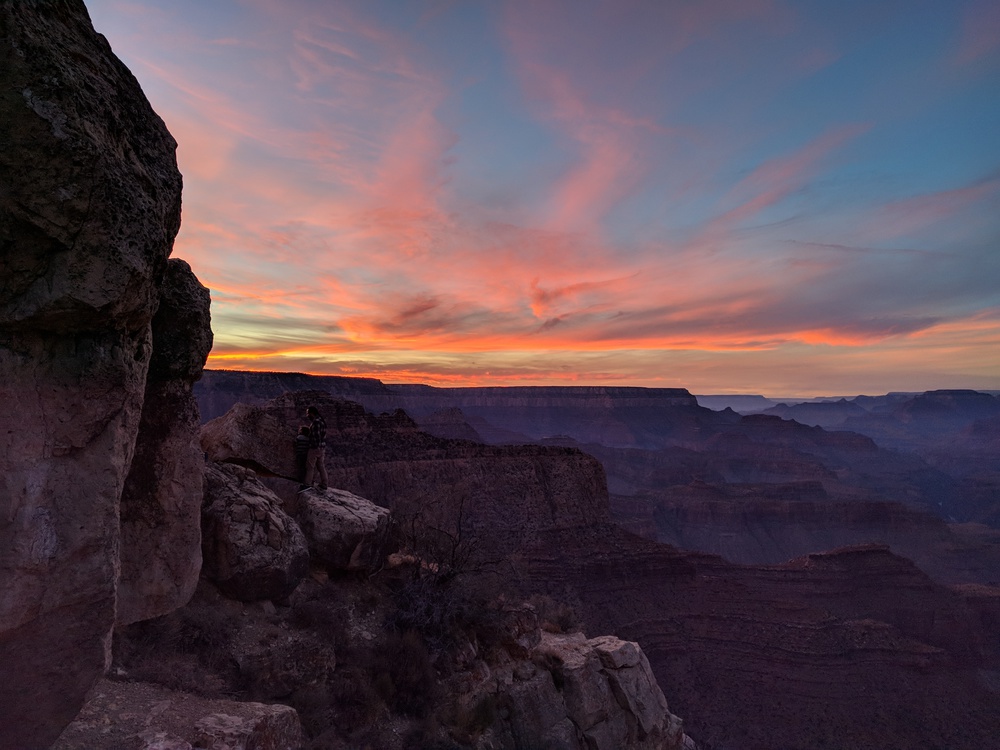 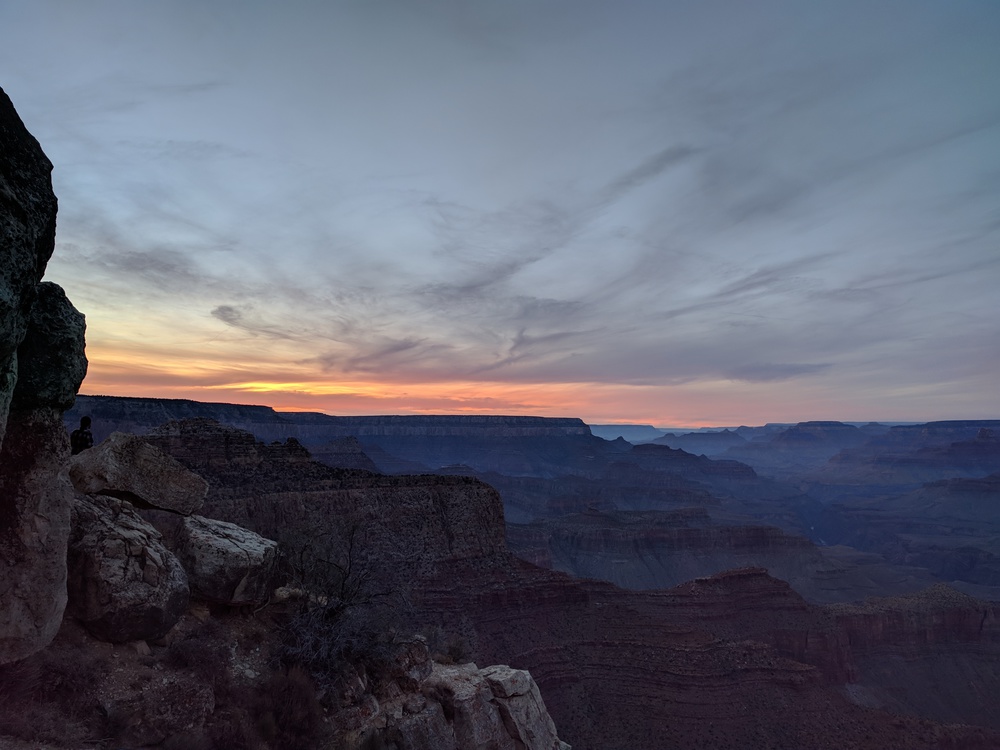 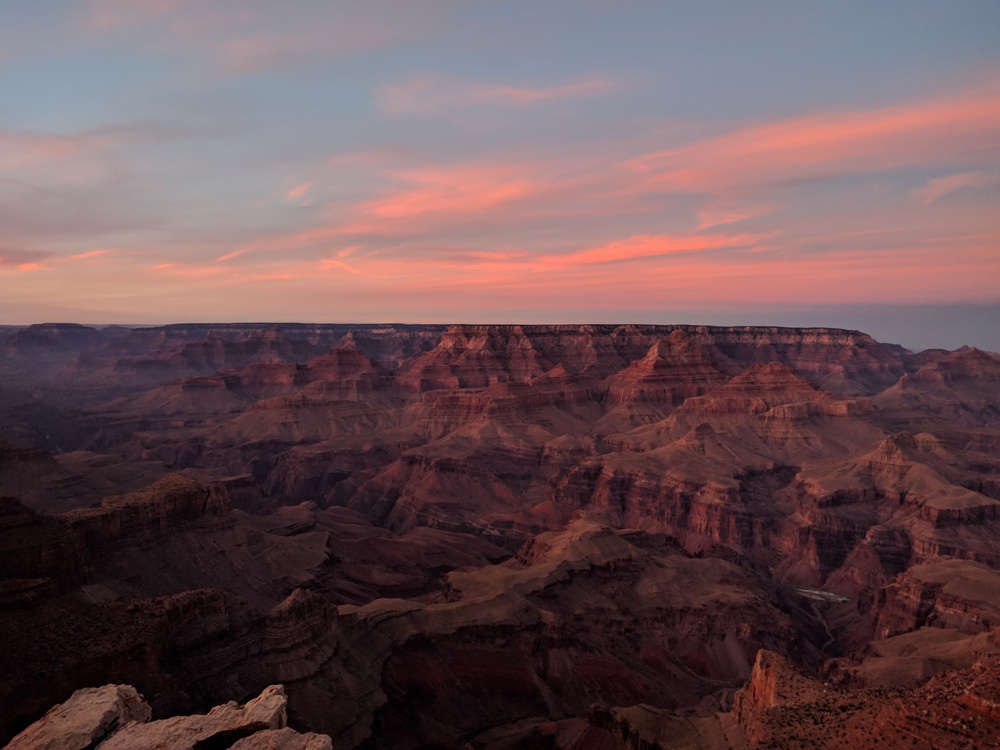 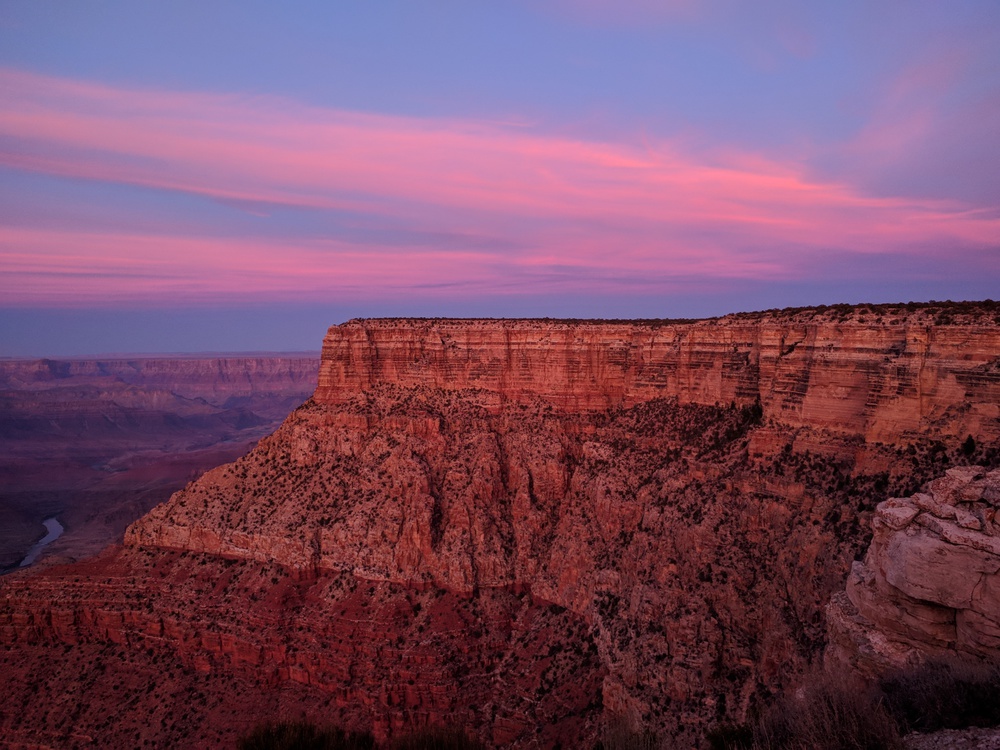 We made our way back while there was still some light. 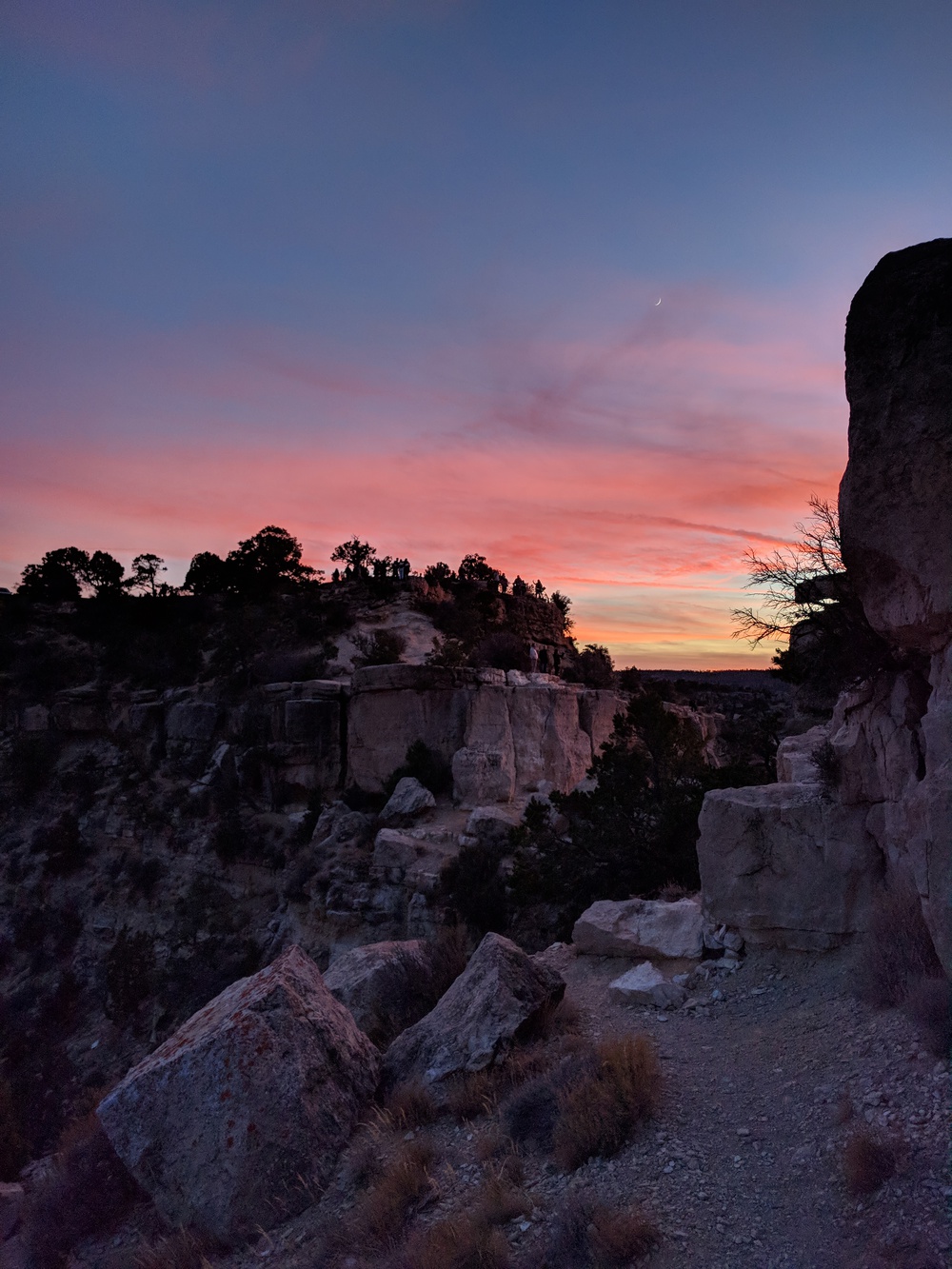 Back at the van, we found a free place to park for the night not too far outside the park, in a vacant lot behind a gas station. A nearby burger king had wifi with a signal just strong enough to log on and finish the last few episodes of Stranger Things. A good way to end a long day for Rosie. The next day we left this canyon for the next ones on our list: Bryce and Zion, in Utah. 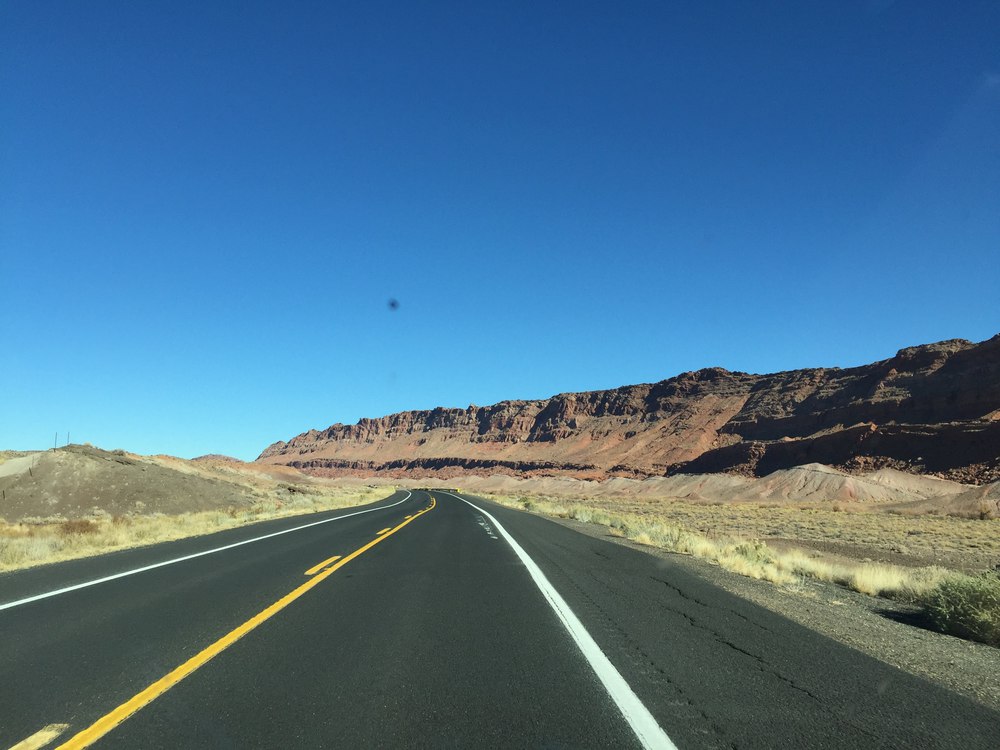